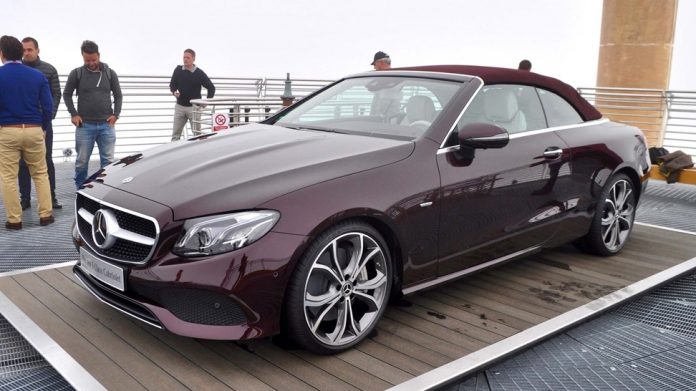 When you go to a 5 star restaurant, you expect a great steak – but it’s surprising when the bill turns out to be reasonable.

The Mercedes E400 cabrio is like that great steak you thought would cost more than it turned out to.

It’s actually a better steak than the car it most directly competes with – BMW’s 6 Series cabrio – if you go by objective measures such as how much engine – and how much room –  you get. 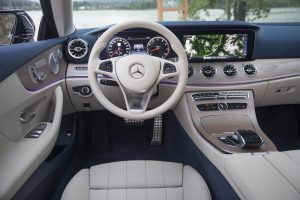 Which makes it all the more enjoyable when the bill arrives.

Because the Benz will cost you not just thousands but tens of thousands less than the BMW.

Which is like getting a grass-fed Wagyu for the price of a corn-fed piece of past-due stew meat. 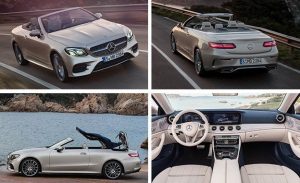 In addition to the two doors and the power soft-top, it is also kitted out somewhat differently than the E400 sedan. For example, it comes standard with the twin-turbo V6 that is optional in the E400 four door.

The cabrio – and coupe –  get almost all of the updates the E sedan/wagon received last year. With one exception. For the moment, at least, the E400 coupe and cabrio come only with one engine – the twin-turbo 3.0 liter V6 that’s optional in the sedan/wagon. Unlike the other versions of the E, there are no optional engines. 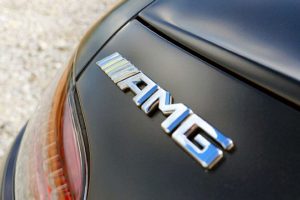 This means you can’t order the amped-up AMG version of the V6 – or the AMG V8.

One or both of the AMG engines may become available later next year in the coupe/cabrio. Mercedes ins’t saying.

The $20k you’ll still have in your pocket.

The stronger engine you’ll have under the hood.

The four more inches of backseat legroom your passengers will have. 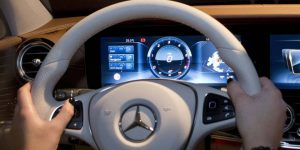 BMW 6 cabrio is available with a V8.

Benz cabrio not even available with AMG V6.

Mileage – and range on a tankful – drops a lot when you opt for AWD.

Price does not include a teenager to help you sort through all the touch/swipe/tap technology. 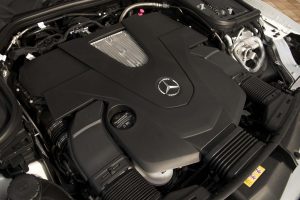 The pair of turbos hanging off the V6’s exhaust manifolds is responsible not just for the wealth of low-end torque but the immediacy of it. Instead of just one big one – that takes a moment to build up boost – two smaller (sequential/staged) turbos are used to get the boost building as soon as the engine is running – with very little revving necessary.

Other manufacturers – including BMW – follow the same practice and get similar results.

The 6 Series convertible’s standard  engine – which is also a six and also 3.0 liters but in-line rather than in a “V” configuration – has a pair as well. But both its horsepower and torque numbers are lower than the Benz’s – 315 hp and 330 ft.-lbs. of torque.

In the BMW’s favor, the lesser peak torque output of its six cylinder engine is available at an even lower engine speed – just 1,300 RPM. Almost no revving is required to get your hands on it.

Still, the Benz has more of both horsepower and torque – the things that determine how quickly you get to 60. And so it gets there more quickly than the BMW: 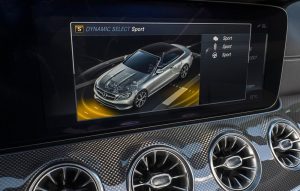 The power feeds through a nine-speed speed automatic with driver-selectable modes (these also include chassis settings that can be configured individually to suit) and you can go rear-wheel-drive or all-wheel-drive (4Matic).

The rear-drive 640i, meanwhile, rates 20 city and 29 highway and even with the optional xDrive AWD system, the needle hardly moves leftward at all. The 640i xDrive rates 19 city, 28 highway. Its highway figure is 8 MPG higher than the AWD-equipped Benz’s. 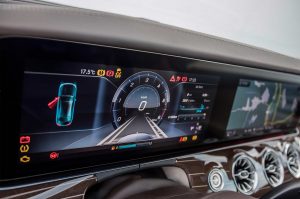 That is no small difference.

While the cost of gas is largely an irrelevance when we are talking about cars upwards of $60k, how often you need to stop for gas is not. 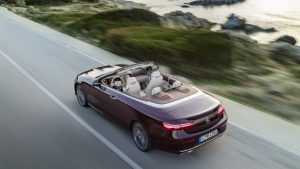 How much is enough?

Mercedes decided – apparently – that the E sedan’s 2.0 liter four was not enough for the E400 cabrio – which makes sense, given the cabrio’s greater curb weight. Cars in this category – in this price range – are expected to effortlessly out-accelerate cars in lesser categories.

With an extra couple hundred pounds riding along – the weight of the extra bracing to make up for the absence of the structure a metal roof would normally provide – a couple extra cylinders fills the bill. No worries about coming up short against a V6 Camry, for instance.

But there are also intangibles to consider. 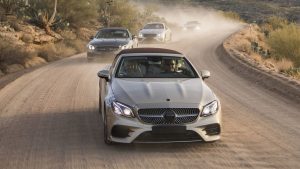 Modern turbo fours are rarely weak and many make as much power as V8s did as recently as the early 2000s. But even when they are strong, they don’t sound right. This has been an issue for the BMW 5 – which is the sedan basis for the 6 Series coupe. It comes standard with a 2.0 liter four now – the six relegated to optional status (it’s standard in the 640i convertible, same as with the Benz).

The issue isn’t power per se but rather wrinkled noses about the four’s audibles. The BMW 5 sedan is a big (and big-priced) sedan. People who pay big money expect a bigger sound than a two liter four can make.

And this is much more of an issue in a convertible.

With the top down, you hear more. And if what you’re hearing isn’t right – it’s a problem. Particularly in a car int he $60k-plus class.

Hence the six. Which sounds righteous. Feels it, too. That torque – almost 100 ft.-lbs. more of it – drops traffic as nicely as the top drops. 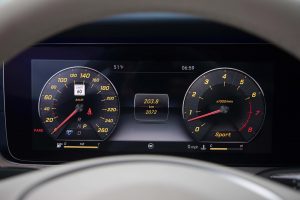 You can ramp up the aggressiveness of the engine/transmission (and suspension) via the toggle switch on the center console. Or, dial it back. The range runs from Comfort – the most subdued and softest – to Sport+ – the  . . . sportiest. This can be complemented visually as well via the configurable flat screen main instrument panel. Three different gauge clusters are selectable, along with an entire spectrum (64 colors) of ambient mood lighting.

Which brings up when to drive the E400.

Night time is the right time.

The E’s cabin is bathed in the backlit glow of whatever color you like, accenting the ethereal glow of the flat screen main and secondary instrument panels. Warmth cascades over the art deco-looking air vents and dapples the leather, which would make the most depraved Roman emperor lick his lips with envy. If you’ve ever experienced The Egg – as in the first-class airplane Egg – then you will feel very at home inside the E.

Same intimate personal space; this car is yours – a refuge from the world outside. 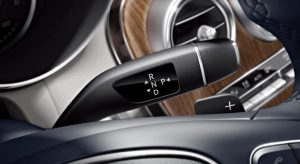 You engage the V6 by gently tapping the steering wheel-mounted toggle shifter down. This gives you Drive. Up for Reverse. Press the button at the end of the stalk for Park. An available holographic Heads up Display projects vital info over the hood, in your line of sight. And the sight over that long, graceful hood – with the retro-themed twin vertical speed humps pressed into it – is a very pleasing sight.

With the top down, you’ll be amazed how little your hair gets mussed – which you may not care about if you’re a dude but if you’re not, you might. Airflow is managed by Mercedes Aircap deflector system. 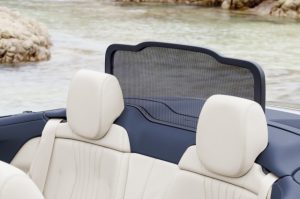 With the top up, it’s easy to forget it’s a cabrio – because the top fits snare-drum tight and is multi-layered and sealed. An option worth the money is Mercedes air scarf  system, which provides heat around your neck/upper body – and which makes it not just feasible but comfortable to drop the top on chilly days.

You have your pick of Sport or Luxury configurations, which are configured – obviously – for more sportiness (more aggressive tires/different wheels) or comfort (softer suspension tuning; tires designed to be more compliant and quieter rather than corner-biting).

You’d expect – based on historical precedent – that the Benz would be somewhat less an athlete than its BMW 6 Series antagonist. But it’s not so. There are even objective measures to quantify this, such as the E’s tighter turning circle – 37.5 feet vs 38.4. The Mercedes also sits lower to the ground – 4.2 inches of clearance vs. 4.8 for the BMW – and this hunkered-down posture tamps down body roll when you’re rocking through the esses. 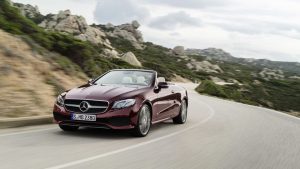 The only thing missing – if you’re a hoon – is more hp. The E is plenty fast as it is.

But more speed is never a bad thing. 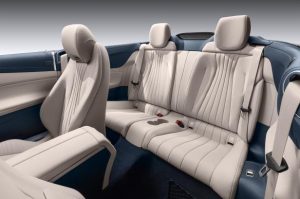 The hair in the convertible soup – usually – is room for just two.

Notwithstanding the presence of four seats.

For the driver and front seat passenger it’s fabulous. For those in back . . .

Unless they’re in the E cabrio’s back seats.

And all the more striking because the 6 cabrio is actually slightly longer overall than the E cabrio: 192.8 inches vs. 190 even for the Mercedes. Both cars have nearly the same space up front – 41.8 inches of legroom vs. 42.1 for the BMW as well as virtually identical (and not much) trunk space: 11.5 cubic feet for the E and 11 even for the BMW.

That is typical of convertibles, which are rarely practical cars. But the livable back seats in the E set it apart. 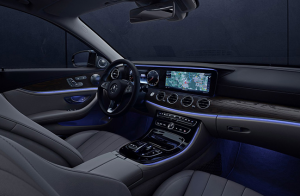 The flatscreen main gauge panel is optional but the secondary 12.3 inch LCD touchscreen for the infotainment system is standard equipment. You can order fast-heat seat heaters and heated arm rests, upper door panels and steering wheel – luxuries that Mercedes first offered in the six-figure S-Class but which are now available in the more accessibly-priced E-Class. The flatscreen gauge cluster and 12.3 inch LCD secondary touchscreen are also very similar to the panels in the much pricier S-Class. 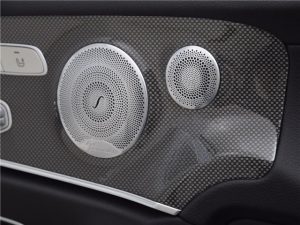 Another thing-in-common with the S is the available Burmester uber-premium surround sound audio rig. There are several choices, actually. These systems have to be heard to be believed. You can crank them up to full volume – and experience no distortion.

Audio systems of this grade are among the things which still clearly separate the run-of-the-mill cars from the special cars.

Just two things you can’t get in the E that are available in the S – and the four-door versions of the E: 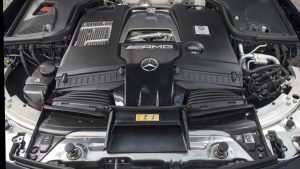 It’s hard to grok Mercedes’s thinking here. The coupe/cabrio are the sportiest body-styles, after all. Why limit the hottest engines to the sedan? And why leave the field to BMW – which does allow one to purchase a V8 in the 6 cabrio? 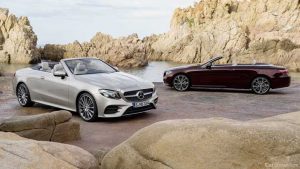 The savings Mercedes has put on the table for the E cabrio vs. the regular 6 cabrio is take-your-breath-away. Both of these are gorgeous cars; amazing cars – the kind of car you buy as a reward for serious hard work.

But when you can buy one of them for $20,000 less – and not only not give up anything in the bargain but get more in the bargain… .

How do you complain about that?

AGW Gets Blue Discount for Pederasty