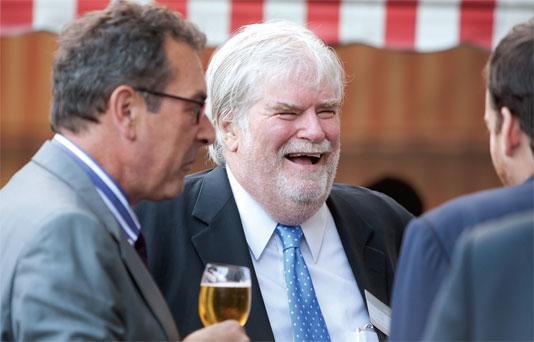 Car journalist were – once upon a time – car guys. They were not Safety Nags, indistinguishable from Ralph Nader or Joan Claybrook.

Today, they are indistinguishable. Might as well be Ralph. Or Joan.

Keith Crain, for example. He is the editor of Automotive News – which isn’t really. It would be more accurate to style it, Automotive Hate – because Crain doesn’t much like cars or driving them.

And wants more of it to be mandated. Automated emergency braking, for instance. This is technology which uses radar or other proximity sensors to detect another car or object within the orbit of a vehicle; if the driver does not brake when the computer/programming thinks he ought to brake, the computer/programming will apply the brakes automatically. Peremptorily. Usually when there is no need to do so – the object in the path of the vehicle being (typically) astronomical units distant.

The system is set up to brake like a glaucomic old lady with no depth perception or capacity to judge time-distance relationships might.

This, of course, is all accompanied by frantic flashing lights and beeps. The system cannot be switched off.

“This technology has not only been developed, but it is offered on many vehicles today. The National Highway Traffic Safety Administration and Insurance Institute for Highway Safety have a voluntary agreement with 20 automakers to standardize automated braking by 2022.

In my opinion, if an automaker has developed automatic braking and can install it as an option, then it can make the technology standard on all its vehicles.

I don’t know of any company that offers as optional equipment seat belts or airbags or any of the other life-saving devices that have been developed over the years.

There is something wrong with a company having the ability to save lives and choosing not to do so. The driving public deserves all the latest safety systems available.

The government will eventually mandate such systems anyway. Car companies that do not offer these systems as standard are making a big mistake.”

Try to imagine a car journalist – Brock Yates, for instance – urging such a thing. As opposed to this porcine pile of authoritarian collectivism.

The most amazing thing, though, is how unconscious this Crain guy is about his Coercive Wet Nursing. It is a measure of just how saturated the culture has become with both coercion and wet nursing.

The casual insolence of the dude is absolutely halting.

You don’t get to choose. Crain, et al will simply decree. You, of course, get to pay.

How does he differ from other coercive utopians, such as Ralph and Joan? What is the point of having “journalists” such as Crain, who might as well be Public Citizens like Ralph and Joan?

The ironic thing – which probably does not occur to Crain, et al – is that their amen-cornering of coercive utopianism is why the car industry is dying. Why their jobs will go away along with it.

Coercive utopianism has sucked almost all the joy out of owning and driving cars; it has transformed them into anodyne appliances that are burdensomely expensive to buy and repair and beyond the ken of most people to tinker with.

They’re not much fun anymore, second-guessing almost everything you do. Buzzers beepers, cautionary warnings. Intervention when you don’t want it and didn’t ask for it.

They are suffused with peremptory, least-common-denominator idiot-proofing of the sort urged (at gunpoint) by guys like Crain, who then wonder why people are losing interest in cars as well as reading about them.

I may be the only car journalist left who likes cars – and loathes guys like Crain. Who does not view them as things to be sucked dry of all personality in the name of saaaaaaaaaaaaaaaaafety.

Who figures that if there is a market for something –  then the market will provide it – and at a price that those who want it are willing and able to pay. That it ought to be up to you – not me. That it is most definitely not the role of tubby not-so-little busybodies like this Crain character or anyone else to make those decisions on your behalf and without your consent; much less contrary to your consent.

As Crain himself observes, “. . .  only 1 percent of registered vehicles on the road today have automated emergency braking.”

What does this tell you, Keith?

It tells me that most people do not want automated emergency braking.

Just as – some 40 years ago – most people did not want air bags, either. Back then, it was Ralph and Joan who were furious about that – and urged that people’s decision to say “no, thanks” be rescinded and countermanded; that they be forced to accept a different decision – and pay for it, too.

Today, Ralph and Joan have been replaced by guys like Crain.

There is no car press anymore. There is a metrosexualized echo chamber for the EPA and NHTSA and the insurance mafia. Ralph and Joan and Keith are the same hermaphroditic homunculus.

It is of a piece with the transitioning of the car industry itself from a business that was in the business of designing and selling cars and driving to one that sells “transportation.”

What Would CISPA Mean For You?