I know exactly what happened that night because I have been paying attention to the liberal media! 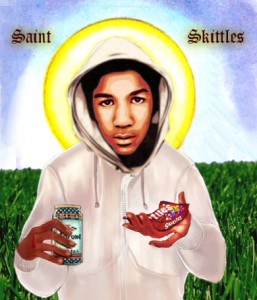 9-year old Trayvon Martin was on his way home from choir practice and delivering hot meals to the elderly.

He stopped to hold umbrellas for a Girl Scout Troop which was raising money for quadriplegic AIDS victims in Africa. After he helped the Girl Scouts, he then delivered 10 Golden Retriever puppies which were breach birth.

That’s when George Zimmerman pulled up in his Hummer with a Confederate flag on the CB antenna, on his way home from a White Hispanic KKK meeting. High on meth and shouting racist slogans, GZ saw TM and opened up with his twin roof-mounted 50 caliber machine guns.

TM saved all the Girl Scouts and then went back to save the Golden Retriever puppies.

GZ ran out of ammunition so he unholstered two Desert Eagle .44 magnum pistols and started firing at the puppies and TM.

That’s when TM was hit in the back by 32 rounds of hollow-point, teflon-coated & explosive ammunition.

With his last breaths, TM prayed for GZ and forgave him.

Then GZ called his cop buddies who were at the KKK rally. They cleaned up the site and made the Girl Scouts and Golden Retrievers “disappear” in the Everglades so there would be no witnesses. They washed the blood from GZ’s jowls after he gnawed on TM’s still beating heart.

It must be true! Justice for Trayvon (and his mother’s merchandising rights)!

Oh yes, GZ is the current world champion for ALL schools of martial art and had just escaped from a mental institution for the criminally insane. A few years earlier, he was indicted for murder eight times but got off only because his father was a Supreme Court Justice.

TM was at least the spiritual and possibly the actual son of the Most Awesomest President Ever!