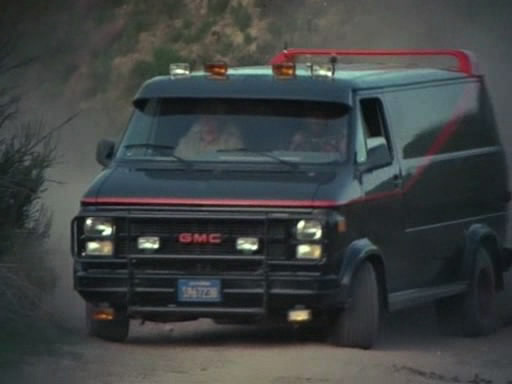 Watch old movies – you know, from the ’80s – and you’ll get a few snapshots in passing about how free we used to be, only 25 years ago – even though in those days we weren’t “fighting” for it in foreign lands and being over-run with Rules, Procedures and such like back in the “Homeland.”

Watch Rocky, for instance – and behold Stallone riding his motorcycle without a helmet. Unthinkable today. What would such a message tell the children, after all?

Or TV shows from that dreamlike era, for example Miami Vice. There’s a clip of someone going to the airport – and buying a ticket, in cash,  with no ID – while smoking. Watch some more as he strolls right up to the gate without being scanned or given a hernia exam or even having to take off his shoes.

TJ Hooker carried a six-shooter (along with his rug) not a high-capacity military piece, the standard sidearm of every traffic cop today. TJ was tough, but even he didn’t Tazer middle aged women over seatbelt violations or draw his gun on people for “speeding.” Once upon a time, ordinary citizens were largely immune from being physically assaulted by cops. You could even talk back. Honest Injun.

Even the military was (relatively) benign in those Long Gone days. Often, it was portrayed in a humorous light. In shows like The A-Team and Magnum, PI, army people were was not the “The Troops” and they weren’t venerated – even deified – as some sort of Praetorian Guard, like today. If anything, the military’s tendency to dogmatism and rigidity – and to lusty, gratuitous violence – was openly derided.

Needless to say, we’ve come a long way in 25 years.

Today, riding a motorcycle without a hemet is not merely illegal in most parts of the country (even though you can legally ride while wearing shorts and a T-shirt) it is the sort of thing that prompts that pod people look of keening outrage when someone even suggests that maybe it ought to be up to the rider – not “the law.”

Today, well, we all know about airports. The experience is not unlike the processing a just-caught felony suspect goes through down at the station. Only now we’re all suspected felons until proven otherwise – and even when we’re pathetically obviously not (as in the case, for instance, of the crippled old person forced to get out of their wheelchair at the bark of a TSA capo).

Keep right on singing that horse-faced song about how proud you are to be an Ahhhhmmerrikun, where at least you know you’re freeeeee. Hand held over your flag pin, the other one clutching your Bible.

TJ Hooker is retired to doing interviews on cable. His successors are much less Officer Friendly. They wear body armor and carry Tazers as well as high-capacity military-grade semi-auto handguns. Buzz cuts make rugs unnecessary. You never see their eyes, either – as all wear mirrored Tough Guy sunglasses, which operate on the same psychological principle as Darth Vader’s expressionless helmet. But nevermind. They’re heroes and protecting us from all manner of evildoers – unless we video them doing the evil – in which case expect a wood shampoo, electro-therapy and a trip to the hoosegow for some more on top of that.

And we just loves us Our Troops. There is nothing more noble than to join up and “serve” – no matter what that “service” might entail. Killing foreigners who’ve not asked to be killed makes one a “hero” in 2011 America. Spilling the beans about My Lai-style massacres by “heroes” (as Wiki/iBradley Manning did, when they leaked video of a U.S. helicopter gunship mowing down unarmed Iraqis – plus a reporter – with Playstation-like playfulness) means a one-way ticket to Gitmo.

It’s a strange mix. Urgent – turgid – flag-waving and song-singing such as is routine background noise today did not exist Back Then, yet somehow, despite the fact that not one politician (as I recall) ever wore a flag pin or gave finger-pointing lectures about “freedom” and “securing the Homeland” we still had some real freedom – and America was just our country.

How did it go so wrong?