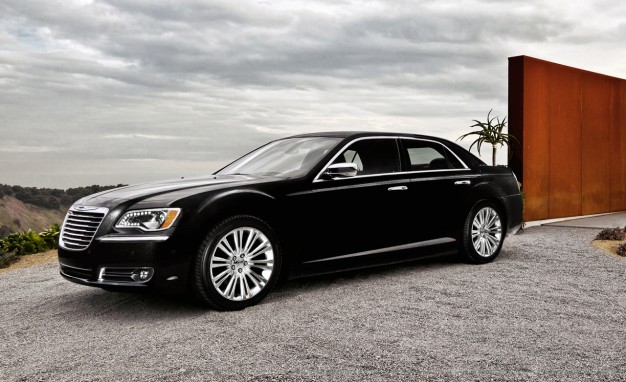 You’ve got just one choice left – if you want a big sedan with a big V-8 driving the rear wheels that doesn’t cost $45,000 or more. 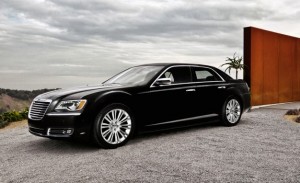 For the first time, Chrysler no longer includes the signature 5.7 liter Hemi V-8 as standard equipment – even in the 300 C (which used to be the Hemi C). All trims now come standard with a more fuel-sippy but less Luca Brasi V-6 instead.

The good news is you can still opt for the V-8 in all trims except the base model. But for how much longer? V-8s are disappearing fast – and may soon become as unicorns. 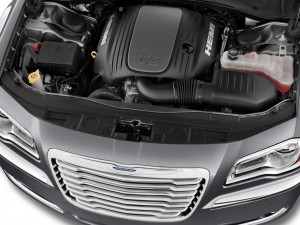 The 300 itself is due for a reboot soon – and it’s entirely possible the next-gen model (probably coming in time for the 2015 model year) will be a very different kind of car. It may not offer a V-8 option at all. The staying power of $4 gas – and the almost-here federal requirement that new cars average 35.5 MPG by 2016 – is having the same effect on big engines that a squadron of cop cars in front of the frat house has on a Saturday night kegger.

Cars like the 300 – especially cars like the Hemi-equipped 300 –  may soon become a memory. Or at best, low-production, high-cost models that only the rich can afford.

The 300 is an unusual animal – a large, RWD-based sedan available with V-8 power that doesn’t (necessarily) cost luxury car money. It can, of course – if you order one with the entire menu of options – including the high-fashion John Varvatos edition ($40,845 to start).

But it doesn’t have to. 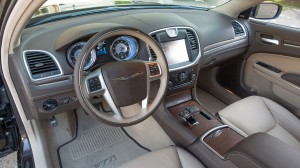 No other car on the market packages all this – full-size, RWD-based layout, available V-8 engine and under $40k – together.

The major change for 2013 is the back-benching of the Hemi V-8, which is now optional even in the C (as well as top-of-the-line C Lux and John Varvatos trims).

All 2013s get the 3.6 V-6 as their standard powerplant, with the Hemi available as optional equipment in all but the base trim.

You can still order AWD in all trims. 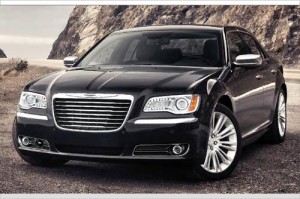 An American car – the way they used to build ’em: Big, heavy, RWD-based (and available with a big V-8 under the hood).

Available with AWD (not offered in either the FWD Toyota Avalon or the RWD Hyundai Genesis).

Bigger – and roomier inside – than several luxury-brand sedans, several of which cost $20k-plus more to start.

A handsome, broad-shouldered lug of a car – John Wayne in a world of Tobey Maguires.

V-6 Hyundai Genesis is stronger – and quicker – and eats about the same amount of gas – as V-6 powered 300. 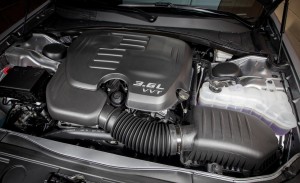 Standard equipment in all 2013 300s is Chrysler’s 3.6 liter “Pentastar” V-6. In the base trim 300, this engine makes 292 hp; in the next-up S trim – which is fitted with a less restrictive exhaust system – the output climbs to 300 hp. The engine is paired with a new eight-speed automatic and your choice (in all trims, including the base trim) of RWD or (optionally) AWD. 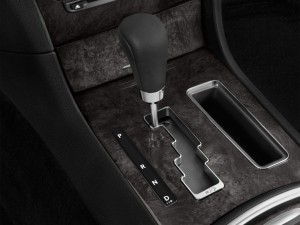 However, the Avalon doesn’t offer AWD – and buyers who want a RWD-based drivetrain layout will naturally incline toward the Chrysler, even if it is heavier and slower. A lead sled has its charms, after all. 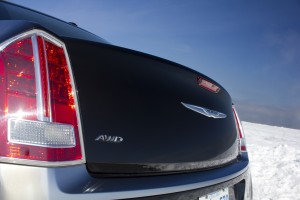 The main problem for the 300 – in terms of power/performance – is the Hyundai Genesis ($34,200 to start). It’s the only other large RWD-based sedan in this price range – and it comes standard with a 3.8 liter, 333 hp V-6 that gets the car to 60 in a class-quickest 6.4 seconds while also managing a still politically correct 18 city, 28 highway.

But – you can’t get AWD in the Genesis, either. And while you can get a V-8 (as optional equipment) the cost of that upgrade will take your breath away – relative to what your money will buy you at the Chrysler store. 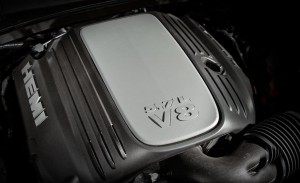 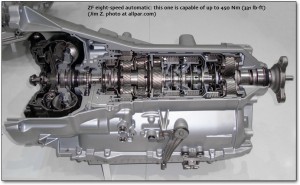 The only head-scratcher is why Chrysler doesn’t pair the Hemi with the eight-speed automatic that’s standard with the 3.6 liter V-6. Instead, you get a functionally unobjectionable but less fuel-efficient five-speed – which likely hurts the Hemi’s EPA numbers at least a little bit. The  V-8 Genesis comes with an eight-speed – which may be why it manages 16 city, 25 highway – exactly the same as the RWD version of the Hemi-equipped 300 – despite its higher rated output.

Probably, the eight-speed used with the V-6 can’t stand up to the Hemi’s torque output. Hopefully, Chrysler has a new box in the works that can handle the Hemi.

If you’re older than 40, you can probably remember when cars like the 300 were as common as Camrys are today. When RWD (and V-8 power) was typical, not exceptional. The comforting feel of two tons of steel. The easy power of lots of cubic inches. The even more comforting indifference to the cost of fuel. 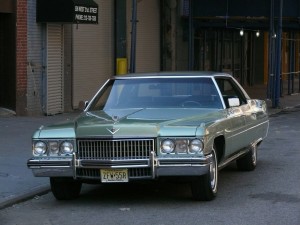 For all these reasons (except the cost of fuel today) the 300 is a pleasure to drive – especially if Hemi-equipped. It’s a dominating car; a heavyweight in a crowd of bantams. There’s a bit of mafia menace about it – a quality that old-school American rollers – think ’67 Cadillac Sedan deVille, or closer to home, ’70 Chrysler Imperial – also had.

They were manly cars – and not ashamed of it. 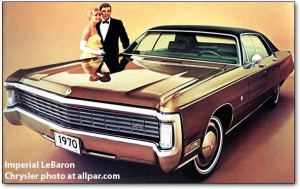 I’ve driven several over the years and each time I get one, I notice the way other drivers defer to it. Rarely is it necessary to flash to pass. The car ahead usually just slides over. When the roles are reversed – and you’re the guy up ahead, with the 300 closing fast in the rearview mirror – you’ll understand why.

And if the car up ahead doesn’t want to give way? Then it’s time to rouse the Hemi. Yes, the V-6 is absolutely adequate – more than adequate, actually. Who can take issue with 300 hp and mid-high sixxes to 60? This is as quick as muscle cars used to be – and ample power to shoehorn onto a busy freeway or maintain 75 on the highway without a hint of struggle. 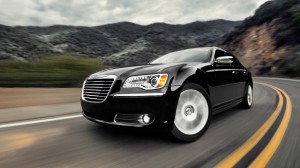 But what makes the 300 special, what defines it more than anything else, is the eight cylinder gorilla under that coffin-nosed front clip.

Nearly twice the cubic inches a Camry is packing. Or for that matter, an E-Class Benz or BMW 5 (the former coming standard with a smallish V-6 and the latter coming standard with a downright tiny turbocharged four). These smaller engines may approximate the performance – in terms of 0-60 times – the Hemi delivers. But they can’t match the sensations – or sounds – that only a surplus of cubic inches delivers.

It is a rare treat. 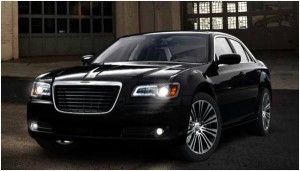 The brooding looks of the 300 are either appealing to you – or not. Chrysler toned down the Goodfellas meme somewhat when the 300 was restyled in 2011 – but it is still a brassy car. Which, of course, is a big part of its charm – if you like brassy. 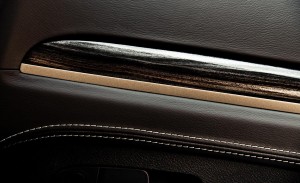 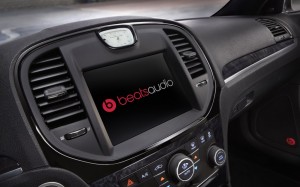 Now, it’s true the Toyota Avalon is similarly spacious (42.1 inches of legroom up front; 39.2 inches in back) but – again – it’s a front-driver and there’s no V-8 to make your day. The Genesis, too, is comparably spacious – actually more so up front (44.3 inches) but its V-8 is a toy for the rich-only.

On top of this physical goodness, the 300 is also a really nice car. It is not like the now-retired Ford Crown Vic – which offered the RWD/big car layout (and V-8 power) at an affordable price but in a rental car/taxi/cop car wrapper.

My test car – a loaded C Lux with the Hemi – was every bit the luxury car that a Benz E or BMW 5 is – except for the MSRP. Absolutely loaded – including the 10 speaker Beats by Dr. Dre premium audio system, wood and leather-trimmed steering wheel (heated, too); big-screen GPS/infotainment flat screen display, heated and cooled cupholders, rear privacy shade, LED cabin lights – to mention just a few of the items included on the extensive roster of creature features – and the sticker still came to just over $50k – about what you’d pay to get into a base-trim Benz E with a V-6  . . . or a BMW 5 with a four. 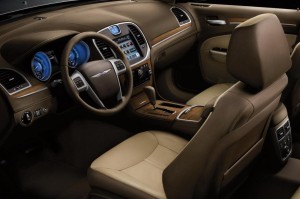 But, back up a bit and consider the base trim 300. It comes with dual zone climate control, heated front seats, leather trim, Bluetooth wireless/iPod hook-up and standard Sirius satellite radio with touchscreen display. It’s just barely over $30k – for a car that’s bigger and roomier – and as or more powerful – than either the $51k to start Benz E (302 hp) or the $47k to start (and 240 hp) BMW 5.

The only-slightly-more-costly S – when ordered with the Hemi – completely outclasses both of them in terms of power/performance (as well as the V-6 Avalon and Genesis). 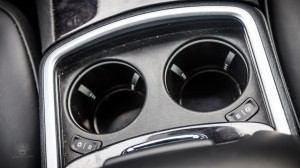 And the C (and C Lux and John Varvatos trims) add not just the kitchen sink – but the whole damn house – while still offering more engine (and car) for less money.

You can probably guess by now that I am a big fan of the 300.

The current 300 is two years old; it looks like the ’14 is going to be a carryover – largely the same. 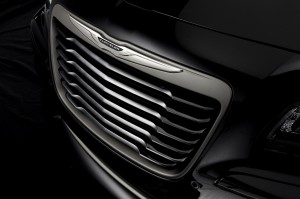 This is purely speculation on my part, but I suspect there will be a course correction that takes account of the economic (and political) realities of our times. The 300 – in particular, the Hemi-equipped 300 – was viable as a mass-production car pre-2008, when gas was under $2 and Average Joes could afford to buy a two-ton RWD sedan with a Hemi under the hood. But now? Consider the fact that even luxury-brands are scaling back on big engines. If people shopping cars in the $45k and up class can’t afford them – or just don’t want them anymore – how much longer will Chrysler be able to offer them?

And without the Hemi (even if it costs extra) the 300 will become something less than it has been up to now.

Here’s to hoping that doesn’t happen. That Chrysler figures out a way to keep the 300’s gonads in the sack – even if it means telling Uncle (and his 35.5 MPG fuel economy fatwa) to bugger off.

Like James Galdofini’s Tony Soprano, the 300 is tough – and hard not to love. I hope the car doesn’t go the way of the actor.