The Oldmobile no longer is. 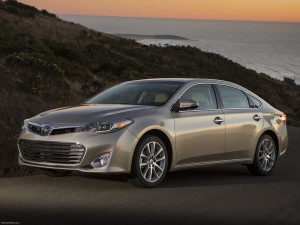 No offense meant to current and previous Avalon owners. Hell, I like big, cushy, quiet cars – and the ’95-’12 Avalon was that in spades. Best Buick ever built by the Japanese – and right here in America, too.

Nothing wrong with any of it. Except for one thing: Time passes. 1990s-2000s-era 40 and 50-somethings are now well into their 60s – and beginning to do the inevitable MacArthurian fading away. They’re not going to be buying many more new cars – Avalons or otherwise. It’s today’s 40 and 50s who are the Avalon’s future. And today’s 40 and 50-somethings are younger-feeling/thinking/acting – and buying.

They don’t want an Oldmobile – and the 2013 is anything but. 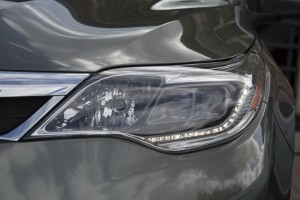 The Avalon is Toyota’s largest sedan – significantly larger than Camry and also larger than every Lexus passenger car except the top-of-the-line LS, which (in standard wheelbase form) is only a few inches longer overall. It’s a big car – for a not-so-big (or at least, not as big) price. In fact, the all-new 2013 model is priced $2,205 less than the 2012:

There is also an all-new hybrid version of the 2013 Avalon capable of 40 MPG in city driving – and 39 on the highway.

Historically, competition has been other large and elder-oriented sedans such as the Buick LaCrosse and the recently retired Ford Crown Vic/Mercury Grand Marquis, among others.  The 2013 reboot, however, is clearly aimed at a younger crowd interested in big – but not old. 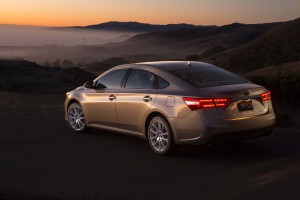 The 2013 Avalon gets a new body, new interior – and a new attitude. No longer just a big car, it is now a sporty (looking and driving) big car as well as a car that could pass for a luxury car.

In fact, Toyota may have made the Avalon a bit too appealing for its own good. Lexus shoppers may shop Toyota now – and aspirational Toyota buyers may see no reason to shop Lexus. Other than being FWD (all Lexus models except the ES350 are RWD-based) the new Avalon could pass for a Lexus.

Oh, except for the price.

No AARP sticker on the bumper. 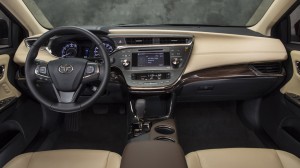 No AWD option (several competitors, including the Buick LaCrosse and the Chrysler 300, offer AWD). 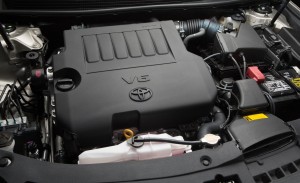 One of the few things that hasn’t changed radically is the Avalon’s powertrain. The same basic 3.5 liter, 268 hp V-6 engine and six-speed automatic carryover. However, the six-speed now comes with multiple driver-selectable settings – including a fairly aggressive Sport mode (with rev-matching/throttle blipping downshifts) and a mileage-minded ECO mode – and the new car is about 111 lbs. lighter than the old car (3,461 for the ’13 vs. 3,572 for the ’12). That plus a much less boxy – and so more aerodynamically advantageous – body shape noticeably improve the car’s 0-60 time, which is in the 6.6-6.7 second range now vs. 6.8 before. 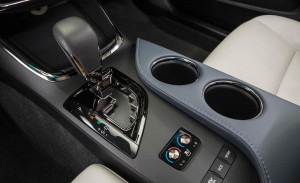 It also looks pretty solid when you stack it up against some of its Lexus brethren. Last week I had a new (2013) GS350. This car does zero to 60 in about 6 seconds flat. That’s only about half a second behind the Avalon – a larger (and roomier inside) car that costs about $17k less to start than the $47,250 GS350.

And the Avalon is almost two full seconds quicker to 60 than the IS250 “sport” sedan!

It – the Avalon – gets better gas mileage, too. Speaking of which:

You can buy a hybrid version of the new Avalon – and it’s priced only slightly higher to start ($35,555) than the base price of last year’s regular Avalon ($33,195). This model is propelled by a gas-electric powertrain and CVT automatic transmission that’s capable of returning 40 MPG in city driving and 39 MPG on the highway. For some historical perspective, that’s on par with what the first generation Prius delivered back in the early 2000s (42 city, 41 highway). 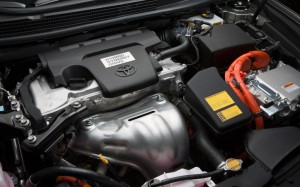 The hybrid Avalon is also much more fuel-efficient than the mild-hybrid “eAssist” version of the Buick LaCrosse, which only manages 25 city, 36 highway – just a handful of MPGs better than the non-hybrid and much better-performing V-6 Avalon.

The one criteria where the Avalon may come up short vis-a-vis the competition is that it’s only offered with FWD. The Buick LaCrosse  and Chrysler 300 can both be ordered with AWD. Ditto the in-house competition (Lexus GS, etc.).

However, bear in mind that without ground clearance and tires made for inclement weather, AWD isn’t going to do all that much for you in the snow. And many AWD-equipped sedans don’t have the ground clearance – or the right tires – for snow driving. The fulsome scurvy truth is a FWD car with good snow tires will do better in snow than an AWD car with “sport” tires.

Also keep in mind that AWD adds weight – which slows the car down and also cuts down its fuel efficiency. The AWD-equipped Chrysler 300, for example, dips to 18 city, 27 highway – vs. the RWD version’s 19 city, 31 highway. 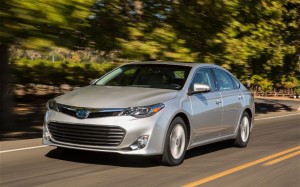 The previous Avalon never lacked for power (standard V-6 approaching 300 hp, etc.) but then, neither did Titanic. Both got going well enough – but neither had what you might call quick reaction times.

First, notice the newly available 18 inch wheels – and 225/45-series tires wrapped around them. No Avalon to date has ever offered  more than seventeens – shod with granny panty all-season tires. The ’13 Avalon’s optional eighteen-inchers (standard on Touring and Limited trims) with their wider  footprint and shorter/stiffer sidewalls, would have made the old Avalon handle better and steer more adroitly. But they’re even more effective on the new car, because its suspension was specifically calibrated to make the most of them – with new-design control arms and (out back) changes to the geometry designed to reduce toe-in angle during turning and braking. 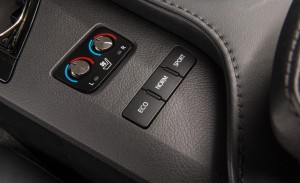 Next, check out the adjustable drive modes – Sport, Normal and Eco. The old Avalon had just one drive mode…. put the gear shift lever into Drive.

Sport mode increases the effort of the electrically-boosted power steering as well as dials in more aggressive throttle response, which makes the car feels snappier when you depress the gas pedal. That plus rev-matching throttle blips on the downshifts puts some much needed lead in the Avalon’s pencil. 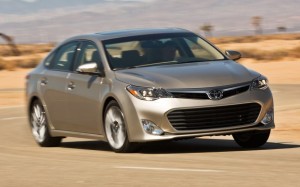 But not so much lead that the car’s a stiffy. Even in Sport mode – and even with those eighteens underneath you – the car remains compliant and quiet. Acoustic glass for the windshield and side glass, more insulation (including foam injected into the A and B pillar cavities) no doubt helps here – along with the revisions to the chassis (which is 12 percent stiffer overall).

The only thing that’s been dialed out is the old car’s sloppiness in the corners. Though Toyota is not using the word in its marketing, the new Avalon is a sporty car.

And when you want the old Avalon back, just push Normal. Steering effort returns to one-finger-easy and the powertrain’s demeanor returns to quiescent. The new Avalon is still as mom-friendly as ever – but now dad will like it, too. 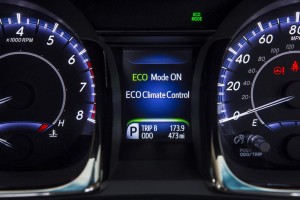 ECO mode is a mixed bag.

Toyota says when engaged it “balances driving performance, air conditioning function and fuel efficiency.” Translation: The AC blows tepid – and the seat heaters become warmers. There were no exact figures available as to how much fuel you save as your reward for schwitzing in summer – but my guess is not much. The ECO setting is more about appearances than meaningful increases. If you really want to save gas, look into the hybrid Avalon. It’s a pretty good deal: Gen. I Prius fuel economy – 40 city, 39 highway – for a relatively small price premium over the non-hybrid Avalon. 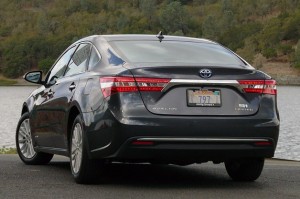 Size absolutely matters. It has been perhaps the single biggest “sell” for the Avalon over the years. And not merely size. What made the Avalon so appealing is that it was both big and affordable. Big cars have – to a great extent – become rich people’s cars. This is even more true today – now that modestly priced big cars like the Ford Crown Vic (and its higher-trim Mercury twin, the Grand Marquis) have been cancelled and replaced by mid-sized cars like the Taurus.

Avalon gave you more car – physically, outside and inside – than a Benz E-Class, for $20k less.  The catch was the Avalon was an Oldmobile. Boring to look at, boring to be seen in. Boring to drive.

Was being the word.

Because the new car isn’t. Hell, they may have gone too far – with the Jag XF-looking rear clip and sail panels. From the side, it could be a new Lexus – or at least, you could park this car in the Lexus showroom next to other new Lexi and it would not be as out of place as Piers Morgan in a biker bar. 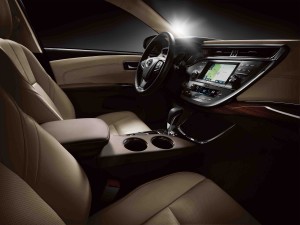 Unlike the old Avalon.

There has been a slight reduction in headroom due to the sexier, lower-cut roofline – it’s now 38.5 inches in front vs. 38.9 inches in the ’12 – but rearseat headroom is actually slightly improved (37.9 inches now vs. 37.5 inches previously).

Still, this is a big car – with more space inside than high-priced luxury sedans like a Benz E (or a Lexus GS) and now, in addition to the utilitarian appeal, aesthetic appeal as well. 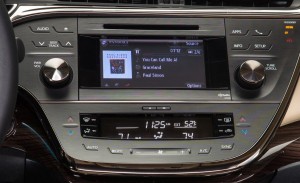 The secondary controls are set before you almost iPad style on a forward canted and slightly upturned center stack – with “tap and touch” sensitive buttons. This type of control interface is becoming common (I had a Cadillac ATS with similar a few weeks back) and has several advantages, including no worries about dust or spilled stuff getting into the cracks – because there aren’t any. Just a single sheet of plastic with touch-sensitive pads. The only thing I worry about is down-the-road repair costs.

Neat features in the new Avalon include a lockable glovebox – a feature that has become fairly uncommon, for reasons that escape me. Luxury car features such as a rear power sunshade and three zone climate control are available (back seaters can adjust temperature and fan settings to their individual liking). The seat heaters are superb – as in, they actually heat up as opposed to merely warming up. Unfortunately, Toyota didn’t go one step farther and offer a heated steering wheel. Probably because that would have pushed this car that much closer to Lexus turf. 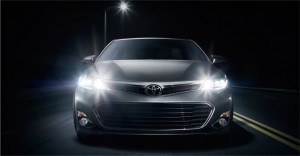 And that may prove to be this car’s biggest problem.

This is not your father’s Oldmobile.