The Toyota Avalon is still the best Buick a Japanese car company ever made:

It’s a plus-sized, hugely likable lug of a car. Limo-roomy back seats, relaxed feel up front. Quiet/powerful engine under the hood. The kind of car you want for 1,500 mile trips.

These qualities (among others) are why the Avalon outdid – and outsold – Buick at its own game for so many years.

The problem – for Toyota – is that Buick is making a comeback. Models like the new LaCrosse are giving the Avalon the first real sweat it’s had in years.

Does Toyota see it?

Can the Avalon meet the challenge?

The Avalon is Toyota’s largest passenger car. It’s about 8 inches longer (and about an inch wider) than the mid-sized Camry, which gives it a roomier interior (especially the back seat area) and a larger trunk.

Main competition is the Buick LaCrosse and – to a lesser extent (because it’s not nearly as nice) the Chevy Impala.

Toyota has dropped the previous XL and XLS trims. For 2011, there’s just the “base” Avalon and the top-of-the-line Avalon Limited.

There’s almost enough room in the back to sublet it to a couple of Mexican illegals.

Full-size spare – a real tire, not one of those “limited use only” minis.

Similar-in-them/size and layout Buick LaCrosse CX ($26,495) costs thousands less to start and can be ordered with AWD for about the same price ($32,570) as the base model FWD Avalon.

The Avalon is powered by Toyota’s long-serving 3.5 liter V-6, tuned to 268 hp. It’s the same engine used in the Camry, RX and several other current and past Toyota models and has a track record for being a long-lived, reliable engine.

All Avalons are front wheel drive.

Though it’s not marketed as a sport sedan (far from it) the Avalon is sport sedan quick when you need it to be. It can accelerate to 60 mph in 6.6 seconds – almost a full second quicker than the slightly more powerful Buick LaCrosse CXL equipped with its optional 3.6 liter, 280 hp V-6.

This is one of the best (if not well-known) things about the Avalon. It doesn’t look fast. It doesn’t have a reputation for being fast. But floor it and you’ll discover that it is fast. Fact is, it’s quicker (and faster) than some sports cars, including the Mazda Miata – and it’s not too far off the pace of a V-6 Camaro or Mustang.

One reason for the Toyota’s superior performance relative to the slightly stronger (on paper) V-6 LaCrosse is its much lower curb weight. The Avalon weighs 3,572 lbs. vs. a husky 3,829 for the LaCrosse. The AWD-equipped LaCrosse is even heavier – 4,196 lbs. – and thus, even slower.

The Chevy Impala, meanwhile, weighs about the same as the Avalon but it has much less power – even when equipped with its top-of-the-line 3.9 liter V-6, which is rated at 224 hp. Its standard engine manages just 211 hp – and the Impala also comes only with a four-speed automatic transmission – a technological relic for a 2011 model year vehicle.

But the Avalon’s main draw – the thing for which it is known and revered – is its Pullman Car ride quality.

Most car companies have been trying to emulate the “sporty” ride and handling characteristics of BMW and other Euro branded cars – which is fine, if that’s what you’re looking for. But if you’re looking for a ride like they used to make ’em – back in the days when “luxury” meant cocooning you from the world outside – the Avalon is one of the very few new cars that can deliver.

Everything about it is soft, plush and comforting – not just comfortable. And it’s not just the ride – it’s everything else, too. The controls are obvious (“intuitive,” as the highbrow auto press likes to say) and the seats are like old friends you can spend hours and hours with. The steering is one-finger easy, but neither vague nor overboosted. The car just goes where you direct and does what you ask of it with the self-effacing efficiency of a top-of-the-line English butler.

And the seat heaters are outstanding.

This is the car I would choose if I needed to drive across the country.

The Avalon’s a big car but not a huge car in the way that a traditional (read: American-made) full-size car like a Lincoln Town Car (or Ford Crown Vic) is.

An interesting fact, in fact, is that while the Avalon is literally more than a foot shorter than a traditional RWD American “roller” like the recently retired Vic – which stretches 212 inches nose to tail – the shorter overall Avalon (197.6 inches) has more backseat legroom (40.9 inches vs. 39.6) and only slightly less legroom up front (41.3 inches for the Toyota vs. 42.5 for the Vic). Better packaging – most of the car is centered between the front and rear axles – is the reason for the season. And it’s why old-style large Marges – big, boozy sedans built around body-on-frame, RWD layouts with long hoods, etc. – are becoming extinct.

Of course, the more relevant comparison is vis-a-vis the Buick Lacrosse – which is similarly laid out/packaged. It (the Buick) is shorter overall by about half an inch and has just slightly less backseat legroom (40.5 inches) and just slightly more front seat legroom (41.7 inches). Its trunk is noticeably smaller, though – 13.3 cubic feet vs. the Avalon’s 14.4 cubic foot trunk.

Here’s the big difference between the two: The overall appearance and style of the LaCrosse is much sportier. The Avalon’s a conservative, inside and out. Which flavor you prefer is a matter of personal preference. Both cars are exceptionally pleasant places to spend time.

PS: The Chevy Impala’s not even in the same league as either of them. If you want something a lot less expensive – and don’t mind that it’s also a lot more primitive – then maybe it’s worth a look.

I’m not sure why Toyota decided to push the entry price point of the Avalon into entry luxury territory. One of the reasons for the Avalon’s success to date has been that you could get a bigger, nicer (and more powerful) car than a Camry for not much more than the cost of a Camry. But that $4,500 price uptick …. it may put off buyers who chafe at the prospect of having to pay almost-Lexus money for a mere Toyota (no offense).

It also makes it easier for Buick to shiv the Avalon. The new LaCrosse is (overall) a really nice car. Maybe it’s not quite as quick, 0-60 – but it’s probably quick enough for would-be buyers of such a cruiser. And it offers AWD, which of course you can’t get in the Avalon. Granted, not everyone wants AWD, but given that you can get an AWD-equipped LaCrosse for slightly less than you’d pay to get into a base model FWD Avalon… well, that could prompt on-the-fence buyers to Go Buick.

Why not, after all? It’s like getting the AWD for free.

Another thing: Toyota needs to up its standard warranty coverage. Three years/36,000 miles is pretty chintzy given what you can get elsewhere (Buick gives you four years/50,000 miles) and given that Toyota needs to rebuild customer confidence in its products. There is absolutely nothing wrong with the Avalon or any reason to suspect there ay be. But it’s a fact that Toyota’s recent troubles with the Prius (real or not) have put questions into peoples’ minds that never occurred to them before.

The Avalon is still the best Japanese-brand Buick on the market.

But Toyota shouldn’t take its buyer base for granted – or price itself out if its own market. 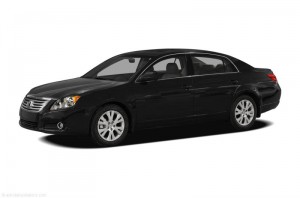