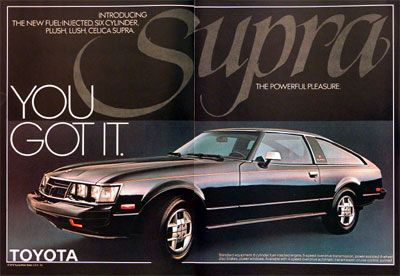 Nissan’s Z-car may have been the first Japanese sports car to make a real splash in the United States back in 1969 – but crosstown rival Toyota wasn’t going to sit on its hands indefinitely.

Especially since Toyota had technically beaten the Z-car to the punch by four years with the stunning 2000GT – which made its debut at the 1965 Tokyo Motor Show. Unfortunately (for Toyota) the aluminum-bodied, in-line six-powered 2000 GT was both complex and expensive; it was also produced in extremely low numbers – appx. 351 examples, total, with only about 60 of those making it to America – and for just three full years (1967-’70), after which the program was cancelled. 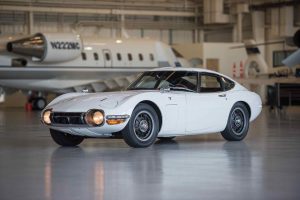 By the early-mid ’70s, the Z-car was making huge inroads against clumsy-handling, gas-guzzling and increasingly wheezy (thanks to Uncle) American muscle cars – and also against the still quick and nimble but not-so-reliable British sports cars of the era.

Toyota desperately wanted to get back into the game. 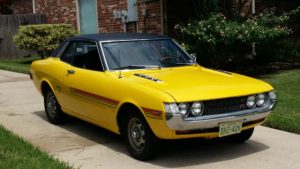 There was the Celica – a sporty, rear-drive, two-plus-two. It came to market shortly after the Datsun 240Z, in 1971. But the Celica was a slightly sexier economy car compared with the athletic, purpose-built Z-car, which also featured a standard in-line six vs. the much less prestigious – and much less powerful – four-cylinder found in the Celica.

But it was a start.

With the guiding spirit of the 2000GT in mind, Toyota engineers began work on a new kind of Celica – one that would (in time) prove the equal of the Z-car.

It would be called Supra. 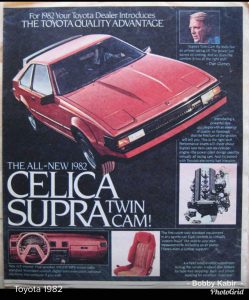 At first, the car was basically a stretched and hopped-up version of the Celica. The inaugural 1979 Mk I model shared the same basic chassis (including the solid rear axle/RWD layout) but was 5.1 inches longer than the standard Celica. This necessitated different sheetmetal in several areas, including the rear quarter panels. There was also a 2000GT-inspired front-end treatment and wider B pillars to give the car a more aggressive look.

But the really important difference was under the hood.

Instead of the Celica’s MPG-mindful four-cylinder engine, Toyota engineers endowed the first Supra with a 2.6 liter in-line SOHC six – a clear shot across the bow aimed directly at the Nissan Z-car. This engine developed 110-hp (initially) and was the first Toyota production engine to be fitted with electronic fuel injection as standard equipment.This was a rare feature in the late ’70s that would not see widespread use in American cars until well into the mid-late 1980s. 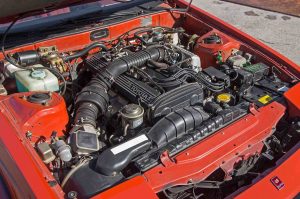 Like its spiritual forebear the 2000GT, that first-year Celica Supra also came standard with four-wheel disc brakes – another rarity back in ’79 – as well as a 5-speed manual gearbox (with a four speed automatic available optionally) and a sport-tuned suspension and gauge pack with tachometer – yet another “something” that wasn’t commonly found in most cars, even sporty ones, until many years later.

At first, the cars came through with stamped steel wheels and plastic trim covers – just like the early Z-cars. But by 1980, these were tossed in favor of 14×5.5-inch aluminum alloys. Another functional improvement came in 1981, when the displacement of the SOHC six was upped to 2.8 liters (and power output ticked up slightly to 116 hp, net). 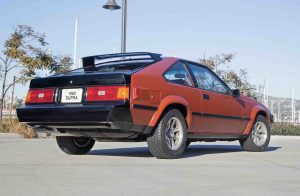 The Mk I ’79-’81 Celica Supra was took about 11 seconds to get to 60 and had top speed of about 115 mph. In the late ’70s/early ’80s, these were solid numbers – not too far off the pace of contemporary V8 muscle cars such as the Chevy Camaro Z28 or Pontiac’s Firebird Trans-Am, both of which were much heavier and gimped by progressively detuned engines (courtesy of Uncle).

And the Celica offered much better balance, braking and handling – very much like its Nissan rival. Total production of the Mk I was approximately 63,895 units.

Still, it was only a beginning. There was more work yet to do. 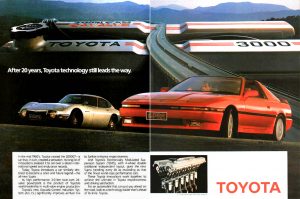 In 1982, the second generation Celica Supra bowed – with major changes evident throughout, including a new dual overhead cam (DOHC) 2.8 liter in-line six, now rated at 145 hp. The Mk II was offered in two forms: enthusiast-oriented P-type (for “performance”) or softer, luxury-oriented L-type. While both used the same engine, P-types came through with a more aggressive final drive ratio (4.10 or 4.30) while the L-types were fitted with a 3.727:1 ring and pinion for better fuel economy and less engine buzz at highway speeds.

The “Ps” were hunkier looking, too – with wider rims (14x7s and 225/60-series performance tires vs. 14×5.5-inchers and P195/70-14 all-seasons), pronounced fiberglass fender flares and a wild (for the time) rear spoiler. Form-fitting sport buckets on the inside with driver-adjustable manual lumbar support and side bolsters – also uncommon at the time – were also part of the package, with a limited slip differential available optionally. 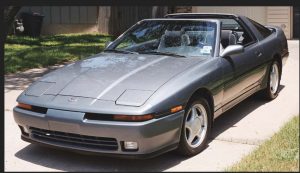 The Mk II’s modified Macpherson strut (front) and semi-trailing line (rear) suspension was tuned by Lotus and by ’85 – the final year for the second generation cars – power output was up to 165 hp. Straight line performance and handling had improved dramatically compared with the original ’79-’81 versions. The car was now capable of reaching 60 mph in about 8.7-8.9 seconds; top speed edged close to 130 mph – very competitive with same-era American muscle cars like the Mustang GT 5.0 and Chevy Camaro Z28 IROC-Z.

The Supra was maturing into an impressive GT coupe that was rapidly closing the distance between itself and more established competitors – with new competitors like the Corvette now in its gunsights. 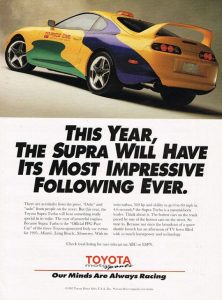 1986 saw the introduction of an all-new Mk III, the first year for a Supra that was no longer also a Celica – in name or otherwise. Beginning with this model year, the two cars went their separate ways – with Supra becoming an all-out (and rear-drive) high-performance super coupe that shared nothing with its now front-wheel-drive, toned-down forbear except the Toyota nameplate.

A new 3-liter six cylinder engine was now standard, with output finally cresting the 200 hp mark for the first time. But this was merely the Supra’s standard engine. For buyers with a real need for speed, Toyota offered a turbocharged version of this engine – beginning with the ’87 models – that was good for 230-hp, dropping the car’s 0-60 times to just over six seconds.

The turbo engine featured coil-on-plug ignition – the first production application of this now-common technology in a Toyota vehicle. Four channel ABS, traction control and an electronically adjustable suspension system called TEMS, or Toyota Electronically Modulated Suspension were among the very high-tech for the times equipment found in the Mk IIIs. 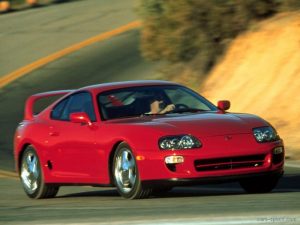 A targa-style roof was available, too.

The Mk III had a long production run, lasting through the ’92 model year – almost twice the three-year shelf-life of the Mk I and Mk II Celica Supras. However, while performance continued to grow sharper with each passing year, the Supra was gradually transforming into an expensive semi-exotic – with an equally semi-exotic price tag: 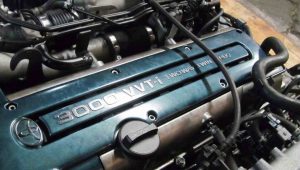 The upward trend in power – and price – continued with the introduction in 1993 of the Mk IV Supra – which sported an available twin-turbo 3-liter engine and 320-hp (a 220-hp non-turbo engine was still standard equipment).

Twin-turbo models also received a new Getrag six-speed manual transmission, 17-inch rims (16s were standard on the non turbo cars) and 4-piston brakes, among other upgrades. In addition, Mk IVs also had aluminum hoods, magnesium steering wheels and lightweight suspension pieces to shave weight and reduce unsprung mass. Toyota’s variable valve timing (VVTi) system appeared in ’98, by which time the Supra was at the pinnacle of its technological development and performance capability. A twin-turbo Supra could deliver 0-60 times of 4.6 seconds and quarter mile runs in the high 12 second range at nearly 110 mph. 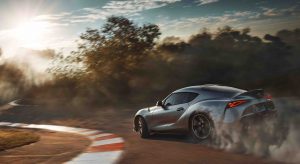 These numbers made it one of the world’s quickest street cars at the time. Even by today’s standards, nearly 30 years later, a 4.6 second 0-60 time is still supercar quick.

But the base price of a Mk IV Supra was now almost $34,000 – about $63,000 today – and turbo models were pushing $40k. This was yuge money in the early-mid ’90s – and it just happened that the market for powerful coupes took a nosedive during this period. Sales slumped badly, despite the objective fact that the Mk IV was without question the quickest, fastest, best-handling and most formidable Supra of them all.

It is an irony of history that both the Supra and its crosstown nemesis, the Nissan 300ZX, eventually fell victim to their own over-achievement. 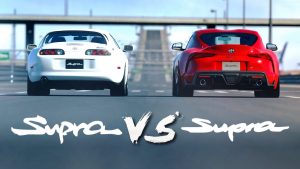 By the mid-late ’90s, each car had developed into a true Ninja from fairly humble beginnings – and each suffered declining sales interest as ever-improving performance tracked with ever-escalating price. Nissan eventually dropped the Z-car and Toyota did the same with its Supra, pulling it from the U.S. market after 1998 – and canceling it entirely after 2002.

The Z-car, of course, made a comeback.

And so has the Supra, which returns this year as the Supra GR. Taking a page from the past, the new Supra costs less than the last Supra – just $49,990 in today’s money. Which means it costs about $10k less in real terms than the last new Supra you could buy – almost 20 years ago.

Like the original Supra, the new one is light and relatively simple – and it has a 3 liter in-line six. But this ones makes 335 hp.

Which raises the bar, again.