Now that Ford has retired the Crown Victoria, pretty much the last large (5-6 passenger) sedan you can buy for less than $25k is the 2011 Chevy Impala.

If you’re looking for a big car without a big price tag – it’s hard to beat.

Just don’t expect it to be the latest – or greatest – thing on the road.

$25,605 will get you into the higher-trim LT version – and if you want a bit of sportiness, there’s an LTZ version that comes with a larger, slightly stronger 3.9 liter V-6 engine, firmer-riding suspension and so on. Its base price is $29,930.

All Impalas are front-wheel-drive.

3.5 liter V-6 comes standard with flex-fuel capability, which means it can operate on regular unleaded as well as E85 ethanol. There’s a new Luxury package, too, but other than these small tweaks, the 2011 version is almost exactly the same as the 2010 model.

People will think you’re a cop and get out of your way.

Not as up-to-date (or as nicely finished) as the Toyota Avalon or Buick LaCrosse.

Chevy offers two V-6 engines in the Impala: Standard in the base LS and mid-trim LT is a 3.5 liter V-6 rated at 211 hp. This engine is teamed up with a four-speed automatic.

It is capable of getting the car to 60 mph in about 8.4 seconds.

Compared with other V-6 engines in mid-large cars, the Impala’s 3.5 liter V-6 is on the underpowered side. Ford’s Taurus (a slightly smaller car) comes standard with a 263 hp 3.5 liter V-6; the size-equivalent Toyota Avalon has a standard 268 hp 3.5 liter V-6; the new Buick LaCrosse can be ordered with a 280 hp V-6.  The Avalon and the LaCrosse also both come with more modern (and efficient) six-speed automatics.

However, the truth is that functionally speaking the Impala’s 3.5 V-6/four-speed automatic combo works just fine. It may not be the latest thing, or the quickest – or the most efficient – but given the huge price gulf between an Impala and cars like the 2011 Avalon (which starts at $32,445) it has virtues of its own.

The 3.5 liter V-6 also returns good fuel economy: 18 city and 29 highway. For a big car, this is respectable. It’s also about the same as you’d get in the much more expensive Avalon (20 city, 29 highway).

A larger, more powerful 3.9 liter V-6 (224 hp) is available in the Impala, but to get it, you have to buy the top-of-the-line LTZ – which has a base price close to $30k – which is almost as much as the Avalon (and more than the V-6 equipped Buick LaCrosse).

It’s true the LTZ also comes with nicer trim and other equipment that you don’t get in the base LS or mid-level LT Impala, but its almost $30k MSRP erases the huge price advantage the Chevy otherwise has compared with the newer, more up-to-date Avalon, LaCrosse and Ford Taurus, too – making its out-of-date features (especially the four-speed automatic) and power/performance deficit more noticeable and harder to rationalize away.

Some reviewers harp on the 30-50 hp power deficit of the Impala’s engines (especially the base 3.5 liter engine) compared with what’s currently considered “benchmark” in the segment. While they’re right about the Impala being less powerful than the current average, what matters, ultimately, is whether it is powerful enough for everyday driving.

And of course, it is.

Since when did 211 hp become “weak”? Only in comparison with today’s uber-muscular family cars. Most of us (certainly people who buy cars like the Impala, anyhow) just want to get safely from “a” to “b.” America does not have Autobahns; most people don’t drag race. A car with the capability to reach 60 mph in 5 or 6 seconds is definitely a lot of fun, but it’s also not the point as far as everyday normal driving is concerned. Sure, you can spend more money to get the extra second or two of quickness – and that’s fine, if that’s what you want. But if you want a perfectly adequate performer for everyday use – and would rather have several thousand bucks in your pocket than tacked onto your new car payment – the Impala makes sound sense.

Same with the car’s handling. Competitors may post better numbers on the skidpad and could out-corner it on a road course. But does any of that matter as far as making the trip from your house to the supermarket and back?

What I think matters more than speed or track-day handling capability is the Impala’s Barcalounger ride quality. It is a really nice car to be in on long highway trips with the cruise control set at 70.

This whole “sportiness” thing has gone too far, in my opinion. I like sporty cars. But not all cars need to be sporty, do they? It used to be that if you wanted a car built for high-speed cornering and aggressive driving, you bought a car designed for that kind of duty. Now virtually all cars – whether it’s a two door or a four door or a wagon or even an SUV – have to be sporty, apparently. And the result is a harsher ride, a sore back – and usually a higher sticker price, too.

The Impala is bland. It is the Joe Sixpack of cars.

However, you can make it more interesting by ordering a color other than white or navy blue. This will also help you look less like an unmarked cop.

I like the simple, immediately comprehensible controls – even if some of the materials used for the dash/door panels and console are obvious extruded plastic.. But so what? Everything works and the car is a pleasant driver that’s much cheaper than other big cars – and roomier, too.

Impala has more front seat head room (39.4 inches) than the Avalon (38.9 inches), more front seat legroom (42.3 inches compared with 41.3 inches for the Avalon) and six-passenger capacity vs. just five for both the Taurus and Avalon – neither of which offer a front-row bench seat.

The Ford does have a slightly larger trunk (20.1 cubic feet vs. 19 cubic feet for the Chevy) and the Avalon’s rear seat legroom (40.9 inches) is the best in this class (and about three inches more than the Impala’s) but overall, if size matters, the Impala wins.

One weakness is pulling ability.

The front-wheel-drive layout is inherently lighter-duty than the old school rear-wheel-drive layout of models like the discontinued Ford Crown Victoria – and this results in a pretty wimpy maximum trailer rating of just 1,000 pounds.

If you need a car that can pull serious weight, you need a rear-wheel-drive car.

The Impala’s chief negative  is not that it’s a bad car, or a poorly built car, but that it’s considered a dated and nothing-special car. This kills its resale value – but that may not matter to you if you’re the kind of buyer who keeps a car for 10 years or more.

And the rapid depreciation rate is compensated for to a great extent by the Chevy’s much lower sticker price (LTZ versions excepted) and also by the fact that it is known to be a very durable and solid car. Remember that the Impala is a popular choice with police departments and taxi companies all over the country. That’s a great vote of confidence as far as long-haul durability is concerned.

On safety, the Impala also brings a strong hand to the table by dint of of its sheer size. Even without ABS, traction/stability control and front seat side-impact air bags (all standard) it would be inherently more crashworthy than a smaller car with all that stuff.

Add all that stuff to the Impala and it’s even safer.

Another thing: GM’s OnStar system comes standard in all versions of the Impala. It will summon EMS in the event you wreck and direct them to your location, even if you are unconscious. Sensors in the car detect the impact, while a transponder in the car sends the signal (via satellite) to the GM OnStar Center – which calls the cops and ambulance.

Some (me included) don’t like the big brother-ish idea of having a transponder in the vehicle that makes it possible to track its location  (and thus, you) wherever it goes – but my guess is most people shopping for a big family-type car will like it and be pleased that OnStar is included at no extra charge.

There are “better” cars on the market – if better means newer designs with more power and the latest features and equipment, etc.

But “better” that way also means bigger bucks – often for power, features and equipment you may not especially want or need.

For a solid family car value, don’t overlook the Impala. 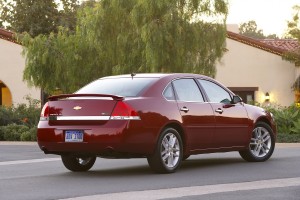 In the Rearview: AMC’s Almost Corvette . . .