They don’t make them anymore – not really.

There are economy cars, of course. But these are of a different species, much evolved from their Aries-K ancestors.

The least of them can reach 60 mph in about 10 seconds and is capable of triple digit top speed runs. Most have air conditioning, standard – plus a full set of instruments and a not-half-bad stereo rig – usually with at least a single-slot CD player and four speakers. Every single one of them comes with at least driver and front-seat passenger air bags. Many have side impact bags, too. Anti-lock brakes and stability/traction control are pretty common.

They also have good panel fitment, nice paint jobs and (often) better-than-nice interiors. Go take a look at something like the 2011 Ford Fiesta or the new Mazda2 and see for yourself. There is nothing meager – or embarrassing – about these machines. They’ll probably go for 200,000 miles, too.

In fact, any modern economy car is a better car – and a better equipped car – than even the luxury cars of the 1970s were. Some of them have four-cylinder engines with variable valve/cam timing (and a few, turbos) that put out more power, more reliably and smoothly, than some of the V-8s of the mid-late ’70s (and virtually all of the sixes). It’s Pravda. But you have to be at least in your mid-30s to understand. Old enough to have driven something thoroughly cheap and all-around shitty like a a Toyota Starlet, Yugo, Chevy Chevette or Plymouth Champ. Something with no AC and 55 hp and 14-inch steel wheels and the cheapest, skinniest tires this side of a Moped. So underpowered that top speed runs and 0-60 times were both more or less the same things. No gauges – except for an 85 mph speedo and few idiot lights. The finest Soviet bloc plastics. An AM/FM tuner with a pair of $10 speakers you bought yourself at Circuit City on either side. Paint that went chalky or began to peel off before the car was three years old. Metal that was both thin and unprotected against rust. If it lasted five winters before the floor pans had viewing portals, you were among the fortunate few.

If you hit something, you’d feel it. Anything substantive and solid – like a tree – and it would be the very last thing you’d feel, too.

But they did have their charms… .

With perilous handling came an opportunity to hone your  driving skills. Anyone who has perfected the technique of parking brake U-turning a Starlet has one up on a driver who hasn’t had the experience. Without ABS – and with barely marginal stopping power – one learned all about following distances and planning ahead.

You learned to keep a can of ether in the glovebox to hose down the throat of the single barrel carb when the rotten son-of-bitch wouldn’t start on cold mornings – and a rag in the glovebox to wipe down the fogged-up windshield, which fogged up not just because the defroster didn’t work but also because the carpets were soaked (either from rain leaking in through the windows or from coolant seeping into the cabin from a leaky heater core).

You dressed warmly in winter because you had to tourniquet off the heater hoses a few months back, when the core began soaking the carpet with Prestone.

In summer, you tried to keep moving so the bastard wouldn’t overheat on you again.

A friend in high school had an especially miserable little Subaru – a Justy, I think it was. No reverse. You had to Fred Flintstone it out of the 7-11 parking lot. Open the door – and push. One afternoon I was driving my ’73 Super Beetle when I went over a dip in the road and suddenly found myself sittings several inches closer to the road. The rust-weakened floorpan had given way. I made a detour to a hardware store, bought a piece of iron bar. When I got home, I used a jack to push the floorpan back into position, then secured it with the iron bar and some heavy bolts. It lasted for another year. The carburetor in the VW had this pressed-in plug that would sometimes just pop out – which would create a horrendous vacuum leak and stall the car out. Luckily, a dime was about the same size as the plug – and that along with a dollop of RTV got you back on the road. This other guy I knew had a Plymouth Champ. If you floored the gas pedal just as you turned the ignition key to Off, it would diesel for as long as you wanted…

I can’t think of a single modern economy car that’s memorable in the way the old shitboxes were. They  almost never break down. They have AC, pretty good stereos. Many of the newer ones have or offer GPS and satellite radio, too. The weakest of them can reach 60 mph in a third of the time it took something like an old VW Beetle to do the same trick.

But we probably won’t have anything much to say about them 20 years from now – and that tells me we’re the poorer for it, somehow. Especially today’s kids. The Crappy Car Experience has come and gone like real Coke (you know, the stuff with cane sugar – not the high fructose corn syrup con that is “classic” Coke) and catalytic converter test pipes.

They’re missing out on something – but they’ll never know what it was. 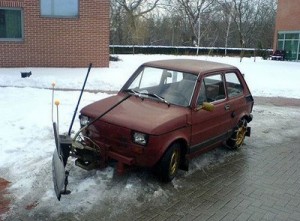