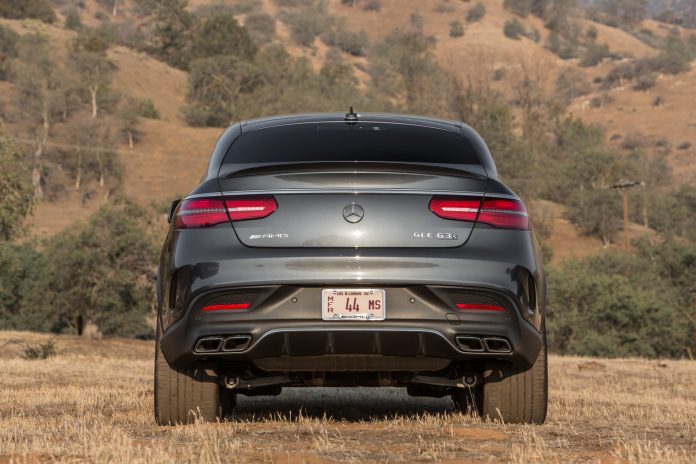 You make the rules, we’ll find new ways around them.

That could be AMG’s motto and maybe is . . . unofficially. The Rhinoceros Thing you see before you is somehow fully compliant with every government reg; and yet… well, just look at it.

Al Gore does not approve.

But it’s all – for the moment – perfectly legal. There is nothing they – the short-haired termagants at EPA and the beetle-like killjoys at NHTSA – can do to stop you from buying one or Mercedes (via AMG, Benz’s in-house high-performance skunkworks) from building it.

It’s got to be making them nuts. 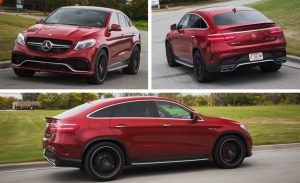 Start with a GLE – a big and very heavy (5,000-plus pound) Mercedes SUV. Shave and swoop the roof but keep the regular GLE’s bog-hopping 9.1 inches of ground clearance. Chuck the puny 3.5 liter V6, the hybrid idiocy and the workhorse diesel. Install in their place your pick of AMG-massaged twin-turbo power plants, starting with a twin-turbo V6 and 362 hp as the appetizer and then – the main course – a hand-built, 5.5 liter, 557 hp V8.

Of course, this kind of fun costs. 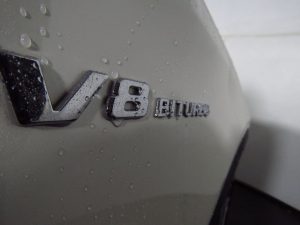 They are still getting away with it.

Someone is bound to notice and then the game will be up. 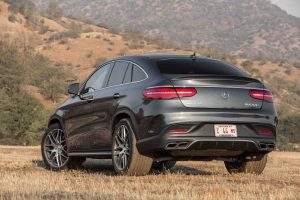 Despite being even more jacked-up than the X6, the Mercedes has the more pliant ride.

Head and legroom in both rows is still about the same as in the conventionally SUV-bodied GLE – and more than in the X6 M.

Imagine Brie Larsen is your girlfriend. But if you touch her, she’ll explode.

The USB hook-ups buried in the center console will make you want to explode.

Our sun, for example, is relatively big  . . . compared with the Earth. But compared with VY Canis Majoris, our sun is a speck of sand.

But either will do.

If you go with the AMG43, you’ll get a nine-speed “manually interactive” automatic paired with 4Matic AWD. This combo gets to 60 in about 5.2 seconds and manages 17 city, 23 highway.

The AMG 63’s additional 215 hp gets the 0-60 time down to 3.8 seconds, Mustang GT territory and not too far off the bumper of a new Corvette, which weighs only slightly more than half as much as the Benz and which you wouldn’t want to take out in the snow. 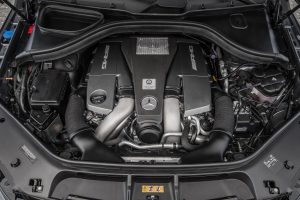 The bi-turbo V8 (signed by the craftsman who put it together) is paired with a seven-speed AMG-programmed Speedshift automatic, which is also paired with 4Matic AWD. 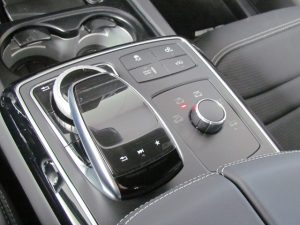 The EPA says you can go 14 miles in city driving on a single gallon of fuel – and 18 on the highway. This is actually pretty good given 5,200 pounds at the curb and (for the AMG GLE 63) the rolling resistance of 22 inch wheels shod with staggered size 285/40 ContiSport tires up front and 325/35 tires in the back. 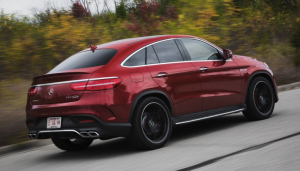 Push the ignition button and a gnarly pre-catalytic converter snarl erupts out of the quad tip AMG exhaust. It contrasts curiously with the delicate, almost Prius-like control toggle you use to put the transmission in gear.

There is nothing delicate about what happens next.

The wormhole dilates, the world around you refracts. Each gear change accompanied by a sonic boom as baffles in the AMG exhaust open, then slam shut again, wastegate-like, to let the backpressure build for the next boom.

The BMW may be slightly quicker, but it can’t touch the Benz’s pipes. 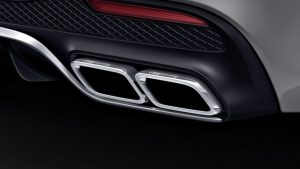 But keep a tight grip on the wheel.

Most high-performance cars sit low to the ground – and it’s not just for looks. Handling – and high-speed stability – tend to be better when there’s less daylight between the asphalt and the floorplans.

But the AMG GLE has more clearance than a Subaru Outback.

And yet, somehow, the AMG people have made this huge/heavy/high-riding Rhinoceros thing capable of doing things laterally that would probably result in the Outback or any other similarly jacked-up crossover getting daylight underneath its tires . . . just before it tips over. 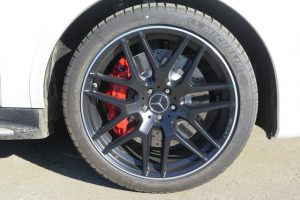 No doubt some of the credit for this is due to the steamroller contact patch of those massive 22 inch meats. If you look at the GLE 63 from the rear, it’s almost as if there’s one continuous tire running the entire width of the axle. AMG also developed an Active Curve system for the GLE coupe. The front and rear stabilizer bars are not the usual fixed-in-place things but instead have their tension adjusted looser or tighter via actuators, to keep body roll in check during high-load cornering.

The huge tires are also pronated inward slightly for the same reason.

The GLE can pull nearly a solid “g” on the skidpad (you can actually toggle up a display that shows you weight transfer as your corner) and – like the X6 M – it can run through autocross cones as adroitly as sports cars weighing half as much. It is big fun to hang on the bumper of a Mustang as it tries to leave you behind – and then roar past him coming out of that last curve before you reach the top of the mountain – the V8’s song peeling the paint off your rival. He will likely need years of therapy. 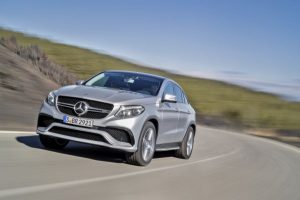 But all that clearance does have consequences.

Punch it up to speeds well in excess of the speeds an Outback is capable of and the GLE 63 gets a little twitchy.

This is not surprising, given all the air flowing underneath the Rhinoceros thing and those monstrous steamroller tires. And this is part of the entertainment value of the Rhinoceros thing; it keeps you paying attention – in the same way that running an old muscle car on 14-inch Cragars and bias-plys with overboosted power steering up to 120 or so used to.

It has the brute power to reach Ludicrous Speed – the speedo reads to 200 – but Mercedes electronically limits its maximum to 155 MPH, 5 MPH less than the X6 M (which sits a full inch lower to the ground). 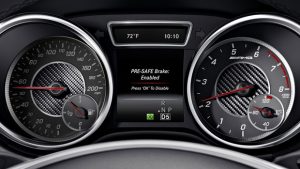 This may be the one rational thing about the AMG GLE 63.

Well, that and the standard 4Matic AWD system. Which keeps it in a straight line most of the time. If this were a rear-drive ride, you’d be going sideways as often as going forward.

That is the true reason for this being an AWD-only deal.

And the 9.1 inches of clearance? It keeps the debris of the Rhinoceros thing’s victims from hanging up on the floorpans.

Nature comes up with some weird designs – the Rhinoceros being one. It is a mammal that appears to be armored like a Pleistocene reptile. Other animals know to give the Rhino a wide berth. Not even a Cape Buffalo – which is a mean, obstinate beast – screws with a Rhino.

AMG/Mercedes really ought to offer a horn option. Not the beep-beep kind. The spear you through the guts kind. 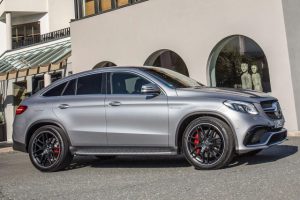 Maybe a little wiggle-piggy tail for the rear, too.

Preposterous as it is, the GLE 63 is more practical than you’d expect it to be.

The roofline is about three inches lower than the regular GLE SUV’s, so watch your head getting in. But  – surprisingly – the Rhino has almost as much headroom once you are in as in the not-swoop-roofed GLE SUV: 38.9 inches for the driver and front seat passenger and 38.5 inches for the people in the second row.

It also has three inches more legroom in the second row than the BMW X6 M. 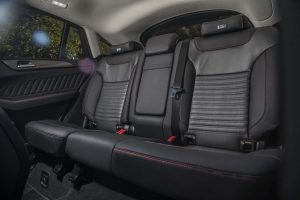 Cargo capacity is 60.7 cubes (second row folded; 23 with the second row in place) which is about the same as an E-Class wagon – and more than a Lexus RX350.

The rear liftgate opens hugely – almost like the nosecone of one of those Russian heavy-lift cargo planes. You could haul a refrigerator home, probably.

The interior layout is very down to business. Very little in the way of distracting gadgetry. There are even buttons for most things.

Mercedes does a better job than BMW of “backgrounding” elaborate electronics. Both the GLE and the X6 M have all the latest Stuff – including things like automated emergency braking and adaptive cruise control that can bring the car to a dead stop – and then get going again – without any intervention from the driver. But the Benz’s systems are less nannyish; I hardly noticed them at all during a weeklong test drive. The BMW’s systems make their presence known sooner and more insistently. Odd, given the BMW is supposed to be the driver’s car of the bunch. 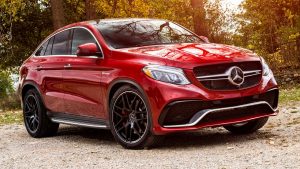 The most practical thing about the GLE is its civility. Unless you’re in Sport+ mode (which turns the thing into a straight-piped, catalyst-free, spark-spewing Teutonic berserker) your mom could drive it. No, wait. That’s not quite the right way to put it. Your mom would not be afraid to drive it.

In Comfort mode, it could be a jacked-up Camry.

And that is something.

The BMW X6 M is a berserker all the time. Your mom would not like driving it.

The two least-practical things about the GLE are the staggered-sized cupholders (one’s big, the other’s small) mounted in the center console, which – being designed by Germans – are too shallow on top of that and so it’s very easy to spill stuff. And the two all-but-impossible-to-reach USB plug-ins located inside the center console storage bin. 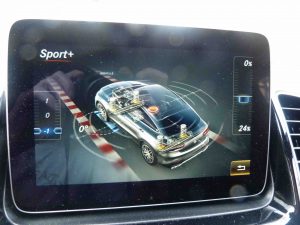 But the cupholders are heated – and cooled. And hey, you can get massaging seats!

The main problem with this thing is what it can do vs. what they will do to you if you do it.

The hulking body is one hell of a radar target.

On the other hand, with 9.1 inches of ground clearance, the AMG GLE can go places most cop cars can’t.

Even if you don’t buy one, you’ve gotta admire the idea of it. The audacity, the insolence.