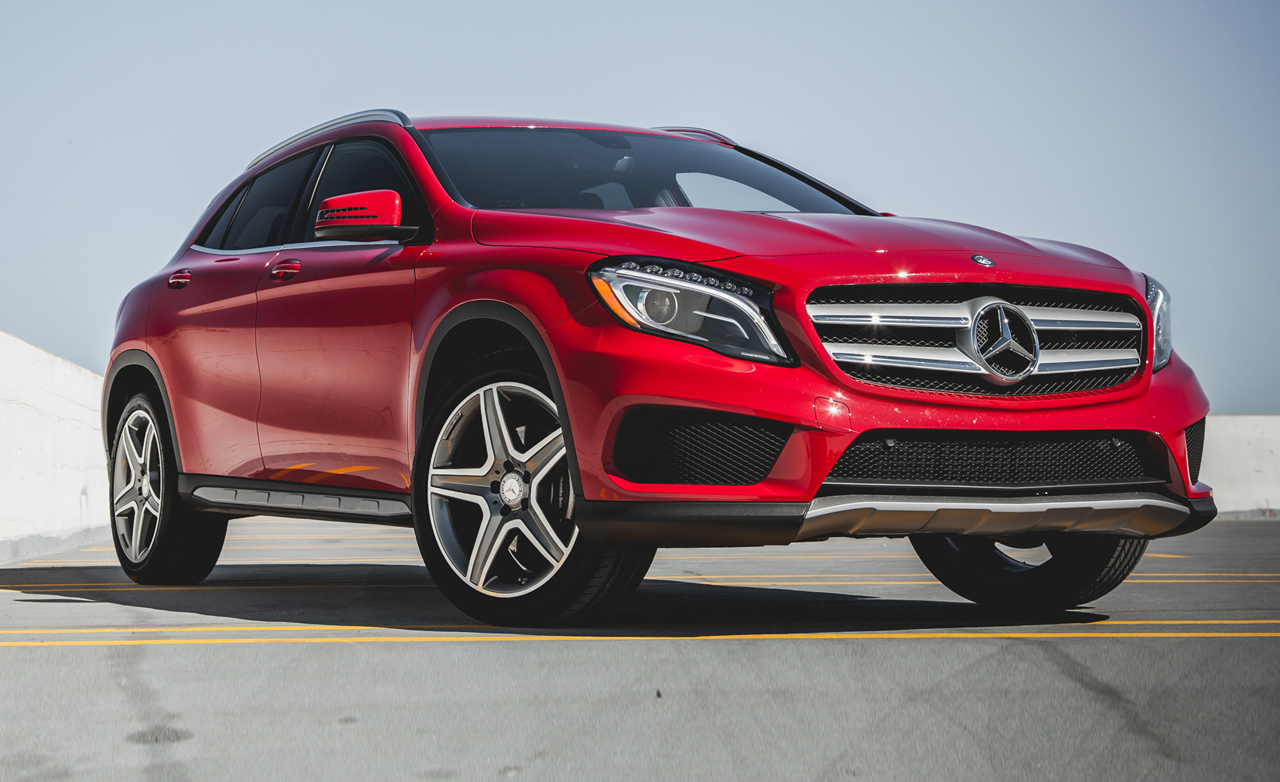 Everyone wants to get in on the compact crossover sporty wagon action – even Mercedes, which until recently refrained from entry, preferring instead to concentrate on coupes and sedans and SUVs (all of them built on rear-wheel-drive-based layouts). 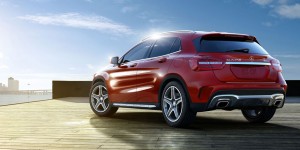 But there is a lot of money to be made selling small crossovers. Ask Audi – or BMW.

It’s a direct shot aimed at Audi (Q3) and BMW (X1). It’s much quicker – and slightly cheaper – than the Audi. Roomier, too. And newer than the BMW (the current X1 dates back to ’03) as well as sportier looking and handling than the more SUV-leaning X1.

Especially if you opt for the AMG version of the GLA (full review here) which – so far – has no peer in this class. 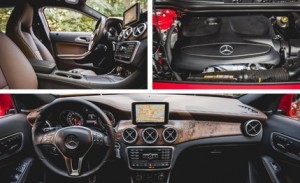 The GLA is Mercedes’ new compact crossover SUV – slightly larger (and noticeably roomier inside) than its closest rival, the Audi A3 and a bit smaller overall (as well as sportier looking and handling) than the BMW X1, a secondary rival.

For the ultimate GLA, select the GLA45 AMG – amped up to 355 hp (from 208) and capable of Ludicrous Speed whenever you so desire. 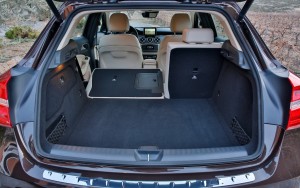 The GLA is Mercedes’ newest model.

Though “entry level” – as Mercedes-Benzes go – the GLA’s interior doesn’t look it.

And neither does the exterior.

X1 with optional turbo six offers an almost-as-speedy but-under-$40k alternative to the fabulous but also fabulously expensive AMG version of the GLA.

You expect the AMG ultra-performance version to have a stiff ride… but the standard GLA’s ride is pretty firm, too. My cheeks got sore after about two hours’ steady highway driving. 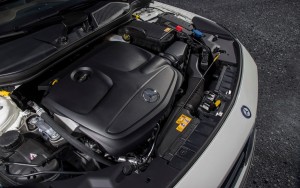 The GLA’s standard engine is a turbo 2.0 four. Rated output is 208 – which may seem a little weak given 260-plus hp Camrys (and 150 hp Corollas) but a steady infusion of boost maintains a stout 258 ft.-lbs. of torque from 1,250 RPM onward to redline. The result is a 7 second run to 60 through the standard seven-speed automated manual transmission – performance that is much better than the same-size-engined Q3, probably because its engine only makes 207 ft.-lbs. of torque and not until 1,700 RPM. It – the Audi – doesn’t get to 60 until 8 seconds have elapsed. A full second behind the Benz – and arguably insufficiently rapid for a vehicle with a base over $30k (which can’t out-accelerate numerous cars that start under $20k).

The X1 is a harder nut for the GLA to crack.

It also comes standard with a 2.0 liter turbo four (it’s a different design, but the same size because – apparently – 2.0 liters is a good balance between two small and too big; just enough displacement to deliver good power – without drinking too much fuel) that makes 240 hp – and a very impressive 260 ft.-lbs. of torque at the same (interesting, eh?) 1,250 RPM as the GLA’s 2.0 four. 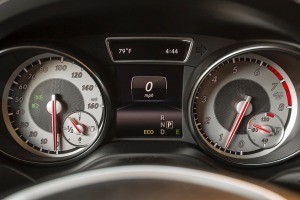 No surprise, the X1 is the quickest of the three with its standard engine, getting to 60 in about 6.4 seconds.

The regular GLA can be had in either FWD or 4-Matic versions – the latter of which scored 24 city,32 highway according to the EPA. This is significantly better than the front-wheel-drive Q3 (20 city, 29 highway) but not quite as good as the class-best X1’s 23 city, 34 highway (22 city, 32 highway with xDrive all-wheel-drive).

All the cars in this segment require premium unleaded for maximum power/performance – and economy. Burning regular won’t hurt anything, mechanically speaking; but you’ll notice a bit less verve (and lower fuel economy) as the engine’s computer dials back boost and so on to compensate for the lower octane gas. 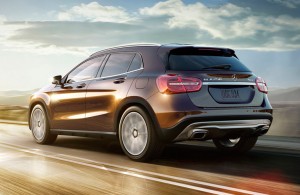 If you haven’t had a chance yet to drive one of these Mini-Me turbo fours (not just MB’s, but generally) it’s a must-do to update your automotive frame of reference. Small engines no longer suck – thanks to brilliantly applied boost-on-demand, which is always available whenever you need it. Turbo lag – like the four barrel carburetor – is a relic of yesterday. These new small turbo fours don’t pull or even sound turbocharged. They pull like bigger engines, without turbos at all.

And of course, they are small, so they don’t suck much gas when not pulling hard. Have your cake and eat it, too. This will likely mean The End for big sixes and eights, at least as common/mass-production powerplants. Because they’re no longer necessary.

Once people catch on… .

Suffice to say the GLA has plenty of get up and go. 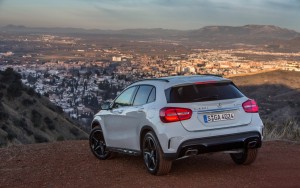 Of the three, the GLA is easily the most corner-eager. Perhaps because it is based on the CLA sport sedan – and isn’t trying (much) to be a crossover, let alone an SUV. It’s the least tall of the three – especially relative to the Q3, which rises up to 62.5 inches at the roofline vs. the GLA’s 60 inches – and it comes standard with an 18-inch wheel/tire package (the X1 comes standard with more-forgiving to your backside seventeens).

The downside is a ride that’s pretty firm – and that’s the non-AMG version. In comparison, the Q3 especially (and X1 also, but to a lesser extent) are softies. You’ll want to test drive the GLA for more than a five minute ride around the block before you commit – if your plans include five-hour road trips. This goes double-plus-true for GLA’s equipped with the Sport package, which adds an AMG-esque 19 inch wheel/tire package.

Those inch-high sidewall meats are great for lightning quick steering feel – but you’ll feel other things, too. 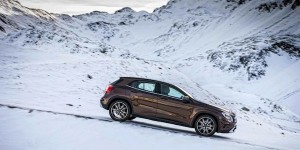 I had a chance to test out the GLA in severe weather – a foot of snow, much of it not successfully plowed due to savage arctic cold that made plow blades brittle and ineffective and rendered road salt useless. The GLA – mine had the 4-Matic all-wheel-drive system – was not humbled. I left the helpless (because FWD and fitted with “sport” tires) Mazda3 I also had that week buried in the driveway while I headed out in the Benz for provisions. It tracked true on heavily compacted, thoroughly frozen white-topped roads like it had studded (or chained) tires. A big help was the undercarriage clearance – which at 8 inches is actually pretty high for a sport wagon/crossover/sort-of-SUV. I mentioned earlier that the GLA is not tall. But it has a respectable amount of clearance nonetheless. That plus the snow/off-road mode for the auto-manual box and my own determination to not be denied or delayed on account of the white scheisse (or Clovers) got me through – and back.

The GLA is also adroit within tight confines, as when trying to slide into a curbside parking slot – another plus that derives from the car’s stubby (relative to X1) footprint. Turning circle – 38.8 inches – is almost exactly the same as the BMW’s (38.7 inches) but the BMW is several inches longer, which makes maneuvering it in close quarters a bit harder. 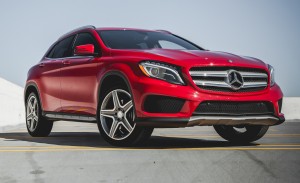 Mercedes has learned (from the 190 debacle) that entry level ought not to look entry level. And because the CLA does not, the GLA – which shares a common platform as well as an interior) doesn’t, either.

It is dramatic without trying too hard to be noticed.

Proportionally speaking, its length (173.9 inches) to width (71 inches) ratio is more “square” than the (longer overall but not as wide) BMW’s “rectangle” – which enhances the almost amphibian squat of the thing. The X1 looks like a crossover. The Q3 looks like a wagon. 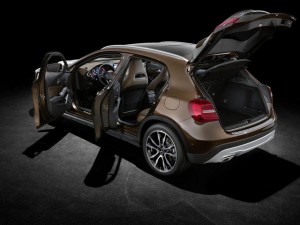 Interestingly – and notwithstanding the apparent function follows form design ethic – the GLA actually has more backseat legroom than the Q3 – and not by mere fractions of an inch. There’s 33.9 inches of it in the GLA’s second row vs. 31.3 in the more purportedly practical Q3. And – another surprise – the slope-roofed GLA’s got more cargo room, too: 17.2 cubic feet vs. 16.7 for the Audi. It’s not a huge difference, but still.

The BMW X1 has a littler bit more backseat legroom (34.9 inches) but the measure where it puts some real distance between it and the GLA – and even more so, the Q3 – is headroom. The low (and sloped-roofed) GLA has 40 and 38.4 inches in the first and second rows, respectively – vs. 41.3 and 39.7 for the BMW. Put another way, the BMW’s back seats have about as much headroom as the MB’s front seats. On the other hand, the Audi scalps them both – just 37 inches of headroom up front and 37.4 in the back. Notwithstanding that it stands 2.5 inches taller overall (62.5 inches vs. 60 for the GLA). 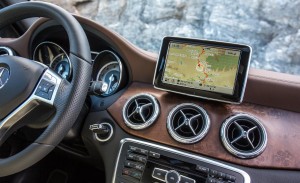 As far as the dash layout: As in the CLA, the centerpiece in the GLA is a wave-flowing main section with aircraft-style ball vents serving as handsome (and functionally superior) accent pieces. On the top of the center stack there’s a free-standing, 5.8 inch iPad-esque LCD screen (upgradable to a larger 7 inch screen) which displays an electronic-age interpretation of an old school radio dial as well as GPS and other info. The combined effect of these details is retro slick yet ultramodern.

There is no gear shifter per se. Instead, there’s a small stalk on the righthand side of the steering column you tap up and down to engage Drive or Reverse. To engage Park, tap the button at the end of the stalk. Everything is drive-by-wire, which is technologically most wow but I worry about what happens six or seven years from now after the contacts inside the gizmo get a little dirt on them… . On the upside, space is freed up on the center console, which features two very adequate cupholders plus an extra-deep cubby forward of these for really huge drinks. The seat heaters (part of the Premium package) are superb. They got hot and stay hot. Unfortunately, MB does not offer seat heaters for the backseats – an omission MB will probably want to address given you can get these in …. Hyundais. 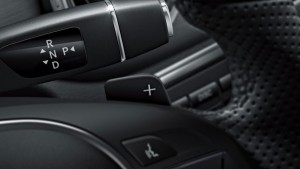 I wish MB would offer this unit with a driver-controlled manual transmission. Automated manuals have become extremely popular for efficiency and performance reasons, but they are part of an ugly trend to take the driver out of the equation of driving. BMW officials have actually admitted this openly – and (being Germans, too) the MB deciders probably share the sentiment. Efficiency uber alles, you see. Yet, the GLA would be so much more fun with a clutch pedal to the left of the brake – instead of clutches (plural, there are two in the auto-box) buried in the transmission and controlled not by you.

A diesel engine would be interesting, too.

Mercedes has just the one – the 2.1 liter BlueTec unit that’s now the standard powerplant in the E sedan. It makes 195 hp (virtually the same as the GLA’s 2.0 liter gas turbo) and a very healthy 369 ft.-lbs. of torque (100-plus ft.-lbs. more than the gas turbo 2.0). In the E – which is heavier than the GLA – the 2.1 liter turbo-diesel gets the package to 60 in 7.6 seconds (only slightly less quick than the 2.0 gas engine delivers) while delivering 28 city, 42 highway – 10 MPG better than the lighter GLA manages. Can you imagine what the 2.1 BlueTec diesel would be capable of in the GLA? It would probably be quicker than the gas-engined GLA – while also returning even more impressive economy. I’d bet at least 45 on the highway. 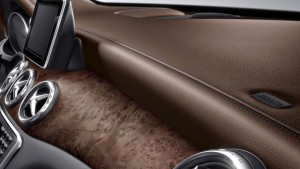 Mercedes has priced the GLA aggressively – to undermine the Q3 (which doesn’t offer anywhere near the performance – or the space) while enticing the BMW X1-inclined. But it’s also different enough, both in terms of looks and function and vibe – to not be taken (or left) solely on the basis of what it costs relative to its rivals.

For a change, you have a real choice.

I think it’s going to do well.