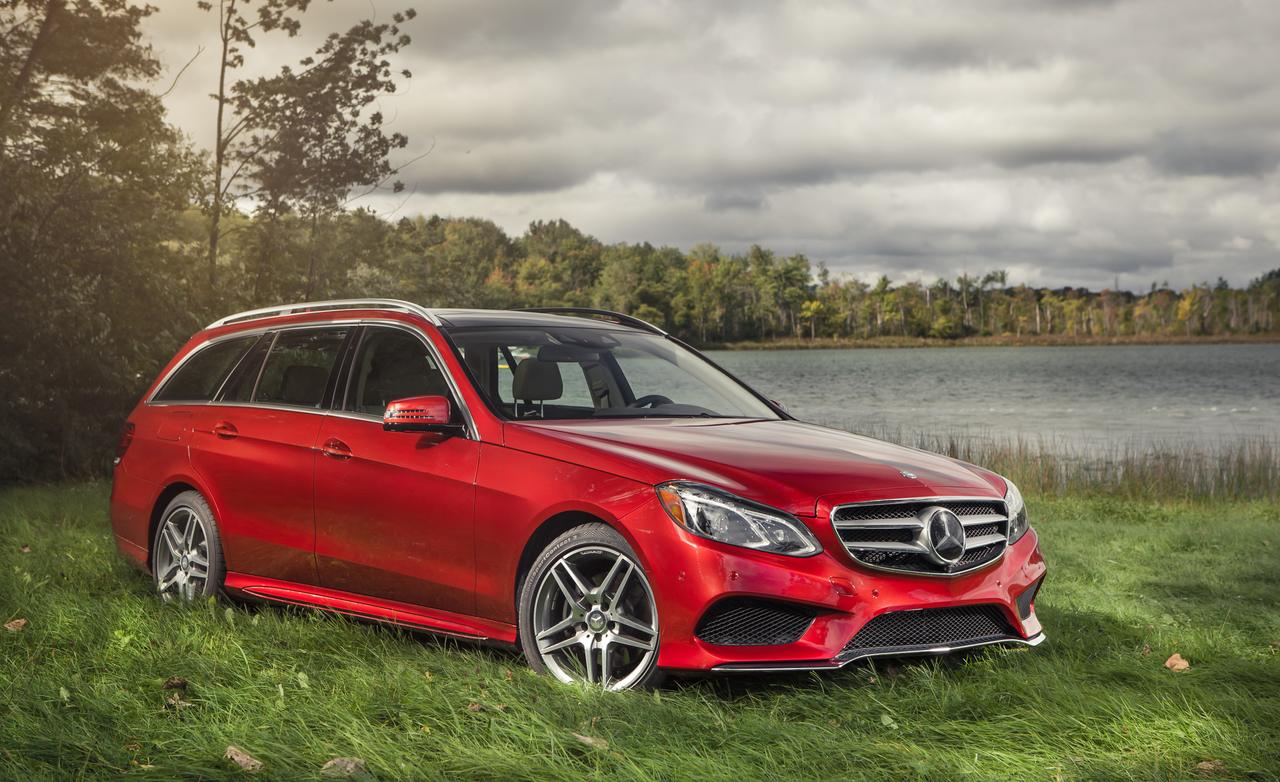 The E-Class Mercedes has – or can be ordered with – just about whatever you could possibly want. 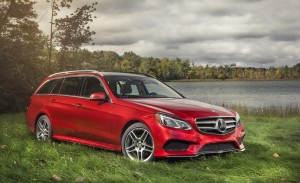 Just not always in the same model.

If you want an E wagon, for example, you can order a death-dealing 577 hp twin-turbo V-8.

But you’re out of luck if you want the 42 MPG-capable 2.0 liter Bluetec turbo-diesel four.

On the other hand, all E wagons come standard with all-wheel-drive.

But in the E sedan you can get both together.

If Mercedes would do the same for the wagon, it’d be like nothing else on the market. 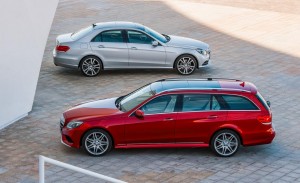 The E-Class is Mercedes wagon is one of a very few rear-wheel-drive-based (and V-8 available) mid-sized luxury-sport wagons you can buy new in the U.S.

BMW no longer sells a wagon version of the size-equivalent 5-Series (you can buy a 3 Series wagon, but it’s a much a smaller car; the 5 Series GT, meanwhile, is a hatchback).

The Audi All-road (basically a wagonized version of the A6) comes only with a four-cylinder engine – and it’s built on a FWD-based (and FWD-biased) layout.

Cadillac’s CTS wagon is probably the closest cross-shop in that it’s almost exactly the same size as the E-wagon and like the E-wagon, it’s built on a RWD-based layout and comes standard with a V-6 engine, with a powerful V-8 available optionally (in the high-performance CTS-V). 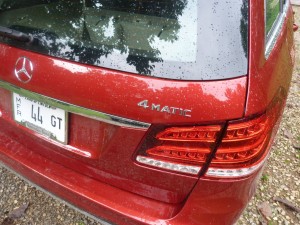 Reportedly, Benz will replace the E-sedan’s currently optional 4.7 liter V-8 with a much smaller, more fuel-efficient twin-turbo V-6, due to the V-8’s being too hungry for gas. The same pressure may also result in Mercedes offering the BlueTec diesel four in the E-wagon.

While it’ll be sad to see the V-8 go away, if the turbo-diesel four comes online across the board, it’ll be welcome news for people who like the idea of fantastic efficiency without giving up great performance to get it. 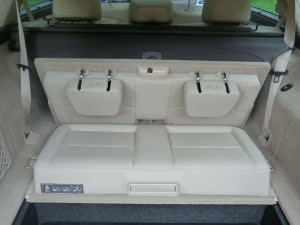 Steroidal V-8, if that’s not enough.

Thirsty. High teens in the city with the V-6.

No diesel for you.

Not yet, at least. 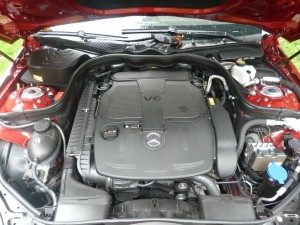 Both engines are paired with seven-speed automatic transmissions and all-wheel-drive, but the E63 gets more aggressively set-up versions of both.

That time is significantly quicker than a CTS-V’s time (4.3 seconds), which is interesting given the stated hp numbers are so close. Even more interesting, when you take a look at the cars’ respective curb weights.

And yet, the Benz is a lot quicker. 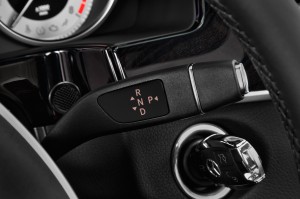 This reminds me of the late ’60s, when published vs. actual horsepower output was sometimes fudged one way – or the other. It could well be that the Benz V-8 makes more than the stated 550-577 hp.

We can only hope so.

Strangely, Mercedes does not – currently – offer the excellent 2.0 liter turbo-diesel four that became available this year in the E-sedan (replacing the 3.5 liter gas V-6) in the E-Class wagon. 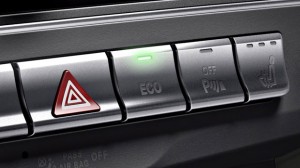 In a large, heavy car with an automatic transmission, torque matters because it is torque more than horsepower that gets the car’s mass moving. Although the gas-engined E-wagon is quicker than the diesel-engined E-sedan (which gets to 60 in just over seven seconds) the diesel’s bull-like off-the-line (and part-throttle) pull is extremely satisfying.

Also gratifying is the diesel’s range – nearly 1,000 miles of highway driving on a tankful. The gas-engined E350 can only go a bit more than half that distance (548.6 miles) on 21.1 gallons of premium unleaded. This is an important-to-bear-in-mind point. Yes, diesel fuel costs more than gasoline … than regular unleaded gasoline.  But if the comparison is premium unleaded (which the 3.5 liter V-6 requires) vs. diesel – the cost-to-feed difference between the two is negligible. 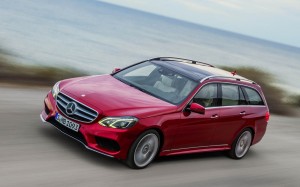 Wagons are wonderful – but under-appreciated.

In Europe, wagons are as popular as sedans – and every major major manufacturer sells several.

Here, they only sell a few.

The why has to do with American tastes, which regard wagons as dowdy. Which is silly, given wagons like the E63 (and CTS-V). In fact, it’s downright retarded. Because it’s far more feasible to drive an E63 or CTS-V as it was meant to be driven – and not end up in jail – than it is to do the same stuff in the same car that happens to be a sedan.

Precisely because wagons are viewed as  dowdy – by cops as much as most not-cops.

They do not fit the profile – and this is valuable beyond measure. It means you’re less likely to get pulled over. And if you do get pulled over, your chances of being given the Third Degree are probably less. 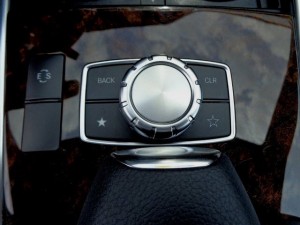 The 302 hp produced by the gas V-6 is – as they say – certainly sufficient. More sufficient, indeed, than the much-less-strong turbo four (gas) in the much smaller BMW 3 wagon (the only U.S. market-available wagon BMW sells) as well as much smaller turbo four (also gas) used in the (roughly) same-size Audi A6 AllRoad. The CTS packs more power – 318 hp (with the optional 3.6 liter V-6) but it also packs a lot more curb weight, as already described.

The seven-speed automatic is controlled via a “three on the tree” style toggle – which is much easier to use than a three-on-the-tree column shifter. Just flick it downward to engage drive. Tap the button on the end of the stalk for Park. It’s easy – and it’s smart. Because it frees up room on the center console that would otherwise be taken up by a floor shifter. There are “Eco” and “Sport” modes (E63s get a different – much more aggressive set-up) with paddle shifters on the steering wheel for manual control of the gear changes, if you like. 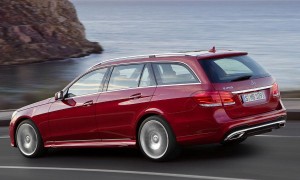 An E-Class plus (whether it’s the sedan or the wagon) is the car’s superb visibility, thanks to lots of glass and not many things getting in the way of your line of sight (such as thick “A” and “B” pillars, or tunnel vision rear glass, or over-tall/over-wide and just too damned big second row headrests that make it next to impossible to see much of anything behind you). The Benz has electronic aids – such as a Lane Keep Assist system that uses a camera to monitor the yellow and white lines and will automatically course-correct for you if you don’t notice you’re wandering over the double yellow (or off the road) as well as a blind spot monitor and also automatic emergency braking. But – assuming you’re paying attention – these should serve as fail-safes rather than your primary means of avoiding bent metal.

One weird thing I found out about – by accident – is that the car is programmed to throw the transmission into Park if you happen to open the door while the car is moving. Coming home one day, I saw that the paper delivery dude had tossed the newspaper on the driveway – so I opened the door (with the car barely moving) to snatch it up. Unpleasant noises ensued. Luckily nothing was hurt. But be advised. If you’re old-school and like to back into a spot by cracking open the door and looking backward as you back up – instead of looking at the now-mandatory back-up camera inside the car – you might cripple your transmission. 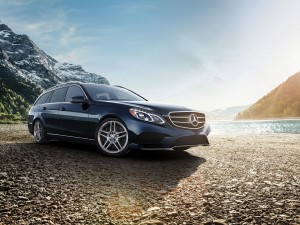 It’s not easy to make a wagon look sexy, but Benz pulls it off.

However, the Mercedes has a much more viable back seat when it comes to headroom. In fact, there is more headroom in the second row (39.8 inches) than there is in the front row (38.3 inches) and vastly more – by nearly 3 inches – than in the CTS’ second row (37.1 inches).

The Benz also has a third row. A row of rear-facing jumpseats, actually. 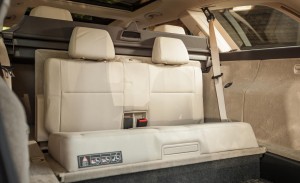 Tucked underneath cargo floor. Pull ’em up when you need ’em. Fold ’em away when you don’t.

They’re small – and for kids-only. But they do give the E some additional human-carrying capability that the CTS lacks.

It should be mentioned here that the BMW 5 Series GT (don’t call it a hatchback) actually has more total cargo capacity (60 cubic feet) than either the E wagon or the CTS wagon.  However, the hatchback’d BMW – though it has a clever “two-way” opening hatchback (one section lifts up, another folds down) can be more of a challenge to fit things in, due to the more hunkered down/tunnel-shaped bodywork and less-conventional opening. 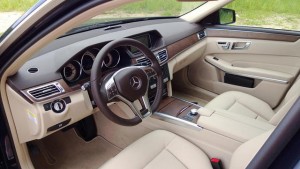 Both are priced the same, but emphasize different qualities. The Luxury trim, for instance, rides softer on 17 inch wheels and all-season tires – while the Sport comes with larger 18 inch wheels with stiffer sidewall “sport” tires. Lux trims also have a more traditional “flying” Mercedes three-pointed star hood ornament while the Sport trims get a large grille-mounted star.  Sport trims also get firmer baseline suspension calibrations (both get adaptive suspensions that adjust to varying driving styles and conditions) and white faced chronometer-styled gauges – which are analog and not digital/flat screen (as in the S Class).

Wagons come with a power liftgate, but it does not overpower you. Meaning, it does not force you to wait while it opens (slowly) and closes (again, slowly). You can manually throw it open – and hurl it closed – with just as much ease. The electric  actuators will not interfere – and (even better) there are no dinging bells – safety! safety! safety! – accompanying the open-close process. 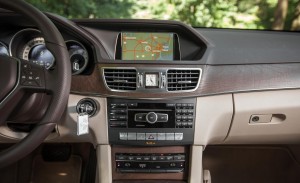 You can opt for massaging seats – which is unusual at this price point. They’re mostly available only in cars pushing six-figures. It’s nice that Mercedes offers them in a car that’s more accessible.

Heated seats are included with the optional Premium package (and are top drawer; they actually heat your backside rather than merely warm it up a little), which also adds a 14-speaker Harmon Kardon surround sound audio upgrade with hard drive music storage.

Another item of coolness is being able to surf the web (albeit with limited functionality) from within the car. Click on “Mercedes Apps” and then “Internet” and use the manual keypad to type in the URL. 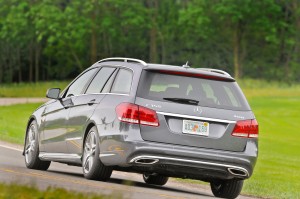 It’s a beautiful and extremely pleasant as well as versatile car, but that’s a lot of coin – when you pause to reflect that a CTS-V (with pretty much everything you’d get in a regular CTS, plus the storming 556 hp supercharged V-8) costs about $10k less.

And if we’re just talking CTS sans V (and V-8) the difference in bottom line MSRP, comparably equipped, can be in excess of $20k.

The Audi Allroad is also a very appealing wagon – even if they don’t call it a wagon.

Ditto the BMW 5 GT – though it’s far from being a cheap date, either.

I hope that Benz plans on trotting out an E250 wagon – with the BlueTec diesel – next year.

It’s the only thing missing from this car – as I see it.