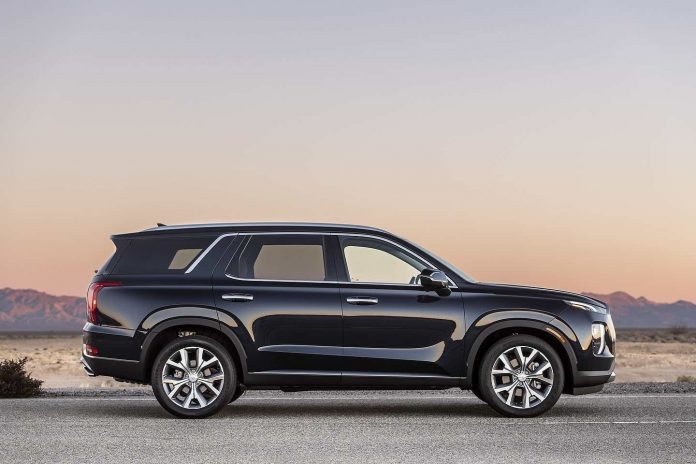 The Hyundai Palisade and Kia Telluride have different names – and are sold under different labels. But they’re made by the same company – Kia being  part of Hyundai in the same way that GMC is part of GM and Lexus is a division of Toyota.

And they’re mostly the same vehicle.

This is a common practice. A GMC Sierra is the fraternal twin of the Chevy Silverado; the Toyota 4Runner and Lexus GX460 are essentially the same under their skins.

The question is, why practice it? 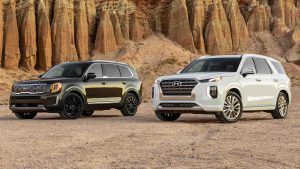 The reasons are two-fold.

First, there usually are differences – ideally, enough to make a difference. These difference  might not be mechanical – but appearances (and available equipment) as well as price can make a big difference.

And those differences make it possible to differentiate a Kia from a Hyundai – and market them each to different buyer demographics – without  Hyundai (the parent company) having to design and build two entirely different models. Which saves them and – ultimately, the customer – money.

So how about those differences? 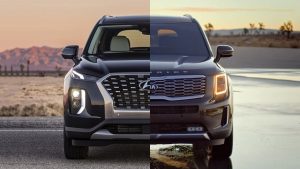 The Palisade is the Hyundai-badged (and styled) version of the Kia Telluride, which is a full-size/three-row crossover SUV

Or the other way around, if you prefer.

Both are mechanically identical but visually very different – and not just grille-wise.  The Kia is slightly longer and wider overall and has a little more ground clearance (when ordered with its optional all-wheel-drive system). It also has more side glass area – and a little less cargo room.

There is also a price – and trim difference. 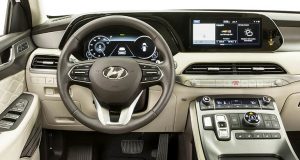 For which difference you get a 12 rather than a 10 speaker audio system, a digital main gauge cluster and a self-leveling rear suspension system (available a la carte with the Kia). 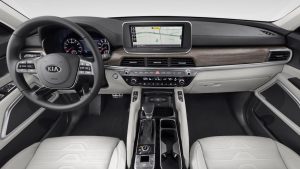 Both offer an eight (or seven, you pick the configuration) seat alternative to much larger, much more expensive truck-based SUVs like the Chevy Tahoe and Ford Expedition.

The Palisade (and Telluride) are both new models and the largest models offered so far by their parent company.

Same standard V6 as the Telluride’s.

Has a little less cargo space than its brother.

Is higher-priced than its brother.

Fewer trims to pick from. 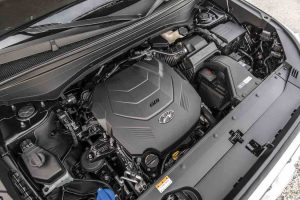 One area where there’s no difference between the Palisade and the Telluride is the engine compartment.

Both come standard with the same 3.8 liter V6 that makes the same 291 horsepower and 262 ft.-lbs. of torque. The V6 is paired with the same eight speed automatic transmission and your choice of either front-wheel-drive or all-wheel-drive.

There is, however, a difference in gas mileage – which is interesting given that the mechanicals are 100 percent identical. 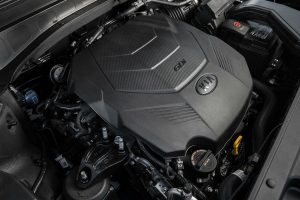 Yet, the Hyundai version of this full-sized crossover carries an EPA rating of 19 city, 26 highway for FWD models and 19 city, 24 highway for the AWD-equipped version. The same-engine/same-transmission Telluride carries a 20 city, 26 rating for the FWD version.

It’s not a big difference – but it goes to show that even when things are the same, they’re sometimes a little different. 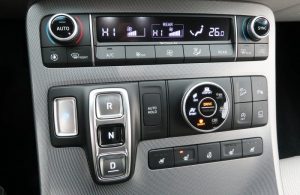 Like the Palisade’s shifter, for instance. It connects to the same eight-speed automatic, but via pushbuttons rather than the selector lever in the Telluride.

Another difference of perhaps more interest is the Hyundai/Kia’s mileage vs. that delivered by turbo four cylinder-powered rivals like the VW Atlas and Subaru Ascent.

Which isn’t much higher – and in the case of the VW, less.

The four cylinder Atlas carries an EPA rating of 20 city, 24 highway – and its turbocharged 2.0 liter engine only makes 235 hp. It also can’t tow 5,000 lbs. If you want to do that in an Atlas, you’ll have to buy the optional V6. Which’ll cost you more than the Palisade’s standard V6. 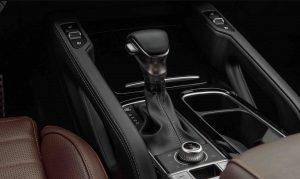 But, it also comes standard with a turbo – and intercooler. The Hyundai doesn’t and so it won’t ever cost you to replace the extra parts it hasn’t got.

Another turbo-four-only rival, the Mazda CX-9, maxxes out at 3,500 lbs. of towing capacity and 250 horsepower – if you use premium unleaded. If not, the Mazda’s 2.5 liter engine produces 227 hp.

The Palisade’s V6 is a regular unleaded engine. 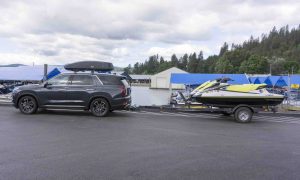 Probably the closest shave for the Hyundai – and the Kia – is the Honda Pilot, which also comes standard with a V6 (280 hp) and a lower price to start ($31,550). The big difference here is the hunkier, more SUV-than-crossover-SUV styling of the Palisade/Telluride.

Also – and this is interesting, too – the base trim Pilot LX is only rated to tow 3,500 lbs. even though it has the same V6 as the higher-priced trims – which are rated to pull 5,000 lbs.

The Palisade, like its Telluride brother, feels stronger than most of its rivals – because it is.

And as it comes. 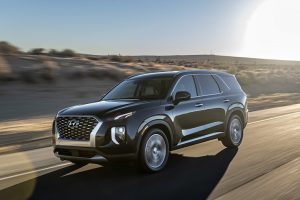 There’s a big difference here, especially vs. rivals like the Atlas that come standard with much less powerful engines – with optional engines that aren’t more powerful than what you don’t pay extra for here.

It also feels more like an SUV than a crossover SUV. In other words, less like a high-riding wagon and more like a truck-based, heavier-duty rig – with one difference. The big V6 isn’t a big V8. It’s powerful but not V8 powerful and it doesn’t sound like a V8. Then again, some truck-based SUVs no longer offer a V8, either (that’s you, Ford Expedition). But they do come standard with a much higher MSRP.

The Palisade is a big vehicle – but not an enormous one. 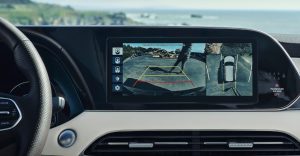 Even though it has three rows of seats and room for up to eight people, the Hyundai’s overall length (196.1 inches) is about the same as that of a Toyota Avalon sedan (195.9 inches) and considerably less than that of a space-inside-comparable large (and truck-based) SUV like the Chevy Tahoe – which is 204 inches long overall.

The Tahoe’s base price of $46,800 is another big difference.

Other differences – vs. other crossovers – include much larger than usual digital displays for the cabin temperature settings, which makes them much easier to read at a glance and so less need to glance away from the road.

This is a small thing that’s a big thing. 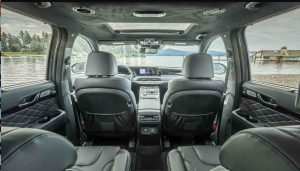 Similarly the larger-than-usual pushbuttons on the center stack and center console, which are easier to accurately depress when the vehicle is moving. This is a design philosophy that should be the same in every vehicle, regardless of brand.

Like almost all new vehicles, the Palisade as automatic stop/start (ASS) but unlike many it’s almost unnoticeable. The off-on transitions aren’t paint-shaker-like and because of this, you may not feel the urge to turn ASS off (which you can, by pushing a button on the center console). 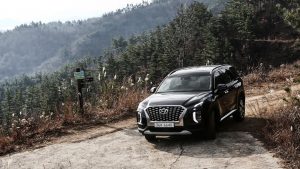 Hyundai-Kia has done an exemplary job of making lemonaid out of lemons. ASS being the lemon, served to you by the government but sold to you by the car companies, who’ve been forced to add it to their vehicles for the sake of complying with federal fleet average fuel economy decrees. You, the owner, may “save” 1-2 MPG overall – at the probable long-term cost of decreased 12V starter battery life, possible reduced alternator/starter life. The car company saves getting socked with fines for not “complying” with the federal fuel economy decrees, which would otherwise be reflected in higher MSRPs.

But you get the bill, either way. 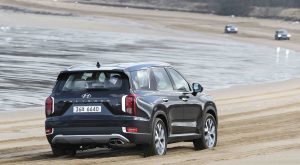 Like other crossover SUVs, the Palisade isn’t designed to go seriously off-road, even though it looks like it could. But while it lacks the 4WD Low range gearing of a truck-based SUV like the Tahoe and Expedition, it has the ground clearance – eight inches – and that can make all the difference in the snow, on-road.

You can also lock the AWD to maintain a 50-50 power split, which will get you through almost anything, provided there’s pavement underneath.

And the right tires on those rims.

You have to look beneath the skin to find the commonality between the Palisade and the Telluride. 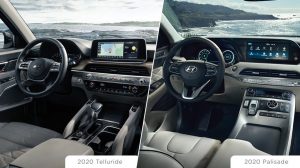 They’re very different on the outside – and the inside.

Each has its own dashboard and gauge layout as well as an entirely different center console. In the Palisade, it curves upward to meet the dash; in the Telluride, you get grab handles on either side and a more rugged rectangular shape.

You get a choice of the same thing.

There’s also a difference in terms of cargo space – and not just vs. each other. Both have more total cargo space than others in the class, including even the previously class-leading Honda Pilot. 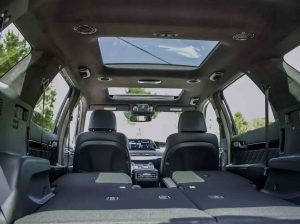 Also of interest is that either of these two offer nearly as much cargo space as you’d find in much larger-on-the-outside, much more expensive truck-based large SUVs like the Tahoe, which actually has less cargo space (15.3 cubic feet) with its third row in place. You have to lower the third row to get the full 94.7 cubic feet the Chevy offers.

Which row is also less passenger-friendly than the Palisade’s (and Telluride’s) because the Tahoe is a truck-based SUV and because of that the floor has a bump (to accommodate the rear axle) and thus the people who sit back there sit with their legs awkwardly tucked upward. 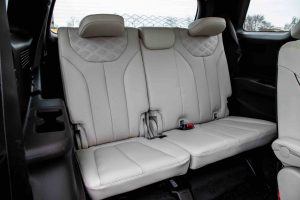 The Palisade (and Telluride) are more like . . . minivans in terms of their interior seating layout and the comfort/spaciousness of that layout.

Just without the minivan.

It’s why large crossovers have largely replaced the minivan. Same thing, basically. But with an important difference. 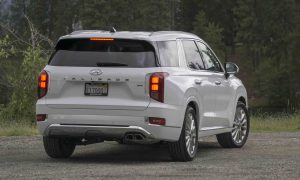 The Palisade comes standard with the same class-best warranty coverage as its Kia brother-from-the-same-mother: Five years/60,000 miles on the whole thing; ten years/100,000 miles on the things which make it go (engine and transmission).

You also get free maintenance for three years/36,000 miles – which is as long as some others warranty their vehicles.