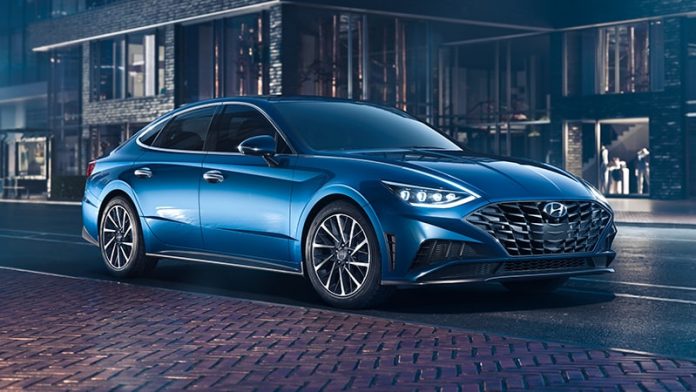 When you can’t sell practical anymore, it’s time to start selling something else.

Mid-size sedans like the Toyota Camry, Honda Accord and Hyundai Sonata used to be top sellers – largely on the strength of their family car credentials. But crossovers – with their two or three-times-as-much cargo room and (usually) available all-wheel-drive – have made huge inroads into the family car market.

This probably explains why mid-size sedans like the Camry, Accord – and now the new Sonata –  have become so sexy.

But will it be enough to prevent their going extinct? 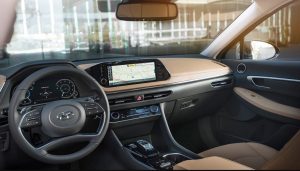 Like its primary rivals – the Camry and Accord – the “mid-size” Sonata is almost a full-sized sedan in terms of its overall length.

And its interior spaciousness.

Which brings up something else. The Sonata has also become a de facto luxury sedan in almost every way – except price.

And the lack of a heated steering wheel. For now.

Most of all, the Sonata has also been restyled to summon interest.

It doesn’t look like everything else. Fundamentally, it’s more about the drive and how it makes you feel than how many bags of groceries/gym bags will fit behind the back seats.

The only thing missing – and just for now – is performance. 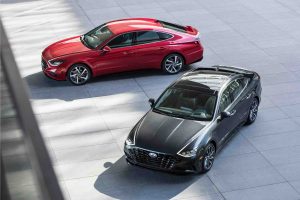 Prices start at $23,400 for the SE trim with a 2.5 liter engine and eight-speed automatic transmission.

It comes standard with an updated version of the 1.6 liter turbocharged engine that’s the same size as the optional engine in last year’s Sonata – but bumped up to 180 hp from last year’s 178.

A hybrid version will appear later in 2020.

Everything. Pretty much the only thing that carries over the same is the name.

Stretch legs ; the Sonata has more legroom for the driver and front seat passenger than a limo-sized (and six-figure) Mercedes S-Class.

About an inch less backseat legroom than last year.

Much less space for cargo than a same-size crossover.

Not as powerful as Camry/Accord with their optional engines… for the moment. 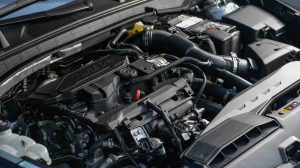 The horsepower numbers of the Sonata’s new and slightly larger 2.5 liter engine (no turbo) and its optional 1.6 liter engine (with a turbo) are so close – 191 and 180 hp, respectively – you might wonder why not just offer one  . . . or the other?

Because of the torque. 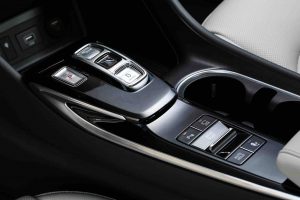 Official figures for the 2020 Sonata weren’t available when this review was written in early December of 2019 – but should be in the ballpark of 28 city, 37 highway (the stats for the ’19 Sonata with the 1.6 engine).

With either engine, the new Sonata gets to 60 in about 8 seconds but the 1.6-equipped Hyundai feels stronger because its torque swells sooner. The larger engine sounds like it’s working harder, too – because it has to rev higher to produce its maximum thrust potential.

But, which will last longer over the long haul? Not the next ten years (during which you’ll be covered by Hyundai’s class-best drivetrain warranty anyhow) but over the next 15 or 20? Modern cars last that long routinely.

How about modern – heavily turbocharged – engines?

We will have to wait and see.

One thing that’s for sure right now is that the ’20 Sonata needs more engine. Or at least, more power. Both of its currently available engines are outclassed by the engines available in the Camry and Accord. The Toyota offers a 3.5 liter V6 (last one n the class) with 301 horsepower; the Accord’s optional engine is a turbo 2.0 four with 252 hp. 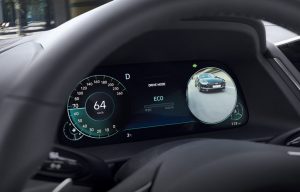 The V6 Camry can get to 60 in about 5 seconds – which is three seconds sooner than the 1.6 Turbo Sonata.

But there is good news . . . in the pipeline. By spring, you’ll be able to order the new Sonata with a third engine. A turbocharged version of the 2.5 liter engine that makes 290 horsepower and 310 ft.-lbs. of torque.

This one ought to close the gap.

The bad news is that Hyundai has gone all-in on direct injection, regardless of engine. This is a government-caused plague of mechanical Rube Goldbergism – gratuitous complexity – for the sake of slight gains in mileage and slight reductions in emissions.

And it may not even really be about that.

There’s a persuasive argument to be made that Rube Goldbergism is the point – to complexify  (my neologism) the non-electric car out of existence – or at least, viability.

In order to nudge everyone into electric cars – or onto the bus. 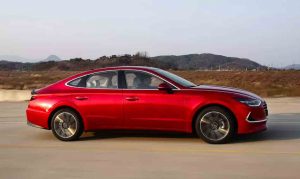 One of the draws of crossovers is that you sit higher up – which used to be a visibility advantage, until crossovers became as common as sedans used to be. It’s no longer much of an advantage – because you’re surrounded by other crossovers, also high-riding.

And you’ve lost the handling/stability advantage of being closer to the road.

The Sonata has the superior stability that comes with being several inches closer to the pavement as well as the superior visibility of its fastback rear glass and lower trunkline. It’s at least as nice to be able to see what’s behind you as well as what’s ahead of you. 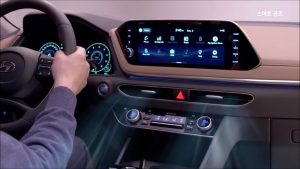 It also makes parking easier, without depending as much on a back-up camera.

The electric-assisted power steering feels a bit disconnected but it’s accurate – and more important, the rest of the car isn’t electric. Which means it can travel 400-plus miles on a tank of gas and you can conveniently refill that tank to full in less than five minutes, without spending $1,000 to install a “fast” charger in your garage that instills an 80 percent charge in 45 minutes, enabling you to travel maybe 200 miles.

The Sonata, like most of the cars in its class, doesn’t offer all-wheel-drive. But it’s arguable that AWD has been oversold, by playing on people’s fear of snow-driving and by convincing them that it’s “unsafe” to drive in the snow without AWD.

In fact, it’s mostly a question of being able to drive that’s determinative. 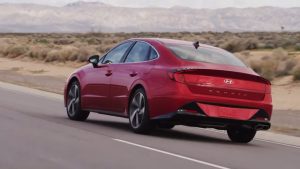 A front-wheel-drive car is actually a great material for a snow-day drive, if you have the right tires for snow-day driving. A FWD car shoed with snow tires will do better in the snow than an AWD car riding on sport tires – which many of them do.

That’s the real key as far as not getting stuck – but a set of snow tires costs a lot less than AWD, so guess which gets hard-sold as the gotta-have-it? 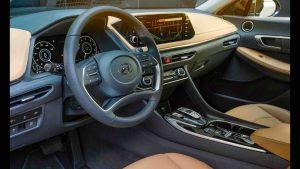 The new Sonata is longer, wider – and much roomier.

And it’s a looker.

Or rather, it doesn’t look like everything else – high praise these days. The fastback punctuates in a beveled ducktail trunklid that interestingly integrates the lip spoiler with the tail/brake lights.

Viewed head-on, it has the mien of a puff-adder. One almost expects it to hiss. 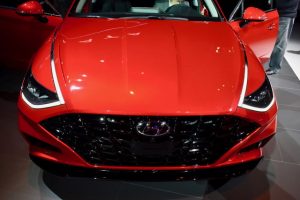 It also has 46.1 inches of legroom up front – which is almost five inches more legroom than a Mercedes S-Class, which has 41.4 inches.

The Sonata also has some other things you wouldn’t have found in anything less than a six-figure Mercedes just a few years ago, including an available 12.3 inch flatscreen instrument cluster paired with a 10.3 inch touchscreen off to its right for the car’s secondary systems, a Heads-Up Display on top of that – and a key-fob remote-park feature that maneuvers the car into place without you behind the wheel.

This latter system is designed to let you make use of very tight parking spots you otherwise couldn’t get into – and be able to get out of the car. This level of tech was the stuff of science fiction as recently as 2010. 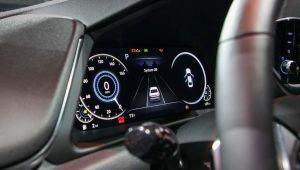 And now it’s available in a Hyundai.

One of the functionally useful aspects of the LCD main display is that multiple displays can be displayed in the same space. In this case, the digitized speed toggles to your rearward view, which is preferable because it’s in the driver’s line of sight rather than off to the right (in the center stack, where most cars display it).

One of the downsides is that everything is displayed – or not, if (when) the LCD display croaks. But just as air conditioning and heated seats went from being high-end luxury car features to givens in almost every car, so also flatscreen displays are replacing physical/individual needle-type gauges. 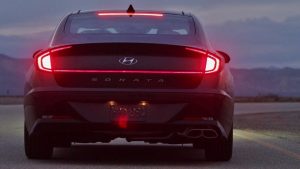 Just a few negatives detract from this otherwise appealing package.

One is that there’s less backseat legroom than before (34.8 inches vs. 35.6 inches). Another is that Hyundai elected not to offer a heated steering wheel – even in the top of the line Limited trim. This is a glaring omission, because heated steering wheels are becoming what heated seats were, ten years ago.

Something expected – in run-of-the-mill cars. 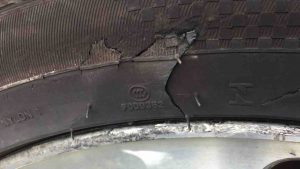 The good news is that Hyundai ought to be able to add this feature without much trouble. Hyundai may be withholding this feature – the plan being to include it with the N-Line version of the Sonata that’ll be coming out in a few months with the 290 hp engine and other upgrades, including the possibility of an adjustable suspension.

On thing you get right now, regardless of trim, is a spare tire. Not a full-size spare. But a spare. As opposed to a inflator kit – which many new cars have to save space and weight but which are as useless as a canoe in the desert if you have to deal with a sidewall puncture.

Sedans are in trouble. But this may be the way to get out of it.