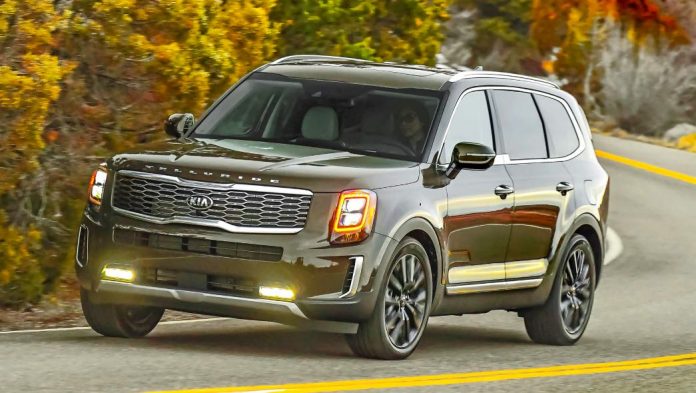 And for once, under the hood to go with it.

Kia’s new Telluride is much bigger than the mid-sized Sorento it replaces. But unlike most of its rivals, it doesn’t come with a smaller engine.

The Telluride is Kia’s newest – and largest-ever – model.

It’s a three-row/eight-passenger crossover SUV that has a higher standard tow rating (5,000 lbs.) than any Kia made before it weighed. 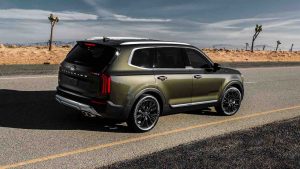 A 3.8 liter V6 is standard in the Telluride – vs. the much smaller turbo fours that come standard in most of the current crop of plus-sized crossovers, including the VW Atlas – and which are the only available engines in large crossovers like the Subaru Ascent and Mazda CX-9.

And the Kia’s big six doesn’t use more gas. 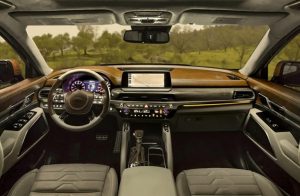 Ironically, the less-likely-to-break Telluride has the longest-running powertrain warranty of them all: Ten years or 100,000 miles.

Prices start at $31,690 for the base LX trim with front-wheel-drive; the same trim with the optional AWD system stickers for $33,690.

No upsell on the engine to get the AWD. 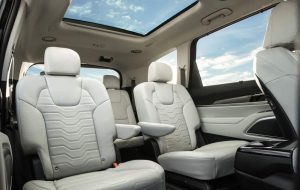 ASS (and various “assists”) are standard.

AWD comes standard – for less – in the Subaru Ascent.

It’s getting hard to find a V6 in a crossover SUV – unless you pay extra for it. Which in most cases you’re forced to do – if you want AWD.

Assuming a V6 is even still available.

In the Telluride, it’s standard. 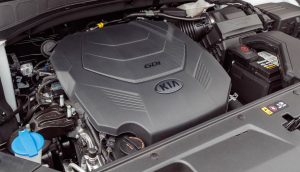 The Kia’s standard engine is also stronger than the VW’s optional 3.6 liter V6 (276 hp) which you have to buy if you want AWD – which isn’t offered with the standard four. 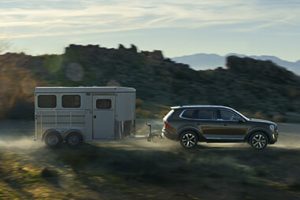 The four cylinder Atlas is a nice rig but it hasn’t got very broad shoulders as it comes; the standard tow rating is just 2,000 lbs.

Looked at another way:

You could take home a Telluride with AWD and still pay a couple thousand less than VW wants for the FWD V6 Atas.

And no matter how much you pay Mazda, the CX-9 is only rated to pull 3,500 lbs. – about the same as most current mid-sized cars. 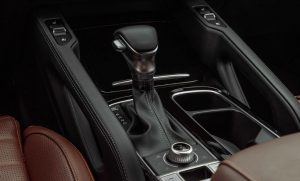 Among its direct cross-shops, only the Subaru Ascent matches the Telluride’s standard tow rating – and beats it by including AWD as standard equipment. However, the plus-sized Soobie comes only with a turbocharged four cylinder engine – which is a small engine for a vehicle this size.

Not the hot ticket for longevity, usually.

Turbocharged engines used to be found almost exclusively in performance cars – as power-enhancers. They’re being used now to maintain power. To get a little four to make as much power as a larger V6 on demand – while getting higher gas mileage.

Except sometimes they don’t.

The V6/FWD Telluride is rated 20 city/26 highway by the EPA – exactly the same mileage as the 2.0-equipped Atlas and 2.5 liter-equipped CX9. 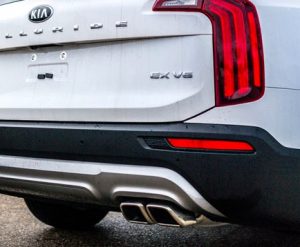 The 2.4 liter-equipped/AWD-standard Ascent does slightly better than the V6/AWD Telluride: 21 city, 27 highway vs. 19 city/24 highway. But it’s a hairsplitting difference. And it may be a less-than-advertised difference.

With a large engine, the advertised mileage is generally close to what-you-actually get mileage. But with a turbocharged engine, your actual mileage is often less-than-advertised  – depending on how much (and how often)  the engine is on boost.

Mileage aside, the Telluride is also quicker as-it-comes than all of its immediate rivals. Zero to 60 happens in 7.1 seconds. The Atlas is quicker – but only if you buy it with its optional engine.

The Kia’s big V6 is designed for regular 87 octane gas, too. 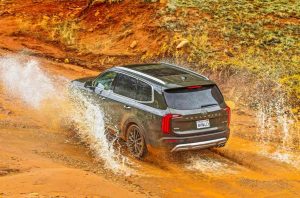 Near-miracles have been performed with little engines, but why perform them? What is the advantage – to the person buying the vehicle – of an engine that’s harder working, has more parts and doesn’t deliver a meaningful mileage advantage?

Or even any advantage at all?

The Kia’s V6 produces a deep, Mustafa Mond bass note in the low and mid-ranges – the proper accompaniment for a big vehicle. The sounds made by fours are as out of place here as a salad at Peter Luger’s. 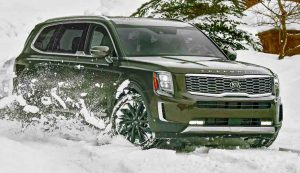 They’re not bad engines – just not appropriate engines for big SUVs. They’re only being used in big SUVs because of fuel-efficiency fatwas hurled by the government that are making it harder and harder to build big vehicles at all.

It’s refreshing to find a right-sized engine in the Telluride.

And it’s a tangible (and well as audible) advantage vs. rivals.

The Telluride’s optional AWD system is another advantage  in that it is disconnectable (maybe not a legitimate word, but it gets the necessary point across). 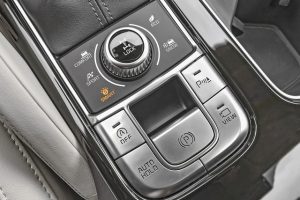 In EcoSmart mode, 100 percent of the V6’s power goes to the front wheels; the rear wheels freewheel and this probably accounts at least partially for this big-engined Kia’s surprisingly good gas mileage relative to its small-engined rivals.

There are also Comfort/Snow, Smart and Sport modes that vary the power split from 80/20 front-to-rear to 65-35 front to rear (in Sport).

You can lock in a 50-50 split for maximum traction in snow or off-road.

The standard eight-speed automatic has two overdrive gears – eighth being a 0.648:1 ratio, which makes 25-plus MPG on average (what I averaged) possible even with a pretty aggressive 3.648:1 final drive ratio. Which gives the big T leverage down low for pulling and hauling. 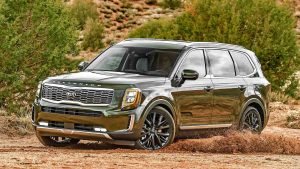 All trims get ASS – automated stop/start. This is becoming unavoidable in new vehicles regardless of type and for the same reason that so many big vehicles come with such small engines: To appease the government and its fuel efficiency (and C02 “emissions”) fatwas.

But there is an Off switch.

All trims come standard with 7.9 inches of ground clearance – but the T doesn’t drive like a jacked-up 4×4 SUV, which is a big part of the appeal of these big crossover SUVs. You feel like you’re driving something substantial – but also quiet and very comfortable. 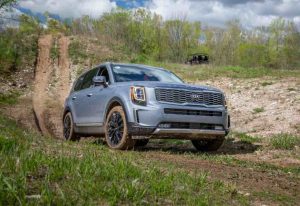 Even on marginal roads, running a lot faster than most people ever will.

There’s an old country road I use to test the rebound damping of vehicles like this. The kind of road that makes axles hop – and fillings drop. If the Big T’s hopped, I couldn’t tell.

No need to slow down, even. Almost nothing was transmitted to the interior that suggested other than paved road. The effect was enhanced by the Kia’s superb seats; they’re not really buckets or benches but something in between. 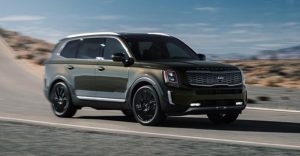 The Big T is also remarkably maneuverable. Its turning circle (38.8 feet) is only slighter wider than a Honda Accord’s (38.1 feet).

You sit up higher, of course – and that helps you to see better, too – but you see more because there’s less metal surrounding you and more glass. In most modern cars, you’re hunkered down – and the metal of the doors rises up while the glass pinches up and back. This makes electronic “safety assists” almost necessary to avoid pulling in front of someone or backing into someone.

The T has them, too – but they’re not necessary.

Because you can see where you’re pointing it – as well as what’s around it. 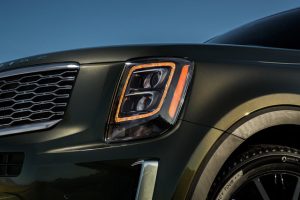 The name is spelled out in widely spaced block lettering on the lip of the hood – just like you-know-who. But it looks as good here as it does there – and while there are similarities there are also differences that spell KIA, such as the inverted L (and L within the L) tail-lights and the eight micro-LED driving lights mounted below the smiley-KIA grille. The Telluride looks almost happy – which is a nice contrast to the angry design ethic that afflicts so many vehicles today.

Inside, there are also similarities  . . .  with Audis. Which isn’t a huge surprise given Kia’s styling chief, Peter Schreyer, is Audi’s former styling chief. He was – and is – known for styling that’s modern but ages well – no easy thing to pull off. He did the Audi TT and it still looks current even though it made its appearance way back in ’98. 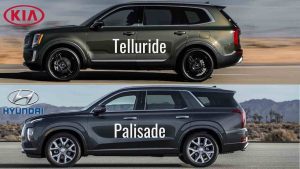 One other similarity is with the Hyundai Palisade – which is the same basic vehicle sold under the Hyundai label – and for a few hundred bucks less to start.

The third row is tighter – 31.4 inches – but that’s equally true about the third rows in all the vehicles in the Telluride’s class. They are big – but not enormous. 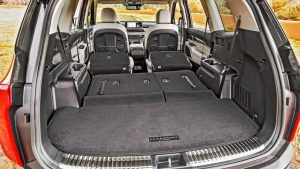 And besides, the Kia’s third row is adult-usable because it has almost as much headroom (38.1 inches) as the driver and front seat passenger enjoy (39.5 inches). This is because of the Kia’s sensibly flat rather than sloped roofline. Even with the optional see-through glass roof, six-footers can sit in the third row without slouching down to make some room for their heads.

In addition to the V6, all Tellurides come standard with AppleCarPlay and Android Auto, five USB ports, an 8-inch LCD touchpad-style display for the audio and apps, adaptive cruise control and 18-inch wheels.

Many of these items aren’t included as standard equipment in rivals – especially the adaptive cruise control, which is often bundled with an extra-cost package or requires buying a higher trim.

Unfortunately, a number of driver “assists” are also standard, including Lane Keep Assist and Automated Emergency Braking. These are really driver-pre-emption/idiot-proofing technologies that are annoyances if you’re not an idiot and don’t like being pre-empted. 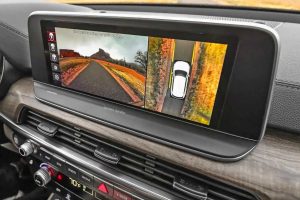 But, they’re much less peremptory than in several other models and you can turn them all off, just like ASS.

EX and LX trims offer a load-leveling suspension system to improve towing dynamics and  a larger 10.3 inch touchscreen – plus a neat voice amplifier for the driver which lets you communicate with people way in the back without shouting.

There’s also a Quiet Mode for the audio system that cuts the feed to the speakers in back, if the people back there prefer not to listen.

It’s nice to see things get bigger – but not smaller.