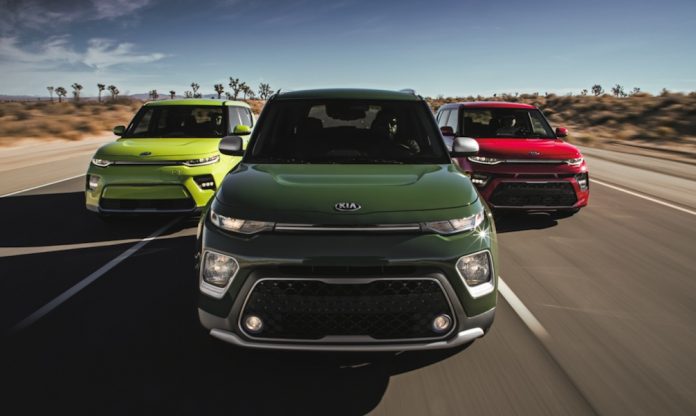 Kia has made the box bigger – but mostly on the inside.

This includes the boom inside the box!

The just-updated Soul is bigger under the hood, too.

But these improvements don’t come at the cost of the original Soul’s affordable fun factor. At just over $17k to start, it’s still one of the least expensive ways to have a good time in a new car you’ll find. 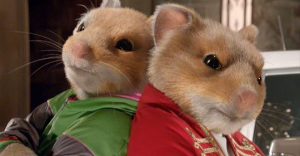 The Soul is one of the original Box Cars – a type of car popular in Japan for many years that began to be seen here about ten years ago.

They are popular in Japan – where space (especially parking space) is scarce and gas is expensive.

They have become popular here because they’re different – for once – and inexpensive (for a change).

Practical, too. This little-on-the-outside Kia has more room inside than some crossover SUVs with a much larger footprint – and without being another crossover SUV. 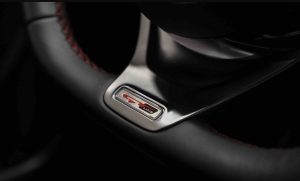 Prices begin at $17,490 for the base LX trim, which comes standard with a 2.0 liter four cylinder engine and a six-speed manual transmission – part of the fun.

Also available – a turbocharged 1.6 liter four cylinder engine paired with a seven-speed dual-clutch automatic transmission. This is the heart and . . . soul … of the top-of-the-line Soul GT-Line Turbo. 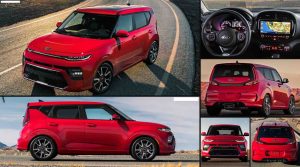 The 2020 Soul is new from the tread up – but it takes a close look to spot the changes.

Front seat legroom has also been increased by about an inch.

Ground clearance, too – which will help on snow days, even though the front-wheel-drive Soul doesn’t offer all-wheel-drive.

And there’s 17 more standard horsepower under the hood – along with better gas mileage than before.

In addition that, the beat is bigger.

The Soul’s optional 10-speaker Harman-Kardon audio rig has twice the wattage (640) with amp and subwoofer plus visual syncopation via LED “sound mood” lighting keyed to whatever you’re jamming to. 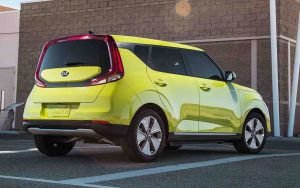 Much more room – without much more size.

Still available with a manual transmission.

Manual transmission only available in the base LX trim – and only with the base 2.0 engine.

It’s a $5k price bump to get the optional turbocharged 1.6 engine – which is only available with the top-of-the-line GT Line trim.

Models with the CVT come standard with automated stop/start.

It took about nine seconds to get to 60. 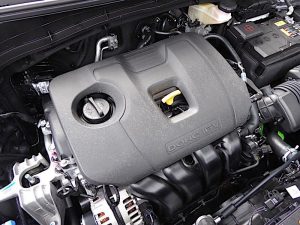 The new Soul comes standard with a larger 2.0 liter engine that makes 147 horsepower and 132 ft.-lbs. of torque while being easier on gas.

That’s not a bad upgrade – especially given the power upgrade.

You can still get a six-speed manual, too – if you prefer to row your own. And you’ll still get 25 city, 31 highway vs. 24 city, 30 highway for last year’s lower-powered 1.6 liter Soul with the manual transmission.

You’ll get to 60 in the low eights, too – a noticeable increase in speed. 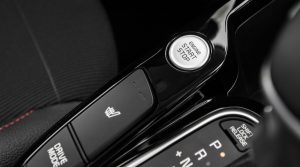 For more power – and speed – and nearly the same gas mileage – there’s the optionally available 1.6 liter engine with a turbo.

It makes 201 horsepower and 195 ft.-lbs. of torque, all of that available at just 1,500 RPM. The turbo delivers a maximum of about 18 psi of boost, according to the in-car gauge.

This engine comes only with Kia’s seven-speed/dual-clutch automatic.

Despite the upticked power, the mileage isn’t downticked.

It still gets 27 city, 32 highway – virtually the same mileage as the 2.0/CVT-equipped Soul and better mileage than the 2.0/six-speed manual-equipped Soul. 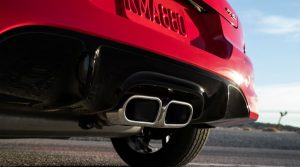 While also getting you to 60 in about 7 seconds.

Unfortunately, you have to pay significantly more to play with this one.

The old Soul was available with basically the same 1.6 liter turbo’d engine/dual-clutch auto combo for $22,900 in the !Exclaim trim, which has been dropped. If you want the more potent engine in the new Soul, you’ll have to pony up for the GT-Line and then opt for the turbo – which brings the MSRP to $27,490.

It’s curious that Kia chose to do this given the turbo’d Soul’s mileage is so good.

Some inside baseball: Federal Corporate Average Fuel Economy (CAFE) fatwas – which specify a “fleet average” MPG number all car companies must meet or be hit with”gas guzzler fines” – exert tremendous pressure on car companies to not sell engines that lower their “fleet average.”

These are – usually – the larger/higher-powered engines, which – usually – use significantly more fuel to make their higher power. This drags down the “fleet average” MPG.

But the car companies also want to be able to advertise that these engines are at least still available – because it sexes up the general run.

So they keep them available – but make them more expensive, to limit the number of people who buy them, so as to limit the damage done to their CAFE “fleet average.”

It’s perverse – but necessary, given the regulatory rigmarole.

In this case, though, it’s not necessary – and arguably, perverse. Because the Soul’s higher-powered 1.6 engine doesn’t drag down Kia’s “fleet average” MPG number. So “fatwa compliance” shouldn’t be a problem – even if every Soul sold came equipped with the turbo engine. 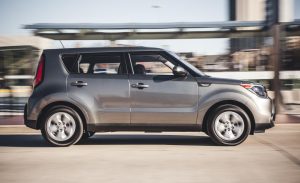 The old Soul was a fun little thing – but in no real hurry – even if you were.

At least, with its standard (no turbo) 1.6 liter engine.

The new Soul with the larger, now-standard 2.0 liter engine gets going with less pressure needed on the pedal to get it going; it pulls harder – and sooner. Which actually makes it feel more relaxed – which fits the car’s chill attitude.

It also works much better with the optional CVT automatic. 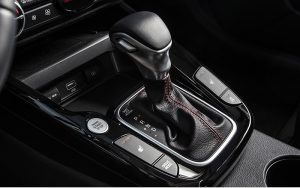 These transmissions get a bad rap for reasons largely not their fault. CVTs came into general use in the early 2000s chiefly for fatwa-compliance reasons. They offered an efficiency advantage worth about 2-3 MPG on average vs. both geared automatics with fixed forward speeds – and manuals with the same.

Each fixed forward gear in a traditional automatic or manual is a compromise – an “about right” ratio for a given road speed/load.

A CVT is an infinite speed transmission that uses an adjustable pulley/belt system to infinitely vary the effective drive ratio continuously for all road speeds/loads. The idea being to keep an engine at exactly the right RPM all the time for maximum efficiency. 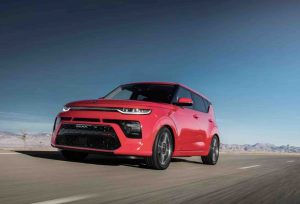 Another CVT plus is the absence of of the “shock” – really more like the snap – that comes with each transition from gear to gear in a conventional automatic – especially during pedal-to-the floorboards acceleration runs.

But if the engine doesn’t make a lot of power, the CVT will also keep the engine running at high RPM – where the struggling engine makes what little power it does – whenever the driver asks for more than gentle forward progress.

Instead of acceleration, there’s a lot of racket-  which calls even more attention to the lack of power.

Which is the fault of the underpowered engine – but it’s the poor CVT that gets the blame. 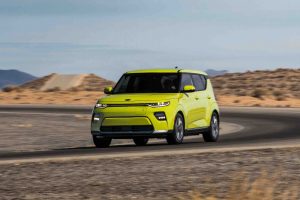 When an engine makes enough power – as the new Soul’s does – it isn’t as necessary to floor it to get acceleration. Instead of lots of noise and apparent stress, you get smooth – and very linear – acceleration, almost like a jet airplane on its take-off roll.

Plus, you can drink your coffee during the “roll” without having to go home for a new shirt.

You’ll get noticeably better mileage and more smoothness with the CVT.

With the turbo 1.6 engine you’ll get more acceleration. More relaxed acceleration, too – because Peak Torque.

No need to hammer this one – though it’s fun to do that, too.

Either way, the new Soul feels more like a bigger car – which is no small thing given how little it is. It’s still only 165.2 inches long overall  – about two feet stubbier than a current mid-sized sedan – which lets it slot into curbside parking spots most other cars have to pass by.

And the turning circle’s tight (34.8 feet) which makes feasible one-turn U turns downtown. 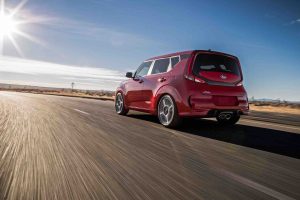 But the upticked power – and an increase in wheelbase (it’s 102.4 inches now vs. 101.1 previously) along with the new underlying chassis and suspension – have greatly improved how it feels outside the city, on the open road.

And in the country – where roads are often irregular and pothole-pocked. The Soul handles bad roads better.

With the extra inch of ground clearance, it should handle bad weather better, too. 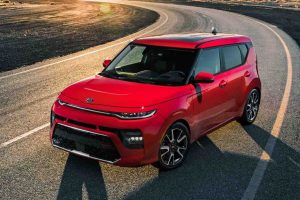 Kia didn’t make the mistake of changing what people clearly liked about the old Soul.

The styling continues to be defined by the trademark cantilevered-looking roofline, swoosh side glass and abruptly vertical rear – which looks like it was sliced off before the rest of the car made it through.

It’s an iconic look – much like that of the original VW Beetle – and if you’re smart, you don’t mess with it. 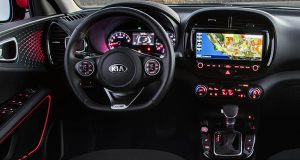 The new Soul’s headlights are slittier and the grille is larger and the hockey stick taillights that bracket the liftgate glass are slimmer. But none of these changes change the Soul’s . . . soul.

It’s still instantly recognizable as a Soul – because nothing else looks like this.

The new Soul is about two inches longer overall than the old Soul – something you can’t tell by eye – but  total cargo capacity has been increased by an eye-opening 25 percent to 62.1 cubic feet.

This is about four times the capacity of a typical mid-sized sedan’s trunk.  It’s also space made more versatile by a clever stackable shelving system.

The Soul also has abundant room for passengers – including those riding in back, which most cars this size do not. 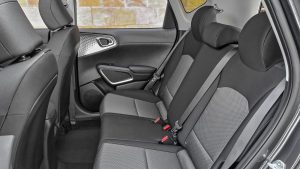 It has almost an inch more legroom, in fact, than a Toyota Camry – 38.8 inches vs. 38 inches – despite being more than two feet shorter than a Camry.

But most of all, the new Soul has the same distinctively jaunty look – and attitude. It’s a car that isn’t like other cars, regardless of price.

Which is a big part of its charm.

That hasn’t changed at all. 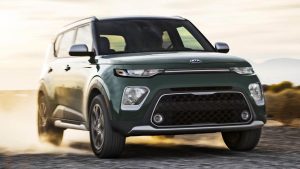 In addition to the new GT Line, Kia has added an X-Line trim to the roster. It features “chunky” – Kia’s term for them – fender flares and body cladding, plus roof racks and an 18-inch wheel/tire package.

The X-Line (and GT-Line with the turbo engine) come standard with a much larger 10.25 inch LCD split-view touchscreen in the center stack; you can also opt for a Heads-Up Display (HUD). 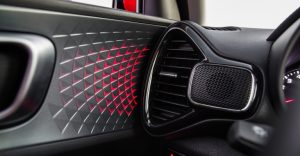 But the feature that’s probably of most interest to Soul shoppers is the available Harman-Kardon 10-speaker audio system – the boom within the box. Tweeters built into the dashboard air vents point directly at you – and speakers are all around you.

You’ll be bathed in light as well as sound.

Kia was among the first to come up with the idea of mood lighting that jammed with the jams – and the new Soul does everything but drop a disco ball from the roof. There are six selectable mood lighting programs ranging from Hey! Yo! to Party Time to Midnight City, Cafe and several more (six total) in between. 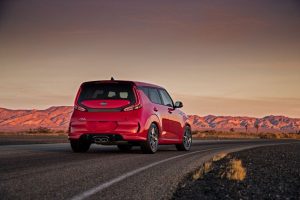 This ambiance is enhanced by interior trim designed to look like the waffled/eggcrate sound-deadening material found in sound studios.

It’s all a lot fun – and for not much money.