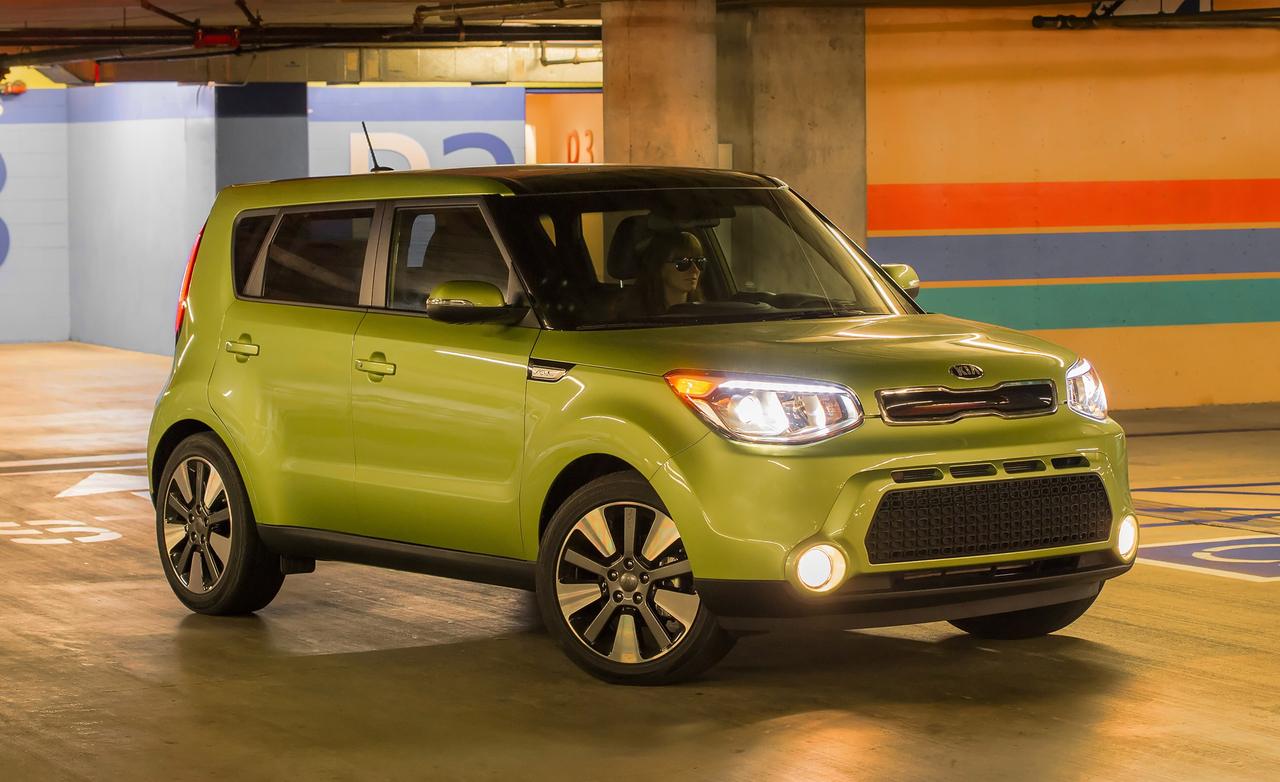 Kia just won’t let up. Every few months, it seems, they either bring out a new one – or a better version of an already good one. 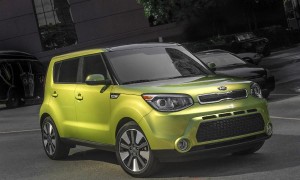 This latest Soul, for instance.

Barely three years after this model made its debut – and quickly became a major hit for Kia – the midnight-oil-burning Koreans have done a major update well before it became necessary to update it. Probably, they could have left the thing alone for another year at least (and maybe two) without much worry about people getting tired of it.

Meanwhile, Toyota’s Scion brand – which was the first to bring a funky Japanese “box” car to the U.S. – has been asleep at the wheel since 2008. That was the last time the xB – the car that probably inspired the Soul – was updated. Put another way, Kia has introduced an all-new model – and significantly updated that model – during the same time interval that Scion has done virtually nothing (beyond minor styling tweaks and the addition this year of an optional LCD screen for the audio system) to the xB.

Toyota better get hip, quick. Same goes for the other old lions.

These Koreans are serious. 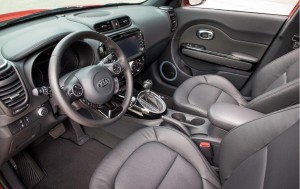 Toyota was first – the xB. And Nissan was second – the Cube. But Kia has been the most successful – because the Soul combines funky cuteness with everyday usability the Cube lacks – and a price tag neither it nor the Scion can match. 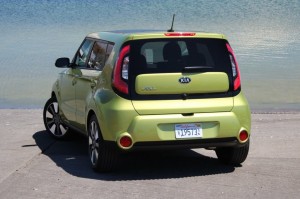 The 2014 Soul receives its first major update since Kia introduced this model in 2010. The changes are subtle – but significant – including a longer wheelbase (and slightly larger overall size) as well as a much luxed-up interior, which can now be equipped with a heated steering wheel, 8-inch LCD split-screen monitor for the audio system and GPS, massive panorama sunroof and a beverage chiller glovebox. 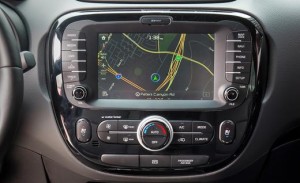 A young person’s car – without the older person price.

Choice of engines – and transmissions.

Much improved ride (the main Great Leap Forward relative to the original model). 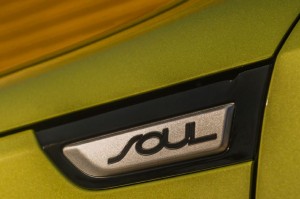 Base engine is marginal, acceleration-wise, for other than urban/suburban driving.

Optional engine is now automatic only.

One of the things that gave Kia a big edge over its main rivals – the Scion xB and the Nissan Cube – was that it alone offered drivetrain options. That continues to be the case. 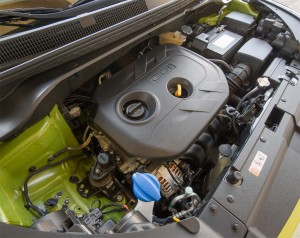 The two available Soul engines remain the same size as before – 1.6 and 2.0 liters – but both have been tweaked some for the new model year. 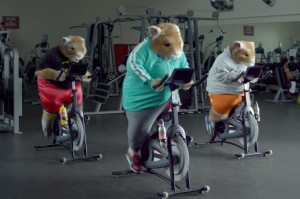 Result? What you’d expect. The 1.6 liter-equipped Soul is a slug. Zero to 60 in 10 seconds, base case scenario. But, this still adequate for city-suburban knocking around – and it’s on-par with the Nissan Cube, which is marginally viable on the highway for reasons other than its paucity of horsepower (more on this below).

The 1.6 liter engine comes standard with a six-speed manual, which helps make it feel spunkier than it actually is (more on that in a moment, too). You can order a six-speed automatic, but it bumps the Soul’s price up $17,495 (right on par with the base Scion xB, which comes with a much stronger standard engine and a 0-60 time in the mid-eights). The six-speed auto is, however, much more up-top-date than the Scion’s optional four-speed automatic. 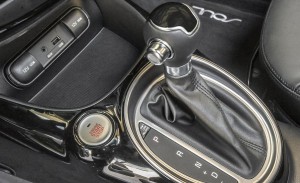 Need to kick it up a bit? The Soul offers a 2.0 liter, 164 hp engine – same hp number as last year, but published torque output is now higher: 151 ft.-lbs. vs. 148 ft.-lbs. Whether actual or just on-paper, the difference is so slight that it’s not something you’d feel in the seat of your pants (or notice, using a stopwatch) either way.

Equipped with this engine – which now comes only with the six-speed automatic – the Soul gets to 60 in about 8.7 seconds. The Scion xB is still just slightly quicker, but it feels (and sounds) a bit cruder, being a much older design (the current xB dates back to late 2007 and the current model – no word if there’ll be a new model – uses out-of-date five-speed and four-speed transmissions).

Gas mileage is not a Soul strength. Probably due to its less-than-areodynamically agreeable shape and its fairly high curb weight. The base-engined model manages 24 city, 30 highway – which is ok, but behind the curve for a small car these days. A Soul with the larger 2 liter engine rates 23 city, 31 highway. 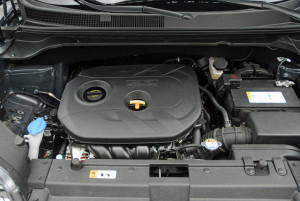 Still, these not-so-great numbers are good relative to the competition. The Scion xB, for instance, tops out at 22 city, 28 highway. And the Nissan Cube – which, recall, is a dog (zero to 60 in 10 seconds) – is only marginally easier on gas (in city driving. where it creaks up to 25 MPG) than the much more powerful and a whole lot quicker Soul 2.0.

On the highway, the Nissan’s 30 MPG rating is 1 MPG less than the Kia’s. 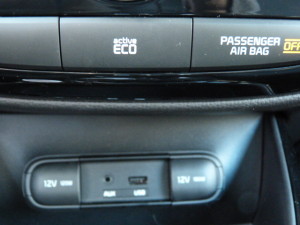 The Soul can be ordered with an Eco package that includes an automatic engine stop/start function and low rolling resistance tires – which might give you a couple more MPGs, depending on your driving patterns. One think I dig is that the default setting is off. In other words, the Soul’s engine doesn’t stop unless you deliberately push the Eco button. In several other makes/models of car that have similar systems, the auto-stop thing is default on – which means unless you remember to turn it off (every time you turn the car one) the engine will automatically turn off. 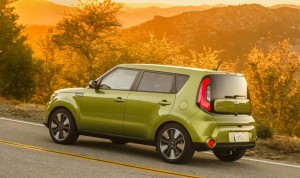 Kia has worked hard to address the chief complaint people had about the original – that it had a fairly noisy (and fairly bumpy) ride. Changes to the ’14’s chassis include a bit more wheelbase and a smidgen more width (101.2 inches and 70.9 inches, respectively, vs. 100.4 inches and 70.3 inches before) plus a lot of tweaking and tuning. Sixteen inch wheels are now standard, for instance. 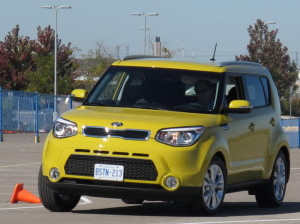 Also new is a three-mode, driver-selectable electric power steering system. Tap a button for Normal, Comfort (a bit more assist and lighter feel) or Sport (firmed up for higher-speed work).

The end product is a car that feels more at home on the highway – and handles pothole-pocked city streets better, too. It is more sure-footed – and a lot more quiet than-  it was before. In fact, it seemed to me to be about as quiet as any “normal” crossover wagon or compact sedan. 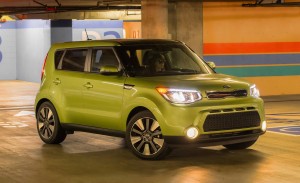 Having driven all the “box” cars currently available, I will state for the record that the Soul is the clear pick of the litter. It is vastly superior to the Nissan Cube – which is underpowered for openers and also subject to being violently tossed around by crosswinds on the highway due to its very tall profile (65 inches, two inches taller than the Soul) skinny tires (still fifteen inchers) and short wheelbase (just 99.6 inches). The Scion is plenty powerful, but also plenty noisy – especially when its 2.4 liter engine is paired with the optional four-speed automatic. The xB’s ride is also overly-bouncy (see my review of the xB here). 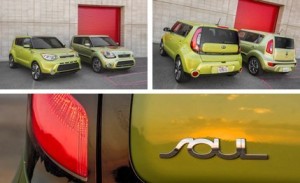 Kia – wisely – did not make the mistake (my opinion) that Scion made back in ’08 when it porked out the xB (the second gen. is a much larger, much heavier vehicle than the original ’04 model) and dramatically changed its styling (the ’08 to current xB looks only vaguely like the original). The new (in ’08) xB lost something – and has never recovered.

The new Soul is everything the old Soul was – just nicer.

Same immediately recognizable cantilevered clamshell roofline and jaunty swagger. Same face – just a bit cleaner (one-piece, larger headlight assemblies) and a bit bolder (wider/taller lower grille, with fog light recesses molded into the grille surround rather than off to either side) and taller tail-light stacks out back. But it’s still obviously a Soul – and so, has not lost its soul. 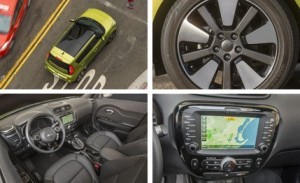 It also has a much nicer interior, which is the most immediately obvious difference. Not that the original’s was ugly or sub-par. It was what you’d expect in a car with a $15k-ish base price. The ’14’s interior layout is more than you’d expect. Materials are richer, there’s less hard plastic – and more high-end trim (including piano black inserts on some models). The center stack is wider and more visually integrated with the rest of the dash – and when fitted with the optional 8 inch LCD split-screen monitor, the car looks and feels like something above its price point.

You can order “mood lighting” that pulses in time with your tunes – and there are twin 12V power points up front, along with a USB port. Heaters for the back seats are available, too (part of the Whole Shabang package). 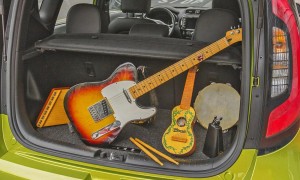 All this is good – really good, can’t argue with it good. In fact, the only arguable negative about the ’14 Soul relative to the original is the somewhat mysterious reduction in front row legroom – which now stands at 40.9 inches vs. 42.1 in the ’13. I say “mysterious” because – after all – the ’14 Soul has grown a bit, so there ought to be slightly more interior space, not less. Even more weirdly, second row legroom is virtually the same (39.1 inches now vs. 39 in the ’13). I’d have expected the lost two inches up front to have been reappeared in the back. But, no.

So, where did they go?

Behind the second row. 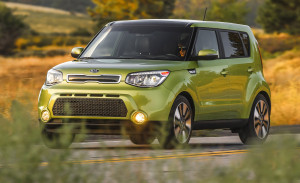 The ’14 Soul has a larger (14.2 gallon) gas tank than the ’13 Soul (12.7) which will make it seem a bit less thirsty by increasing its range. The formerly available SOUL SOUL SOUL seat (and door and everywhere else) interior callouts have been retired – but you can get a Mini-style off-center racing stripe for the exterior now.

And there’s reportedly an electric version of the Soul on deck for sometime later on in 2014, or maybe as an early 2015. 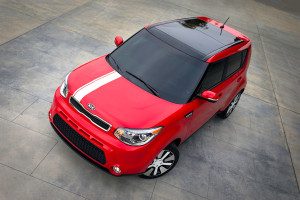 One thing you can’t get yet but which I hope Kia is considering is a performance engine option for the Soul. The just-redesigned Forte (there’s another new Kia) Koupe comes with a turbocharged version of the 1.6 liter engine – the same basic engine that’s the Soul’s base engine. Turbo-goosed, the 1.6 engine makes 201 hp – and though hard numbers were not year available when I wrote this review in late November of 2013, the 1.6 turbo engine’s fuel economy ought to be about better than either of the Soul’s current non-turbo engines. Consider: The larger – and much more potent – 2.0 liter turbo (274 hp) used in the Optima sedan earned a 22 city, 34 highway EPA rating. The 1.6 turbo – in the lighter Soul – should be able to at least match that – and probably could beat that.

The lunch eating will continue, I expect.