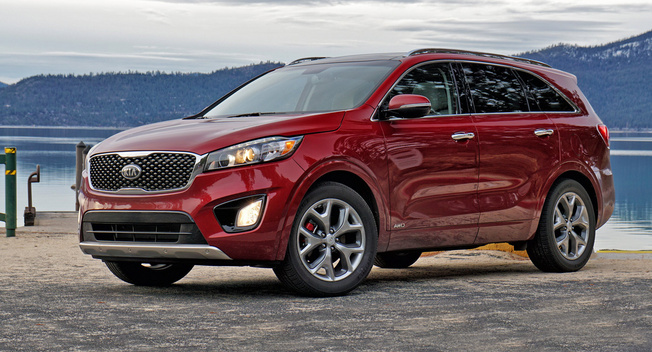 Remember Harvey Dent – aka, Two Face – from the Batman comics? 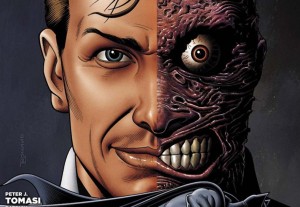 I had such thoughts while test driving the Kia Sorento minivan.

Well, ok, it’s technically a crossover SUV. But except for the absence of sliding doors, this is a minivan.

And a sporty minivan is kind of like Harvey Dent/Two Face. 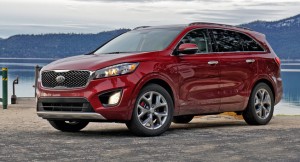 It’s also the only vehicle in this class that currently offers three-rows and all-wheel-drive with either of two four cylinder engines (one turbocharged, one not) and a V6.

The Toyota Highlander offers just one four and one six – and the four is is not offered with AWD. To get it, you must buy the optional V6.

Another possible cross-shop, the  larger (three-row) Sante Fe (not the  Sport) comes only  with a V6. 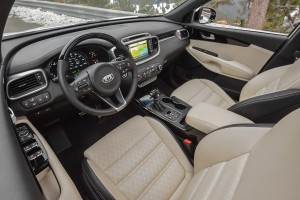 The Ford Edge is another contender.

Like the Kia, it offers offer a variety of engine/drivetrain options – including a very strong four cylinder/AWD combo – in a similarly sized package.

However, the Edge – recently updated – is still be a two-row-only deal.

And the Hyundai has the edge when to comes to cost vs. either the Ford or the Toyota.

The Kia does get pricey on the other end of the scale, however: 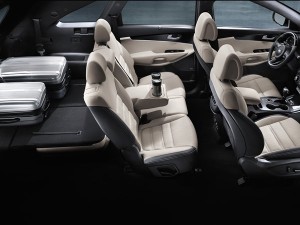 The ’16 Sorento is about 3 inches longer overall vs. the previous model and rides on an almost-three-inches longer wheelbase. The punched out dimensions allow for a roomier third row and make the Kia a viable Highlander cross shop – as well as a viable alternative to a traditional minivan.

Also new is a 2.0 liter turbo four option, available with all-wheel-drive or without. This gives buyers a mid-range choice between the value-priced base (non-turbo) four and the top-of-the-line V6.

Formerly, the Sorento only offered the base (non-turbo and low-powered) four – or the powerful (but expensive and thirsty) V6. 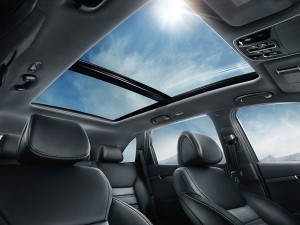 Big – but not too big. Ideal for a family that needs a third row occasionally but not the full-size footprint all the time.

Wide range of drivetrain options. Base engine is offered with AWD (making this the most affordable vehicle so equipped in its class).

Easy to use (and fold flat) third row. One tug is all it takes (headrests cleverly auto-fold out of the way as the seats drop down).

If you want the turbo four, you’re restricted to the five-passenger seating layout.

If you want the big V6, you’re restricted to the seven-passenger seating layout.

Turbo four is almost as thirsty as the V6.

Base touchscreen is on the small side (4.3 inches).

Many apps/infotainment features can’t be adjusted while the vehicle is moving. 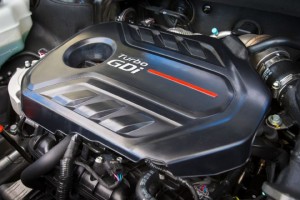 The Sorento offers you those choices, too – plus one more.

The standard engine (in five-row versions) is a 2.4 liter four, no turbo, generating 185 hp – exactly the same output, it turns out, as the current Toyota Highlander’s standard 2.7 liter four (also 185 hp). The big difference, Kia-wise, is that you can pair this engine with all-wheel-drive. The AWD is extra-cost, but it still costs a great deal less than it does over at the Toyota store. If you want an AWD Highlander, you must buy the V6, too –  which pushes the base price to $30,970 before you buy the still-optional AWD. 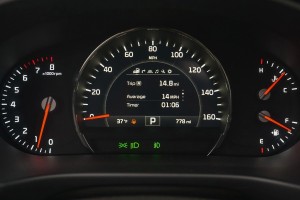 These are good numbers for the class. To compare, the FWD-only Highlander with the 2.7 liter four’s mileage is 20 city, 25 highway.

That is to say, the FWD Highlander’s mileage is worse than the AWD-equipped Sorento’s.

Next up is a 2.0 liter four –  smaller in displacement but much stronger in output, thanks to the turbo force-feeding it air. It’s the same basic engine that’s used in other Kias (and Hyundais, including the popular Sonata sedan). Power is pegged at 240 – with 260 ft. lbs. of torque available by 2,000 RPM, giving it low-end power the base (non-turbo) four lacks. This engine is also available with – or without – all-wheel-drive and is also paired with a six-speed automatic transmission.

The performance it delivers is much better, as you’d expect. 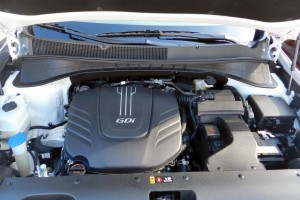 While the 2.4 liter equipped  Sorento needs about 9.5 seconds to get to 60, the turbo’d Sorento gets there in in about eight flat. It also gets about the same gas mileage as the 2.4 liter engine, so there’s no at-the-pump penalty for choosing this engine. It gives you stouter towing capability as well: 3,500 pounds (an uptick of 1,500 pounds over the base Sorento).

However, the 2.0 engine is only available in five-passenger Sorentos.

There are driver-adjustable Eco and Sport settings for the six-speed automatic as well as a center diff lock (AWD versions) and a neat “Auto Hold” function that Hyundai-Kai was among the first to install in its vehicles. Push the button and you can take your foot off the brake while stopped waiting for a red light and the car will stay put even though you’re still in Drive. 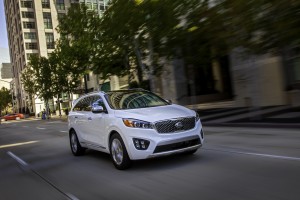 The Sorento’s base engine – the “Harvey Dent” engine – is sufficient for family-hauling duty.

Anything that can get you to 60 two full seconds quicker than a Prius makes the cut. The 2.4 liter engine does. And it’s a bargain. Go back and re-read those MSRPs again. For less than $25k, you can drive a new Sorento. Now go price an AWD minivan.

If you can find one.

The big debate, Sorento-wise, is between the new turbo 2.0 engine and the 3.3 V6. Both are more than sufficient. But each has a different personality. The V6, which is the bigger engine, makes less torque – and farther up the RPM dial. 252 ft.-lbs. vs. 260 for the 2.0. Though the smaller four makes less hp, it’s the punchier – the sportier – of the two powerplants. Which is probably why Kia decided to offer it only with the two-row/five-passenger version of the Sorento.

The V6 is a less revvy engine, suited to family hauling… as opposed to hauling. 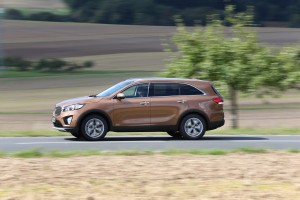 Which, by the way, the Sorento is fully capable of doing.

I don’t mean just the straight-line stuff, either. I made (cue Iron Sheik) several sport sedans hombel coming up the two mile asphalt anaconda that is Bent Mountain Road here in The Woods of rural SW Virginia. Either those dudes were on ‘ludes – or the Kia was more capable than they were skilled, despite their putatively superior equipment.

That’s the beauty of the modern car. Or crossover.

Anything that’s new makes feasible driving antics that would have been a test of skill even in a dedicated high-performance sports car back in the ’70s or ’80s.

Trust me, I was there.

More real-world relevant is that the Kia’s not-too-big size (especially relative to the humungous – and heavy – Highlander and also traditional minivans) and its adroitly tuned suspension, which is both compliant and grippy. This is a surprisingly fun-to-push family truckster. The Ford Edge is also adept at shenanigans but it’s not as quick (even with its Ecoboosted twin-turbo V6) and it only has room for five. 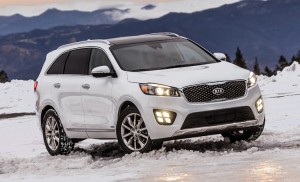 Compared with the Highlander, the Sorento feels – is – more nimble. Its turning circle is nearly two feet shorter (36.3 feet vs. 38.7 feet for the Toyota) and because it’s shorter overall, there’s less backing up and forward (repeat) to get it into – and out of – parking spaces.

The Drive Mode Select (standard in all trims, with all engines) has Sport and Eco and Normal settings but it’s hard to tell much difference between them. In Sport, the transmission kicks down to fifth (and out of sixth/overdrive). In Eco, throttle response is slightly dulled, but only just slightly.

It’s not a problem, though, because the Sorento drives well in whatever mode you select.

There is no “snow” mode but AWD Sorentos do have a driver-selectable center differential lock that is very helpful in snow. Torque vectoring – power can be kicked to individual wheels as necessary (and will be done automatically) is part of the deal, too. 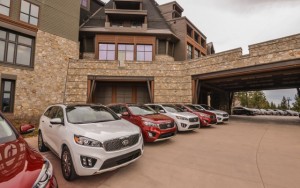 Kia went larger, but the ’16 Sorento still occupies that sweet spot between small fry like the Honda CR-V, the Sante Fe Sport and full-size lunkers like the Highlander and traditional minivans.

The stretch job (which includes the wheelbase – now 109.4 inches vs. 106.3 before) noticeably opens up the interior. There’s 44.1 inches of legroom in the first row now (vs. 41.3 before) and the second row boasts almost as much legroom (39.4 inches) as the previous Sorento had up front. These stats stack up impressively vis-a-vis the Highlander. Which, remember, is a much larger-on-the-outside vehicle. Yet it has virtually the same legroom up front (44.2 inches) and slightly less legroom in the second row (38.4 inches). 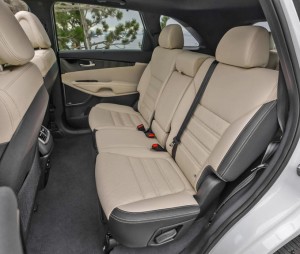 The Ford Edge, as it turns out, bests them both – second-row-wise, with a class-best 40.6 inches.

But, there’s no third row – standard or available.

The Kia’s third row is perhaps the easiest folding and stowing third row around. Because the headrests drop out of the way automatically as the seats fold forward, which they do at the tug of a strap on the back of each seatback.

While there’s not a lot of footwell space for third row occupants, they are definitely kid-usable and adult viable for short trips. 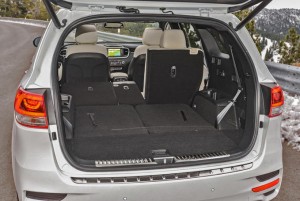 Total cargo capacity is 73.5 cubic feet – a bit less than the Highlander’s 83.2 cubic feet and the full-size (three row) Sante Fe’s 80 cubic feet, but more than smaller-overall (and two-two-row-only) crossovers like the Honda CR-V (70.9).

For the longest time, Japanese and Korean cars have had inferior seat heaters that merely warmed – and (often) not for long (they’d cycle off the moment they did get warm). No such worries anymore. There are twin 12V power points and a USB plug-in where you can see them (and access them) ahead of the shifter on the front console.

Plus a USB charger port in the (good-sized) center console storage cubby. 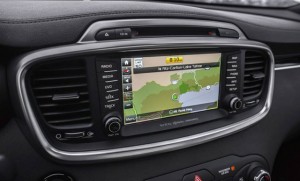 An interesting option is Kia’s “eService” system, which includes electronic teenager countermeasures such as geo-fencing and curfew alert. Some of the Kia’s systems can’t be accessed or adjusted while the Sorento’s in motion, though.

Thank the Safety Cult for this pre-emptive idiot-proofing.

You can spec your Sorento out with manual side privacy shades, a full-length panorama sunroof and a handsome upgrade LCD display (8 inches) that is among the best-looking and easiest to use such system currently available.

So decked out, it’s a really nice bus. 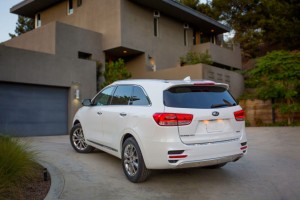 Kia – like parent company Hyundai – started out as the “value alternative” to the mainstream stuff. You got a (usually) decent vehicle at a lower price.

They’re both more than just value alternatives now – and better than decent – but still sell for a lot less than otherwise equivalent rivals.

The Kias, especially, have real personality, too … just like Harvey Dent.