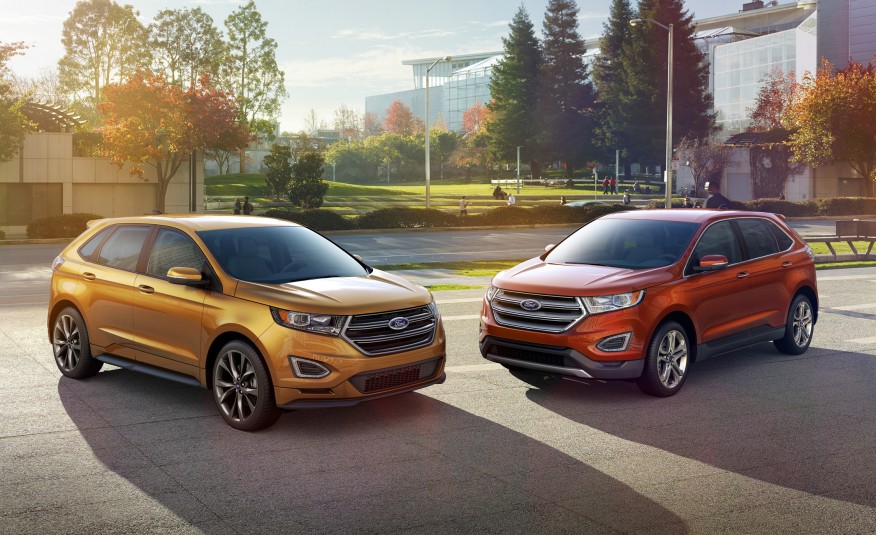 How to make (sigh) a crossover SUV interesting? 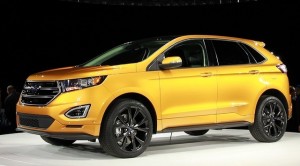 The Ford Edge can be ordered with lots of it.

She’s a runner and a gunner.

And not a bad deal, either. 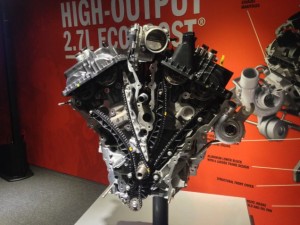 There are other iterations of the Edge, too.

None of them packing less than 240 hp.

Which is more than any direct rival’s top-of-the-line engine. 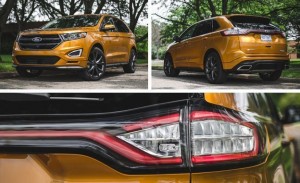 The Edge is a mid-sized, two-row crossover SUV designed it to appeal to people who don’t need three rows (that’s where Explorer comes in) but who want lots of room in two rows – as well as something going on under the hood.

All trims – including the base SE with the four-cylinder engine-  are available with FWD (standard) or AWD (optional). 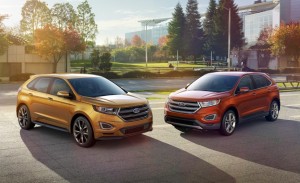 Either of the above is available with the turbo four or the non-turbo V6. Mix and match as you prefer.

The Nissan is larger (longer) but – interestingly – has less space in both of its two rows and also comes only with one V6 (not turbo’d, not nearly as potent) and a CVT automatic, regardless of trim.

If you’re shopping the Sport – with its 315 hp twin-turbo V6 – you might want to compare it with the Lexus RX350 F Sport. The two are very similar, except MSRP-wise.

The Ford – not being a Lexus – is considerably less expensive. 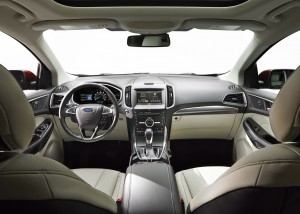 After a complete, wheels-up makeover for the 2015 model year, the Edge rolls into 2016 without major changes – with two exceptions.

Sport trims now come standard with an adaptive steering system that alters feel and effort to suit the situation. The system is available optionally on Titanium trims as well.

The other big news is an updated (Sync 3) version of Ford’s somewhat (so far) fussy LCD touchscreen infotainment system.

More of everything (especially hp) than immediate rivals such as the Nissan Murano.

Base four can be ordered with AWD; no up-selling you to the V6 to get it.

More legroom in second row than Murano has in first row.

Edge is pricey relative to Murano.

Ford hasn’t got the cachet that Lexus does.

Both of the Edge’s turbo’d engines (including the base 2.0 engine) need premium fuel to deliver best-case horsepower/mileage. 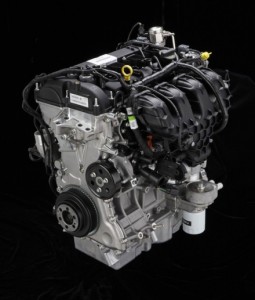 A couple of interesting things about the Edge.

First, the new standard engine – a 245 hp turbocharged four paired with either FWD or AWD.

The previous Edge also offered a turbo four – but not with AWD. If you wanted AWD, you had to move up to either of the two available V6s.

On paper, the current 2.0 turbo four seems to be about the same, power-wise, as the previous generation Edge’s 2.0 four. They’re the same size, both turbo’d; the current iteration producing just 5 more hp on paper than the old 2.0 engine did.

The current 2.0 four – though superficially similar  to the old 2.0 four – is a heavily revised engine, effectively an all-new engine. For instance, it features a twin-scroll turbo and an exhaust manifold that are cast integrally as part of the cylinder head. These design changes result in almost-immediate boost and so very little turbo lag.

The new 2.0 engine also features revised camshaft timing, higher compression (9.7:1 now vs. 9.3:1 before), direct injection – and the block is a lighter casting which, along with other weight-saving measures, made it possible for Ford to offer the four and AWD together for the first time. 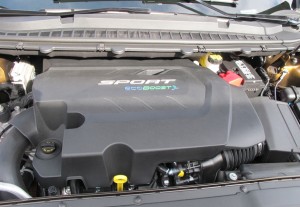 The optional V6s – either the turbo’d new one or the not-turbo’d carryover one – can be purchased if you’d like more power, but not because you have to buy them in order to get AWD.

In any event, the Murano does not give you much variety under the hood.

For the traditionalist – the buyer who is maybe a little leery of turbo’d engines but wants more power – there is the non-turbo 3.5 liter V6, also offered with (and without  AWD). It makes 285 hp (25 more hp than the Nissan’s V6) and is paired with a six-speed automatic (as is the turbo four). 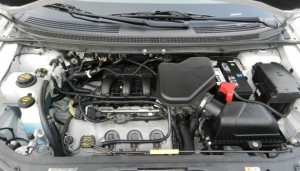 The top Edge engine is the “Ecoboost” 2.7 liter twin-turbo V6.

Ford fans will recognize this powerhouse powerplant; it made its debut in the new, aluminum-bodied F-150 pick-up truck. In the Edge, it produces a bit less power – but 315 is still a step up from the 305 hp produced by the previous Edge’s optional 3.7 liter V6 and absolutely blows the Murano’s 260 hp V6 into the weeds. The 2.7 engine features a graphite-impregnated iron-alloy block for high strength and light weight. Plus a pair of twin-scroll turbos. It is one of the strongest engines currently available on a power-per-liter basis and otherwise.

The FWD Sport with this engine (which, again, is unique to Sport trims) gets to 60 in the high sixxes – quicker than both the Murano and the Lexus RX350 F Sport.

What did you expect? But, re-read the Murano’s numbers. They’re not much better, despite the Nissan’s being much less powerful.

The Edge’s optional AWD system is capable of routing 100 percent of engine power from front to rear, as needed, to maintain traction. 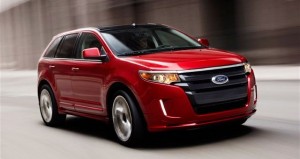 Ford flew me – and other car jockeys – out to Arizona to test drive the Edge. We did deserts, we did suburbia – and in between.

The immediately obvious thing about the Edge is that any of the available powertrains will more than do. None are to be avoided.

It comes down to whether you’re content with strong, stronger – or gotta have strongest.

The Ecoboosted four is probably the one you want for suburbia because it has good low-end torque (270 ft.-lbs. – more than the next-up 3.5 liter V6) and very strong mid-range power that pulls the Edge smartly from light to light – and gives you not bad gas mileage  for such a big galoot (about 5 MPG better, as it turns out, than the previous-generation Edge with the 3.5 V6 and AWD).

Probably, this is the version I’d buy.

The carryover V6, on the other hand, has more on top (horsepower-wise), pulls harder at highway speeds – and perhaps most important, does not come with any angst about possible down-the-road turbocharger trouble. 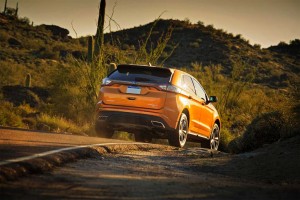 On this subject: I spoke at length with a group of Ford powertrain engineers who made me feel good about the turbo’d engine’s long-haul prospects. They tortured prototypes in ways that would make anyone feel sorry for the poor things, even if they are machines and cannot feel pain. But – again – the truth will out as the years pass in real-world driving. If you’re risk-averse, the non-turbo 3.5 V6 may be the one for you. It’s been around a long time, has a track record – a good one – and its only real weakness is that it’s a bit on the thirsty side.

But then, everything in this class – that’s comparably powerful – is that, too.

The Sport with the twin-turbo 2.7 V6 is its own animal – a different species, really. If Ford had not dialed down the power (left it at F-150 levels in the much lighter Edge)  we’d have a blue oval version of the Mercedes AMG45 GLA (which is a high-end and slightly larger version of the Subaru WRX STi, no matter what Benz likes to call it). 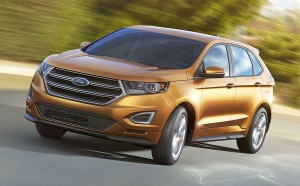 It gets different suspension tuning, including monotube shocks with larger diameter pistons unique to this trim, along with stiffer roll bars, coil springs and adaptive steering that changes effort based on driving conditions.

Edge Sports come standard with a 20 inch wheel/tire package, too.

One thing it has that I personally wish it didn’t come with is Active Noise Cancellation technology. This generates sound waves that cancel out (as far as your ears are concerned) the sounds made by the engine.

But some of us want to hear the engine – especially when it’s a sweet sounding twin-turbo engine. 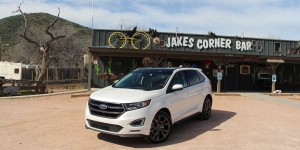 At a glance, it’s not easy to spot the changes – but they are significant. The Edge is about four inches longer than the previous-generation Edge (188.1 vs. 184.2) and 1.6 inches taller. The bigger shell allows upticked dimensions inside the shell, where there’s a bit more headroom in both rows and a bit more legroom in the second row – as well as significantly more room for cargo behind the second: 39.2 cubes now vs. 32.2 previously.

The Nissan Murano still has slightly more cargo room – 39.6 cubes behind its second row. But it has nearly two inches less legroom for second-row passengers (38.7 vs. 40.6 for the Ford) and 2.1 inches less legroom up front (40.5 vs. 42.6). Headroom in both rows is also a bit tighter in the Nissan – and it’s a tighter squeeze side-by-side, especially in the second row, where the Ford has 57.5 inches of hip room vs. 55.2 for the Nissan. 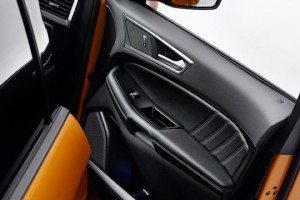 Cosmetic details: The Edge is less blocky than previously; the new grille, for instance, has outward tapering sideways”Vs” now instead of the bar-grille used before. The door panels are scalloped inward to provide an extra margin of clearance – and (in keeping with the high-tech theme) 20th century manual pull-up-and-down interior door locks have been replaced by entirely electronic ones.

There is a front seat passenger knee air bag (driver’s side knee air bags are not new; this is) as well as air bags built into the rear seat belts. The Edge’s rear liftgate can be opened “hands-free” by swiping your foot underneath the bumper. Redesigned seat heaters and coolers (new for Edge) are available, as are MyKey concierge/teenager controls you can use to limit the vehicle’s top speed and other functions. 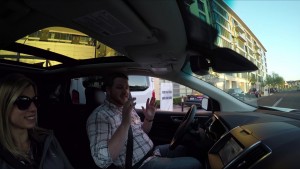 This Ford that can park itself perpendicularly (into and out of spots in a row, as in a shopping mall) as well as parallel park (curbside). There is a camera built into the grille (with its own washer jet, so its view is never impaired by road grime) and your only job – if you so desire – is to give it a little gas. The car will adjust and steer itself into the spot.

Now, the fact is a competent human driver can do it faster as well as more gracefully. But the Art of the Parallel Park is rapidly becoming rare – and irrelevant. People aren’t taught – and the skill is no longer expected. This is – alas – the future. Cars will drive themselves. 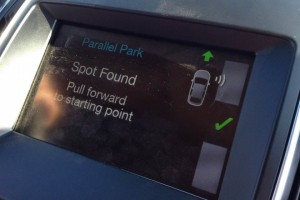 The Edge also has a semi-automatic steering system that applies corrective inputs when the driver fails – on his own – to keep the car in its lane. People (a lot of them) seem to want such stuff and I concede it is technologically impressive stuff… but it makes my teeth hurt.

Sometimes, technology can be a bit too clever.

People who cross shop two-row mid-size crossovers like the Murano will be impressed by the Ford’s objective superiority under the hood, its interior space and its not unreasonable price. And people who’ve been considering the Lexus RX350 F Sport may want to give this Ford a look, too.