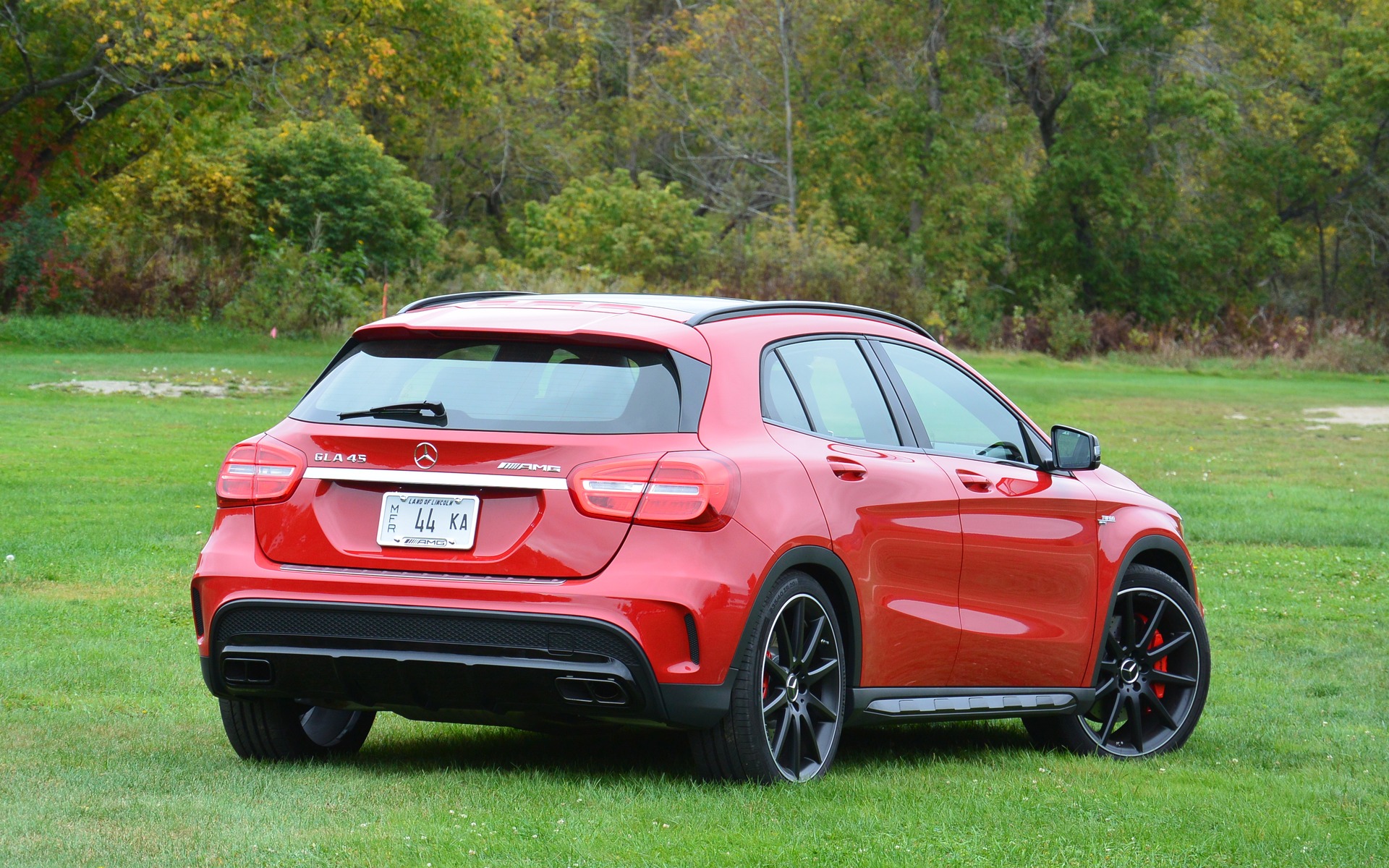 Wastegates popping, all four tires skittering … zero to 60 in the mid-high fours. 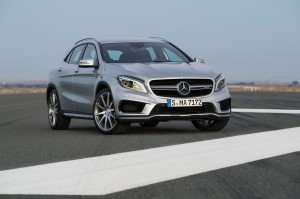 It’s an STi for grown-ups. 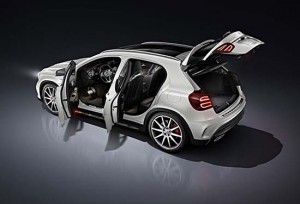 The GLA is Mercedes’ new compact five-door hatchback. It is based on the also-new CLA sedan and normally comes with a perfectly peppy 208 hp 2.0 liter four and with – or without – all-wheel-drive.

Then there’s the AMG version.

It is Mr. Hyde to the regular GLA’s Dr. Jekyll. Chopped down two inches. Fitted with serious brakes. The 2.0 engine force-fed huge volumes of air (and a complementary dose of premium unleaded) to generate a spectacular 355 hp, feeding through an AMG-modified seven-speed automatic and (mandatory) all-wheel-drive.

Though Mercedes doesn’t mention Subaru’s high-performing (but less prestigious) STi as either inspiration or competition, there’s currently nothing else quite like the GLA 45 AMG that’s so similar in layout. 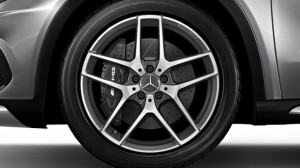 But what you’ll drive home in isn’t an expensive (though very speedy) Impreza.

Both the GLA 250 and the AMG 45 are new – the latest additions to Mercedes’ rapidly expanding product portfolio.  Both are based on the CLA sedan – which was new last year. The CLA and GLA are the first FWD-based vehicles Mercedes has ever offered for sale and as such amount to a parking brake 180 for Benz, which until the debut of the CLA sold exclusively RWD-based vehicles. 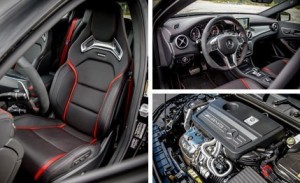 Kills the Soobie at the pump, too.

Useful hatchback layout (’15 STi’s sold only as a sedan now). 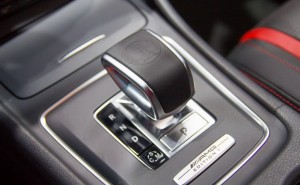 No manual transmission (STi still has that).

Shallow – and too close-together – cupholders.

A couple of electronic nannies could be kicked to the curb – including the one that won’t let you back the car up (or move it forward) if the driver’s door is open.

How much power can be squeezed out of a little engine?

The GLA hints at what is possible. Its 2.0 liter four cylinder conjures 355 hp – a number that must be put into some context to appreciate fully. If you were to take two of them and create a V-8 of just 4 liters’ displacement, you’d have an engine making over 700 horsepower. Mercedes crows that its 2.0 liter engine is the most powerful four cylinder production engine you can buy – at any price. 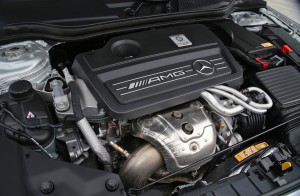 Two of them working together would trump the new Dodge Challenger Hellcat’s Hemi V-8 … which has appx. 20 percent more displacement.

Or, more directly, ponder what Benz has done in light of what Subaru has done with 2.5 liters.

Power meets pavement via a launch-controlled, three-mode, AMG-enhanced seven-speed automated manual and 4-Matic all-wheel-drive. The latter features torque-vectoring (which the standard GLA’s system does not). This enhances high-speed cornering tenacity by modulating power to the inside wheels as you apex. 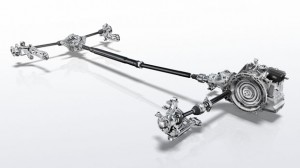 Even more startling, the Benz is easier on gas than the less-powerful/not-quicker Subaru.

It rates 23 city, 29 highway – vs. the STi’s fairly horrendous 17 city, 23 highway. This makes up for the Benz’s comparatively small fuel tank – 14.8 gallons vs. the Subaru’s 15.9 gallon tank. Which the latter needs – if you plan to drive it any distance.

Despite its lesser fuel capacity – the GLA can travel farther than the STi in between fill-ups, because its engine uses less gas. About 60-70 miles farther, if you do the math. 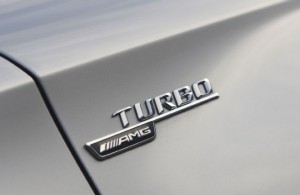 Ever dealt with an angry snapping turtle? Got too close to those lightning-fast cruel jaws? The fingerless will have learned through experience about how not to handle such a beast. Respect it. Or just leave it alone. Similarly, the unwary who’ve yet to familiarize themselves with the nomenclature had better learn up before squaring off against anything with AMG on the fenders.

Those three letters spell out pain and humiliation… for other drivers. A feeling – the actuality – of invincibility for you.

Membership has its privileges.

My test ride was painted chocolate brown metallic, allowing it to lurk just like a snapper awaiting his next meal. No need for codpiece-style airfoils to project the image of power when you’re packing the real deal.

This is not merely a speedy car. Plenty of those out there. It is a wild and speedy car. And that is rare nowadays.

First the exhaust. Not the standard-issue set-up (which is perfectly adequate). You’ll want the optional ($450) AMG “Valvetronic” exhaust.

Each tip has its own wastegate – just like a turbo – that snaps open under WOT to allow unrestricted blasts of exhaust into the atmosphere, each of which sounds just like a mini sonic boom, erupting at each gear change as you proceed.

It’ll wake up the Yuppies next door every time. 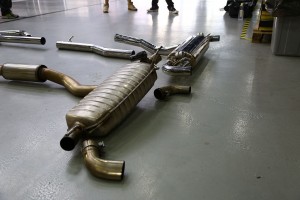 Remember the Cheech and Chong movie where the first thing Chong does in the morning is fire up the Harley in his living room, with the pipes feeding through the wall and directed at the next-door neighbor’s house? It’s kind of like that – except classier. Turn the key (still physical – just not metal) and … rrrrrrrrraaaaappp! When driving, if you feather the accelerator, you can make ’em “talk back,” too.

Does this thing even have catalytic converters?

Huge diameter pipes bellicosely project rearward, reminding me of my high school friend Stu Monster’s ’71 Plymouth GTX 440 Magnum and its gatling gun tips. The tailview (and sounds coming out of those pipes) radiates do not fuck with me. 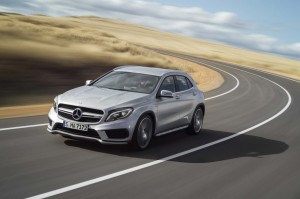 Inside, you are snugged into the Recaros, built especially for this ride – and necessary, considering what this ride is capable of. They are trimmed in handsome red piping, with brushed metal facings along the headrests that match what’s on the dash and door panels. Buckle up (or not) and firmly grab the suede-covered AMG steering wheel.

Toggle the seven-speed into Drive via the stubby little e-shifter on the center console and engage the most aggressive (Sport) setting. With not-far-from-400 heavily turbocharged horsepower about to hit you in the small of the back, launch control is advisable. There is a brief moment of what feels like turbo lag just after you floor it, the eye of the hurricane. Then it comes. All four tires scalp the pavement, then hook up. The car lunges forward, each of the seven-speed’s uber-firm upshifts punctuated by an audacious snapping of the wastegates. Less than five second pass before you’ve hit 60 and if you keep your foot in it another five seconds, you will have committed a technical felony in most states. But unlike doing the same in an STi, the GLA helps you get away with doing it. Though its powertrain is as raucous as a full-on kegger at the Delta House, it does not project adolescent exuberance as obviously as the STi does. The latter is a fantastic track day car. But the former is a track day car you can use for its intended purpose on the street.

Especially if it’s chocolate brown metallic, like my test car. 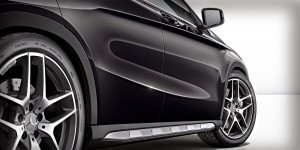 Just as Subaru drops the hatchback ball, Mercedes picks it up… and runs with it.

For inscrutable reasons known only to the home islanders, the ’15 STi is (for the first time) sold as a sedan only. This means it has a tiny trunk (12 cubic feet) and is therefore much less useful for things other than going places quickly.

Meanwhile, the GLA 45 is a hatchback. Like the STi used to be (or at least, used to be available as). It has a larger “trunk” (17.2 cubic feet) and vastly more total cargo capacity (43.6 cubic feet with the second row folded flat). This makes it useful for going places quickly and other things, too. Which makes it a viable full-time/everyday – even a family – car. One could try to purpose an STi sedan that way, but the package is simply not as amenable. 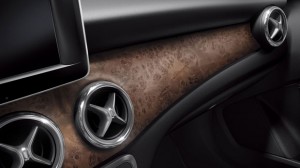 And keep in mind the cop-provoking looks of the STi, and its notorious rep.

The GLA is still an unknown – and much lower profile, in terms of the image it projects. At least, until you blip the throttle and let those AMG pipes speak.

But it’s also a luxury car – and here we come to another meaningful difference between the GLA 45 and its conceptually-functionally similar Subaru rival.

Which is not an inexpensive car. 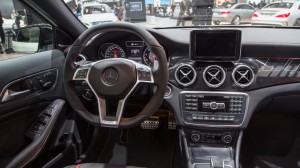 But unlike the STi, the GLA 45 is far from being a souped-up economy car …

The STi starts at $35,290 and with a few options, it’s not hard to get close to $40k. Yet no matter what it’s capable of, it’s still a Subaru – and its Impreza roots show through inside, which is a comparatively bleak and plasticky-looking place when compared with the lush, form-fitted cabin of the GLA.

Though nominally one of Benz’s lesser models, the CLA-based GLA’s interior is as upgraded as the hand-assembled AMG powerplant under the hood. And the difference is not merely nicer panels bolted in place of less-nice ones. Though you get those (nicer panels, including brushed nickel or real carbon fiber) too. The CLA’s sensual, flowing dash forms the centerpiece, with aircraft-style ball vents serving as handsome (and functionally superior to the usual vertical-horizontal slats) accent pieces. Toward the center is a slick iPad-esque LCD screen which displays an electronic-age interpretation of an old school radio dial. The combined effect of these details is retro, slick and ultramodern. 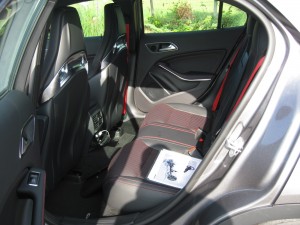 The one functional deficit is back seat legroom. Which – as in the CLA – is not much: 33.9 inches. As opposed to 35.4 inches in the STi. However, second row headroom in the GLA (38.4 inches) is noticeably better than in the STi (37.1 inches), credit for the difference going to the Benz’s more gradually tapered hatchback roofline.

The two upholder cut-outs in the center console suck. They are too shallow, too close together and their diameter insufficient. Put two typically medium-sized cups of coffee in them and both are likely to spill when you try to remove one – because the cups touch and not only that, the more forward one sits slightly underneath the one behind it such that you have to pull the former up and forward to clear the latter – and the jostling and tilting inevitably leads to spilling.

This sort of thing is a commonplace in German cars; their way of saying: Cars are for driving, not coffee klatching.

The last day I had the GLA, it snowed and iced overnight. Next morning, I needed to back it up a few feet to make room for another car. I didn’t feel like scraping off the ice-encrusted rear glass, it being cold outside and my not needing to actually drive the car anywhere. So instead I cracked open the door and shifted into Reverse, leaning out a little through the open door and looking rearward as I backed her up.

Except I could not back her up.

I get the basic idea; it’s not good policy to drive down the road with the door open. But who does that? And what’s “unsafe” about carefully backing up a car the old fashioned way, using your eyes instead of a rearview camera’s? 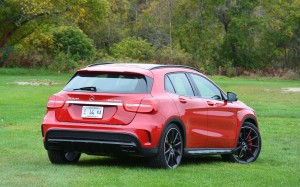 It’s hilarious – and wonderful – that Mercedes is building cars like this. Good god almighty! I haven’t enjoyed myself behind the wheel this much since they sent me a Porsche Cayman S last summer – and that was a totally different kind of fun. Tempered by paranoia – which anyone with his head screwed on right will feel when driving a Porsche anything – or a Subaru STi, for that matter. You stick out like Borat in a yellow thong at Sunday Mass – and can expect to be dealt with as such by any cop in your orbit.

I prefer the kind of fun you can get away with. Repeatedly.