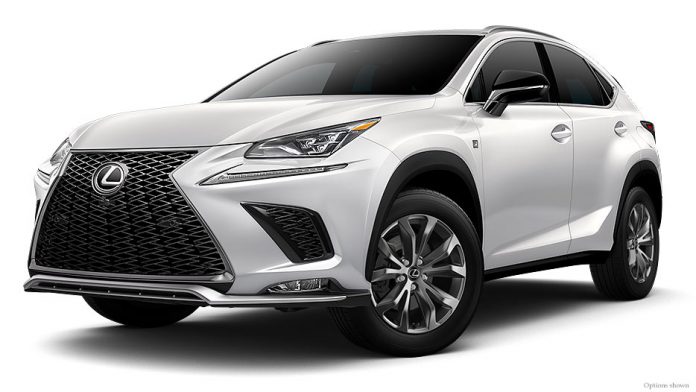 No one knows who invented the shoe – but not surprisingly, it caught on.

The crossover is another such idea – and we know whose that was.

Obvious now. Radical – and brilliant – back then.

It gave people who wanted SUV-ish attributes – commanding driving position, decent snow-day capability – but not necessarily the SUV to go with them – just what they were looking for. 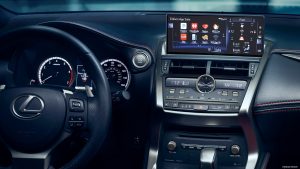 It’s a crossover, like the RX – but lower-slung and personal-sized rather than family sized.

Just the ticket for people who want some RX-ish attributes – but not necessarily the whole RX enchilada to go with them. 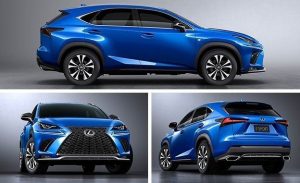 The NX300 is a compact-sized luxury/sport crossover – in the same general class as the Audi Q3 and Q5, the Mercedes-Benz GLC 300 and Acura RDX, among others.

It is about a foot shorter overall than its mid-sized big brother, the Lexus RX350 – but almost matches its specifications for first and second row legroom, as well as cargo room – which means it’s a viable option for people who want something with a smaller footprint but with enough space inside to regularly carry more than just two people. 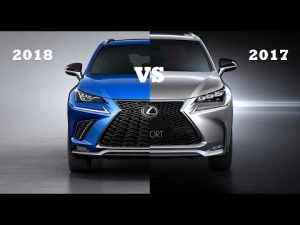 The physically smaller and much less roomy Audi Q3 starts at $32,900 ($35,000 with Quattro all-wheel-drive). The roughly same-sized/comparably roomy Audi Q5 starts at $41,500 (Quattro AWD is standard with this model)

There is also the Acura RDX – a wild card in this class because it’s the only model left in this class that still comes standard with a V6 engine; the others all come with turbocharged four cylinder engines. The RDX is also the roomiest of the bunch – and is very competitively priced at $35,800 to start ad $37,300 ($37,300 with AWD). 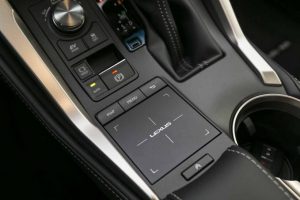 For 2018 the NX gets a new front clip with standard LED lights, sound-muting acoustic exterior glass (all trims) some suspension re-tuning and an updated suite of apps for the standard 8-inch and the optional 10.3 inch Lexus Display Audio touchscreens; the latter also includes complimentary Lexus Enform 4GB wi-fi service for one year.

Also, the mouse/trackpad input – Lexus calls this Remote Touch Interface – is 30 percent larger, which is meant to make it easier to use.

Sportier-looking (and driving) than the larger-on-the-outside RX – and costs a lot less, too. But still nearly as roomy inside and so almost as practical as its bigger – and pricier – brother.

Much roomier – and so much more practical –  than price-comparable Q3.

Much more affordable than size/room-equivalent Q5.

Tows more than the V6-powered RDX. 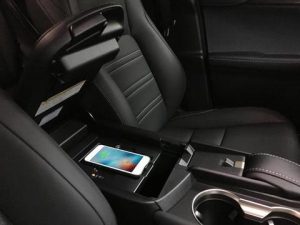 Racy-looking F Sport package does not include a horsepower upgrade.

Center console has decent capacity but access is awkward.

Henry Ford famously told his customers they could have any color model T they wanted – so long as it was black. 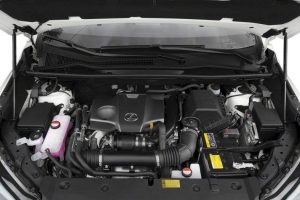 A similar situation has developed with regard to what’s under the hood of the various medium-small luxury crossovers on the market right now. You can have any engine you want  . . . so long as it’s a turbocharged, direct-injected 2.0 liter four.

If you want something else – especially something larger – you are largely (excepting the aging Acura RDX) out of luck. 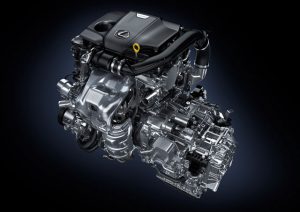 Two reasons why. The first has to do with regs in place in Europe that apply taxes on engines larger than 2.0 liters. Lexus and Audi and Benz and all the rest want to sell cars there as well as here, so they design engines that are viable in both markets rather than one for there – and another for here. 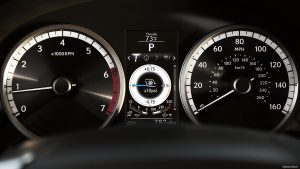 Do the math. The four cylinder/FWD NX200 only manages to rate 2 MPG better in city driving on the EPA’s test loop than the the V6/FWD RX – and delivers the same 28 MPG on the highway.

It’s a difference without a distinction.

Except insofar as “corporate averages” are calculated. These are based on all the NX300s (and RX350s) Lexus makes, which is tens of thousands of them. When you factor that seemingly trivial 2 MPG difference times tens of thousands – which is how “corporate average” numbers are calculated – the difference becomes significant and amounts to lots of dollars – in terms of the fines levied by the government for not achieving compliance with the mandatory minimum, currently set at 34.5 MPG. 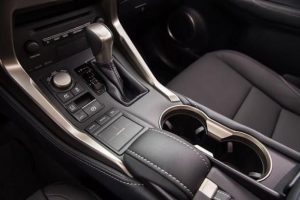 Alarmingly, this mandatory minimum is on deck to rise to a catastrophic (for the industry, for us) 54.5 MPG just a few years hence – if Trump doesn’t kibosh it. In the event he does not, we will be lucky to see engines as large as 2.0 liters still offered in anything.

The NX’s turbo four makes 235 hp and 258 ft.-lbs. of torque at 1,650 RPM (this low torque peak is the main benefit, to us, of these small, turbocharged engines). It is paired with a six-speed automatic and your choice of FWD or AWD.

The FWD version gets to 60 in 7 seconds flat; the slightly heavier AWD version clocks in at 7.2 seconds to 60.

These are good numbers for the class, especially vs. price-equivalent rivals like the Audi Q3 – which has a much less powerful (200 hp) 2.0 liter engine and takes 7.8 seconds to get to 60. 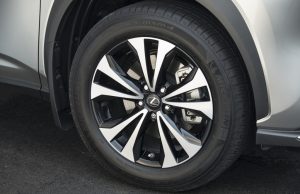 The V6 powered (3.5 liters, 279 hp) Acura RDX is quicker (6.2 seconds to 60) but not as much as you’d expect given its much larger, much stronger engine. Which, incidentally, stil manages to deliver 19 city, 28 highway – a difference without a distinction vs. the turbo four-powered models in this class.

The Benz GLC300 is the ripper in this class.

Although its standard 2.0 liter four isn’t that much stouter – Benz claims 241 hp – the GLC somehow manages to get to 60 in 5.9 seconds. Some of the acceleration differential may be due to the Benz’s close-ratio nine-speed automatic, but the rest is likely the result of some friendly fudging of the engine’s actual horsepower production.

Its mileage is about the same as the others: 21 city, 28 highway. 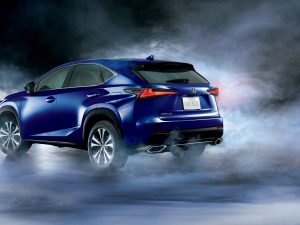 Interestingly, the V6 powered Acura RDX is only rated to pull 1,500 lbs.

The Benz GLC – which is built on a more rugged RWD-based chassis – can pull a class-best 5,300 lbs. 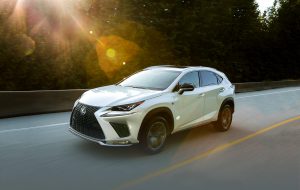 Though they’re born of government regs more than buyer wants, small, heavily boosted fours may be better suited to the job they’re tasked with than larger (but not turbocharged) sixes that make good power and torque – but not until higher up the power band, where that power and torque aren’t as accessible.

So even though the Acura will eventually – and just barely – outrun the Lexus at the end of an all-out 0-60 sprint, the Lexus feels stronger initially – when the light turns green, coming off the line. 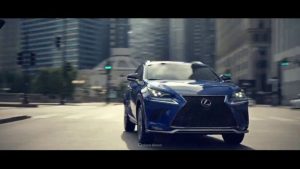 And it feels less stressed. No need to rev to get action.

Credit for that goes to the use of small, twin-scroll turbocharging which – along with direct injection and high compression – almost completely eliminates the momentary pause in between you flooring the accelerator pedal and the car actually accelerating. This lag used to be the turbo’d engine’s main gimp – as well as its main draw.

In a high-performance sports car, the lag – followed by a sudden neck-snapping blitz of boost, a tire-skittering tsunami of horsepower and torque – was part of the fun. But in a luxury car, that sort of thing is uncouth – almost like the boss ass-slapping a hot young intern. 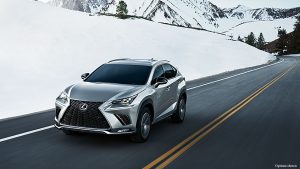 And this is why turbo’d engines were formerly found almost exclusively in high-performance sports cars.

Now, they’re found in almost everything – and not just because of the necessity of figuring our some way to make Uncle happy while also keeping buyers happy.

If there’s a deficit to this deal it’s that the NX’s engine is maybe a touch too quiet. So quiet that sometimes you wonder whether it’s there – or whether you bought a hybrid. Lexus tacitly concedes the point, too – by including an “active” sound generation system that uses the stereo to make the engine’s existence more noticeable. 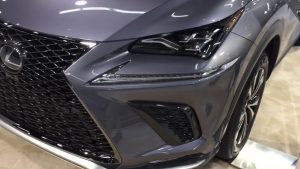 If you buy the F Sport package, you’ll get a slightly firmer ride (chiefly because of the shorter-sidewall 18-inch tires that come with the deal) as well as sharper steering feel, but it’s not a particularly aggressive package in terms of function. The aggression takes a more visual form – angry Samurai face.

The NX still feels sportier, though – which is both a function of its more compact size as well as its more intimate interior and the shape of the interior, which from the perspective of the driver (especially at night, when everything’s lit up) conjures the vibe of being in the left seat of a speedy corporate jet. 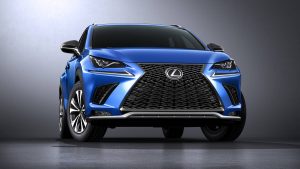 The NX is more wildly styled than the RX, but don’t let the wild child looks deceive you. They are mostly for show.

It turns out the NX is a very practical personal jet, with nearly as much room inside as the RX.

Size/space differences are much more noticeable is vs. rivals like the Audi Q3 – which has a very tight back seat (31 inches of legroom) and only 48.2 cubic feet of total cargo capacity.

The larger (same size as the NX) Q5 gives you 41 inches of legroom up front, 37.8 inches of second row legroom, 26.8 cubic feet of cargo capacity behind the second row and a total of 60.4 cubic feet with the seats down – but it’s not a huge upgrade in terms of space and the Q5 costs thousands more to start. 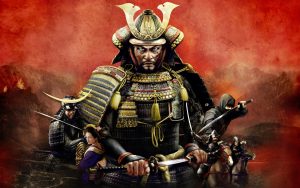 The main thing you get for your dollars is the ability to outrun the NX (the Q5 can get to 60 in 5.9 seconds).

Ditto as regards the Benz GLC300.

It has about the same interior space (less legroom up front, actually; slightly more cargo capacity in back) but its starting price is much higher. The main thing you get is a quicker 0-60 time. How much is that extra second worth to you?

Well, you also get a more traditional look.

The NX – even the non F Sport version – is an unusual looking vehicle. It’s an automotive shogun, which you either dig – or you don’t.

Kudos to Lexus for taking the risk.

The center console storage cubby is pushed too far back for easy access to the USB ports and the 12V power point,  especially while driving.

On the upside, both the standard 8-inch and optional 10.3 inch touchscreens are larger than what you get in competitor models and though initially intimidating, the RTI mouse trackpad input is user friendly once you get used to it. This will take a few days, however.

In defense of Lexus, every model in this class has the same steep learning curve – with the exception of the almost-antique RDX. 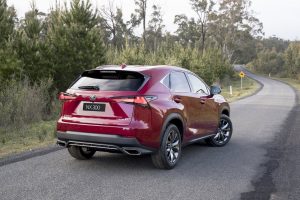 One thing that’s still traditional about the NX is its gear shifter. Meaning there actually is one – as opposed to a button to tap or a knob to turn. This is frankly welcome, if you prefer the traditional tactile feedback you get from a gear shifter you pull toward you for Drive and slam home for Park.

Also, there’s no lag with this set-up – the brief (but noticeable) pause while the computer figures out whether you wanted to engage Drive or put the thing in Park.

The NX probably isn’t a game-changer like the original RX was – but that doesn’t mean it hasn’t got game.