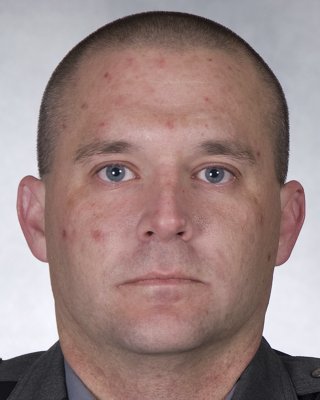 A State Highway Patrol trooper is among six men charged with drug trafficking in Delaware County, accused of dealing and providing cover for other dealers.

An investigation begun in June by the Delaware County Drug Task Force and the FBI followed suspected dealer Nicholas Glassburn, 47, of Delaware, which officials say led to his sources and suppliers, including Trooper Jason Delcol.

Delcol, 43, and Benjamin Owings, 37, both of Delaware, are each charged with crimes related to the sale of a human growth hormone. Delcol is charged with an additional count of witness tampering.

Delcol, a trooper since 2001, had good reviews until 2012, when he was fired for illegal narcotics use. He told his superiors that he needed the drugs for back pain. He was given a second chance, which he failed in 2014 and again was fired. He was given his job back a second time as a result of an arbitration hearing.

Others charged include: Carlos Carvalho, 42, of Sandusky, and William Covrett, 41, whose address was not available, each on charges of money laundering; and Stevedore Crawford, 55, of Columbus, on intent to distribute and distribution charges.

According to an affidavit in the criminal complaint, Delcol was believed to be a middleman for Glassburn’s dealing, both receiving and providing drugs to Glassburn and others, and helping Glassburn evade law enforcement.

Delcol provided Glassburn with the protective vests before Glassburn met with Carvalho, whom he owed$17,000 for marijuana, records show. Carvalho likely was one of Glassburn’s main sources for drugs, the affidavit reported.

On Aug. 5, 2017, at about 4:30 a.m., police in Morrow County found Glassburn asleep at the wheel of a vehicle with a drug pipe in the back seat. Cocaine and a cocaine base also were found.

Glassburn told police he was tired and had found the drugs in one of his children’s bedrooms. He said he called Delcol, a friend, and asked for advice.

A deputy had Glassburn call Delcol to verify the story. Delcol told the deputy that Glassburn “had children who were problems and also said he did not know Glassburn to be involved with drugs.” During a recorded follow-up call with police, Delcol again defended Glassburn.

All but Covrett are in custody pending detention hearings set for Thursday at the federal courthouse in Columbus.