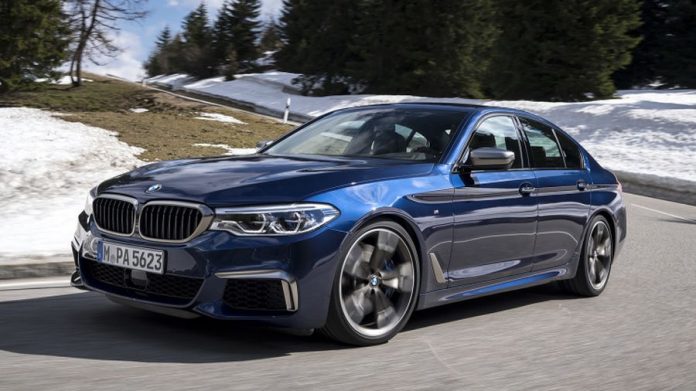 What’s better than a BMW 5 Series with an M on the trunk lid and a twin-turbo V8 under its hood?

How about two 5 Series Ms?

Whoever said speed is just a question of money? 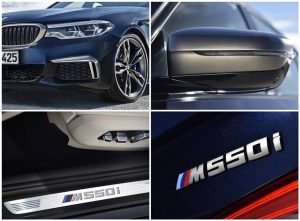 The M550i and M5 are the high and highest-performance versions of BMW’s mid-sized 5-Series sedan.

The M5 is familiar. It’s been the ultimate 5 Series since 1986, when the first hand-built examples were offered for sale. The idea was to instill serious speed – and handling – into a car with more than just two doors so that people who wanted such attributes did not have to buy two cars.

BMW’s Motorsports engineers took the very high-performance engine/transmission and suspension bits from the company’s exotic M1 coupe and put them all into the 5 sedan.

Now BMW is offering that in two four doors. 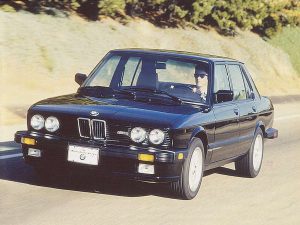 It’s a bit less extreme than the M5, but only in relation to the current M5 – which is on the verge of proving Einstein wrong about physical objects not being capable of achieving light speed.

Which wasn’t as quick as either of them.

Both are also the first 5 Series Ms to come standard with all-wheel-drive and without the option to buy a manual transmission.

This was done because speed isn’t just a question of money.

It is also a question of traction. 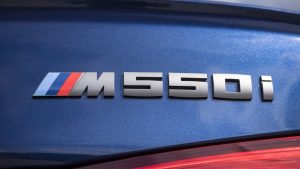 The new M550i has almost twice the power of the original ’86 M5 – and the new M5 has more than the double. Translating that into acceleration rather than smoke via just two wheels isn’t easy –  even with 20 inch wheels and the latest in tire technology.

It’s a recipe for tactical nuke burnouts. Which is definitely fun but also bleeds speed. If you want to hook it up, you want the power going to the pavement.

The manual has been retired for similar reasons. The car is quicker with the now-standard eight-speed automatic, which eliminates the Human Variable from the equation. Just floor the accelerator – the computer will handle the shifts. 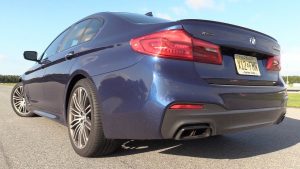 Of course, efficiency isn’t everything when it comes to a car such as this – which is as much about fun as it is about speed. Some – me among them – will miss being able to shift for ourselves, even if the computer can do it better and quicker.

But at least you’ll still be able to do a burnout, if you like.

Its AWD system can be disconnected at will. This is almost as fabulous as voluntary income taxes.

Well, we can’t have everything. 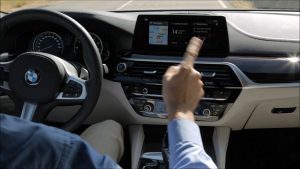 Either M can do the zero to 60 run twice more quickly than most cars can do it once.

Many amenities formerly exclusive to the top-of-the-line 7 Series, such as as massaging seats, a 16-speaker ultra-premium Bowers & Wilkins stereo, infra-red night vision, twin rear 10.2 inch touchscreen monitors, BMW’s gesture control system (you can twirl your finger to adjust the volume of the stereo, dismiss a call with a wave of your hand) and a key fob with its own LCD display that can be used to park the car remotely are now available in these more accessible Fives.

Anyone can drive it fast – without getting it sideways. 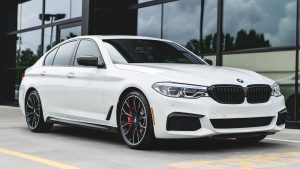 There’s less for the driver to do now.

The car sometimes does too much.

For example, the computer will put the transmission in neutral if you try to back up with the driver’s door open – which some of us still do because directly eyeballing what’s behind us sometimes just gives a better view than the back-up camera does.

Noticeably less headroom than in the Benz E sedan. 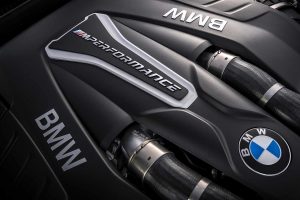 Most Fives come with a four or a six. What makes a Five M special above all is that it comes with a V8.

The M5 has for years, of course. But now there’s the M550i, too. Both feature the same basic twin-turbocharged 4.4 liter V8, paired with an eight-speed automatic and BMW’s xDrive all-wheel-drive system.

There are differences, of course. Otherwise, it’d be hard to justify the 2018 M5’s $30k higher price difference. 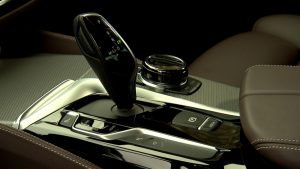 Not a typo. Let it all sink in. To get faster will involve wormholes. And you can disengage the M5’s AWD. If you’re in the mood for a new pair of rear tires.

But that doesn’t mean you’re losing out by going with the M550i. Everything is, per Dr. Einstein, relative.

This time, you can’t disengage it – so there’ll be no tire-frying. But that’s the point. To get from A to B as close to instantaneously as possible. Which the M550i certainly does. And if you must fry tires, there’s always the M5. 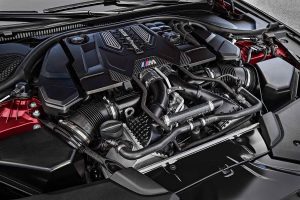 Burnouts or not, the M550i is literally in a class by itself.

It is the only V8 ultra-car you can buy for $70-something K. The price-equivalent Mercedes-Benz E43 AMG is six cylinder-powered and considerably less powerful. Its twin-turbo 3 liter V6 makes 396 hp and the car takes about 4.5 seconds to get to 60 – which  seems almost slow . . . relative to the M550i.

And even then, you aren’t allowed to disconnect the AWD. 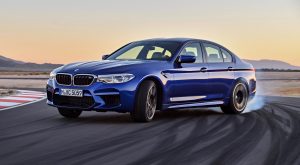 Fast cars used to be ferocious . . . all the time. This made them difficult companions some of the time. In traffic, for instance. Commuting in one was like using a Lipizzaner stallion to plow a field.

It can be done, but the horse isn’t happy – and neither are you.

These two can be fierce – when fierceness is wanted. Toggle up Sport+ (your other choices are Eco – which is hilarious – and Comfort) then cinch yourself in tight. The gauge backlighting goes angry red, the instruments change to serious and the car is ready to go to war. All you have to do now is floor the accelerator pedal. The car will take care of the rest. 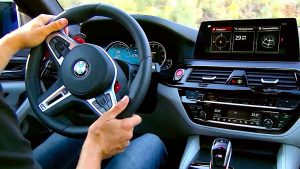 Before you’ve finished reading the last sentence, you’re at 60 – accompanied by the sonic boom of the magnificent V8.

By the time you’ve read this far, the car’s doing 100 and climbing fast. In less time than it takes to finish reading this paragraph, you will have arrived at the car’s electronically limited top speed of 155 MPH.

The M5 is almost too fast.

You are simply there. 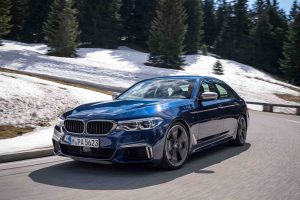 And if you leave the AWD system in AWD, this will happen without the usual indicators of serious speed: The sound of tires squealing, the scent of rubber burning, the sight of tire smoke in your wake. It is almost unreal.

Or, toggle to RWD – and let slip the dogs of war.

But when your are not doing naughty deeds with all this speed, the V8s are tranquil. This is the real reason why there’s no replacement for displacement. Their tremendous torque negates the cars’ weight, whether from a standstill or on a hill or when you’re doing 70 and need 80.

And that V8 burble. It’s still there but a low growl now. Think of a sleeping Rottweiler.

BMW touts – correctly – the increased high-speed cornering grip that comes with the now-standard AWD – and while there’s no arguing this, the real/everyday advantage is wet weather grip, which the prior (and rear drive-only) M5 lacked.

These new Five Ms are almost any day cars. Neither are meant for snow, of course. But that’s an infrequent inconvenience. 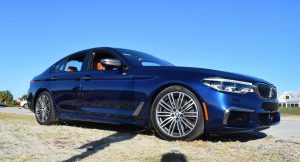 Sun Tzu advised feigning weakness in the face of the enemy – even when you are stronger than the enemy. In order to surprise him – and to never be surprised by the enemy. The M Fives take this advice to heed. These two very special Fives are almost indistinguishable from the run-of-the-mill 530i and 540i.

The wheels/tires are bigger, of course. And so are the brake calipers. People who know the deal will recognize the angrier-looking front clip, the lower stance, the staggered stance – slightly inward – of those fatty tires. The quad tip exhaust under the rear valance panel and – of course – the tri-color M badge on the trunk lid. But it’s subtle, almost like a Masonic handshake. 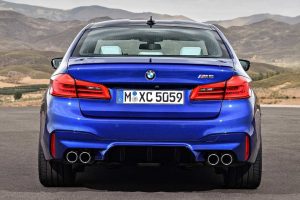 This makes them smart fast cars.

You can do things with a fast sedan that you can’t with a coupe. Transporting more people, of course. But that’s just a practical perk. The tactical perk is not drawing eyes. You bought this car to use it.

Not to get caught using it.

Which is hard to do – and get away with doing – when everyone is eyeing you. Driving a 911 or a Corvette – even when driving the speed limit – is almost like showing up at a cop shop with white powder all over your nose. These BMWs are discreet. Subtle.

Up front – and in back. Forget that in a coupe. 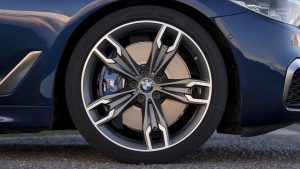 The driver and front seat passenger can enjoy the available massaging seats; the people in back can watch a movie – different movies – on the two 10.2 inch LCD displays. Both Ms get M-specific trim inside, too – the M5’s being more racy looking and also including bolstered sport seats.

There’s no faulting the looks – or the amenities.

But there is an issue with headroom. The Fives have 38.8 inches for the driver/front seat passenger – vs. 41.4 inches in the Mercedes E. If you are less than six feet tall, it won’t be a difference you’ll notice. But if you’re taller than six feet, you may. I am six feet three and the left side of my head was close enough to the headliner to occasionally brush against it. 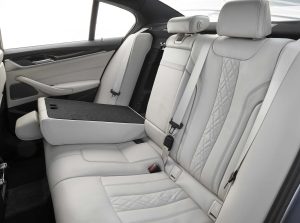 Part of the trouble is that a sunroof is standard in the Fives – and this eats up head space, particularly up front. Note that the back seat headroom stat for the Fives (37.5 inches) is only a little bit less than in the E sedan’s backseats (38.2 inches). It’s because of the sunroof – which doesn’t extend as far back as it does up front. 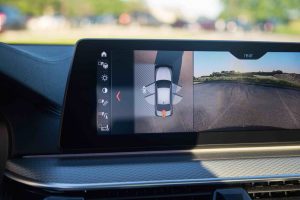 These cars come with a 360 degree camera that shows pretty much everything around the perimeter of the car, with colored proximity bars to let you know how close you are to them, in order to avoid bumping into them while trying to park.

Or, let the car park itself. The Fives offer the same key fob automated park system that debuted in the 7 Series a year or so ago. It’s a preview of Things to Come. 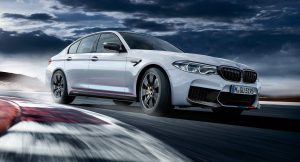 And the 2018 M5 will upend what you thought you knew about relativity.

I’ll miss the manual. But there’s no complaining about the speed – or the discount.

Plus you can still get sideways, if you are into that.