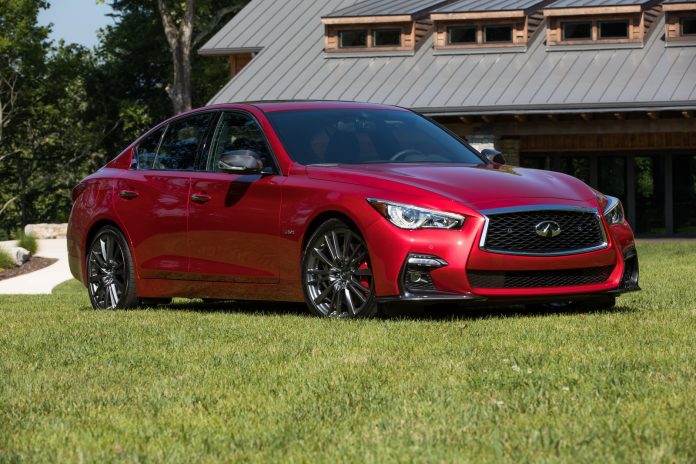 Infiniti’s cars are not named well. The Q50 sedan, for instance. Neither the letter nor the number seems to stand for anything identifiable about the car.

Besides which, it just sounds bland and boring.

The good news is, the car’s not.

It’s becoming common practice for car companies to pair the hairiest engine they offer in their cars with mandatory all-wheel-drive, in conformity with the dictum of the Safety Cult that fast cars ought not to be capable of such anti-social actions as rooster-tailing sideways out of a parking lot, leaving twin black patches (and a haze of smoke) in their wake. 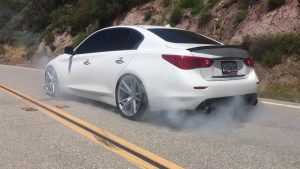 Infiniti offers AWD – and in all versions of the Q, including the 400 hp Red Sport version – but it’s up to you to decide whether you want that.

Or prefer to burn rubber.

The Q is also a smoking deal.

It’s almost $20k less to start than size (and room) equivalent rivals in this class like the BMW 5 Series and the Mercedes E-Class, each of which gives you much less engine – and fewer engine options – for much more money. 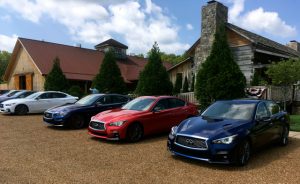 It’s slightly less mid-sized on the outside than the BMW 5 sedan and Mercedes E sedan – both of which are a few inches longer overall. But the Q actually has a much roomier first row –  by about three inches – and about the same room in its second row.

And it is also much closer to being mid-sized on the outside than the compact-sized BMW 3 Sedan and Benz C-Class sedan.

The Q is also available with your pick of four available engines – as opposed to the usual two. These range from the standard 2.0 liter turbo four in the base trim to an available twin-turbo V6 in the top of the line Red Sport – and any of them are available with either rear-wheel-drive or all-wheel-drive. 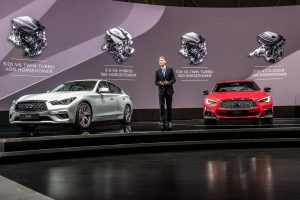 The top Q is the Red Sport, which comes with a 400 hp version of the twin-turbo V6, along with other driveline, brake/suspension upgrades and a more visually aggressive exterior and interior look. The Red Sport Q is also available with either RWD ($51,000) or AWD ($53,000).

Finally, there’s the hybrid version of the Q – powered by a 3.5 liter V6 (no turbo this time) paired with the usual electric motor/battery pack. It, too, is available in both rear-wheel-drive and all-wheel-drive versions. 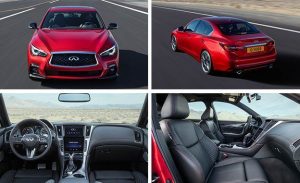 The main change for 2018 is more not-so-great naming.

The previous – and more comprehensible –  base and Premium trims have been dropped and now there are Pure (as in Pure thoughts?) and Luxe (can anyone spell anymore?) trims in their place.

The Sport and Red Sport trims remain in place.

Even if you order the latter painted black. 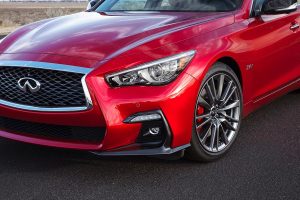 Avoid the driver-usurpation “safety” technologies –  that are becoming unavoidable in the others. 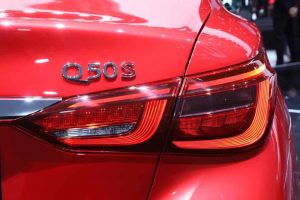 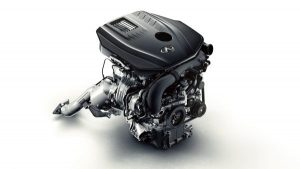 In all of them, you can go rear-wheel-drive or opt for all-wheel-drive.

The  Benz and BMW turbo fours are more powerful than the Q’s – and they have the additional advantage of transmissions with tighter gear spacing, which explains why they are slightly quicker. The four cylinder Q takes close to 7 seconds to get to 60 while the 5 and the E with their fours get there in about 6 flat.

But the Q offers more than a four. 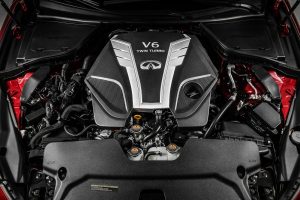 Next up is a 300 hp twin-turbocharged 3.0 liter V6. So equipped, the Q is quicker than the four cylinder-only E-Class (there is no engine upgrade here unless you buy one of the ultra-performance and ultra-expensive AMG versions of the E; these start at $72,595) and the four-cylinder BMW 5 – which already costs some $20k more to start than the Q with the four and still costs about $12k more than the V6 turbo-powered Q.

If that’s not enough, you have one more option to consider. The Red Sport version of the Q. The centerpiece of which is a 400 hp version twin-turbo V6, boosted from 9.5 psi to 14.7 psi. It is also paired with the seven-speed automatic but specially set up to be a ripper – along with your choice of RWD or AWD. 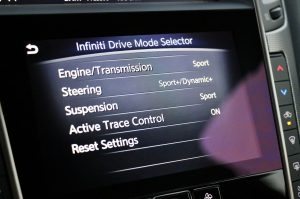 Equipped with this engine, the Q knows how to cut the rug. Zero to 60 in 4.4 seconds – outclassing any version of the BMW 5 and Benz E save for the exotically priced AMG versions of the E and the M version of the 5 – for thousands less than Merceds and BMW are asking for the top-of-the-line versions of the mass-produced E-Class and 5-Series (not the AMG and M versions).

And there’s a fourth option – if you’re feeling green-ish. Or just feel leery of turbocharged engines.

The hybrid version of the Q isn’t lacking for power. Its 3.5 liter V6/electric motor/battery combo make almost Red Sport power, in fact. Total output is 360 hp – and torque output is superior due to the Immediate Effect of the electric motor, which doesn’t have to spool up to make torque. 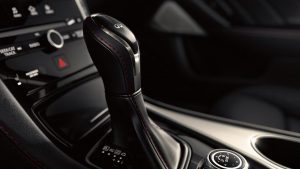 The hybrid hQ is the only version of the Q that hasn’t got a turbocharger bolted to the engine. This means no down-the-road worries about turbo-related maintenance and repairs. On the other hand, you will get the extra weight of the hybrid gear, which makes this version of the Q less quick than you’d think given its strong hp rating.

On the other hand, it also rates 27 city, 32 on the highway (RWD versions; with AWD, the MPGs dip a bit to 26 city, 30 highway). This is still damned good for a ripper. To put it in some perspective, the hybrid Q is twice as quick to 60 as a Prius hybrid.

Yeah, the Prius squeezes out another 15 or or so MPGs. But which would you rather drive to work every day? 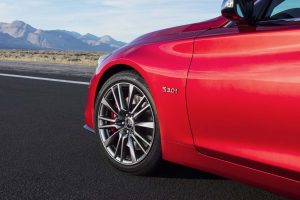 All the cars in this class are – nominally – luxury-sport sedans. But the emphasis has been shifting toward something different, the luxury-tech sedan. The BMW and Benz tout their toys as much as their goods. Indeed, they have lesser goods – but more tech – than they used to have.

The Q has more goods – and less tech.

You are not as second-guessed by driver-interference (my term) tech such as automated braking and buzzers that beep when a computer senses (through sensors) that another car or an object is within 50 yards (that’s an exaggeration, but not much) of yours. These tech features are available – if you want them – but they are optional. In almost all the others they are included – and several include more driver-interference systems, such as a steering wheel that vibrates obnoxiously when a wheel touches a painted line in the road; some even try to steer against you, like a pushy mother-in-law grabbing the wheel. 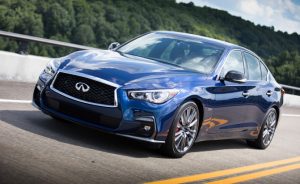 The most important thing to know about the Q vs. the others is that the thing is meant to move. The others seem more intent on drawing your attention to other things, such as the apps in the dash. Which is fine, if that’s what you’re into. But Infiniti is Nissan in luxury duds – and Nissan is a performance-minded brand.

Even the hybrid Q shows the lineage. 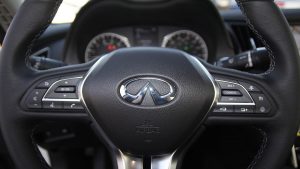 It has – more or less – the same V6 that powers the 370Z. And the non-hybrid Qs still have V6s – which is an engine type becoming rare in this class and generally because of the government’s strong-arming of the car industry with fuel economy mandates that V6s can’t readily meet but which turbo fours almost do.

There is something bleak about buying a $50k car and realizing all you’ve got under the hood is 2.0 liters and 240-ish horsepower. That is Hyundai Sonata territory – not that there is anything wrong with the Sonata. It is a fine car. 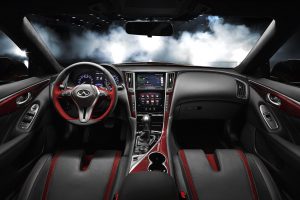 And A V6-powered $27k-ish family sedan will run with the $50k-ish base-engined versions of the BMW 5 and the Benz E.

The real fun, though, is the Red version of the Q. And why not? If you are looking at cars in this class, you were probably looking to spend about $50k. But at the Infiniti store, you’ll get almost twice the engine (and the power) for about the same price.

Without the mother-in-law in the dashboard. 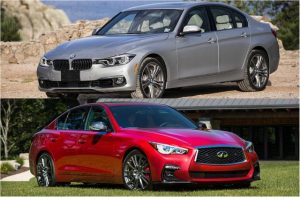 The Q50 is positioned smartly relative to its rivals – and not only in terms of price. Also of size.

It is a slightly smaller car on the outside than cars like the fully mid-sized E-Class Mercedes and BMW 5, both of which are much more expensive – and don’t offer more room on the inside. 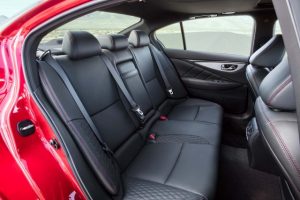 Meanwhile, the compact-sized BMW 3 – price equivalent to the closer-to-mid-sized Q – is a much smaller car. It is only 182.8 inches long overall. It also has less legroom up front (42 inches) and no more in the back (35 inches). The Benz C-Class sedan is also a much smaller car – 184.5 inches long overall, with 41.7 inches of legroom up front and 35.2 inches in the back. And it’s not even price-equivalent. Mercedes asks $40,250 for the least-expensive version of the C – the rear-wheel-drive C300. 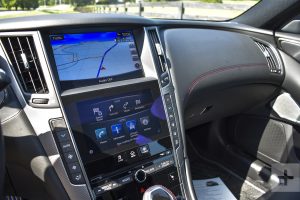 You can, however, get it with a manual transmission – or (for a bit more money) a diesel engine. The Q offers neither. Mercedes used to offer a diesel in the C but the late unpleasantness with VW has caused Mercedes to discreetly withdraw the BlueTec diesel engines it used to offer in the C as well as other Mercedes models.

All versions are equipped with a pair of secondary touchscreens for secondary functions such as the GPS/navigation, audio, climate controls and so on. These are located in the center stack, with the larger 8-inch screen on top of the smaller 7 inch screen. The main instrument cluster remains – happily – traditional analog rather than digitized. 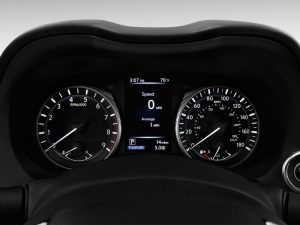 Big tach – redlined at 7,000-plus RPM- and equally big 180 MPH speedometer. As you’d expect to find in a serious car that also happens to be a luxury car.

Red Sport versions get racier bodywork – including carbon fiber exterior trim (rear spoiler, outside mirrors) and also unique-to-their-trim interior enhancements, such as quilted semi-aniline seat covers and red contrast stitching – but all trims look ready to rumble. The contrast vs. the more stately looking BMW 5 and Benz E is striking.

They are handsome cars, but there’s gray around the temples.

The Q is not for the cruise-control set. 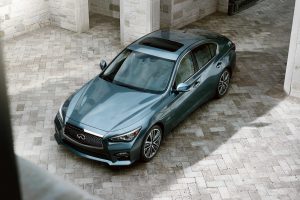 As detailed above, there is a lot of blur between the lines – between “mid-sized” and “compact” – but many buyers remain unaware of this and shop strictly according to advertised size. Which can lead to paying too much for not enough car, as here.

Most reviews pit the Q50 against compacts like the BMW 3 and Benz C. But the Q50 compares closer to the BMW 5 and the Benz E, and in many objective respects it’s more car than they are. 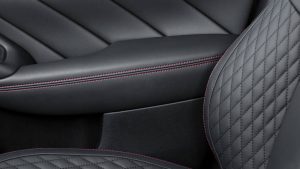 Certainly if you want a performance car that happens to have four doors. Infiniti does offer this same basic deal in a two-door (the Q60) just as BMW offers the 4 Series, for those who want the coupe’s sexier lines.

But the Q sedan reminds me of a woman who’s had kids yet hasn’t lost her figure.

It’s hard to find fault with this car, especially given what you’re getting – for what they’re asking.

Well, except for the name.