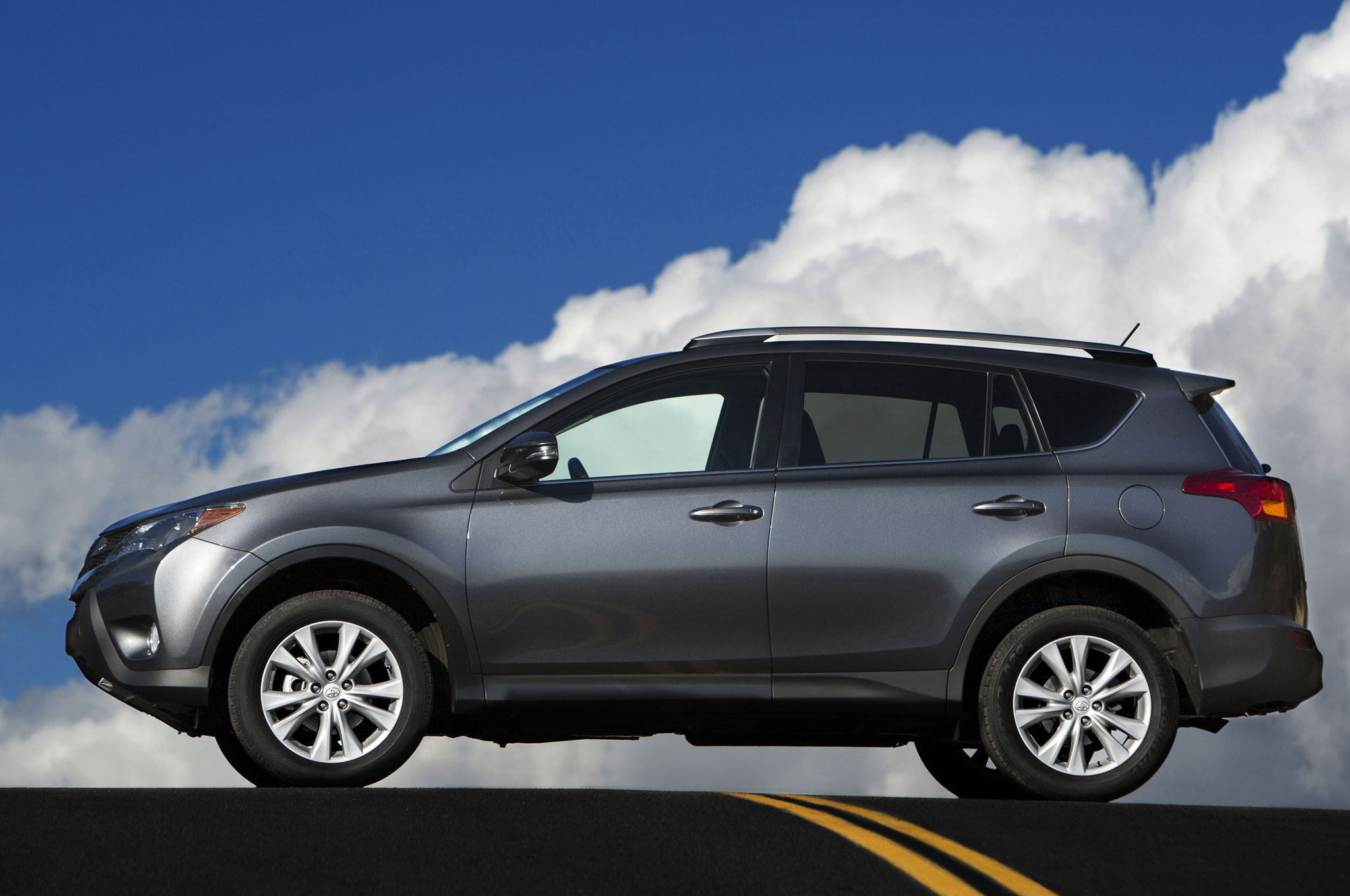 Toyota’s got these TV commercials featuring the Muppets, who assert the vehicles aren’t boring. 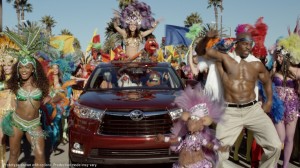 But is boring bad?

What if boring works?

I’ve owned (and driven) a lot of vehicles that didn’t work – which can be exciting, in good ways and bad – depending on when and how they stop working. Toyotas hardly ever stop working. They are relentlessly reliable (ask anyone), pleasant to drive, unobjectionable to look at and rarely surprise you with things you didn’t expect.

In other words – boring.

That works for a lot people.

Which is probably why Toyota sells a lot of cars like this RAV4. 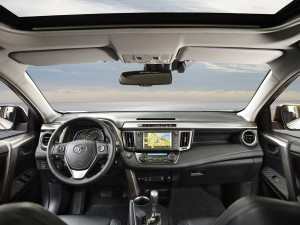 The RAV4 is Toyota’s compact (two rows, seats five) crossover SUV – exceptional in no particular way but extremely competent in every way.

All trims comes with the same engine – a four cylinder engine – and are automatic-only.

Competitors include models like the Jeep Cherokee – which is a bit more rugged and available with a V-6 engine – and the Ford Escape, which is  sportier and available with three different four cylinder engines (two of them turbocharged). Another possible RAV4 cross-shop is the Honda CR-V. 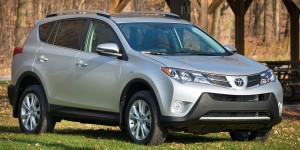 There are some new features and options, though – including a new Technology Package (Limited trims) that bundles a blind-spot monitor with Lane Departure Warning and automatic high beam control that dims the brights for you. 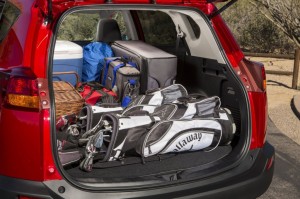 Easier to turn around (and parallel park) than many others in its class, thanks to much tighter turning radius than others in this class.

Your pulse will not race.

No optional engine (In export markets, Toyota offers a turbo-diesel engine in the RAV… but not here). 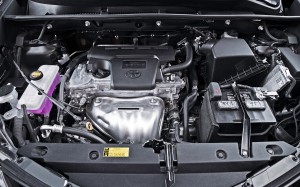 Every RAV4 comes with Toyota’s workhorse 2.5 liter four cylinder engine, rated at 176 hp and teamed up with a six-speed automatic and your choice (in each trim, base LE, mid-trim XLE and top-of-the-line Limited) of either FWD or AWD.

Acceleration – and fuel efficiency – are solidly middle of the road: Zero to 60 takes about 9.1-9.2 seconds (FWD vs. AWD) and fuel economy stands at 24 city, 31 highway for the FWD version and 22 city, 29 highway for AWD-equipped models. 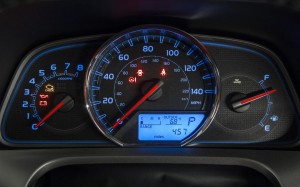 But neither of these two are exceptionally better in either respect – especially when cross-compared on a price-equivalent basis and with their standard engines.

Dead heat with the RAV.

The Escape’s standard 2.5 liter, 168 hp four (the one four of the three fours Ford offers in this vehicle that isn’t turbocharged) is actually less powerful than the RAV’s four – and so equipped, the Ford is slower to 60 and no more fuel efficient (22 city, 31 highway). Buyers should also be aware that Ford only sells the base S version of the Escape with the 2.5 liter engine in FWD form. If you want AWD, you have to buy the extra-cost engine first – and then buy the AWD in addition to that. 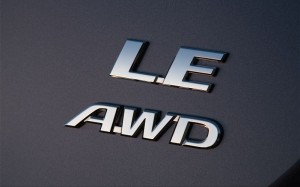 AWD-equipped RAVs feature a driver-selectable lock function (button to the left of the steering wheel) which – when engaged – sends more power to the rear wheels, to give more traction in snow and mud.

The six-speed automatic also has driver-selectable modes, Eco and Sport. The chief noticeable difference between the two is that in Sport mode, overdrive is locked out and – as a result – the engine spins at higher RPMs and feels/sounds a bit more aggressive.

Several competitors – including (if the leaks are accurate) the ’15 CR-V – have gone over to Continuously Variable (CVT) transmissions. Or – as in the case of the Jeep Cherokee – have gone with more than six-speed conventional automatics (the Jeep comes with a nine-speed transmission).

The RAV could probably benefit from a CVT – or a more than six-speed automatic. Toyota has been a little behind the curve as far as getting the latest n’ greatest onto the market, transmission-wise. But, there’s nothing wrong with the RAV’s box. A CVT or seven-speed might notch the mileage up a little. But it’s not a big deal.

Much less a deal-breaker. 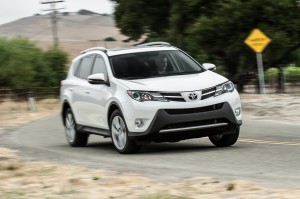 The RAV’s understated goodness grows on you the longer you drive it.

The seats are exceptionally comfortable – pillowy and just firm enough at the same time, such that your back- and butt – still feel good even after a five hour non-stop highway haul (I did two such hauls in the same day, up to DC and back from our place in The Woods of rural SW Virginia). All too many modern car seats are overly firm – done in the name of “sportiness.” The RAV’s are soft, but not too soft. They are just firm enough in the right way – and in the right places.

Further enhancing the relaxing/de-stressing vibe of this car are controls that aren’t trying to be clever – they just work. Easily. And can be understood – immediately. Want to lower (or raise) the temperature? Rotate the large knob on the cleverly designed “shelf” above the center console to the left – or right. Turn the radio on? Push the button, then turn the knob to increase or decrease the volume. There are redundant/secondary volume controls on the steering wheel, too.

Change the station? Turn another knob, to the left for down – to the right for up. 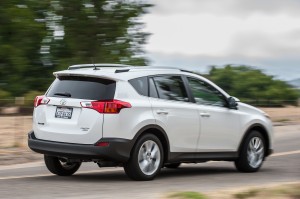 Last week, I reviewed the 2015 Cadillac Escalade. It had a bridge like the Battlestar Galactica, with flat screens and pretty lights abounding. But changing radio stations – or even adjusting the volume – was often a two steps forward, one step back process that got old  and aggravating long before my weeklong test drive was over. Is the object of the exercise to try to dazzle you with what is technologically possible?

Or is it to turn the radio on?

Drivetrain-wise, we are dealing with a steady Freddy. A simple, effective tool for the task at hand. The 2.5 liter engine will not rock your world, but it will get you where you’re going – and probably will do that for a long time without asking for much from you except occasional oil and filter changes. There is no rush of turbocharged acceleration, true enough – but there will also be no palpitations that attend $4k repair bills for a new turbo eight or so years down the road, either. 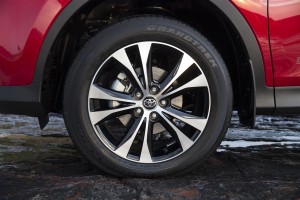 Even the shoes are sensible. Seventeen-inchers are standard, shod with long-lived, easy-riding all-season tires. The Limited comes with larger 18-inch wheels, but the tires are still gentle all-seasons, not performance-compound (and harsh riding) “sport” tires with short sidewalls and a commensurately short life.

The RAV is soft-riding, complementing its seats. If pushed, it will slide – but always gently, never abruptly. An autocrosser, it’s not. But who cares?

It does have a much tighter turning radius than all its rivals: 34.7 feet vs. 37.6 feet for the Jeep, and 37 feet for the Escape and 2014 CR-V. It’s not something you notice looking at these cars on the dealer’s lot. If anything, you’d suspect the rakish-looking Jeep and Ford to have tighter turning circles. But, they don’t. And you’ll discover the difference living with these crossovers rather than looking at them. 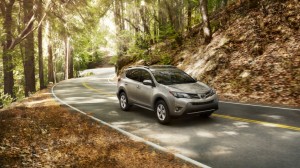 The RAV is like the girl you (hopefully) marry. She may not be as flashy as some of the girls you’ve dated. Might not make your pulse jump just to look at her. But she’s the one for the long haul, because you never get sick of having her around, because she’s pleasant and helpful, doesn’t let you down – and isn’t high-maintenance. 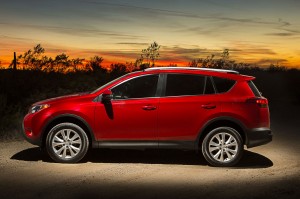 The RAV’s styling is vanilla – and while many people prefer rocky road or black raspberry swirl, few people hate vanilla.

Another reason for the RAV4’s success.

For it to fail, Toyota would need to make the mistake of giving buyers already Toyota-inclined a reason not to like the RAV. And that’s a mistake Toyota hasn’t made. 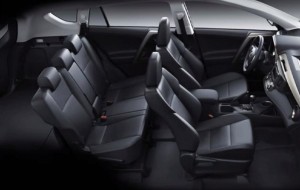 Footprint-wise, the RAV is slightly larger than the current (2014) Honda CR-V and Escape (just barely) but smaller than the Jeep Cherokee. It has 42.6 inches of front seat legroom – more than all but the Ford Escape, which leads the segment with 43.1 inches of front seat legroom. Second row legroom is a similar story. The Toyota’s 37.2 inches is a bit more than the Escape’s (36.8 inches) but not quite as much as ther CR-V’s ((38.3 inches). On this count, the Jeep leads the pack with 40.3 inches.

The relevant point here, as regards the RAV, is that it’s not seriously deficient in either row relative to any of its rivals. No reason to complain. 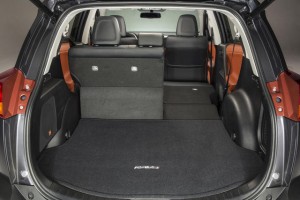 Pop the hatchback and you’ll find 38.4 cubic feet of cargo capacity with the second row setbacks up. Lay them flat and the total real estate expands to 73.4 cubic feet. This is slightly more cargo capacity than the current CR-V (37.2 and 70.9 cubes, respectively), a bit more more than the Escape (34.3 and 68.1 cubes) and – surprise, surprise – a lot more than the larger-on-the-outside Cherokee, which has a fairly paltry 24.8 cubic feet of cargo space behind its second row and just 54.9 cubes when they’re folded flat.

Limited models come with a power liftgate, but the non-powered gate is easy to deal with because the RAV is not overly tall – and the load floor is pretty low to the ground. Heated front seats are standard on LImiteds and you can order an 11-speaker JBL audio rig – bundled with GPS. 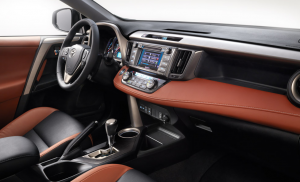 Toyota’s Entune suit of apps is included with all trims, but XLE and Limited trims get an enhanced version with Bing, Pandora streaming radio and traffic/sports/stock updates. The system connects wirelessly to your cell phone.

All trims get an LCD touchscreen monitor for the center stack.

There is a lot of elbow room under the hood – and Toyota has packaged the RAV’s engine to be very DIY-friendly. For example, the battery is not located partially under sheetmetal or bracing. It is “right there” – and easily removed/replaced. The air box – which houses the air filter – has a top held in place by two snaps. No tools needed to change the air filter. The serpentine belt that drives the accessories is also accessible, so it’ll be easy to change when the time comes. 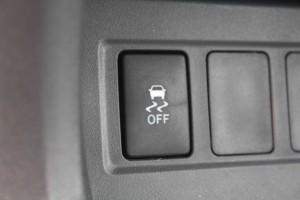 One of the very few things I personally didn’t like about the RAV is something I personally don’t like about all current Toyota vehicles: You cannot turn the traction control off without first coming to a complete stop. Yes, there’s an “off” button – and yes, you can push it. But if the vehicle is moving, the traction control adamantly stays on – for “safety,” you know. Why is this objectionable – leaving aside the juvenile urge of a middle-aged car jockey to spin the tires? One word:

You want it in winter. And sometimes, to maintain it, you need to keep the hammer down even if the car is fishtailing (and the tires spinning). But with traction control, the power cuts cut, the ABS pumps – and you get slowed down. Sometimes, you get stuck. It does no good to turn off the traction control once you’re stopped on an ice-slicked grade. Good luck to ya. 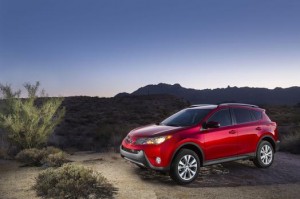 Whenever I – the guy who is driving and who signed the check – want it off.

Beyond this little gripe, I dig this unit.

Boring might not be dancing-in-the-streets fun, but it’s sometimes just what you want.