The Ford Escape has been around for 20 years – and while a lot has changed during those years, a lot has stayed the same, too.

The difference – and commonalities – are an interesting commentary on the changes in the car business, generally.

The Escape is a compact-sized crossover SUV – just as it was back in 2000, when the first Escape made its debut. It still seats up to five people in two rows, comes in both front-drive and all-wheel-drive iterations and offers your pick of three different drivetrains – the same as it did 20 years ago. 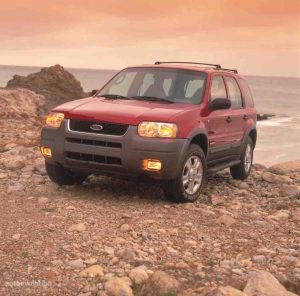 But the drivetrains are very different today – and the new Escape offers features that you only saw in the sci-fi series like Star Trek: The Next Generation back in 2000.

Prices start at $24,885 for the front-wheel-drive S trim, which comes standard with a 1.5 liter three cylinder engine. 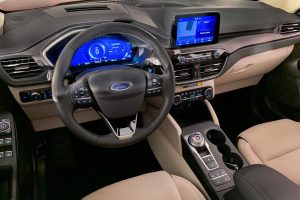 And if you want something really different, there’s a hybrid version – also with (or without) all-wheel-drive. This one delivers three times the mileage the old Escape did. It can also go three times as far as the old V6 Escape could – if you can select a plug-in option that gives you almost 600 miles of highway range on a full tank (and a full charge).

Without having to stop to recharge.

A top-of-the-line AWD-equipped Titanium trim with the plug-in hybrid drivetrain stickers for $34,900.

The 2020 Escape is a wheels-up redesign; the wheels are new, too. 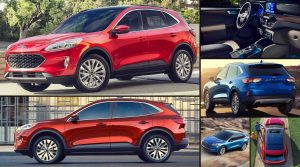 Unlike many in this class – which offer a standard and optional engine – the Escape is available with three different engines – and two different transmissions. 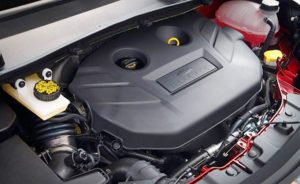 And the optional 2.5 liter gas-hybrid combo makes as much – or more – power than the old V6 (198 or 209, depending on whether you go closed-circuit or plug-in) while going three times as far on a gallon of gas. 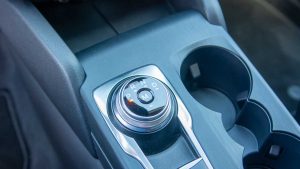 The original Escape’s 3.0 liter V6 – which made 200 hp – drank so much gas (16 city, 22 highway) that it almost needed to pull a tanker behind it. The new Escape hybrid drinks so little (44 city, 37 highway) you might only need to stop for gas a couple of times a month.

And it doesn’t make you wait.

The hybrid layout frees you from having to plan your day around recharging – where to do it and how much time it’ll take. The regular hybrid just drives – like any other car. 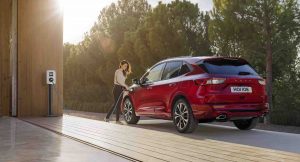 When you run low – on gas – you stop (briefly) and fuel up. Back on the road in five minutes or so. The gas engine recharges the battery for the electric side of the hybrid system as you drive.

The plug-in goes both ways. You can just gas and go. Or – when you have time – plug it in and wait for the battery to charge up without using the gas engine as a generator. Then use “EV” mode to drive without burning any gas – or worrying about running out of charge.

You pull up to 3,500 lbs. with an Escape – par for the class. But the maximum tow rating varies according to the drivetrain you select – and in ways you might not expect. 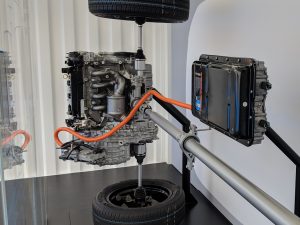 The base Escape with the 1.5 liter engine is rated to pull 2,000 lbs. but the more powerful hybrid can only tug along 1,500 lbs. The lower capacity is due to the fact that the hybrid is already lugging around more weight before you hook anything up to its rear end. 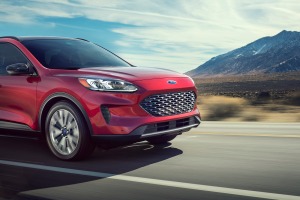 No matter which engine you pick, the Escape isn’t slow – unlike the original, which was borderline dangerously slow with its standard 130 hp engine.

Your choice is between quick – and quicker.

The drive also lasts longer because you don’t need to stop as often. The original with the V6 was decently quick but haltingly consumptive. It averaged maybe 14 MPG, which meant its 15 gallon tank could be emptied in as little as 210 miles.

A new Dodge Hellcat goes farther on a tankful. 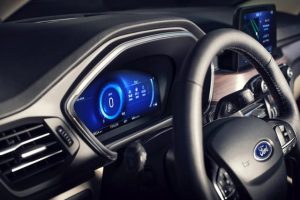 The hybrid goes almost as far as a diesel – which Ford used to offer in the European version of the last-generation Escape (called Kuga in Europe) but never brought to the United States  – and never will, because of the anathematization of diesel engines – which are too efficient/affordable/practical and so make electric cars look stupid.

The next best thing is the hybrid, which not only approximates the range of a diesel but also the torque – one of the good things about electric motors. Ford knows that while gas is cheap, gas mileage isn’t the sell it used to be. So while the hybrid Escape is very fuel sippy it is also very peppy. Like a diesel-powered car, it jumps forward when asked to – and without having to rev it. 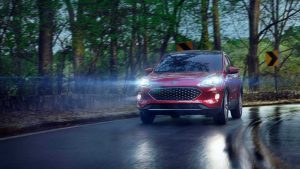 It’s arguably better than a diesel – at least, a modern, government-crippled diesel – because you don’t have to feed the hybrid DEF (diesel exhaust fluid) or deal with purging particulate traps or pay 40 cents extra per gallon for fuel.

Speaking of which – all the Escape’s engines are regular (87 octane) unleaded engines. So you don’t have to pay 20 cents extra per gallon for high-octane premium unleaded.

An interesting – and useful – feature of AWD-equipped Escapes is that they can run with the AWD off when the extra grip of four powered wheels isn’t needed and powering all four wheels would be wasteful.

You save gas – and wear and tear.

Which is also saved by one of the deepest overdrive ratios you’ll find in any new car – .62 in eighth, which lets the Escape sail at highway speeds with the engine almost off.

But the drive is a bit less fun than it was back in the day – because you can’t shift for yourself, no matter which engine you pick. The original Escape was available with a five-speed manual transmission. The 2020 comes standard with an eight-speed automatic – which many people will be happy about because so many crossovers come only with a continuously variable automatic – and many people dislike the “shiftless” operating characteristics of CVTs. 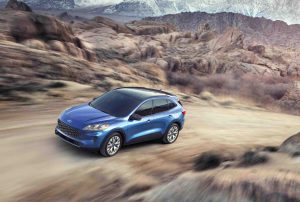 It shifts snappily – and more efficiently – than a human-shifted manual, which is why Ford (and most car makers) rarely offer manuals anymore – in anything.

But there’s something to be said for shifting for yourself, even if it does cost a couple of MPGs.

And if you do prefer a CVT, no worries. The hybrid version has one. And it’s not noisy. Or even very different, in terms of how it feels. The non-hybrid’s eight-speed goes through gears, but the gear changes are subtle and unless you’re watching the tach and noting the RPM changes as the transmission shifts through its gears, you’ll probably have a hard time telling the difference. 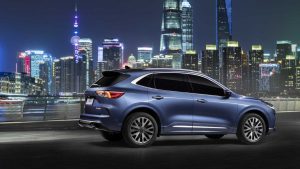 The original Escape looked like a truck-based SUV. It was boxy – which had the upside of making it roomy.

Just like an SUV – but without actually being an SUV. The whole point was to give people who wanted or needed more than a car the option to buy a vehicle that still drove (and rode) like a car. . . not like a truck-based SUV.

This is one of the reasons for the popularity of crossovers.

The new Escape isn’t boxy – and it’s roomier. In part because of the flexibility of its fore-aft sliding second row. Pull them forward – and lay them flat – and the Escape has 65.4 cubic feet of cargo room.

Or 40.7 inches of backseat legroom – exceptionally roomy for this class. 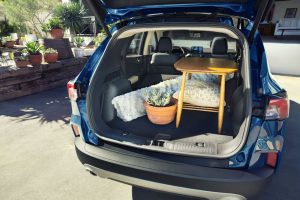 The Escape is after all only 180.5 inches long, bumper to bumper – which is about a foot shorter overall than a current mid-sized sedan such as a Toyota Camry, which  is 192.7 inches bumper-to-bumper and only has 38 inches of backseat legroom.

And just 15.2 cubic feet of cargo capacity in its trunk – about a fourth of the capacity for cargo that the Escape offers.

Another reason for the popularity of crossovers – and the declining popularity of mid-sized sedans like the Camry and Accord and the rest of them. Several of them (Chevy Cruze and Malibu, Ford Taurus and Fusion) have been cancelled for lack of popularity. 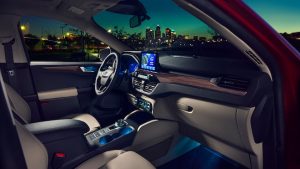 Ford has also added previously Lincoln-only features such as an external keypad entry system and an available 10-speaker Bang and Olufsen ultra-premium audio system. Also futuristic features, such as the available 12.3 inch flat-screen main gauge cluster (hybrid versions come standard with this) and a heads-up display (HUD) which projects pertinent information such as the speed you’re doing holographically, in your line of sight.

It’s pretty remarkable to find features like this in an Escape – which is a very bread-and-butter/middle-of-the-road kind of car. 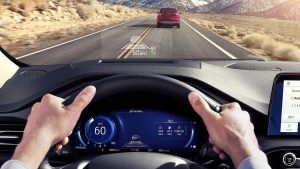 Back in 2000, the only thing that had a touchscreen was the starship Enterprise – which wasn’t real.

As recently as five or six years ago, the only cars that had them were very expensive real  things – like the Mercedes S-Class.

This tech – as well as used-to-be luxuries such as climate control AC, very good audio systems (not merely stereos) are now almost givens in everyday cars like the Escape. This is nice – in that almost everyone can experience things which until quite recently only the very rich could experience. But it also generalizes specialness, which induces a kind of jaded ennui when it comes to new cars. 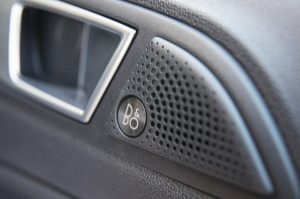 I think part of the explanation for the public fascination with EVs is that they’re the first really different thing to come down the line in years – and that this specialness also accounts for the general cognitive dissonance about the EV’s many functional and practical and economic deficits.

Given how inexpensive gas is, it’s hard to justify the Escape hybrid’s price . . . if you go solely by MPGs. But when you factor in the range – twice that of any electric car – with the performance and the convenience of not having to stop to recharge, the thing makes a different kind of sense.

There is one downside, however.

Or rather, a weird side. The hybrid isn’t silent anymore. For saaaaaaaaaafety – and because it’s now The Law – a weird noise is emitted by the Escape hybrid (and all 2020 hybrids) whenever you put it in Reverse. So that sail-fawn-addled pedestrians will hear you backing up and not be pizza-pied by the Escape.

It sounds like bad wheel bearings but it’s nothing to worry about. It’s supposed to sound like that.

Probably, there’s a hack somewhere that can be performed to shut this off. 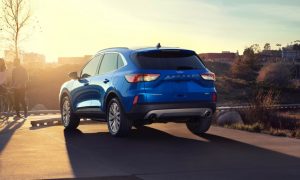 Same goes for ASS – the automated stop/start “technology” which all versions of the Escape unfortunately come standard with. There’s no obvious ASS-off button, either – as seems to be the new trend with ASS-equipped new cars.

Which is almost all new cars.

It’s one thing that’s changed which may of us wish hadn’t.

Back in 2000, a crossover was something different. The 2020 Escape still is in some important ways – and the same in other ways, too.

And that’s also a good thing!

What About The Children?