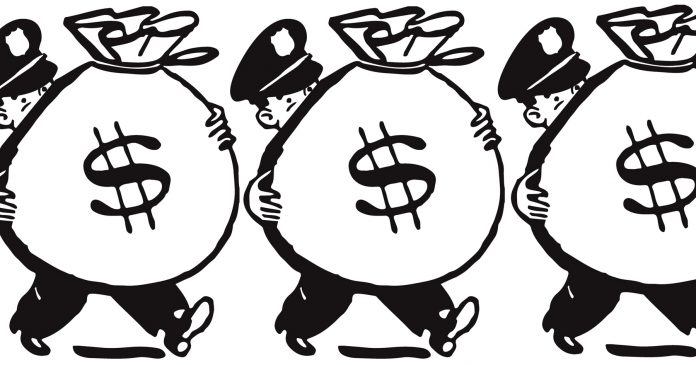 It’s not illegal (yet) to carry cash – in any amount – so how is it that armed government workers have acquired the power to simply steal it?

And why aren’t Americans in the streets over this?

The theft – there’s no sugar-coating it – is performed in almost exactly the same manner as an ordinary street mugging, with this one critical difference: The victim is legally forbidden the right to defend himself. 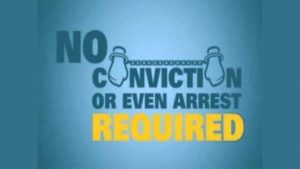 An armed government worker approaches and uses the implied threat of lethal violence to corner his victim. Perhaps – but not necessarily – on the pretext that some statute or other has been transgressed. An out-of-date inspection sticker. “Speeding.” It can be almost anything – or nothing.

The approach is mere formality; of the same species as the thug in an alley asking his soon-to-be-victim whether he’s got a cigarette he can “borrow.”

It is not uncommon for armed government workers to “detain” people who’ve committed no violation of any statute nor given any tangible lawful reason to suspect they may have. It is enough, nowadays, for an armed government worker to claim that “someone called” – and even that excuse is not necessary, as a practical matter. 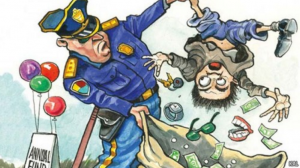 So, you have been “detained” or “pulled over” or perhaps forced to stop your car for a random inspection by armed government workers at a “checkpoint.”

You are carrying a cash – perhaps more cash than can comfortably fit in your wallet. So you have it in an envelope in the glovebox or in a bag on the seat beside you or in a backpack, or whatever. But it’s simply cash – and regardless of the amount, it’s not illegal to carry cash.

As if that mattered.

The ugly fact is that cash in any amount is subject to “civil forfeiture” – the euphemism used by the armed government workers who perform this legalized theft.

The claim used to justify the forfeiture is that mere possession of cash – especially “excessive” amounts of cash, but not necessarily – is inherently “suspicious.”

Not of anything specifically. It is just “suspicious” to be carrying cash.

And the exact amount which is “suspicious” – vs. not  – has never been defined in law. It is defined in practice according to the whim of armed government workers. 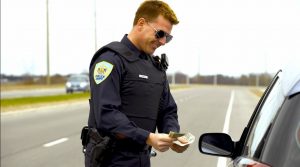 Which means it can be any amount at all.

Usually, it is large amounts which are deemed “suspicious” by armed government workers, but because there is no particular standard, the potential victims of this business cannot know in advance how much cash, exactly, is “suspicious” and thus avoid carrying it, as a precaution to avoid forfeiture.

It is a measure of tyranny when the law is whatever the enforcers of law say it is, according to their whim. And in the United States, today, an armed government worker has merely to declare that he regards the amount of cash he finds in your possession to be “suspicious” or “excessive” and – presto! – it is no longer in your possession.

It is now in his possession.

The pretext given is that  the cash is presumptive evidence of illegal activity.

Generally, this is taken to mean (arbitrarily) illegal drug activity. But that doesn’t really matter since it is not necessary to even charge the victim with a drug or any other offense – not even jaywalking –  much less convict him of an offense, before his money is “forfeit.”

The mere presumption of illegal activity is sufficient.

Let that sink in.

No charge, no trial. No conviction. Just “forfeiture.” On the basis of a presumption that you have done something illegal. Despite your not having been adjudicated guilty of anything.

And the attorney general of the United States endorses this business. “I love that program,” exults Jeff Sessions. “We had so much fun taking drug dealers’ money . . . what’s wrong with that?”

Sessions presumably went to law school. He therefore ought to know that asserting someone is a “drug dealer” (or a “drunk” or a “terrorist”) isn’t the same thing as having proven it. And that – in civilized societies – establishing guilt generally precedes punishment.

And the really Kafkesque thing is that attempting to hide cash from these lawless predators – in a secret compartment, for example – is itself a separate crime! Even if you haven’t got any cash (or arbitrarily illegal drugs) or any other illegal thing, your vehicle is potentially “forfeit” in the event such a compartment is discovered.

In other words, you are not allowed to hide money – or even your sunglasses – from thieves.

That line is taken from the 1972 film, Deliverance. It is spoken by the deranged backwoodsman who eventually sodomizes Ned Beatty’s character.

What’s happening on the roads of America is hardly much different.