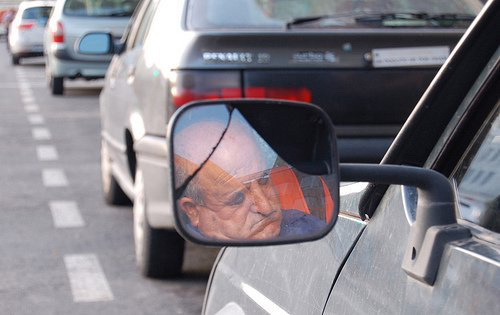 People aren’t asleep at the wheel – they are unconscious behind the wheel. The Safety Cult has done its vile work, turned most people into narcoleptics who operate in ultra slow-motion –  like watching the Zapruder film frame-by-frame.

The light goes green – and nothing happens.

After awhile, they notice – and the herd creeps forward. Herd is exactly the right word, too. A herd moves as one. So do most drivers. The car in the left lane keeps pace with the car to its right. The car in the left does not move any faster – or move over to the right. This would open up the left lane – formerly known as the fast or passing lane – so that traffic could un-glut and people could get going rather than mooing along in vacuous, gadget-addled unison. 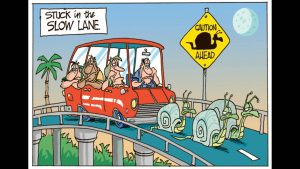 When they do move over, they almost never just do it. First, they wait for cars behind them to accumulate. So that those cars are forced to brake and slow down. After another while, they signal that they are thinking about a lane change. But not yet! After some more while, they gradually begin to drift over to the adjacent lane.

The process often takes several minutes. You can almost feel your beard growing.

It is as rare as sound money for a driver to neatly, cleanly move over to the right lane in anticipation of faster traffic coming up behind him (having noticed it coming up behind him because he is scanning his rearview) such that the faster-moving traffic isn’t forced to brake, slow and wait.

Anything quickly and efficiently done in a car is now considered “unsafe.” Hypercaution is the watchword. 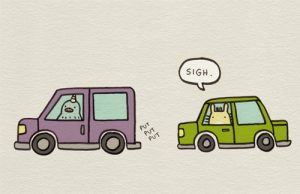 This includes even slowing down itself.

As cars approach a red light, they taper to a crawl and then inch forward – leaving enormous gaps between them and the cars ahead. This effectively doubles the number of cars occupying a given space, due to the multiplication effect of the Ghost Cars in between the actual ones.

The conga line grows even longer than it has to – and you wait longer to access left and right turn lanes, which are routinely blocked by three or four cars taking up as much physical space as six or seven because of the great Air Gaps in between them.

Few will ever inch forward, even a little – so as to close the gap and make it feasible for you to access that oh-so-close (but so far away) turn lane. Even when they see you would like to squeeze past and maybe catch that left or right turn signal. 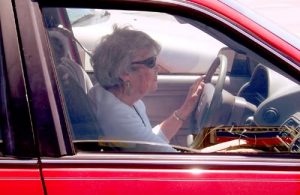 They are either grossly uncivil, indifferent to the inconvenience – or they are incapable of closing the gap due to a stunted sense of spatial relationships.

On the one hand, people’s sense of their car in relation to other cars – and the physical environment – has been badly gimped by lack of development in the first place (new drivers are no longer taught/expected to become proficient at such things as parallel parking; the cars now park themselves) and by cars designed such that outward visibility has been badly gimped.

People are afraid to pull forward out of fear they might bump into something.

They are also afraid to pass anything. 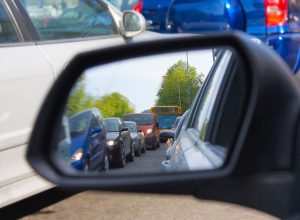 Even in a legal passing zone. Multiple cars will back up behind one car whose driver won’t quite do the speed limit. But as frustrated as everyone obviously is, none will pass.

Because that would require speed in excess of the posted limit – even if briefly – in order to execute the pass (cue irony) safely.

But people are terrified of receiving a ticket for speeding.

This is is reasonable. Armed government workers have always been among us, but they didn’t used to be the mortal threat to us which they are now. Even if we’re not Tazed or otherwise physically brutalized, the fines are brutal. OJ can get away with killing people and not paying his victims’ families – but if you are caught “speeding,” you’ll pay.

And so, people are fearful of doing anything which might lead to an encounter with Officer No Longer Friendly. 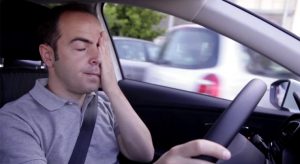 This has led to a weird situation: Powerful cars in abundance – a family sedan such as a new Accord or Camry is quicker than most V8 muscle cars of the ’60s and faster on top than most Ferraris of the ’70s – whose power is generally wasted. It’s like a celibate supermodel.

This, more than anything else, probably explains the general enthusiasm for the automated car. It will be possible to actually go to sleep behind the wheel – once there’s no longer a wheel to worry about.