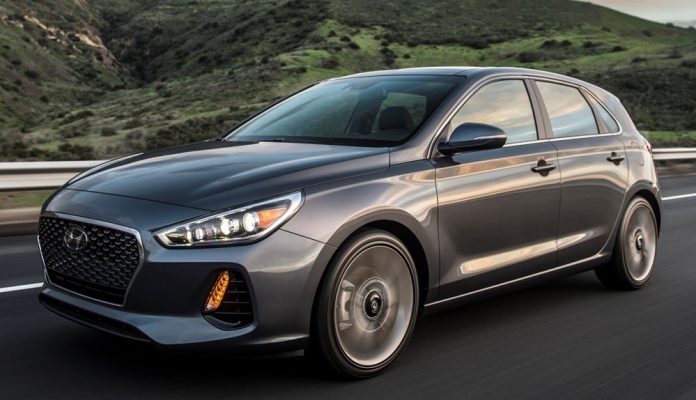 It’s not hard to understand why sedans aren’t selling. They are too small. Even a full-size sedan hasn’t got much trunk. And what trunk it’s got is isolated from the rest of the car. Sometimes, there’s a pass-through, but it’s usually a small rectangular hole through which maybe you can poke one long and thin item – like a set of ski poles – through to the passenger compartment. But you’ll never get as much big stuff in the trunk as you could in a hatchback’s  . . . back. 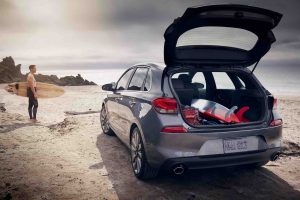 Access is wide-open, through the rear liftgate – and the entire space opens continuously into the passenger compartment. You can fold the rear seats flat and now you have easily three times the cargo room as a same-sized sedan.

Which is one of the reasons why hatchbacks like the new Elantra GT are selling – while sedans are having a tougher time finding homes. 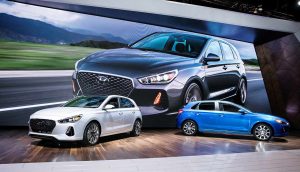 The Elantra GT isn’t just a hatchback’d version of the compact-sized  Elantra sedan. It’s actually a different model that uses the same name. It has a shorter wheelbase – and is a full nine inches shorter overall – but (being a hatchback vs. a sedan) the GT has 55.1 cubic feet of total cargo capacity vs. 14.4 cubic feet for the Elantra sedan’s trunk.

Hyundai brought it over from Europe to counter competitor hatchbacks like the Mazda3 and VW Golf, among others.

There are some similarities, including shared engines – but the two Elantras are more like cousins than brothers.

Base price for the GT with the standard 2.0 liter engine and a six-speed manual transmission is $19,350. The Elantra sedan with the same drivetrain – but much less interior space – is considerably less expensive: $16,950 to start.

The GT Sport bumps you up to a turbocharged 1.6 liter engine, available with a six-speed manual for $23,250 to start and $24,350 with the optionally available seven-speed automated manual transmission. 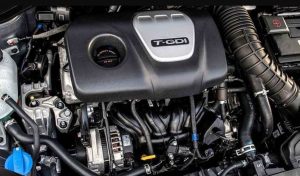 Hyundai began selling this version of the Elantra in Europe – as the i30 – and is now selling it here as the Elantra GT. 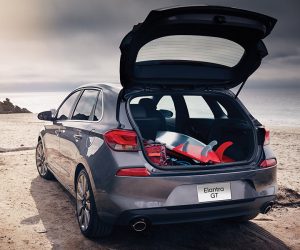 Much more room inside than inside the sedan (and vs. rival hatchbacks, too).

Manual transmission available with both engines – not just the base (and less powerful)  engine.

Available with a hot engine. Some rivals only offer just one (not-very-hot) engine.

Lose a little backseat legroom vs. the sedan. 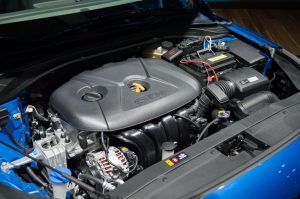 The GT’s standard engine is the same engine that’s standard in the Elantra sedan. It’s a 2.0 liter turbo four – no turbo – making 161 hp and paired with either a six-speed manual or a six-speed automatic transmission.

So equipped, this one will get you to 60 in just over 7 seconds and rates an EPA-estimated 23 city, 31 highway.

These figures stack up favorably/comparably to those of other small hatches like the Mazda3 and VW Golf. 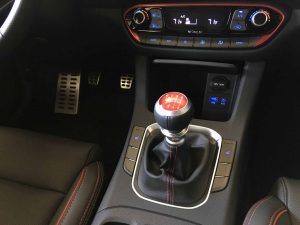 Next up – standard in the GT Sport – is the same turbocharged 1.6 liter engine that’s also optional in the sedan. It ups the ante to 201 hp – more horsepower than the Mazda3’s hatch’s optional 2.5 liter engine (184 hp) and the VW Golf’s standard (and only) 1.8 liter, 170 hp engine – and you can go with either a six-speed manual or a seven-speed automated manual.

This is a major hardware upgrade for the class. Automated manuals shift extremely quickly and – unlike a conventional automatic – they cost you less horsepower (and so, acceleration) with the side benefit of boosting fuel economy. More on that in a moment.

Th Elantra GT Sport gets to 60 in a speedy six seconds or so.

And it gets you there using less fuel. EPA says 26 city, 32 highway with the seven-speed automated manual. 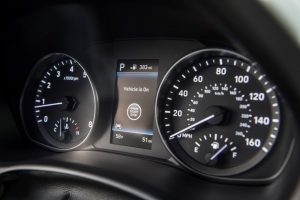 That’s having your turbo-boosted performance cake and eating it, too! 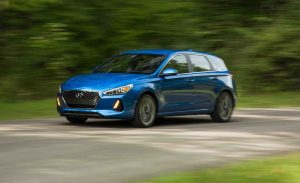 Most of the fun driving is at this end of the market now.

Fun, in the first place, because cars like the Elantra GT are still affordable, so you can get into one before you’re old and care more about soft seats than speed shifts.

It – and cars like it – have assumed the Youth Market role that V8 muscle cars one held, a long time ago – when people just out of high school were able to afford driving them.

They can no longer afford them. 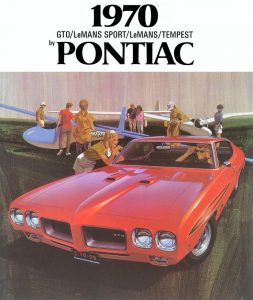 But the Elantra GT – even the turbocharged GT Sport – they can afford. And the concept is similar, too. People forget that the first muscle cars began as economy cars that were made into fun cars by hotting them up under the hood, adding complementary heavy-duty suspensions, decorating them with colorful paint jobs and so on – but keeping the price manageable.

Sure, the Elantra is front wheel drive and it’s powered by a four cylinder engine. What could that possibly have in common with a rear-drive and V8 powered muscle car?

Well, for one, they’re side-by-side 0-60 and at the end of the quarter mile. Not many classic-era V8 muscle cars were quicker than the Elantra GT – and the turbocharged GT Sport is quicker than almost all of them. The way the power flows is different, but the end result is very similar. 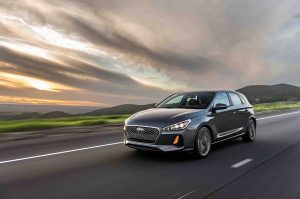 You can squeal tires, for instance. Not the rear tires – but the fun is still there, just differently oriented. And the turbo’d GT Sport can squeal tires while rolling, too – a trick only the very strongest classic-era muscle cars could pull off. They had torque – the Hyundai has boost.

The effect is the same.

Manual or automatic, the tires will slip and skitter like a spring rabbit if you hammer the accelerator of the turbo GT Sport from about 10 MPH and keep your foot in it. And just like a muscle car on the edge of traction, you can modulate slippage via your right foot. Back off just enough to let the tires bite, but leave some rubber in your wake.

You can chirp the tires on the 1-2 upshift in the regular Elantra, too – because you can shift for yourself. It is becoming almost impossible to find a sedan that’s available with a manual transmission. Hyundai offers that in both versions of this thing. 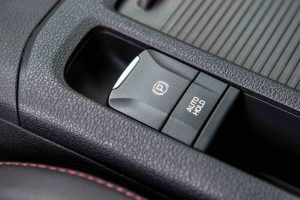 The one thing that’s missing from this thing is a manual (pull-up) emergency brake. Instead, there’s a button on the center console which you press to engage the parking brake. This is being done across the industry – mainly for “packaging” reasons. It’s simpler to assemble cars this way, using plug-in modules rather than having to run and manually adjust a cable.

But you can’t make 90 degree turns with an electric parking brake. This car ought to have a pull-up emergency brake lever for exactly that reason. 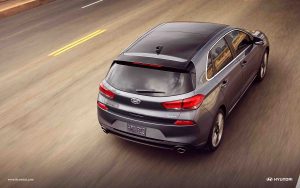 Both the GT and the GT Sport do come through with pretty stout final drives – 4.33 for the GT and 4.46 for the turbo. That’s stouter than the 3.90-4:11 rear gears the most aggressive muscle car had – and it explains why these cars jump when you ask them to – just like the old muscle cars.

But unlike the old muscle cars – which didn’t have overdrive gearing in their transmissions – the Hyundai can cruise at 80 without the engine screaming at two-thirds redline.

It’s also why these cars are faster on top than almost every classic muscle car. They’ll each do 130-plus. Only a few of the old maulers could hit that speed before hitting redline – they were mechanically limited to speeds below what most economy cars can easily hit today. 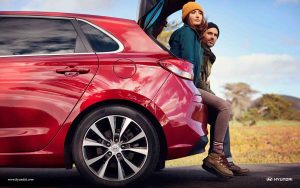 Hyundai has managed to out-package VW.

The Golf was the most space-efficient hatch in this class. It’s still the shortest overall – just 167.5 inches bumper-to-bumper vs. 170.9 inches for the Elantra GT – but the Hyundai has more room inside.

And that’s no small thing. 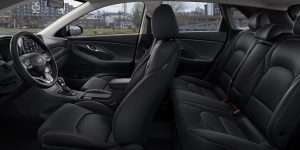 But it’s no longer king.

The very pretty Mazda3 hatchback is less cargo-capacious than either. It has 20.2 cubic feet behind its second row, maxing out to 47.1 cubic feet with the second row folded. That long, sexy nose is to blame.

Not having those additional inches can make all the difference when you’re trying to park curbside.The GT gives you more wiggle room – without giving up inside room.

The hatch does have slightly less backseat legroom – 34.8 inches vs. 35.7 inches in the sedan – but it’s not a deal-breaker. 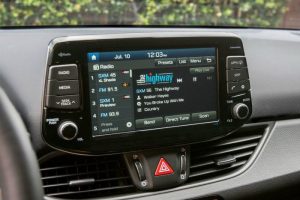 The GT has its own specific interior layout – including a standard 8-inch, iPad-style touchscreen that free-stands on top of the center stack. The Elantra sedan’s is smaller – and mounted lower – in the  center stack. GT Sports get a larger (4.2 inch) main gauge cluster (a 3.5 inch display is standard in the regular GT.

It might take you a minute or several to figure out where the lock/unlock button is. The GT has just one button, mounted on the center stack (most cars have a button on each door panel). But there are also buttons on each exterior door pull. If you have your fob in your pocket, pushing the button will unlock the doors that way, too. 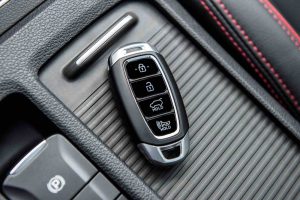 You can start the GT remotely – but differently. Instead of using the key fob or even your smartphone, just ask Alexa. Hyundai has set the car up so you can communicate with it that way. And not just turn the engine on if it’s cold or hot outside. But when the outside temperature reaches whatever temperature you decide. It’ll kick on – and cool off (or heat up) automatically. 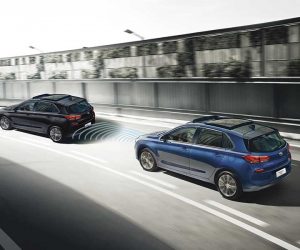 You can get a full-auto Smart Cruise Control system in the GT Sport that is capable of bringing the car to a complete stop – if traffic ahead of you stops – and then accelerating the car just as automatically when traffic starts moving again. This can be helpful in the tedium of stop-and-go traffic – but on the other hand, it also arguably encourages people to space out behind the wheel. Until the fully automated car is perfected – here’s to hoping that never happens – it might be better if the driver remained obliged to apply the brakes and gas as necessary.

Another feature which Hyundai offers in both the GT and the GT Sport is the option to buy a premium Infinity Clari-Fi audio rig, which in addition to sounding great also has a playback function (for the satellite radio) so you can go back and re-hear something you really liked – or something you just missed. 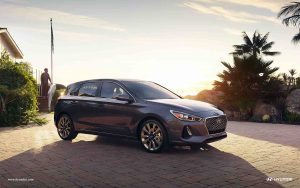 And in other ways, it’s even better.

The GTO, after all, could not haul a ‘fridge home from Lowes. You couldn’t sleep in it (not lying down) and it absolutely did not average close to 30 MPG  – as my test car did during the week I ran around in it.

Seems like a not bad latter-day interpretation of a once-winning recipe.