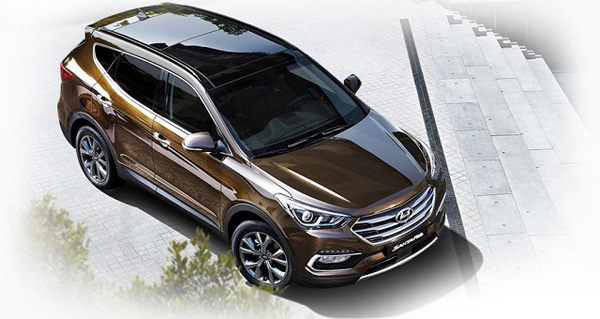 Unlike other crossover SUVs, the Hyundai Sante Fe comes more than one way.

It also comes with more than one engine – your pic of three. Two fours, one of them with a turbocharger – the other without.

And Hyundai lets you have the hot engine – the turbocharged engine – without AWD. Unless that’s what you want. In which case, you can buy it that way, too.

Once again, your pick.

A crossover for every condition – and inclination –  just about.

Which is pretty cool because it’s not more of the same.

The SF Sport and SF regular are Hyundai’s compact and medium-sized crossover SUV.

The Sport version is shorter – Honda CR-V/Toyota RAV4-sized – and (like them) comes with two rows of seats and room for five. Unlike them, it’s also available with a punchy (240 hp) turbocharged four cylinder engine.

Or, you can buy the longer wheelbase – and three row – regular Sante Fe.

It has room for seven – and comes standard with a 3.3 liter V6. It’s among a dwindling number of crossovers that even offer more than just a four. 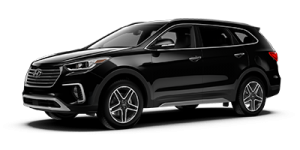 The Sport’s prices start at $24,950 for the base FWD trim, which can be upgraded to AWD for $26,500 – and without having to upgrade to the more expensive turbocharged engine as a condition.

If you want the additional power, that turbocharged engine is available – with prices starting at $31,500 for the FWD version and $32,900 with AWD.

Yes, you read that right. You can get the turbo’d engine without AWD . . . if you’re one of the brethren who likes to light ’em up.

In this case, you can choose to hoon.

$37,200 for the Ultimate trim, with everything Hyundai can screw into and onto the thing.

If you need more room – and want more cylinders – the regular SF is available for $30,850 to start for the base FWD version. Adding the optional AWD bumps the price up to $32,600.

A top-of-the-line Ultimate with AWD and everything Hyunda can screw into and onto the thing stickers for $41,300. 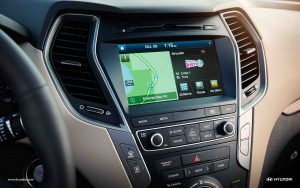 2018 is a carryover year for the Sante Fe – meaning, no major functional or cosmetic changes vs. last year – when both Sante Fes got a number of tech and cosmetic updates, including two new LCD touchscreens for the infotainment system and GPS (five inches standard in the Sport; eight inches optional/standard in the long wheelbase SF) and a slew of new apps, including Android auto.

But there is a price change.

No upselling you an engine to get AWD.

Long wheelbase Sante Fe is not as long as other three-row crossovers like the Mazda CX-9 and Chevy Traverse, so it’s easier to maneuver and takes up less space in the garage. But it’s still very spacious inside – with class-best second row legroom and significantly more total cargo room than several larger crossovers such as the pretty but not as space-efficient Mazda CX-9.

And has more interior room than most of them, too.

Door pulls are too far back – it can be awkward to reach them when the doors are all the way open.

Toyota Highlander has a much roomier first row, more cargo space and is slightly smaller on the outside than the long-wheelbase SF. 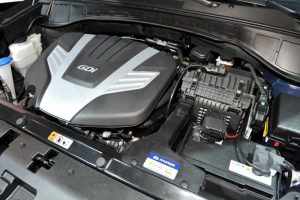 One of the Sante Fe’s biggest appeals is the plethora (si, el Guapo!) of engines it can be ordered with.

Many of its rivals – especially rivals of the smaller Sante Fe Sport – only offer one engine, which isn’t much of a plethora.

The Honda CR-V and Toyota RAV4, for instance, come with just one underhood option – a four without a turbo – regardless of trim. Even the Mazda CX-9, which is a rival of the larger/long wheelbase Sante Fe, comes only with a four (though with a turbo).

That, Jefe, is a plethora. 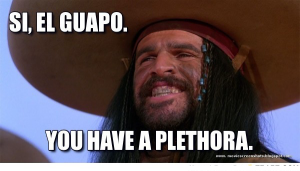 It’s also more than you get in the base trim Ford Escape, which comes standard with a 168 hp 2.5 liter engine.

Your next option is a turbocharged 2.0 liter four that makes 240 hp. This completely outclasses the CR-V and RAV4 – which aren’t available with anything else. The Ford Escape is available with a 2.0 liter turbo four that makes the same 240 hp – and it costs a couple thousand less than the turbo’d SF Sport. But, there’s a fly in the Ford’s soup, which we’ll get into shortly. 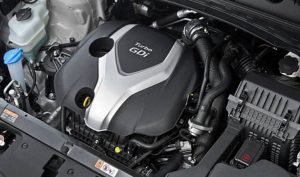 All of the Sante Fe’s available engines are paired with six-speed automatics, but you can go FWD or AWD with any of them, including the turbo four in the Sport and the V6 in the regular SF. 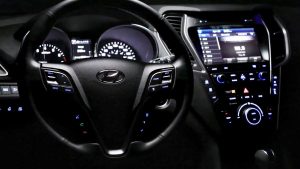 Mileage with the 2.4 liter four is class competitive: 21 city, 27 highway for FWD versions and 20 city, 26 with the optional AWD – about par for the course and the class.

What you might find more interesting is that the Hyundai’s optional 2.0 engine, which is much stronger, is capable of giving you about the same gas mileage: 20 city, 28 highway with FWD and 19 city, 26 highway with AWD.

Only one same-sized competitor runs quicker and gets better gas mileage – the Ford Escape when equipped with its available 2.0 liter “Ecoboost” engine. It can hustle to 60 in the mid-high sixxes and it manages 22 city, 30 highway (FWD versions). But there’s a fly in the soup . . . 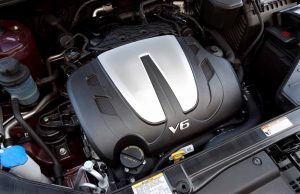 Still, not by much. 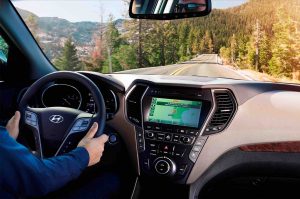 The Sante Fe Sport is one of the few hot rods left in this segment now that the RAV4 has been sheep-shorn of its formerly available V6 and its take-it-or-leave-it four isn’t turbocharged.

Like other modern turbo fours, the Hyundai’s turbocharged boost comes into play almost immediately, with peak torque output (260 ft.-lbs.) available at 1,750 RPM – an engine speed you’ll reach almost as soon as you push down on the accelerator. Which results in very responsive acceleration – something several of the SF Sport’s rivals lack. They have much less torque – and what torque there is doesn’t come into play until the engine is spinning closer to 4,000 RPM – which makes their engines sound and feel like they’re really working hard just to keep you moving.

But the SF Sport’s standard engine isn’t weak – which means you don’t have to buy the turbo’d engine to get adequate acceleration. 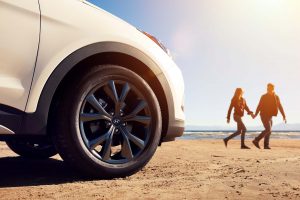 There are driver selectable settings in both cases – Sport and Eco – but the difference is hard to tell.

The big difference is being able to upsize.

The long-wheelbase SF gives you more cylinders – and more Sante Fe. You can’t order more RAV4 or CR-V or Escape. You’d need two of any of those to do what one long-wheelbase Sante Fe can: Carry seven people and pull 5,000 lbs.

Despite its larger size, the regular wheelbase SF is also sporty in the sense that it is not a bus. It’s shorter than most of its cross-shops and much shorter than some of them. Overall length is 193.1 inches long – vs. 204.3 inches for the new Chevy Traverse, as a for-instance. 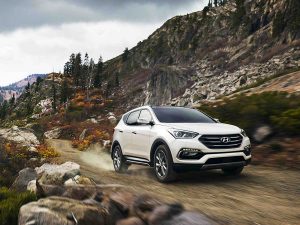 This makes the SF easier to U-turn and park in car-sized spots.

Get one while you can.

The pressure from Uncle to replace sixes with turbo fours in the name of fuel efficiency uber alles (even though the turbo fours aren’t much more fuel efficient than sixes, when you look into it) is becoming extreme and it is very likely that, within two or three  years at the outside, most if not all the crossovers in this class – including the SF – will come only with four cylinder engines. 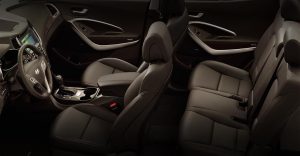 The seven-passenger SF isn’t as big as three-row/seven passenger cross-shops like the Chevy Traverse and Mazda CX-9 (which is 199.4 inches long overall).

But it is comparably roomy on the inside.

The Toyota Highlander is probably the closest shave for the Hyundai in that it’s about the same overall size (192.5 inches long) but has a lot more legroom up front (44 inches) and nearly as much second row legroom (38.4 inches) and a bit more room for cargo (83.2 inches vs. 80 for the SF).

There is also the new Honda Pilot to consider. It’s also not a bus (194.5 inches long overall) and is comparably roomy inside as well: 40.9 inches of legroom in its first row, 38.4 in the second and 83.8 cubic feet of total space for cargo.

The two-row SF Sport is also pretty roomy inside relative to its size outside. 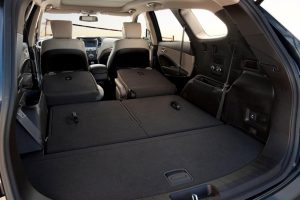 In fact, it has almost as much room inside as the long-wheelbase SF – at least, for passengers.

The same 41.3 inches of first row legroom and 39.4 inches of legroom for the backseaters. This latter is 2.6 inches more legroom in its second row than the Ford Escape has (36.8 inches).

That’s the Ford’s fly in the soup.

Two flies in the soup. 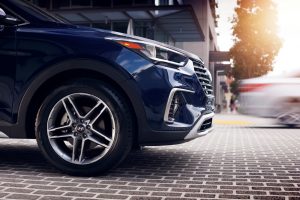 In terms of looks: The SF is less box-on-box-like than some cross-shops. It has a swept-back roofline and rising rear haunches, a visual trick to make it look like it’s about to pounce. Motorheads did the same thing to their muscle cars back in the ’70s with a set of Gabriel Hi-Jacker air shocks.

This effort to impart some style to a utilitarian ride does have some negative consequences, though.

Rearward visibility isn’t great due to the “fast” roofline and truncated (and also steeply slanted) back glass. The pinched side glass – which tapers upward toward the rear of the vehicle – doesn’t help, either.

But this is a problem common to most crossovers.

The interior has some Hyundai-specific design touches that are functionally good ideas as well as looking different for a change. These include trapezoidal air vents (in the Sport) that cant inward, toward the driver and front seat passenger and additional vents for the backseat occupants built into the B pillar.

There is a kind of sunken well ahead of the gear shifter that is a great place to put stuff you need to get at quickly – and the plugs for the USB and 12V power point are located here, too – where you can see and get at them easily. In many new cars, these ports are hidden in the center console, behind the gear selector, where they are hard to reach and impossible to see. 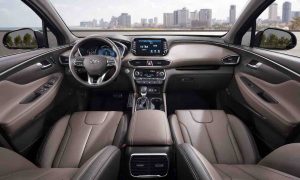 You can replace the second row bench with a set of captain’s chairs in the Limited. A heated steering wheel is available, too  – and on all trims, including the base trim Sport without having to buy the turbocharged engine if you don’t feel the need for speed.

Other mention-worthy SF features are a 360 degree/top-down park assist camera and available slide and recline rear seats. That’s something you don’t find in other crossovers in this price range – but do find in $80k-plus luxury crossovers and luxury sedans like the BMW 7 and Mercedes S-Class. 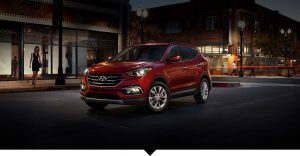 The panorama sunroof is fun, too. Your passengers can surf.

Hyundai’s still the only player in this segment that offers you a choice of wheelbases – and engines – and the option to go AWD or not with any of them.