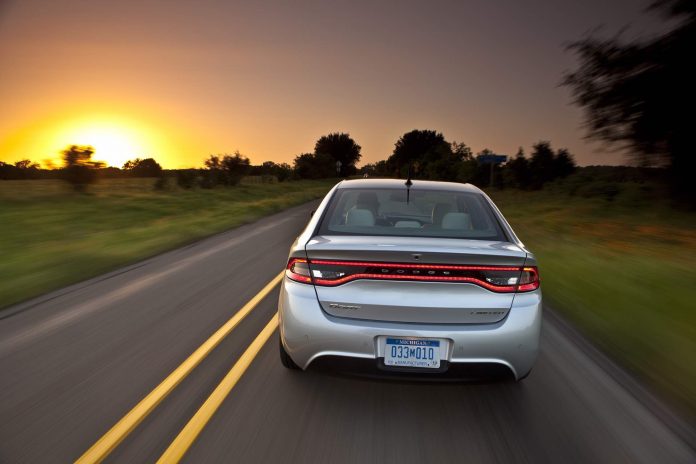 The news may come today – but it won’t be a surprise: Chrysler’s going the way of Plymouth. Maybe Dodge, too. They are not right for the times and it would take too much money to make them right. Enter the needle.

FiatChrysler CEO Sergio Marchionne has been releasing Five Year Plans for Jeep and Ram trucks, the latter’s having been cleaved away from the Dodge brand being a telling indicator about the future of that brand. There will be Desert Hawk Jeeps and a 6.2 liter supercharged/Hellcatted Ram Super truck to go up against Ford’s SVT Raptor, but the silence is funereal about future of Chrysler – which already hardly exists.

And soon, not even them.

But what killed Chrysler? One word – vampirism. Chrysler was sucked dry until nothing but the husk remained.

First by Mercedes, which – some may remember this – “partnered” with Chrysler back in the ‘early 2000s, when Chrysler was riding high on the success of its cab-forward designs – which you may also remember.  You don’t see them around much anymore, but when Clintigula was diddling Monica, Chrysler had a full lineup of hot-sellers, including the 300M (a latter-day revival of the company’s iconic Letter Series cars of the ‘50s and ‘60s) the LHS and Cirrus sedans and the Sebring coupe/convertible. 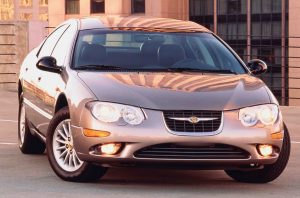 Mercedes had a much smaller lineup – nothing like today’s lineup. You may see how this ended up.

Mercedes leveraged Chrysler’s cash to expand its model lineup to encompass literally every conceivable niche short of a Mercedes rickshaw. Today, there is a Mercedes minivan, several Mercedes SUVs, a plethora of Mercedes sedans in every size (and in between) and even sedans with “coupe” styling. Plus multiple actual coupes and convertibles. There are currently at least a dozen different Mercedes models and then permutations and sub-models of those models.

Back in the late ’90s, just before the “merger of equals,” Mercedes had just seven models. 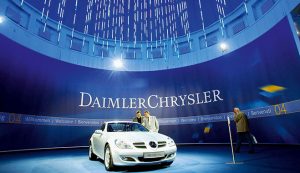 The merger was a boon for Mercedes, which swelled like Bella Lugosi on Chrysler’s cash. But it was a bust for Chrysler – which got not much in return for extending its lily white neck except for the cast-away chassis of Mercedes’ old E-Class sedan – which became the foundation for the new (and current) Chrysler 300 sedan. And the old SLK’s chassis, which was briefly re-skinned as the Chrysler Crossfire.

When Daimlerpulled out of Chrysler in 2006 – just in time for the general collapse of the car industry – Chrysler was left with not much cash and very little new. This usually creates a swirling effect, as in circling the bowl. 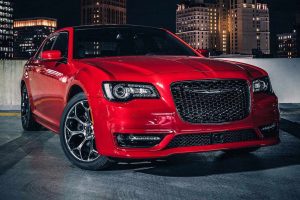 The E-Class based 300 sedan did  help, for awhile. And not just Chrysler, either. This platform also became the basis for the popular Dodge Charger sedan and the Challenger muscle coupe. All three of them gave back to Americans something which the government, via its fuel efficiency fatwas, had taken away from them: Large, rear-wheel-drive cars with available V8 engines that weren’t priced like an E-Class Mercedes.

They sold – but without something new on deck, it was a delaying action. 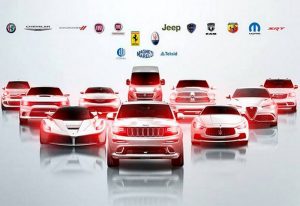 Fiat wanted back in – to the North American market, which it had left back in the late 1970s. The problem – no dealer network. Chrysler had that. Access. And Fiat had what Chrysler needed.

There was also the prospect – and eventually, the actuality – of shared resources, access to Fiat’s (and even Alfa’s) platforms, which could be used to spawn new Chryslers and Dodges, too. A deal was made. A sale. Fiat bought what remained of Chrysler, post-Daimler and the merged company became FiatChrysler, which it still was as of May 30, 2018 – but may not be by the time you read these words.

Fiat was kinder to Chrysler. There was give as well as take. Chrysler got one new car – the 200, which was based on an Alfa and not a bad one or an old one, either. But the timing was very bad. Chrysler got a new sedan at just the moment in time when sedans were becoming hard-sells no matter who was selling them. Even Toyota and Honda are having trouble convincing people to buy Camrys and Accords because people have come to prefer crossovers, with their more versatile layouts and more space-efficient designs.

On the other hand, Fiat didn’t give the 200 much of a chance. The car was cancelled before it got old – and without giving it a second chance at bat. The promised small car – it was to have been called the 100 – never materialized, nor the crossover SUV (possibly a shared platform project, cousin to the Alfa Stelvio) that might just possibly have pulled Chrysler out of its slow-motion death dive. 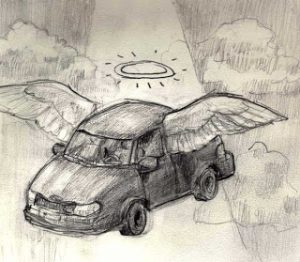 It is all very sad, particularly because Chrysler – unlike, say, Pontiac by the time of its rendering – still has life in its veins. A reason to live. But sometimes, the Motor Gods do not smile and then the sky grows dark and – just like that – it is all over.

Fake News About “Love” For Obamacare?