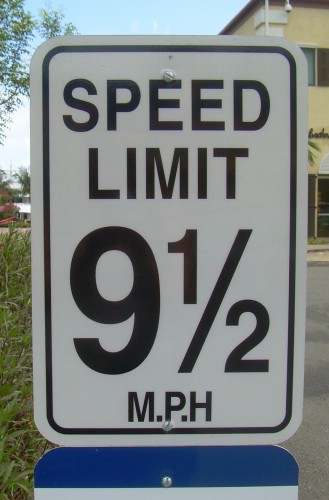 Speed limits are as much about saaaaaaaaafety as George W. Bush’s invasion of Poland – whoops, Iraq – was about (beady-eyed squint into the camera) “weapons of mass destruction.”

This is easily demonstrated.

In my neck of the Woods, there is a roughly 15 mile stretch of the Blue Ridge Parkway that has been posted 45 MPH since the ’70s, at least – if not since the Parkway was built, back in the 1930s. 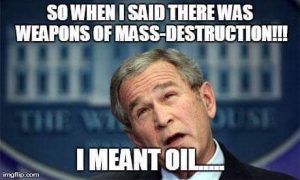 This is a limited-access secondary highway. People have been driving 45-50-something MPH  for a long time and for the most part, without triggering the Apocalypse.

All speed limits are arbitrary because they are based on the idea that one size fits all. That Driver A must driver no faster than Driver B is competent to drive – all based on a supposition about the abilities of both.

But this one was almost reasonable.

You could get where you were headed in reasonable time – at a reasonable pace – and without repercussions.

50 would have been more reasonable – and no speed limits at all even better, on the supposition that arbitrarily punishing people for driving faster than “x” and for no other reason (such as harm caused) is inherently . . . arbitrary and so inherently unjust.

But at least you could risk 50 without too much risk of a roadside fleecing on a trumped-up charge of  “speeding,” since the unwritten rule here as in most areas is you’ll usually be left alone for up to about 5 MPH over whatever’s posted.

And regardless, you could drive . . .  45, which comports with speed limits on similar limited-access secondary highways.

Presumably, 45 was a safe speed – since it was the legal speed.

Well, all of a sudden, this stretch of Parkway has been reposted 35 MPH. A ten MPH reduction – just because.

The very definition of arbitrary. 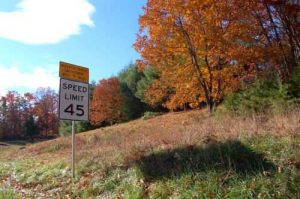 Even by the standards of government.

Without so much as a traffic study having been done. And by law, they are supposed to do a traffic survey prior to setting or changing any speed limit and the speed limit eventually arrived at is supposed to be set according to the 85th percentile rule – a traffic engineering dictum that speed laws at least roughly parallel the natural flow of traffic, such that 85 percent of the drivers are not “speeding” – as opposed to using speed laws as a way to punish drivers for simply driving.

And that’s what’s happened here. Just like that, what was legal and (presumably) safe no longer is.

And not just here, either.

It is happening all over the country. A friend wrote me recently to describe a similar thing in his neck of the Woods. Without legitimate rhyme or reason, overnight his whole town went from 45 to 35. 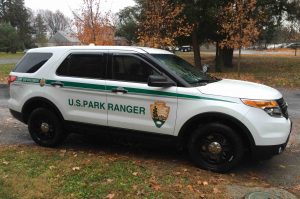 This is vicious – as well as ridiculous.

Under the new regime, a driver traveling 40 MPH – 5 MPH below the previously legal speed limit – is subject not only to being waylaid at gunpoint and compelled to hand over money to the government for what is now arbitrarily redefined as “speeding,” he can expect to be characterized as an “unsafe” driver by the insurance mafia when it gets wind of his “offense,” and the mafia will then mulct him again.

What has changed to make it thus?

Not the road. Well, not for the worse. The road has been improved. They just got finished resurfacing it, in fact. 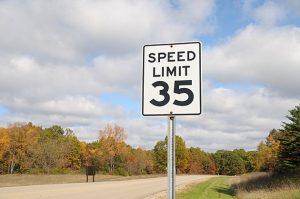 But that merely provided the cover for the changeover.

Just before the work began, armed government workers – Park Police, the same federal law enforcers who are paid with tax money mulcted from the citizenry to mulct more money from them via the enforcement of arbitrary speed laws – covered up the 45 MPH speed signs with plastic garbage bags and erected what at first appeared to be temporary 35 MPH signs.

This seemed reasonable – at first. Because the 35 MPH signs were assumed to be temporary – on account of this section of the Parkway being – temporarily – a work zone.

But it’s no longer a work zone. The work is done – the road crews are gone. 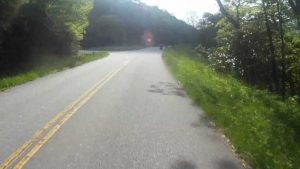 There’s no longer any legitimate reason for the speed limit to be cut back almost 20 percent – a tax on your time enforced by a threatened tax on your wallet.

But there is a reason.

It is to discourage driving by making it an unpleasant, time-consuming hassle. There is no other way to explain it. Certainly not saaaaaaaaaaaaaaaaaaaaaaaafety – for all the reasons just adduced.

It is part of the effort – coordinated and as effective as the invasion of Poland – to get us out of our cars by making us sick of being in them. At least, sick of being behind the wheel.

At 35 MPH, the greatest danger is falling asleep at the wheel.

Mission Accomplished – as that past grandmaster of the bait-and-switch (Bush) would say.

Don’t Fall For This One