CNN recently did a story – video below – about armed government workers forcibly detaining people for exercising their Fifth Amendment right to not answer questions.

The armed government workers are Border Patrol workers but they’re not anywhere near the border. They are dragnet stopping every car on roads often as far as 100 miles from the border and interrogating drivers as to their citizenship.

When a person asserts their Fifth Amendment right to remain silent, they are punished for doing so by being forcibly detained for as long as several hours. As in the case of another despicable practice – civil asset forfeiture – the people haven’t been charged with any crime. They are abused for being “uncooperative” with government goons – which isn’t a crime but most surely is an offense.

Offending the authority of the authorities is becoming the crime – as it once was in other times and places.

Note also the irony of American citizens being denied their rights as citizens. 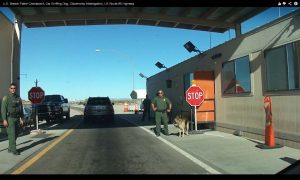 The first right being the presumption of innocence. To not have to disprove to the satisfaction of armed government goons that one isn’t guilty of  . . . something. It was once the case that the government had the burden of proving accused people guilty – and could not apply punish until after that guilt had been established in a court.

The second right being free from warrantless, probable cause-free searches as per the Fourth Amendment prohibition of such as unreasonable. 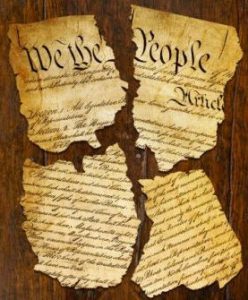 Such rights are no longer respected – despite being not only the law but the bedrock law of the United States – assuming the Constitution (of which the Bill of Rights is a component) remains the law.

Of course, the Constitution no longer is the law. Not in any meaningful sense – the plain English sense. Talmudic parsing of the Constitution’s plain English has discovered reasonableness in random, probable-cause-free dragnet searches and interrogations on account of “compelling state interest,” which English is nowhere to be found in the Constitution (including most of all the Bill of Rights).

And the presumption of innocence? Thrown in the Woods – along with the rest of the Bill of Rights. The real law is not the Constitution. It is whatever the government – government workers, including the armed ones as well as the robed ones – proclaim it to be, at their whim. Even when it is manifestly the opposite of the plain English written on that “goddam piece of paper,” as another government worker, in a moment of candor, once called it.

So why are we obliged to abide by it? To respect it? To consider it binding on us? Perhaps we ought to withdraw our consent – which of course non of us have ever formally given in the first place. 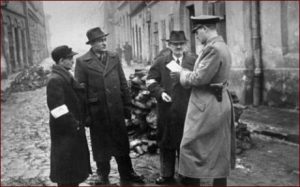 And how did it come to pass that the Border Patrol is patrolling – and much more – far away from the border? If the border is no longer the border then there is no border – in which case, why is there a border patrol?

The answer is these goons are not border patrolling. They are habituating the populace to internal checkpoints. And the purpose of that is to get people used to the idea that they are not free to travel.

That – in due time – they will need to get permission to travel.

This is already the case with regard to travel outside the United States, of course. People haven’t been free to come and go as they like since long before the police state’s most holy day – and convenient justification; the one conveniently and coincidentally named the same thing as the name people were already habituated to using in emergencies.

And it’s becoming the case just traveling down to the store.