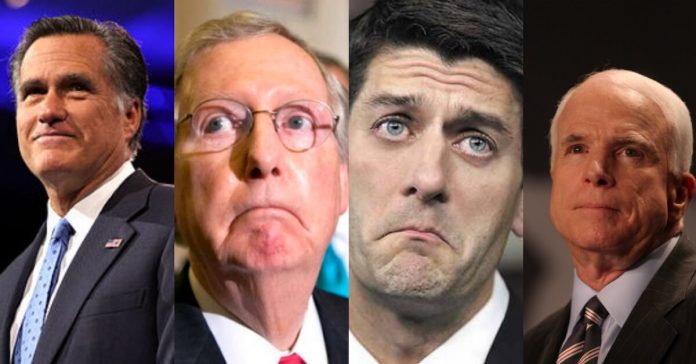 Like his father Ron, Senator Rand Paul has earned the right kind of enemies.

Ironically, many of them happen to be Republicans – the ones who cannot abide Paul’s principled defense of liberty – because it often conflicts with the business (and power) of these inside-the-Beltway apparatchiks.

Just as they tried to marginalize the elder Paul – some will recall the despicable treatment meted out to this gentle and decent man during the 2012 presidential primary by his fellow Republicans – so also the long knives are now glinting in the moonlight for his son.

The younger Paul is coming under fire for supporting the nomination to the Supreme Court of Brett Kavanaugh by President Trump. 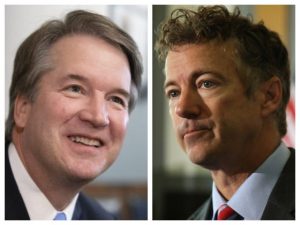 But why would Paul be attacked for supporting the president’s nominee?

Kavanaugh’s nomination apparently worries Swamp Thing Republicans because he may be in favor not merely of “replacing” Obamacare with some other government-run program but of repealing it outright – something establishment GOP’ers such as Mitt Romney as one for-instance very much oppose.

Romney and others of his bent support government-run (and government-mandated) “health care.” They just prefer your are forced to submit to their “plan” rather than a plan crafted by Democrats.

A difference without much distinction – like the establishment Republicans themselves and the reason for their repudiation by the voters.

Kavanaugh could also be the vote which returns to the states – and thus, one step closer to the people – the power to decide whether taxpayers should be forced to fund abortions (as distinct from the deceitful argument peddled by the “choice” crowd that Kavanaugh is champing at the bit to outlaw abortion).

Heaven forbid the people ever get to decide anything!

The Swamp Thing Republicans may prefer someone more like the agreeable Chief Justice John Roberts – who somehow found Obamacare – the Affordable Care Act – “constitutional” and even empowered the IRS to apply a tax as punishment for failing to purchase health insurance.

This breathtaking expansion of federal power has already been undermined by President Trump, who rescinded the so-called “individual mandate.” But the real threat is a Supreme Court reversal of the constitutionality of the ACA – and that could very well happen if Brett Kavanaugh becomes Justice Kavanaugh.

Hence the need to delay a vote on his nomination for as long as possible – ideally until after the midterms, in order (so the Swamp Things hope) that more Democrats and more Establishment Republicans will be voted in, so as to vote Kavanaugh out.

Attacking Paul and other Kavanaugh supporters such as Utah Senator Mike Lee is a key element of this strategy. 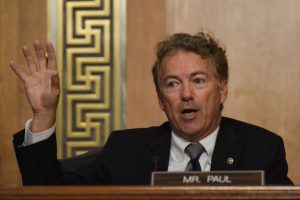 Several pieces have appeared in the establishment conservative media, including The Washington Examiner, essentially accusing Paul of supporting Kavanaugh for the sake of currying favor with President Trump.

This has been amen’d by by those on the political left – who as it turns out are simpatico with the Swamp Things. Which says something (not good) about both the left and the Swamp Thing Republicans.

The suggestion that Paul is somehow Trump’s poodle (as alleged by both) for supporting Kavanaugh just because Trump supports Kavanaugh is as risible and insulting as the suggestion – also made by the Swamp Things and their felloe travelers of the left  – that Trump is Putin’s poodle for attempting to talk with the Russian leader and for questioning the need for American taxpayers to finance the defense of Western European nations.

What really nettles the Swamp Things is that Rand – like his father Ron – isn’t a party man.

His principles – and his voting record – often put him at loggerheads with the party.

Examples include his opposition to the extension of the loathsome-to-liberty Patriot Act; in particular its authorization of warrantless mass wiretaps of the American people. While Paul was filibustering in defense of the Fourth Amendment’s requirement that searches (including wiretaps) be specific, based upon probable cause and only permissible when a warrant has been issued by a judge, establishment Republicans were defending the government’s near unlimited and unchecked authority under the Patriot Act.

Paul also rose to defend Americans against the proposed use of killer drones to murder them upon mere say-so of whomever happens to be the Decider in Washington.

This outrage was supported by the establishment Swamp Things.

That Paul is much less a friend of Trump’s than an enemy of Swamp Thing Republicans like Majority Mitch McConnell can also be gleaned from Pauls’ fight over McConnell’s midnight vote to expand federal spending by $300 billion.

McConnell and the other Swamp Things proceeded to blame Paul for “shutting down the government” – rather than praise (and better yet, support him) for defending the pockets of American taxpayers.

And none of them ever let a Libertarian-leaning word cross their lips . . . until after they were forced to do so first by the success of Ron Paul in conveying these ideas to the people and lately by the success of his son, Rand.

The enemies Paul has made speak volumes.

And that’s worth more than every penny.