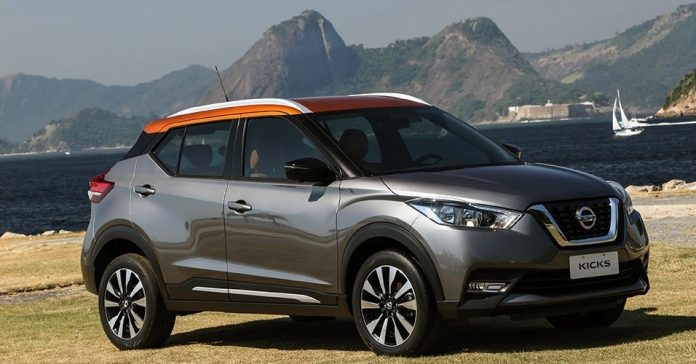 Crossover SUVs have become as popular as fireworks on the Fourth of July – which is why the cost of crossovers continues to increase.

But there is an antidote to the high cost of being popular.

If you’re willing to forgo just one thing. 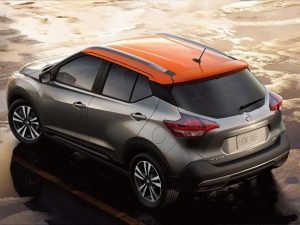 The Kicks is Nissan’s newest, smallest – and most affordable – crossover SUV.

The Kicks doesn’t offer all-wheel-drive, as most of its crossover brethren do. 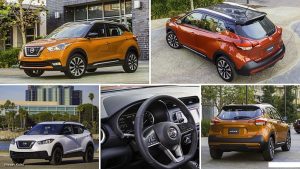 And it’s quicker than it’s AWD-equipped rivals – because it’s lighter.

It also has a smaller overall footprint (169.1 inches, bumper to bumper) which – along with a very tight turning radius (34.1 feet) makes it exceptionally easy to park and maneuver in the heavy urban/suburban traffic which Nissan demographers see as this little crossover’s natural environment. 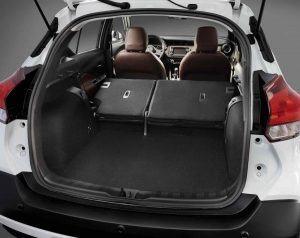 Among the most affordable small crossovers available.

Exceptionally roomy up front – and behind the back seat. 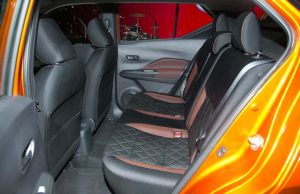 Backseat legroom (33.2 inches) is noticeably less than several others in this class.

Automatic (CVT) only transmission; a manual would have made it more of a kick to drive. 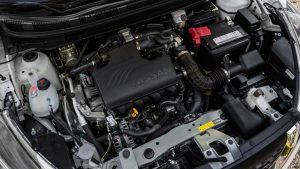 While AWD isn’t offered, it does come standard with 7 inches of ground clearance, which is almost as good as having AWD – and definitely costs less. And not just in terms of price.

Though the Kicks’ engine produces a bit less horsepower than rivals’ standard engines – the Subaru Crosstrek’s larger 2.0 liter engine makes 152 horsepower; the HR-V’s 1.8 liter engine 141 – the Kicks itself is quicker than these rivals.

Probably because it’s a lighter (just over 2,600 lbs. vs. just over 3,100 for the Crosstrek) because it doesn’t offer all-wheel-drive. 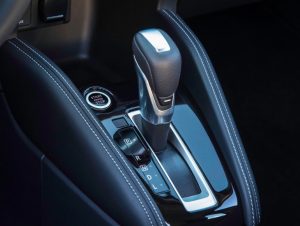 Because it’s lighter, the Kicks  gets noticeably better gas mileage, too – another money saver.

The Nissan’s 31 city, 36 highway is better than some economy cars – and significantly better than the Subaru Crosstrek’s 23 city, 29 highway (with the standard manual transmission; the automatic-equipped version does a bit better, 27 city, 33 highway). 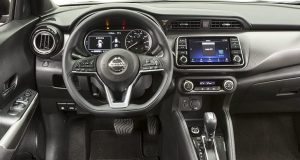 However, the Kicks has a really small gas tank – just 10.8 gallons. The Crosstrek’s tank holds 16.6 gallons; the HR-V’s 13.2 gallons. So even though both use more gas, you’ll have to gas up just as often in the Nissan.

Nissan probably decided it was more important to the people buying the Kicks to have a larger cargo area. The space under the floor not eaten up by a bigger gas tank enabled the designers to maximize the available space on the other side of the floorpan.

The Kicks may have a small tank – but it doesn’t have ASS – automatic stop-start. It is one of a dwindling number of new cars without this de facto government-mandated “fuel saving” feature – which doesn’t actually save very much fuel but does add to the car’s price as well as to ownership costs, via decreased battery life (guess what powers all that stop-starting?) as well as detracts from the driving experience by interrupting it, constantly.

For those who dislike ASS – which seems to be almost everyone – this by itself is almost reason enough to buy the Kicks vs. its ASS-equipped rivals.

One more thing: The Kicks also hasn’t got direct injection.  It is one of the very few 2019 model year cars – at any price point – you can find without it.

Which is not a bad thing.

DI has some advantages – the main one being that it enables an engine to run a higher compression ratio – and a higher CR is beneficial for power as well as mileage. But those upsides are countered by having to burn more expensive premium fuel to get the improved mileage/performance and by the higher cost and complexity of the system.

DI operates at several thousand PSI – vs. about 40 for a port fuel injection system – and has been associated with carbon fouling problems down the road (and out of warranty).

In an economy-minded car such as  the Kicks, a simpler, port fuel injection system arguably makes a lot more sense than DI.

And it’s nice that it burns regular unleaded fuel. 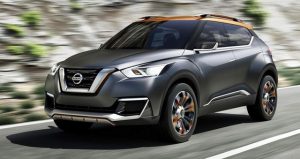 Nissan markets the Kicks as an urban/suburban runabout – which is why it doesn’t offer AWD. Even when it snows, the streets are usually cleared pretty quickly in downtown areas.

But it does have generous ground clearance (7 inches) and suspension articulation, which isn’t so much for off-roading as it is for dealing with (and soaking up) bumpy, pot-holed city/suburban streets.

This it does very well – probably because it has a very long wheelbase (103.1 inches) relative to its overall length (169.1 inches). The slightly longer overall Honda HR-V (170.9 inches) has a shorter wheelbase (102.8 inches) and while these differences may seem small in paper, they can matter a great deal in terms of how a care rides – especially on not-so-great roads. 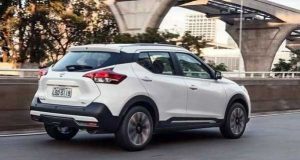 The Kicks’ abbreviated overall dimensions – it’s almost six inches shorter overall than the Subaru Crosstrek – also enable it to take advantage of curbside parking rivals have to pass by, while its tight turning circle lets it make U-turns without stopping, backing up, turning the wheel again and then proceeding.

In urban-suburban traffic, that matters as much as passing gear prowess in a car that operates outside the urban jungle.

And even outside its natural element, the Kicks does okay. It’s not by any stretch a speedy car, but it’s not as slow a car as some others. The main challenge with any of these is to think about where you want to be in time to get there.

Take advantage of the ebb and flow of traffic. Look for – and exploit – openings in traffic. Build speed before you need it. 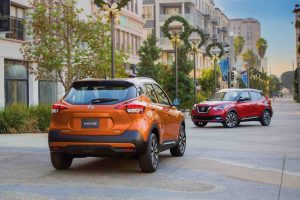 With a running start – and some paying attention – driving a car like this can actually be more entertaining than piddling along in a more powerful car whose power is dashed against the futility of being boxed in by traffic at every turn.

Just remember to keep an eye on the gas gauge. It goes down alarmingly quickly. The Kicks only carries a bit more fuel than some motorcycles.

Also, watch out for the optional 17-inch wheels – if you’re a city dude – or dudette. These large diameter “rims” – with short sidewall tires – don’t like potholes and are much more vulnerable to damage from rubbing up against curbs.

The standard 16s are the way to go here – and your Kicks will have a softer ride, too. 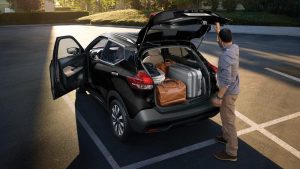 People tend to buy something that draws the eye – which the Kicks certainly does.

But it’s this little Nissan’s functionality that really stands out. Front row legroom (43.7 inches) is astounding, greater than in some full-size cars – and there’s twice as much cargo capacity behind the backseats (25.3 cubic feet) as most mid-sized sedans have in their trunks – without even folding them down. 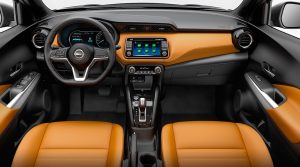 And when you do fold them down, the Kicks’ capacity more than doubles – to 53.1 cubic feet.

The Honda HR-V has a bit more total capacity (57.6 cubic feet) but you have to fold the second row down to access it; with its second row in use, the Honda’s cargo capacity (23.2 cubic) is a bit less than the Nissan’s.

The Kicks’ main deficit is its fairly tight backseat. 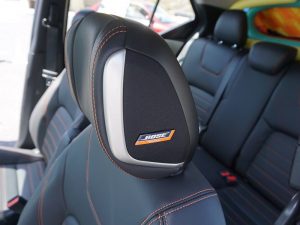 You can get some very high-end audio equipment in the not-high-priced Kicks – including a Bose “Personal Plus” surround sound system with a six-channel amplifier and eight speakers (two of them built into the driver’s headrest).

There are also three ways to connect to the audio/infotainment system: AppleCarPlay, AndroidAuto and Nissan’s own system, NissanConnect. All trims come standard with a 7 inch color LCD display and three USB ports. 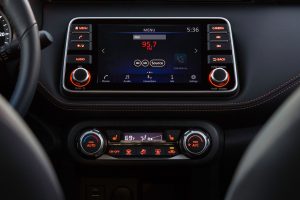 A 360 degree birds-eye-view exterior camera with moving object warning technology is available, too.

If you buy this car, you’ll have money left for going out Friday and Saturday night – as well as a cargo space big enough to crash out in afterward.

That’s a good way to get your Kicks!