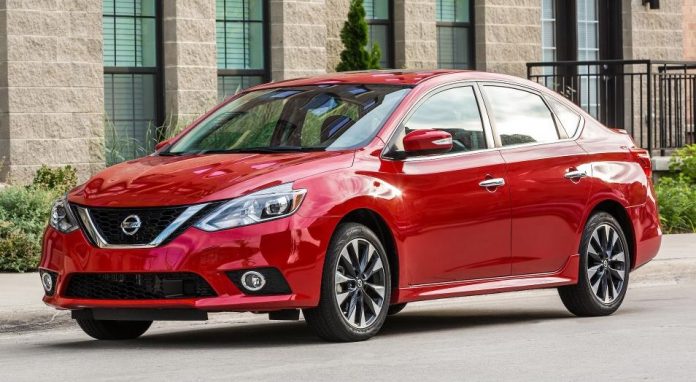 One of the secrets about new cars that’s hiding in plain sight is that “compact” sedans aren’t really anymore.

Models like the 2019 Nissan Sentra actually have more room inside than most mid-sized (on the outside) sedans – including the Sentra’s just-updated bigger brother, the 2019 Altima. 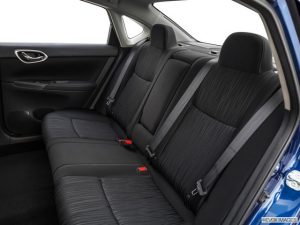 Mid-sized sedans like the new Altima (and the also-just-updated Toyota Camry and Honda Accord) increasingly emphasize styling and performance.

But that has made them less practical as family cars – which may explain why crossovers are outselling them. They’re more family friendly, due to their roomier interiors and abundant cargo space. 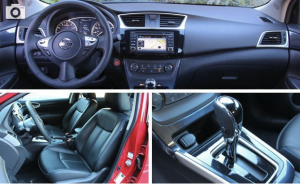 But, crossovers are getting pricey – which is a function of their popularity. For example, Nissan’s hot-selling Rogue starts at $24,800 – about the same as the starting price of the new Altima.

And about $7,000 more than the starting price of the Sentra.

That may have gotten your attention.

Which is precisely Nissan’s intention.

The Sentra is nominally a compact sedan in terms of its length and wheelbase but like others in its class – including the Toyota Corolla and Honda Civic, among others – it offers a mid-sized car’s interior space and a much more family-friendly acquisition price:

$17,790 to start for the base S trim with manual transmission; $23,020 for a loaded SL with an automatic, leather seats, a premium Bose audio system and an upgraded 5.8 inch touchscreen. 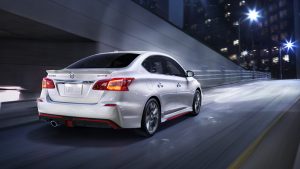 More sportiness is available, too – without costing you backseat space.

Theres the NISMO package (similar in theme to the NISMO performance packages available with other Nissan models, including the 370Z). It upgrades you to a 188 hp turbocharged 1.6 liter engine – available with either a six-speed manual transmission or a continuously variable (CVT) automatic – your pick for the same $25,840 price. Plus an 18-inch wheel/tire package, track-day suspension tuning and some very aggressive-looking visuals. 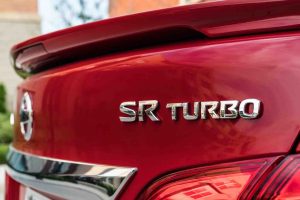 If you want the extra pep – the stronger 1.6 liter engine – but not the more aggressive NISMO suspension and visuals, you can get it in the $22,570 Sentra SR Turbo. 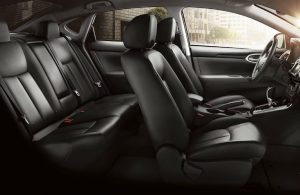 Big enough on the inside to comfortably carry five. Many mid-sized sport sedans no longer can.

Still available with a manual transmission – and you get a a small horsepower bump for going this way.

Some of Sentra’s newer-design rivals, such as the Toyota Corolla and the Honda Civic, are even roomier inside.

No more FE+ package means no more 40-plus MPG capability.

Manual transmission restricted to the base S trim (with 1.8 liter engine). 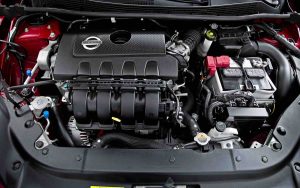 The Sentra’s standard engine is a 1.8 liter four that makes 124 or 130 horsepower, depending on which transmission you pick.

Models with the six-speed manual get a slightly peppier 130 hp version of this engine while models equipped with the continuously variable (CVT) automatic get a 124 horsepower version.

There is also a small but significant MPG difference, depending on which transmission you pick.

With the CVT automatic, the Sentra rates 29 city, 37 highway. With the manual, this droops a bit to 27 city, 35 highway. 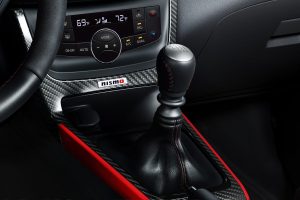 If you want more scoot, Nissan offers a 50 percent horsepower upgrade in the NISMO-themed Sentra and in the more visually subdued but mechanically similar Sentra SR Turbo. Both are powered by the same 1.6 liter, 188 hp turbocharged engine but you can go manual or automatic in the NISMO while the SR Turbo comes only with the CVT automatic.

The CVT does come with a driver-selectable (and performance-calibrated) manual mode.

Whether you choose the NISMO or the SR Turbo, you’ll get to 60 almost three full seconds sooner, in just over 7 seconds – a very quick time for what is still basically a compact-sized econo-family sedan. 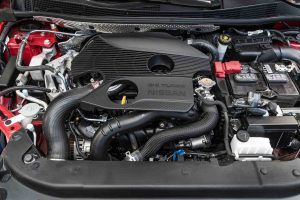 However, a word in praise for the less-peppy but more practical 1.8 liter engine.

It is a relatively simple engine, as current engines go. It is not a direct-injected (DI) engine, for openers. That means you will never have to worry about down-the-road carbon-crudding. Direct injected engines are vulnerable to that down-the-road-worry because of the nature of direct injection, which sprays fuel directly into the engine’s cylinders rather than just above the intake valve, as in a port-fuel injection system.

Gasoline – which is a solvent as well as a fuel – washes over and cleans the backside of the valves on its way into the cylinders  . . . in a car with port fuel injection (PFI).

So why the sudden popularity of DI, given the problems that come with DI? In part, because there’s an efficiency gain – about 3-5 percent – and that’s a big deal for car companies trying to deal with federal fuel economy fatwas. And also because DI helps an engine make a bit more power, all else being equal – and that’s something buyers appreciate. 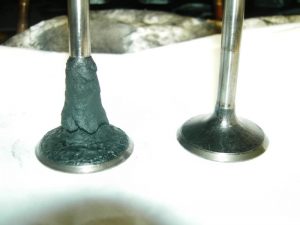 But the cons are real – and ought to be kept in mind as much as the pros.

The reason the Sentra’s 1.8 engine hasn’t got DI is because it’s an older-design – and that’s not a bad thing – if simplicity of design and never having to worry about carbon crudding matter to you.

Unlike the latest crop of smaller engines, it doesn’t depend on a turbo to make up for a lack of displacement.

No turbo means no worries – ever – about turbo-related troubles. 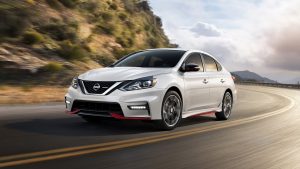 The 1.8 liter-powered Sentra’s not very speedy – let’s get that out up front.

But how much speed do you need? And how much extra do you want to pay for it – in terms of both MSRP – and roominess?

The new Altima (or Camry or Accord) will walk away from a Sentra at the dragstrip. But does your daily drive include the dragstrip?

If it doesn’t, the Sentra’s probably got enough speed for your family. 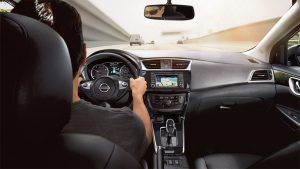 Arguably, the mid-sized sedan segment has become overly focused on speed – most of which has no real value except at the dragstrip.

Yes, of course – it’s exciting to shoot to 60 in less than six seconds. The new Altima (and Camry and Accord) can all do that.

In real-world driving, the Sentra keeps pace with other cars, regardless of the fact that many of those other cars could go faster.

Which brings up another secret hiding in plain sight. It is that the person behind the wheel is at least as important as what’s under the hood. The driver of a car like the Sentra who is paying attention to and anticipating the lights and the ebb and flow of traffic can almost always get the drop on drivers of theoretically speedier cars who aren’t paying attention. 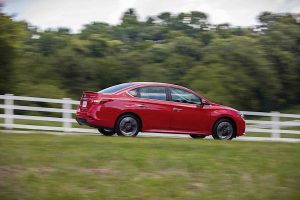 And for that, the Sentra has plenty of speed – even with the 1.8 liter engine.

If you feel a need for a bit more speed, there’s the optional 1.6 liter engine. It will give you gumption enough to cross swords with mid-sized sport sedans driven by more alert drivers – and they’ll still be driving a car with a tighter back seat.

As is true for all modern cars, the Sentra’s tall overdrive gearing lets it cruise without much apparent effort at speeds well over 80 – with either engine. The main boon of the 1.6 liter engine is you’ll have more reserves.

This engine also works really well with either transmission – the manual or the optional CVT – in part because of the turbo-boosted torque in the low and mid-ranges.

The 1.8 liter engine is much more fun with the manual – even if it costs you a couple of MPGs. 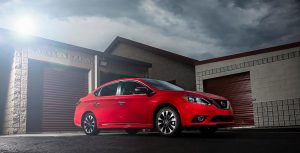 The Sentra looks like a mid-sized car, too – in part because of the size of its doors. They are longer than most (44 inches for the driver and front passenger door, according to my tape measure) which is about three inches longer than the typical compact sedan’s door. 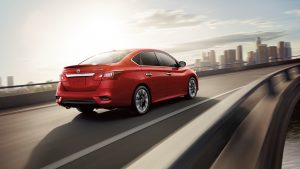 This is also about the same space – in both rows – as you’d get in the Rogue (43 inches up front and 37.9 in the second row). The Rogue’s crossover layout gives it more cargo capacity (32 cubic feet behind the second row; 70 cubic feet with the second row folded flat) but the Sentra’s 15.1 cubic feet is very competitive with larger sedans (such as the Altima, which has a 15.4 cubic foot trunk) and made very usable via a much-larger-than-usual pass-through.

Instead of the usual toaster-sized hole, you get an opening big enough to extend the usable trunk space to accommodate unwieldy item that you’d never fit inside other small sedans without hanging most of it outside the trunk.

That said, a hatchback version would probably increase this car’s appeal even more by doubling its cargo-carrying capacity, which would make it almost as practical as a Rogue – and still about $7k less expensive.

One wonders why Nissan and others don’t “fix” their sedan problem this way. It might be because they’re making so much money selling crossovers. 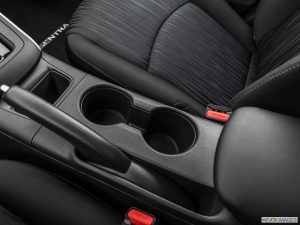 Also gone – unfortunately – are the previous-gen Sentra’s optional accessory gauges,  which had been mounted, 370Z-like, on top of the dash and canted toward the driver.

On the upside, the LCD screen is bigger now and the apps are up-to-date. 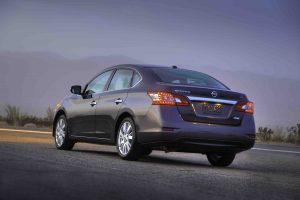 Also: The pull-up emergency brake is functionally much superior to the electrically engaged parking brake most new cars now come with. These are fine for holding the car in place once it’s not moving but are useless as a final resort for safely slowing the car if it is moving and the main brakes fail.

Finally, if you want to recover some of the MPGs that used to be available with the FE+ package that’s been discontinued, just replace the factory tires (when the time comes) with low rolling resistance replacements.

The Sentra’s not as sexy or as speedy as the new Altima – but it’s much more family friendly.

And it’s a lot friendlier to your bank balance than the new Rogue.