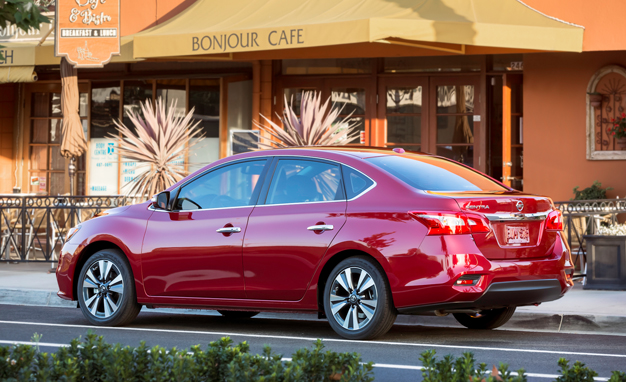 Why buy a sedan? 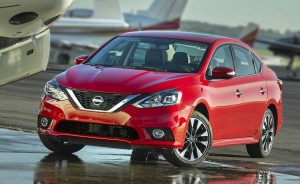 They cost less as advertised – and you’re in a stronger position, haggle-wise, to knock that down. With crossovers – which are popular right now – your position is weaker, because if you don’t buy this afternoon, probably someone else will tomorrow morning.

Well, fine – but why are sedans suddenly less popular vs. crossovers? 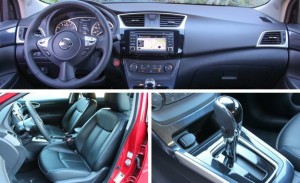 The first being that so many are already out there and riding high (literally) such that people who currently drive sedans feel overshadowed by them and also want to ride higher up off the ground.

The second reason has to do with capacity.

Crossovers have more of it – and it’s more usable.

You have a liftgate and a cargo area (connected to the passenger cabin) vs. a trunk that’s not. You can carry – and fit – more stuff in a crossover.

But, how much is that worth to you? 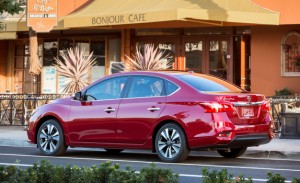 What if you don’t need to carry – and fit – lots of cargo?

Then maybe you want to have a look at a sedan.

Maybe this Nissan Sentra, for instance.

The Sentra is Nissan’s compact sedan, in the same general class as rivals like the Toyota Corolla, Honda Civic, Mazda3, Ford Focus and Chevy Cruze.

Historically, the Sentra has been one of the sportier models in this class – and so a distinct alternative to economy-minded compact sedans like the Corolla. 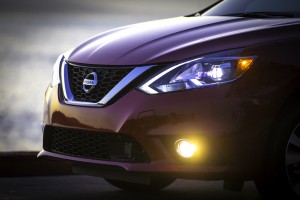 But Nissan has decided that a larger – and more fuel-efficient – Sentra will resonate more with buyers. So the current model has been upsized to nearly mid-sized sedan interior space: 42.5 inches of front seat legroom and 37.4 inches of backseat legroom.

Prices start at $16,780 for the base S model with 1.8 liter engine and a six-speed manual transmission.

There are also SV, SR and FE+ trims – the latter equipped with low-rolling resistance tires and aerodynamic bodywork to maximize fuel economy. 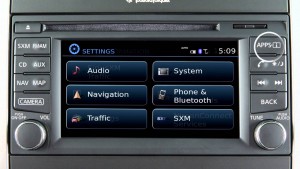 The ’16 Sentra gets a cosmetic refresh – new front and rear clips – and updated features, including (in higher trims) adaptive cruise control and automated emergency braking.

All trims, including the base S, feature Bluetooth wireless connectivity, a USB port for devices and secondary steering wheel-mounted controls for the audio system. 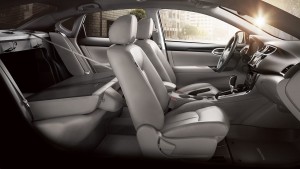 Big enough on the inside to comfortably carry five people.

Available with a manual transmission.

Costs thousands less than similar-in-size compact crossovers like the Honda HR-V, Mazda CX3 and so on. 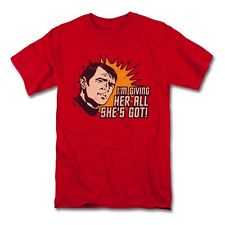 Which is all versions except the base S trim.

Manual only available in base S trim (new Chevy Cruze let you have a manual in higher/nicer trims).

Corolla’s got more room for passengers … in both rows.

Though it’s been face-lifted, the current Sentra is still basically the same as it was four years ago and faces fierce competition from several newer models, including the just-updated Honda Civic and the all-new (2016) Chevy Cruze sedan.

The Sentra itself has been upsized – but there’s a downsized engine under the hood. 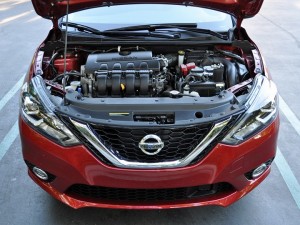 A six-speed manual transmission is standard in the S but all other trims come only with a continuously variable (CVT) automatic.

Even though the current Sentra weighs slightly less than the previous-generation Sentra (2,822 lbs. vs. 2,906 lbs.) the loss of engine displacement – and 10 hp – is evident when you want to get going.

Zero to 60 takes more than 10 seconds under the best circumstances – with the manual – and it’s slower with the CVT. This “performance” is well under par for the segment – and not up to the previous Sentra’s performance.

In the car’s defense, several other cars in this segment – among them, the Dodge Dart and also the Mazda3 – aren’t exactly speedy, either. However, these two do offer engine upgrades that cut the zero to 60 time down into the mid-low eights. And in the case of the Mazda3 with the Sky-Active engine, they give you that while still delivering exceptionally high gas mileage.

The good news is the Sentra’s 30 city, 39 highway MPG rating (40 MPG, if you order the FE+ enhancements). This is excellent, as good or better than anything else in this class. The Honda Civic, for instance, rates 30 city, 39 highway in standard trim; 31 city, 41 highway with the optional HF equipment. The Toyota Corolla comes in at 27 city, 36 highway – unless you move up two trims to the LE Eco ($22,895 to start) which manages a class-best 30 city, 42 highway. 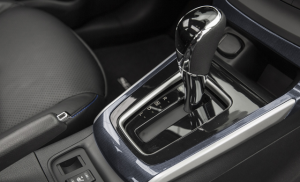 But only just barely.

The fact is it’s hard to beat any of these fuel-sippers without moving into the hybrid – or diesel – class.

However, some of the Sentra’s rivals have the advantage of not being slow.

The Cruze is capable of 29 city, 41 highway and of accelerating from 0 to 60 in just eight seconds with its standard engine.

As OJ used to say… look out! 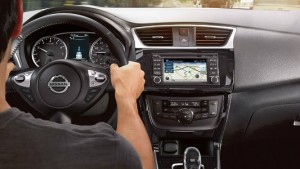 The down-powered, de-engined Sentra is noticeably slower than the previous generation Sentra (which ran 0-60 in the nines) and the CVT automatic transmission makes it feel (and sound) slower than it actually is.

Even though Nissan has done an admirable job in terms of rendering the bigger (longer, more wheelbase, etc.) 2016 Sentra lighter at the curb than the smaller, previous-generation Sentra, it still weighs a pretty startling (for a compact) 2,822 lbs.

And that’s before the driver gets in.

One 200 pound driver (me) and the car is over 3,000 lbs. With two additional occupants, the Sentra’s curb weight will be in the neighborhood of 3,300 pounds.

This is not far from the curb weight of my vintage ’70s muscle car – which compensates for its curb weight with a huge (7.4 liter) V8 under the hood.

Easing around, flat roads, stop-and-go, the Sentra keeps pace as well as other cars in this class. The gearing – and the aerodynamics – allow for easy-feeling 80-plus MPH cruising. 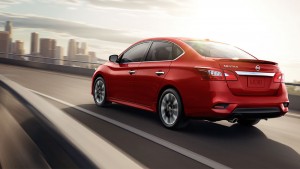 But there is next-to-nothing in reserve for passing or quick starts. From a dead stop, you can hold the accelerator pedal to the floor for 30 seconds straight and not quite broach the highest legally allowable highway speeds in the U.S.

The feeling of powerlessness is magnified by the wailing and gnashing of the CVT, which spins the poor little 1.8 to its 6,000 RPM redline and holds it there as long as you hold the pedal to the metal.

The Sentra’s CVT does have a Sport (as well as an Eco) setting – but I’d rather have a clutch and the ability to launch a little quicker and cull the drivetrain racket once rolling –  even if it cost me three or four MPGs.

I hugely recommend going with the six-speed manual transmission for this reason. 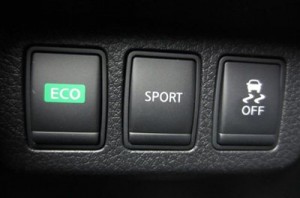 I understand why Nissan is hard-selling the CVT. But it wouldn’t be necessary if the Sentra didn’t weigh so much. A 2,500 lb. Sentra could probably hit 42 MPG without the CVT.

Then it would be fuel-efficient – and still fun.

This one’s fuel-efficient… but not much fun.

Its an appliance, a Transportation Unit – like the Corolla.

That’s apparently the target competition now. Not sporty newcomers like the Mazda3 – which appear to be taking over the slot the Sentra used to occupy. And from a business point-of-view, that probably makes sense – because Transportation Units are the volume sellers.

It’s where the money is. 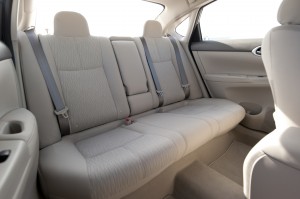 The new nose clip and tail panel give the Sentra the look of a two-thirds scale Altima or Maxima.

And it’s roomier (in some areas) inside, too.

Sentra edges ever-closer to being a mid-sized car – especially as regards backseat legroom.

Nissan probably decided to build a bigger Sentra for two reasons. First, to pitch the Sentra as a plausible family car and – second – to put more distance between it and its value-priced sibling, the Versa.

Note that the previous-generation Sentra’s interior specifications were virtually the same as the Versa’s and in one area at least – backseat legroom – the Versa actually had more room than the Sentra. Buyers were probably more willing to overlook the previous Sentra’s slightly cramped interior when the Sentra had more engine and more personality. But now that the Sentra has the same downsized 1.8 liter engine as the Versa? Doesn’t offer better performance than the Versa? 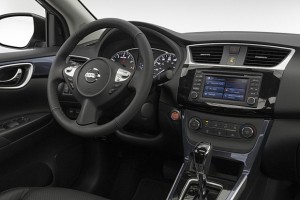 Thus, the new car is about two and a half inches longer than the old model and rides on a longer 106.3 inch wheelbase vs. 105.7 inches previously. This makes it look more substantial – and allows for a substantially roomier backseat area: three inches more legroom than before (37.4 inches ) as well as a mid-sized car’s trunk: 15.1 cubic feet vs. 13.1 cubic previously.

Also bigger are the front doors.

Actually, they’re huge relative to the rest of the car – and relative  to other cars. I got out my tape measure – 44 inches from edge to edge. For a “compact” car, that’s a big door. Some perspective: I happened to have a Buick Verano sedan the same week I had the Sentra. The Verano – Buick’s entry-luxury sedan – is a bigger car overall than the Sentra – 183.9 inches end to end vs. 182.1 inches for the Nissan.

But the  Buick’s front doors were three full inches shorter than the Sentra’s. 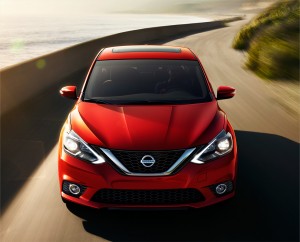 The rest of the Sentra’s interior has also been updated.

The old car’s high-mounted shifter console is gone. In its place, a conventional center console and floor-mounted shifter – available with wood trim covers rather than carbon fiber or brushed metal. Also gone – unfortunately – are the previous Sentra’s optional accessory gauges,  which had been mounted, 370Z-like, on top of the dash and canted toward the driver.

On the other hand, the LCD screen is bigger now. 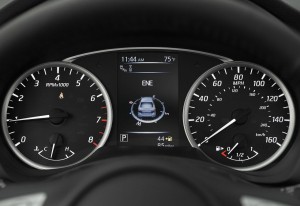 The old car would get into the 100s without too much trouble.

The new one is pretty much done by 90.

It’s pretty obvious the trend toward smaller, less powerful – and more economical – engines is upon us.

Nissan’s just bowing to the inevitable – and trying to make the best of it.

Also in that department: Making the manual transmission available in other than the base S trims. 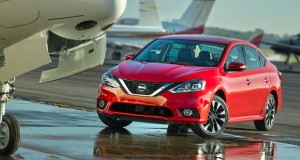 The available seat heaters are nice – and the pull-up emergency brake is functionally much superior to the becoming-ubiquitous parking brake (often, electrically activated) that is fine for holding the car in place once it’s not moving but useless as a final resort for safely slowing the car if it is moving and the main brakes fail.

But the most important thing about the ’16 Sentra, probably, is that an updated (maybe 2017) Sentra is on the horizon. And that means Nissan dealers (who likely know about this) will want to clear out supplies of the ’16s as quickly as possible.

Also, there’s the fact of crossover popularity – which has made sedans in general a harder sell. Which is good news for those of you who are still interested in a sedan.

It’s not the newest – much less the speediest – thing. But it’s roomier-than-most, gets great gas mileage and… most of all… the price is right.