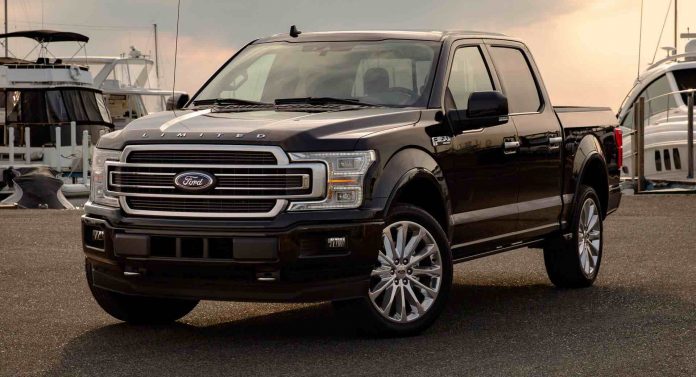 It’s interesting that just as diesels are disappearing from the passenger car market, they’re making a big comeback in trucks.

Ford is the latest to bring one back, joining Ram – which offers one in the Ram 1500 – and anticipating Chevy, which will also offer one later this year in the 2019 Silverado 1500. 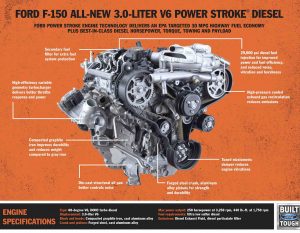 A V6 that’s mightier than any of their V8s.

The F-150 is Ford’s full-size, 1500 series pick-up. Like its main rivals – the Chevy Silverado and Ram 1500  – it’s available in an almost limitless array of cab/bed/trim configurations, from a fairly basic work truck to a $70k-plus Vegas Casino on wheels that gets to 60 in less than 5 seconds.

This engine bridges the gap between smaller gas-burning engines which are reasonably fuel-efficient but can’t pull or haul much – and powerful (but thirsty) V8s.

The Joker in the deck – Heath Ledger-style –  is the F-truck’s newly available 450 horsepower twin-turbo V6 – which was previously only available in the limited-production/high-performance SVT Raptor version of the F-150.

Now it’s available in the posh and doesn’t-look-like-a-killer Limited trim.

Equipped with this turbocharged berserker, the F-150 – a full size truck, remember – can launch itself to 60 MPH almost as quickly as a Mustang GT. 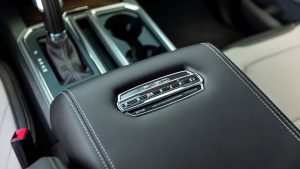 If you buy either the diesel or the Raptor V6, you’ll get a 36 gallon fuel tank in place of the otherwise standard 23-26 gallon tank. 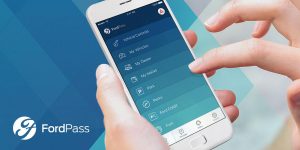 FordPass Connect is standard on XLT and higher trims.

This is an upgraded version of Ford’s Sync interface; it allows remote access to the vehicle via smartphone. You can use FordPass Connect to remotely unlock – or lock  – your truck, check maintenance reminders and even schedule the engine to start automatically at whatever day/time you select.

The CD player has been deleted from the audio system.

A truck that pulls – and hauls.

Most engine choices (four gas, one diesel) of any current half-ton truck.

Ladder – and pole – built into tailgate, to help you get up and into bed. 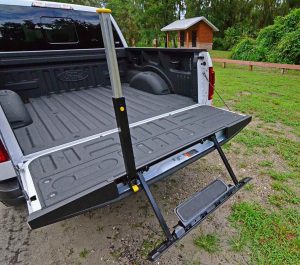 Rivals make power the simpler way – with bigger engines. No need for complexity-adding turbos and peripherals that might need expensive repairs at some point down the road.

Aluminum body reduces weight, but is more vulnerable to damage and costs more to repair than steel.

Bed is so high up that you need a ladder – and a grab pole – to get up there. 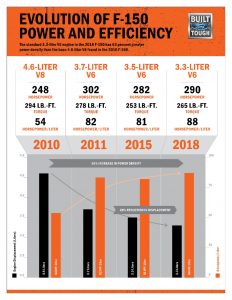 The V6 is paired with a six-speed automatic; you can go 2WD or 4WD.

Next up is a smaller – but much stronger – 2.7 liter V6. It makes a very sturdy 325 horsepower and 400 ft.-lbs. of torque, astounding power from such a little engine. The secret is the little engine isn’t, really. A pair of turbochargers pump it up to the functional equivalent, when on boost, of a V8 in the mid-five-liters range.

So why not just use a five liter V8 and forget the turbos? 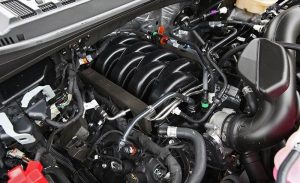 Because when the turbos aren’t pumping up the displacement of the 2.7 liter engine, it’s a little engine and so consumes less gas than a larger full-time displacement engine: 20 city, 26 highway for the 2WD model, which is actually better than the base 3.3 V6  (19 city, 25 highway) and remarkable given the power uptick.

The 2.7 V6 also has a leverage advantage. It is paired with a 10-speed automatic, which has three overdrive gears.

If you’re a traditionalist and like full-time displacement, there’s still a 5.0 liter V8 on the roster. It makes 395 horsepower and the same 400 ft.-lbs. of torque as the 2.7 liter engine, without the turbos. Mileage is 17 city, 23 highway  – a bit less than the 2.7 liter engine, but better than the ’90 F-150’s base straight six, which made less than half as much power. 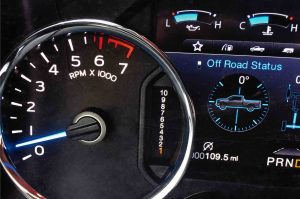 This engine is also paired with the 10 speed automatic and (as with the 2.7 engine) you can go with 2WD or 4WD, engaged via a rotary knob on the center stack; no getting out to lock the hubs.

Normally – well, historically – the big V8 would be at the top of the lineup. But it’s actually more like the back-up quarterback.

The F-150’s strongest engine is a smaller engine. Just 3.5 liters – which is also smaller than the top-of-the-line V8s in rivals like the Chevy Silverado, which offers a yuge 6.2 liter V8 as its heavyweight engine; and the Ram 1500 – which packs a 5.7 liter V8. 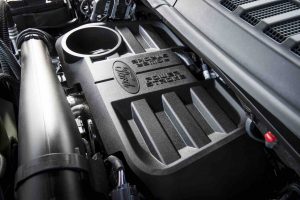 Equipped with the latter version, the F-150 is the quickest way to haul a stack of 4×8 sheets around. Zero to 60 in 5 seconds or less (if the bed is empty).

Official mileage numbers weren’t available when this review was written in early February, but should be in the same ballpark as the 375 hp version of the 3.5 V6, which rates 18 city, 25 highway in 2WD form.

That’s best in class, too. 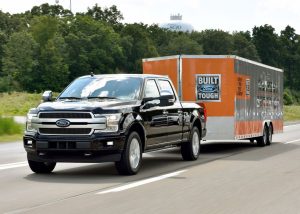 Ford touts 30 MPG highway capability for the 2WD model – also best-in-class. This engine also comes bundled with a 36 gallon fuel tank – giving it extremely long legs on the highway. Theoretically, it ought to be able go almost 1,000 highway miles before it needs to pit.

That’ll take you most of the way from El Paso to Nacogdoches  . . . if your bladder can take it. 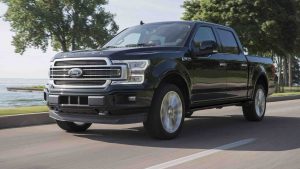 Another measure of how far we’ve come is how nice big trucks have become – and how easy they are to drive.

The 1990 F-truck was a truck – in the good and bad sense. Good, in that it was rugged and simple and you could beat the hell out of it and the thing would usually pick itself off the mat, Rocky-style – and come back for more.

But bad in the sense that it beat you up, too.

Trucks used to have the finesse of a drunken buffalo tromping through your living room. You felt – and heard – everything. A long drive in a truck was something that required physical endurance and good circulation as well as a loud aftermarket stereo to drown out the drone of the drivetrain, tires and road.

The F-150 can do more work than its ancestors but it isn’t work to live with it. It is so nice a place to be in that you don’t need a car for when you’re not working.

Ford sent me the new Raptor engine-equipped Limited, which is also one of the quickest vehicles on the road.

A new Mustang GT is only negligibly quicker (count out 1 second; that’s the difference) despite being a third the size and weighing at least 1,000 lbs. less and the Mustang, though all kinds of fun to drive, does not set five comfortably, cannot pull 13,200 lbs. and is as useless in the snow as empty pistol at a gun fight.

The 510 ft.-lbs. of torque must be experienced to be appreciated. The accelerator pedal is a magic pedal. Depress it even a little bit and this massive ingot of aluminum folds space and – just like that – you’re someplace else. The startled looks on the faces of the drivers of sports cars as you not only keep pace but outpace them is hard to put a price tag on.

This is a case of have two cakes, eating them – and not getting fat.

As easy as the F-150 is to drive, it can be harder to park. Or rather, it’s tougher to find parking spots which will accommodate its behemothian dimensions. Ford tries to help with various park assist (and trailer back-up) technologies, but size ultimately does matter.

The world isn’t sized for it. Dealing with tight-radius drive-thrus, cul-de-sacs and secondary roads narrowed by parked cars on either curbside can make piloting an F-150 tricky at times.

But once straightened out, out on the open road, there’s very little that can touch it, whether the measure is how quick it is or how nice it is – or how capable it is. 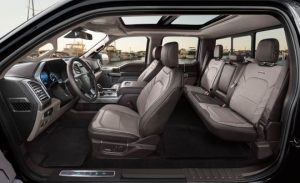 The F-truck has the same general shape as other 1500s – with Ford-specific styling cues – but the thing that makes it not only different but unique is what it’s made of.

Every other 1500 series truck is a steel-bodied truck. The Ford’s body is made entirely of aluminum. This shaves several hundred pounds of weight off the bottom line, which is part of the reason for the F-truck’s quickness – as well as as its capabilities. The less of itself the drivetrain has to haul around, the more cargo it can cart in its bed – and the heavier the trailer it can tow. 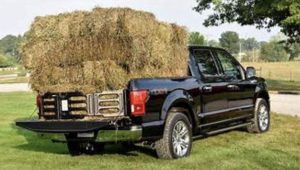 The downside is what happens if you hit something – or something hits you (like a deer). Aluminum is more easily bent than steel – and harder to fix once it is. The F-truck’s repair costs are thus higher  – at least potentially – and this will probably reflect in insurance costs, eventually.

Also, while aluminum doesn’t rust, it does corrode. Nothing lasts forever but the Earth and sky – and not even them.

You can still get the F-150 in the traditional work truck configuration – regular cab, with an eight-foot bed. But you can also mix and match cabs and beds to suit – all the way up to a 163.7 inch wheelbase SuperCrew with 43.6 inches of backseat legroom and an eight-foot-long bed behind them. 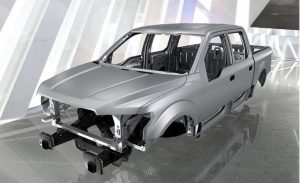 Or split the difference with a SuperCab, which has smaller back doors and a bit less legroom (33.5 inches) but still enough space to carry three adult passengers without making them suffer.

Then adjust bed length to suit – long (eight foot), mid (6.5 foot) or short (5.6 foot). You can arrange these almost however you like, regardless of trim (base XL, XLT, Lariat, King Ranch, Platinum and Limited). 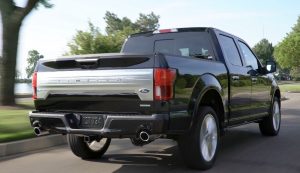 Chevy and Ram also offer the same degree of mix and match – but not the aluminum body, for good or ill. The Japanese 1500 series trucks – the Toyota Tundra and Nissan Titan – offer a  limited range of cab/bed configurations, and fewer drivetrain choices.

They’re also steel-bodied – for good or ill, depending on your point of view. 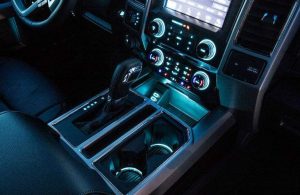 All trims – even the base XL – come with AC, trailer sway control, trailer pre-wiring and a 4.2 inch LCD display screen in the center stack.

Power windows, however, are not included with the base XL trim. The XL’s manual roll ’em up windows are among the few “rough it’ aspects you’ll encounter – and it’s more about the people who use their trucks for serious work not wanting to have to worry about a power window not rolling up (or down) on a 105 degree Texas day. 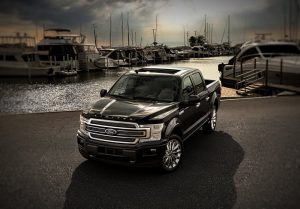 Just a couple of years ago, only extremely high-end luxury cars (as in $120k-plus Benz S-Class and BMW 7 Series sedans) had these.

Now you can have them.