As the wave crested, everyone – even Porsche – sold one. Sometimes several. Then SUVs began to sour as people got wise to the not-so-sporty driving qualities of sport utility vehicles – and their Elvis-like appetites, too.

So, we got crossovers. Car-based wagons that sort-of look like SUVs but behave more like cars and drink a bit less gas.

In 2008, Nissan added to the growing ranks of such vehicles, bringing forth the Rogue, a crossover about the same size as a Honda CR-V but less dowdy-looking and a lot more fun to drive.

Three years later, the Rogue gets updated to keep it current and continues to be a spicier, if a bit less practical, alternative to its ho-hum competition.

The Rogue is a medium-small crossover wagon with two rows of seats that can handle up to five people. It looks like a down-sized Murano but shares much of its mechanical underthings with the Sentra – including its engine.

The Rogue gets a facelift with redesigned front bumper (the most noticeable change being the lower section up front with the sculpted in fog light recesses) and a new SV trim replacing the previous (2010) SL trim.

More personality looks-wise and driving wise than a CR-V or RAV4.

Price gap widens even more at the top of the lineup. A Honda CR-V EX-L with navigation costs almost $30k vs. $25k for a top-of-the-line AWD-equipped Rogue Krom Edition.

Acceleration (zero to 60 in the mid 8s) not up to Rogue-ish image.

Like the CR-V, the Rogue doesn’t offer a V-6 upgrade (you can get one in the Toyota RAV4).

Not everyone will like the Rogue’s mandatory Continuously Variable (CVT) automatic transmission.

The Rogue is powered by a 2.5 liter, 170 hp four-cylinder engine teamed up with a Continuously Variable (CVT) automatic.

As with the Honda CR-V, there’s no optional engine – or transmission.

The Rogue can run to 60 mph in about 8.6-8.8 seconds – about the same as the slightly more powerful (but also slightly heavier) Honda CR-V.

A V-6 RAV4 will mop the floor with both of them – in a straight line.

Gas mileage is 22 city/28 highway with FWD; 22/26 with the optional AWD system. This is a slight (1-2 MPG) improvement over last year’s Rogue, achieved by using lower rolling resistance tires and an underbody pan to smooth airflow and decrease wind resistance.

The Rogue is built off of the same platform as the current Sentra sedan – and uses the same basic engine that comes in the performance-tuned Sentra SE-R.

Also, the Sentra SE-R is available with a six speed manual transmission while the Rogue comes only with the CVT automatic.

The net result is that the Rogue is eager, but overweight and a bit underpowered.

Under hard acceleration it feels a lot like a Sentra with too many people on board – and too much stuff in the trunk.

Why not offer the Sentra SE-R Spec V’s 200 hp version of the 2.5 liter engine? And at least the option of a manual transmission, or a conventional (non-CVT) automatic?

Either – better yet, both – would make the Rogue a lot more roguish.

Point of clarification: CVTs were designed chiefly for fuel-ecoonomy reasons. They offer the ease-of-use of a conventional automatic with the gas mileage potential of a manual. That’s the main reason why so many car companies are selling CVTs. Even a relatively small uptick in the EPA averages is a big deal for the automakers, who are faced with having to meet a soon-to-be-in-force federal law requiring all new cars to average 35 MPGs. So even a seemingly paltry improvement of 1-2 MPGs made possible by going with a CVT vs. a conventional automatic is a major sell for the car companies – even if it’s not the ideal set-up for the people buying the cars.

In a borderline heavy/could-use-more-power vehicle like the Rogue, a CVT adds to the impression of the engine being overtaxed. Give it more than about half pedal and the engine RPMs shoot up to 4,000 RPMs or more – and stay there until you back off the gas. This is how CVTs work. They maximize efficiency by keeping the engine constantly at the right spot in the powerband (RPM range) whereas a conventional automatic is constantly “stepping” up or down to match the gearing to the road speed/load on the engine.

The shift-less quality of CVTs is a plus; there’s no snap back and forth as the car accelerates, because there are no gears to shift. But the downside is the engine can feel (and sound) like it’s being over-revved and working too hard.

That’s the Rogue’s chief weakness as I see it.

If you like the appearance of the Murano – Nissan’s upscale large crossover – you’ll like the way the Rogue looks, too. Very similar overall shape – just on a smaller scale.

Like its big brother, it has a rakish roofline, hunky-looking side panels with pontoon-like fender flares – and can be ordered with fairly large (18 inch) wheels, which enhances its aggressive stance. The front end is toothsome, with a wide-mouthed grille and fist-sized chromed “Nissan” badge in the center. The top edges of the four doors sit lower than the front windshield and cant upward slightly to the point where they meet the third (fixed) quarter window near the tailgate.

On the downside, form sacrifices function – at least in terms of available cargo space relative to competitors like the Honda CR-V and Toyota RAV4.

The Rogue has about 58 cubic feet of cargo space with its second row seats folded down. That is a lot less than the available space in the CR-V and the Toyota RAV4 – both of which have about 73 cubic feet of total capacity.

On the other hand, the Rogue is more alive-feeling than functional but personality-free crossovers like the CR-V a RAV4.

And there’s a final practical plus: The Rogue’s got more ground clearance than the CR-V and RAV4. It sits 8.3 inches off the ground vs. 6.7 for the CR-V and 7.5 for the RAV4.

That should help in the snow, especially if the snow’s not been plowed yet.

All-wheel-drive (and four-wheel-drive) are great but if the car rides up on packed snow, it’s going to get stuck, regardless.

The Rogue’s extra inch or so of clearance could be the difference between getting there – and getting out your shovel.

Base S models come well-equipped with standard AC, most power options (including keyless entry) and a nice stereo with MP3 jack and CD player. Higher trim SV and Krom versions come with things like an exhaust tip mounted in the center of the rear bumper, 17 or 18 inch wheels, GPS Bluetooth wireless and SiriusXM satellite radio.

A small but nice touch worth mentioning is the cargo area’s large once-piece mat, which has a rubberized underside. Flip it over and you’ve got a safe place to let the dog ride. The Rogue’s cabin also features a large center console storage cubby and an even larger glovebox, along with clever underseat storage trays.

Buyer’s note: Nissan is one of the very few automakers that hasn’t yet caved to politically correct pressures and fitted its cars with an annoying “belt minder” buzzer that harasses you if you haven’t immediately buckled-up for safety – even if all you’re doing is trundling down the driveway to the mailbox.

Just a red light on the dash that blinks at you.

All the Rogue really needs to live up to its name is a bit more power under the hood – and perhaps another pedal for your feet. 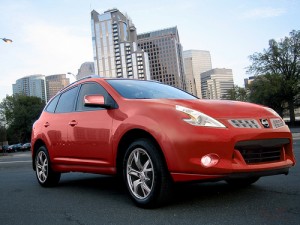