VW – which built its business selling small cars – is building big ones to grow its business.

Models like the new Atlas – which is the equivalent in size, weight and seating capacity of at least two old-school Beetles.

Plus, it has a working heater!

The Atlas is a full-size, three-row crossover SUV – and the largest VW to date.

It gives VW something to offer buyers who need room for more than five people – plus their stuff. 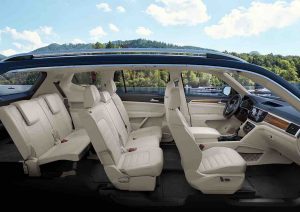 Prices start at $30,895 for the base S trim with a 2.0 liter turbocharged four cylinder engine, eight speed automatic and front-wheel-drive.

A top-of-the-line SEL with a 3.6 liter V6 (not turbocharged) the eight-speed automatic and VW’s 4Motion all-wheel-drive system stickers for $48,395.

Rivals include the new Subaru Ascent – which also happens to be the largest vehicle Subaru has ever offered, for the same reasons.

The Ascent is a little pricier – $31,995 to start – but it comes standard with AWD (optional in the VW) and can seat as many as eight people while the VW maxes out at room for seven.

The Honda Pilot is another possible cross-shop. Like the VW, it’s available in both FWD and AWD versions. But – like the Ascent – it costs more to start ($31,450) and also has a tight third row (31.9 inches of legroom).

It does, however, come standard with a powerful V6 – extra cost in thew VW – and has a higher standard maximum tow rating: 3,500 lbs. vs. 2,000 lbs. for the four cylinder-powered Atlas.

For 2019 – the second year the Atlas has been offered – the base S trim gets more standard equipment, including automatic headlights and rain-sensing wipers; top-of-the-line SEL trims come standard with a flatscreen Digital Cockpit, upgraded Discover Media navigation system and a standard heated steering wheel.

Two engine choices – and the choice to buy (or skip) AWD.

Lower price to start than rivals. 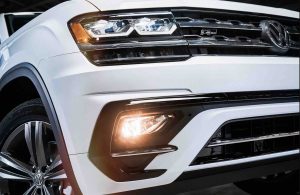 Only offered in seven-passenger seating configuration. Ascent and Pilot offer seating for up to eight.

Though the Atlas is big, its standard engine is comparatively small. Just 2.0 liters – which is only slightly bigger than the 1.6 liter engine used in ‘70s-era Super Beetles. But the Beetle’s engine only needed to motivate about 1,700 pounds. 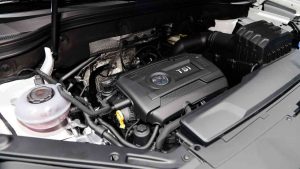 To deal with that, the Atlas’ 2.0 liter engine is boosted by a turbo, which pumps up its output to 235 horsepower (and 256 ft.-lbs. of torque)  which is about four times as much power as a ‘70s-era Beetle’s four delivered.

Which accounts for the fact that the two-ton-plus Atlas can get to 60 in 7.5 seconds  – nearly twice as fast as a ’70s-era Beetle (which needed about 15 seconds to do the deed, assuming a perfect tune and the wind at your back). 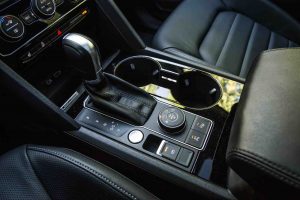 If you want all-wheel-drive, however, you’ll have to buy the optional 3.6 liter V6.

It can be paired with either FWD or the optional 4Motion AWD system, which features adaptive torque distribution. This is similar to the AWD system in the Ascent; both have the ability to route engine torque not just from front to back but also from side to side. This is a boon for handling as well as traction, because it helps corrects for understeer and oversteer during high-speed cornering and also maintains traction when even just one wheel has it. 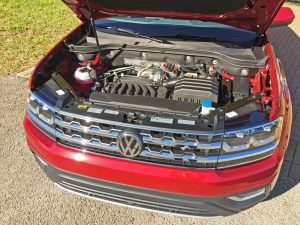 The Pilot comes standard with a 3,500 lb. tow rating (5,000 lbs. max tow rating when ordered with the optional trailering package).

But the VW catches up when ordered with the V6. 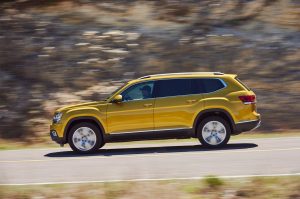 If you don’t need AWD, you may actually prefer the 2.0 liter engine.

As 1,600 RPM is basically a fast idle, it means the four’s maximum torque is instantly available – almost like an electric motor. Very little downward pressure on the accelerator pedal is needed to get the Atlas going smartly.

Counterintuitively, the four cylinder Atlas is more pleasant to drive than the V6-equipped version, at least in stop and go suburban/urban traffic – precisely because it doesn’t need to work as hard.

It’s possible to drive all the way to work – at the head of the line  – without revving the engine past 4,000 RPM. 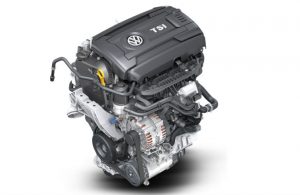 Because turbocharging isn’t what it used to be.

The principle is the same. Pressurize the incoming air, to stuff more of it into the engine. More air (plus more fuel) equals more power.

What’s changed is the time it takes to build that pressure – the turbo’s boost.

Engines like the VW’s 2.0 liter four have their turbo snugged up as close to the exhaust ports as possible – rather than farther downstream in the exhaust piping, as used to be typical. This is important because turbos build boost via the pressure of escaping exhaust gas, which drives a waterwheel-like device called a turbine (now you know where the name, turbo, came from). The turbine is connected via a shaft to the compressor, which does just that. 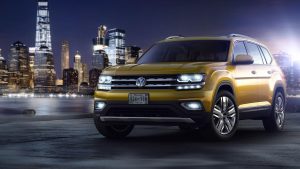 It compresses the incoming air charge, which pressurizes it.

In older-design turbos, you had to wait for the exhaust gas pressure to build before the boost came online. So you got lag – and then a surge.

Here, you just get going, without any turbo drama.

The main everyday driving advantage of the optional V6 is that the Atlas can pull more than twice as much as with the four. But if you don’t need to pull a heavy trailer – and don’t need AWD  – you may find the four suits your needs better.

It will definitely suit your pocketbook better.

Whether you go FWD or AWD the Atlas has 8 inches of ground clearance – a bit less than the Ascent (8.7 inches, highest in the class) and more than the Pilot (7.3 inches). 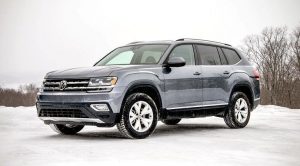 This is arguably as important a feature as AWD when the flakes fall – or rather, begin to accumulate. If your vehicle starts to ride up on packed snow, you’re going to spin wheels – no matter which wheels are powered.

The optional AWD system has driver selectable modes – including Snow, OnRoad, Offroad and Custom Offroad, each one tailoring throttle response and transmission shift points to optimize traction for those conditions.

The Atlas is about the same overall size as the Honda Pilot and Subaru Ascent, but its interior space is allocated differently.

Nominally, the VW seats seven people vs. as many as a theoretical eight in the Honda and Soobie. But the VW’s third row has noticeably more legroom: 33.7 inches vs. 31.9 inches in the Pilot and 32 inches in the Ascent.

It might not seem like much to read about it, but when you’re actually physically back there, it is. 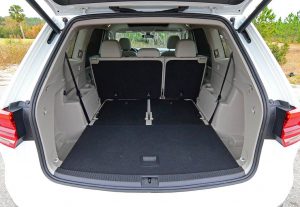 The seats can be individually moved forward or back through a range of 7.7 inches. If there aren’t any people in the third row, the people in the second row can avail themselves of more legroom than in the first row.

Those second row seats can slide and tilt forward, too – even with child seats installed. The 60/40 second row can also be replaced with a pair of individual captain’s chairs, if you prefer. 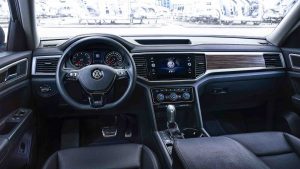 That, too, is a significant real-world difference.

You can load the Atlas with more stuff when it is also loaded full-up with people. In the Ascent and Pilot, you may have to pick one – or the other.

Another area of difference is the availability of a very slick-looking 12.3 inch full-flatscreen “digital cockpit” main gauge cluster. It ups the high-end ambiance considerably. It also lets you toggle through a variety of different displays. If you prefer a more traditional “needles and numbers” instrument cluster, you can have that, too. 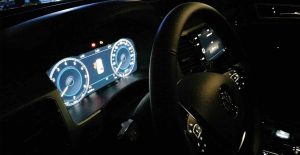 The available 12 speaker Fender/Panasonic 48 watt/12 speaker audio rig is very good, but even better are the VW’s seat heaters. German cars in general seem to have a hotter “hot” setting than Japanese and American cars. And they stay hot longer (others cycle off sooner).

A massage feature would make them perfect – but that’s not available  . . . yet.

All trims – including the base S trim – come standard with at least 18 inch wheels, four USB ports and a 6.5 inch LCD secondary touchscreen for the infotainment system.

SE and higher trims get a larger 8.5 inch screen.

VW offers an app called Car-Net that lets you lock/unlock the Atlas’ doors remotely, via your smartphone, as well as check fuel level and even give you directions your Atlas, if you forgot where you parked it.

The Atlas has ASS – automated stop-start. This is the annoying system almost every new car has – not because people buying cars are demanding it but because it helps car companies achieve microcosmic per-car MPG upticks that matter for purposes of CAFE (Corporate Average Fuel Economy) mandates.

ASS automatically shuts the engine off at every red light or whenever the vehicle comes to a stop. It then kicks back on – and that’s just the right word – when the driver takes his foot off the brake or pushes down on the accelerator pedal. While these systems have become less noticeable, they are still noticeable. Off and on and off and on and off and on –  maybe a dozen times (or more) on your way to work. And then back home again.

However many times you have to stop that’s as often as the engine will stop – and then re-start. 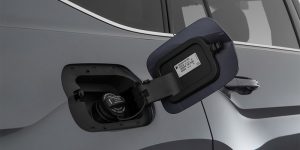 ASS is one of those individually minor aggravations that – cumulatively, begin to grate. There is also the absolute fact of much more load on the starter battery, which will therefore probably not as long – and cost you money. More money, probably, than whatever slight fuel economy gain is eked out by ASS.

Unfortunately, you can’t say no to ASS. And if you want to turn it off you have to push the button for off every time you go for a drive.

The other thing is that you have to feed the punchy little 2.0 liter engine premium unleaded to get the maximum horsepower and torque advertised. If you use regular, you’ll get a bit less. 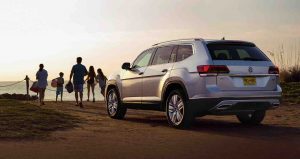 The V6 delivers its advertised horsepower and torque on regular unleaded.

Sadly, there’s no TDI diesel engine – for reasons of federal pedantry and vindictiveness. This is nothing less than tragic – and outrageous.

VW’s force-retired 3.0 liter turbodiesel V6 made 240 horsepower and a stupendous 406 ft.-lbs. of torque and went 5 miles farther on each gallon of fuel than the Atlas’ optional 3.6 liter gas V6, which only makes 266 ft. lbs. of torque.

Be sure to thank Uncle.