That car is considered by many to be the first muscle car, but what really made it significant – and copied – was that it was the first affordable high-performance car.

Prior to the GTO, most fast cars were expensive cars.

You generally had to be affluent – and thus, established (which almost always means older) to drive one. 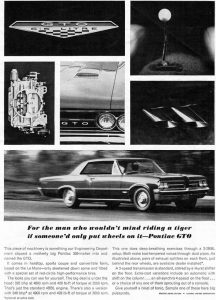 The GTO brought performance to the masses – particularly the young masses. Here was a V8 brawler that could out-accelerate the Ferraris of its time – but which a kid just out of high school or college could plausibly make the payments on.

It was basically a Tempest – Pontiac’s lightweight economy car of the era – fitted with a high-compression V8 and heavy duty underpinnings but without power windows, AC and leather seats – unless you added them.

But the GTO – and its emulators – didn’t survive the ‘70s, chiefly due to rising gas prices and the rising cost to insure any high-powered car, if you weren’t “established.”

The need for an affordable performance car had returned. 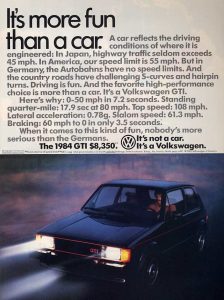 Like the GTO, it was based on a transportation appliance – in this case, the Rabbit.

Same basic idea that Pontiac had – just expressed in front-wheel-drive and four-cylinder form this time around. But exactly like the GTO in that it was quick, fun and most of all – affordable.

The GTO is long gone but the GTI thrives – possibly because in addition to all of the above, the VW was – and still is – practical.

It can be a family car as well as a performance car. There’s horsepower – and room.

It’s an economical car, too. 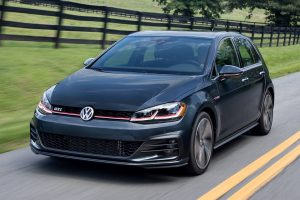 The GTI is a hotted-up version of VW’s popular Golf five-door hatchback.

The hotting up centering around the latter-day equivalent of a high-compression compression 389 V8 with three carburetors , a four-speed close-ratio manual transmission, Hurst mags and splitter exhaust tips.

Well, you won’t get that – but you will get this: 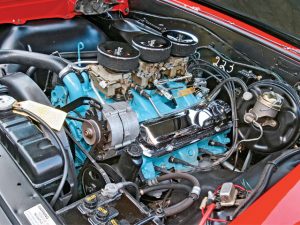 Plus 32 MPG on the highway – about twice the mileage delivered by a V8 GTO.

A top-of-the-line Autobahn trim comes with all of the essentials plus an adaptive suspension, 8-inch LCD touchscreen, climate control AC and a very nice Fender surround sound audio system (much better than the GTO’s AM radio with “reverb”) stickers for $35,995.

All 2019 GTIs get upgraded brakes and a limited slip axle. 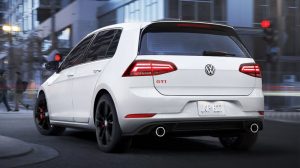 Doesn’t take up much room.

“It wasn’t me” appearance. 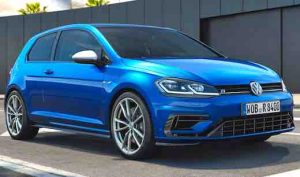 High-performance 40-series “summer” tires are only available with the highest-price Autobahn trim ($35,995 to start).

You must use premium unleaded to get the full advertised horsepower.

If you buy the automatic transmission, you’ll get ASS – Automated Stop/Start.

Unlike the Golf on which it’s based, the GTI comes standard with a 2.0 liter, 228 horsepower engine rather than a 1.4 liter 147 hp engine. 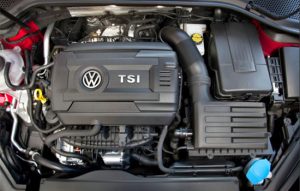 Interestingly, this big difference in power – and speed – does not come at the expense of mileage.

Not much expense, anyhow.

The new Golf – which is much less powerful this year than last year – rates 29 city, 37 highway.

The new GTI – which is 8 horsepower stronger than it was last year – rates 24 city, 32 highway with the standard six-speed manual. That’s a 5 MPG sacrifice in exchange for an 81 horsepower upgrade and more than two seconds off the 0-60 time. 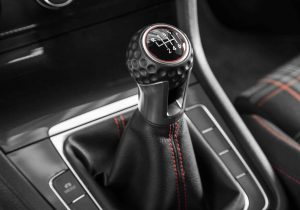 Even if gas cost $4 a gallon, driving the GTI wouldn’t break the bank vs. driving (much more slowly) the new Golf.

The GTI’s optional seven-speed automated manual doesn’t change the MPG equation very much vs. the shift-it-yourself six-speed manual. It just shifts it around some.

This is a kind of reversion to form. In the past, the manual-equipped version of a given car would usually be the more fuel-efficient version – assuming driven by someone who knew how to drive a manual-equipped car – because of the direct, mechanical connection between the engine, transmission – and the road. 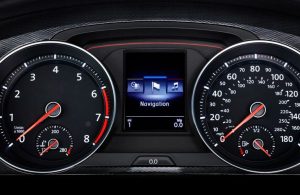 The slippage which enables an automatic-equipped car to remain in gear while not moving also meant an efficiency loss – and that reflected in a mileage loss.

In recent years, automatic transmission slippage has been decreased via lock-up torque converters – which establish a mechanical connection between the engine, transmission and the road  . . . once the car is rolling (you still have to have a little slippage when the car isn’t rolling – or the car would stall out just like a manual car left it in gear with the clutch out).

Modern automatics are also typically programmed to upshift in such a way as to maximize the MPGs.

In this case, the automatic is programmed to maximize acceleration.

Which, for the record, is tops in its class. 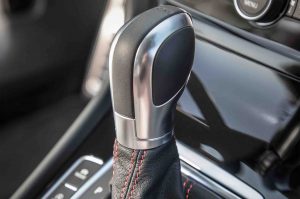 The one for “established” performance buyers.

There was the Ford Focus RS – but it’s kaput. Cancelled. RIP. In the history books, along with the GTO.

Along with the MazdaSpeed3 – the speedy version of the Mazda3. Also RIP. 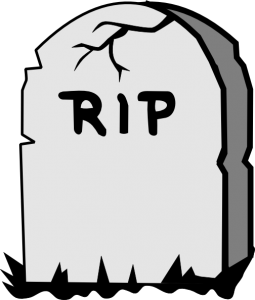 There is the just-updated Soobie WRX – which is packing more under its hood than the GTI – 268 hp from its 2.0 liter turbo’d four. But it’s a dead heat on the 0-60 score card.

It’s also AWD – and so a different kind of performance car.

The most credible threat to the GTI is probably the Hyundai Veloster turbo – which starts just under $23k, making it even more affordable than the VW.

But, the Veloster is a three-door-only deal – with back seats only Dick Cheney could love.

These emulators all have their merits. But the GTI encompasses them all. 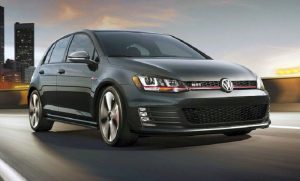 The GTI is not only quicker than its price-comparable competitors, it is quicker than the car which inspired it.

See here, if you disbelieve.

Part of the problem – back then – was of course traction. The GTO’s big V8 had to channel its power through very small – very narrow – tires. Those 14×6 Hurst mags looked great – and were great for frying the tires. But traction was terrible and if you haven’t got that, you’re not getting going.

The GTI has fantastic traction.

In part because it’s front-wheel-drive. The rear-drive GTO was light in the rear – compounding the traction deficit of tires skinnier than what you’d get with a new Prius.

It – the VW – practically bunches up the pavement like a cat clawing the carpet. Eighteen-inch wheels make a difference. The poor old GTO would probably have made it to 60 in six seconds if it had been able to hook up the power under its hood.

There is another, more important difference.

Unlike the GTO – which was a brutal car – the GTI is an easygoing car. The ride doesn’t beat you up and the standard heated seats – a feature no classic GTO offered – are easy on your back. The manual version’s clutch take-up isn’t abrupt, which makes it pleasant to drive when you’re stuck in traffic and having to stop – and start – constantly.

This latter number is about 1,500 RPM lower than is typical for high-powered fours and probably accounts for the GTI’s impressively quick 0-60 run. Less time spent revving means less time waiting in between shifts. It also means excellent performance everywhere, anytime. 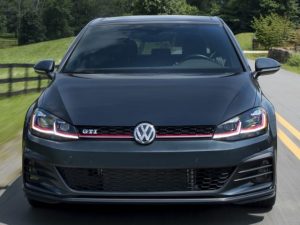 The VW is never lacking for motive power, either down low – or up high – or in between.

Like the Golf, the GTI also benefits from excellent visibility to the rear and sides because of its boxier rather than hunched-over posture. Its very tight exterior dimensions – the whole enchilada is just 168 inches long, bumper to bumper – make it exceptionally agreeable in close-quarters driving.

It fits in parking spots off-limits to others – including cars like the WRX (180.9 inches long, almost a full foot longer). 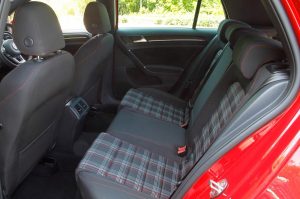 The GTI is very compact – on the outside.

But it is also very roomy – on the inside.

Especially with regard to headroom in both rows – which is due to its tall and boxy roofline.

That’ll put a crick in your neck. 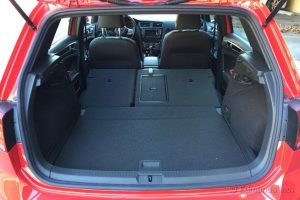 Assuming you can get back there at all.

The Veloster is a three-door so you’ll have to walk around to the passenger side, where the one rear door is situated, then duck (the Hyundai’s roofline is 55.1 inches off the ground vs. 58.2 for the VW) and scrunch (backseat legroom in the Veloster is 34.1 inches; the VW’s got 35.6 inches of legroom).

The Veloster is a fun car, but it’s implausible as a family car.

The VW’s taller – and flatter – roofline also opens up an equally impressive amount of cargo room. With the back seats folded, the GTI has 52.7 cubic feet of cargo space – significantly more than the Veloster’s 44.5 cubic feet. And – again – it’s more useable space because it’s more accessible space. 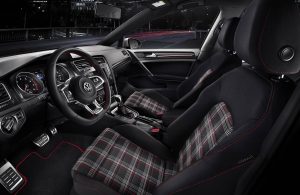 With the back seats up, you’ve still got 22.8 cubic feet of cargo space available – which is much more “trunk” than any classic-era GTO could boast of and by today’s standards, most classic-era GTOs would be considered full-size cars.

Unlike the GTO – which was affordable in part because it was spartan – the GTI isn’t.

Though you can get tartan-patterned cloth seats, if you like.

All trims come with the previously mentioned heated seats standard, as well as a leather-wrapped sport steering wheel, ambient interior mood lighting, a 6.5 inch touchscreen and both Android Auto and Apple Car Play.

SE trims are available with the previously mentioned adaptive suspension, which makes the GTI even more enjoyable to drive either full-tilt or in stop-and-go traffic. You’ll also get the upgraded Fender eight-speaker audio rig. 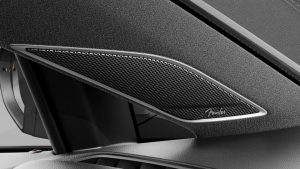 VW does not – yet – offer the digital cockpit available in other models, including the all-wheel-drive Golf R. But analog gauges work perfectly well – and they help keep the GTI’s price tag affordable.

VW sells a three-door GTI in Europe but won’t be selling that version here. This is probably sound policy because the five-door hatchback layout helps the GTI keep a low profile. People who know fast cars know that it is – but as far as the rest of the world is concerned  it’s just another Golf.

This is good for getting away with using the GTI.

If you want the maximum handling grip offered by the “summer” tire package, you’ll have to buy those tires over the counter  . . . unless you buy an Autobahn GTI. It’s the only trim VW will sell you with the grippiest tires installed at the factory.

This is a shame, but at least easily correctable. 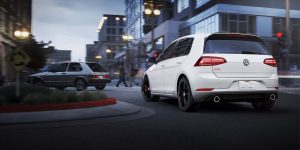 The GTI’s rivals have kidney-killing rides or torturous back seats or just cost too much –  problems  that aren’t easily correctable.

If the GTO had made as much sense as the GTI, it might still be around.