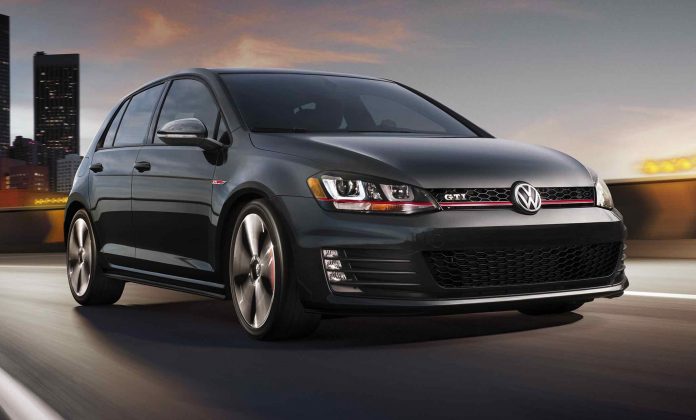 The  VW GTI hatchback sedan doesn’t look like a Corvette, but it reminds me of one.

Not a new one.

The GTI has a 220 hp engine. So did my friend’s Corvette. 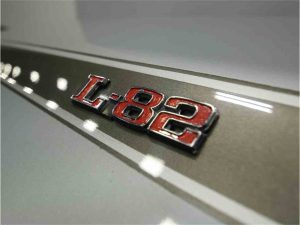 This is interesting given the VW’s engine is a 2.0 liter four and only about a third the size of the Corvette’s 5.7 liter V8.

A gulf of 40 years separates these cars.

And yet you end up with something similar. 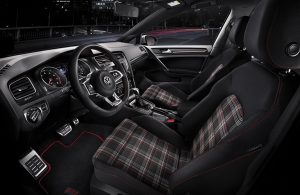 The GTI is a hotted-up version of VW’s popular Golf four-door hatchback – though not quite as hotted-up as the 292 hp and all-wheel-drive Golf R hatchback (reviewed separately, here).

It comes with a larger, more powerful 2.0 liter turbo four in place of the Golf’s 1.8 liter four – along with upgraded wheels and tires, high-capacity brakes, dual exhaust, a sport-tuned suspension and different exterior/interior trim.

Base price is $26,415 for the S trim with a six-speed manual transmission.

With the available six-speed automated manual (DSG) transmission, the price rises to $27,515. 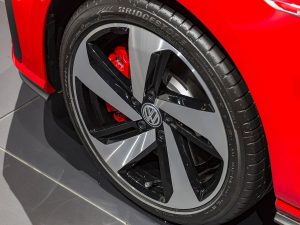 A top-of-the-line Autobahn edition with an adaptive four-mode suspension, larger diameter rear stabilizer bar, navigation, automatic climate control and trim upgrades stickers for $35,070 with the manual transmission and $36,170 with the automated manual transmission. One can always lower the costs with their amazing deals.

The main cross-shops now that the  MazdaSpeed3 is no longer available are the Ford Focus ST and Honda Civic Si – both of which come only with a manual transmission.

And the Subaru WRX.

The Honda is available three ways: You can go with the two-door coupe, three-door hatchback or the sedan.

All GTI trims come standard with the 220 hp engine upgrade which was optional last year.

SE and Autobahn trims get a larger LCD touchscreen and LED headlights.

As much power – and better performance – than a ’78 Corvette, with twice-plus the seating capacity (and gas mileage).

Four door/hatchback layout is practical. Plenty of leg, head and cargo room. The WRX sedan has a small trunk. 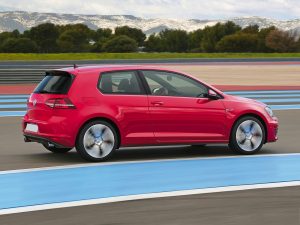 Subaru WRX comes standard with AWD; the GTI and all the others come only with FWD. 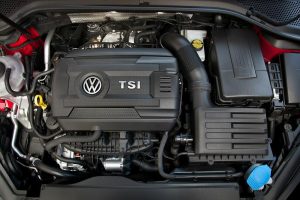 Either way, the GTI is the speediest car in its class . 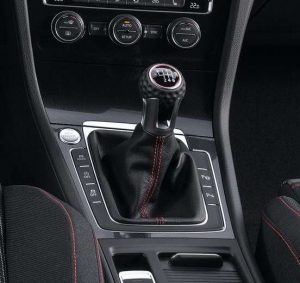 The why has to do with weight.

The Subaru – which weighs a stout 3,272 lbs. (vs. 3,031 lbs. for the GTI) has the excuse of being AWD. The extra driveline parts bulk it up vs. the FWD-only VW and also give it a handling and traction edge.

Nearly as heavy as my high school friend’s Corvette – which weighed 3,500 lbs. – and the ‘Vette had the excuse of a massive (and massively heavy) cast iron V8 engine under its hood. 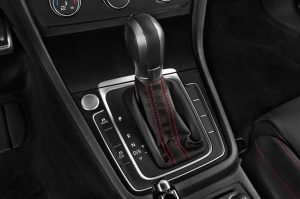 Interestingly, the VW’s best gas mileage rating (25 city, 33 highway) is achieved with the manual transmission – as used to be the case generally – but is generally the opposite now.

Usually – in a new car – the automatic-equipped version will score higher on the EPA’s test loop because it can be programmed to the test.

It doesn’t necessarily mean the automatic will deliver better MPGs in the real world – especially if you know what you’re doing with a third pedal.

But the car is quickest with the automated manual – and you get rev-matched downshifts, too. 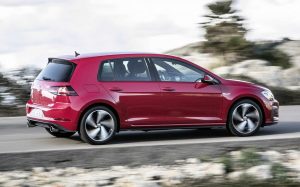 No matter which way you go, you’ll get a 13.2 gallon gas tank – which gives you about an extra gallon of gas vs. the Ford’s just over 12 gallon tank, which works out to an extra 50-ish miles of range in between fill-ups when you also take into account the Ford’s 22 city, 30 highway mileage rating.

The new Civic has the smallest tank of the bunch – 12.4 gallons – but its gas mileage is also the highest of the bunch and not by just a little bit: 28 city, 38 highway.

That’s within 2-3 MPG of the mileage you get out of the best economy cars currently available. 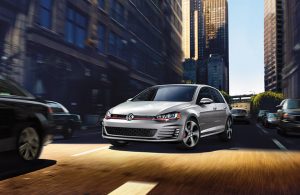 It’d be interesting to teleport back to 1986 and line up the GTI against my high school friend’s ‘Vette.

If the VW’s turbo four were about the same size as the V8 in my buddy’s Corvette, it’d be making in the neighborhood of 640 hp. That’s a measure of how much they’re squeezing out of little engines today. And how little they were squeezing out of big engines back when I was in high school in the ’80s.

Squeeze, by the way, is just the right word.

The GTI’s turbo pumps as much as 30 psi of pressurized air into the 2.0 liter four. That’s a whole lot more air than a four barrel Quadrajet could suck down into the cylinders of my buddy’s 5.7 liter 350. 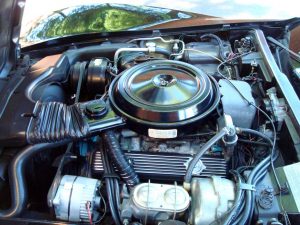 You can watch the boost build by pushing the “car” button on the right-hand side of the LCD display; this dials up a digital three-pack accessory gauge cluster, which also includes a lateral G meter to measure cornering forces.

But you’ll know by feel that this is a big boost engine. Hit it and the tires claw the asphalt like a bear trying to rip open a mummy bag full of sleeping camper.

All the way through second gear, it’s a tussle for traction.

This thing does a better burnout than my friend’s ’78 Corvette.

Which is also a function of the torque it makes. 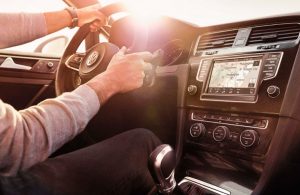 Which means no waiting around for things to happen.

Modern turbocharged gas fours like the GTI’s use quick to spool up “twin scroll” turbochargers that do not need a moment (or three) to gather breath and build up the boost – as used to be the case with turbocharged engines. The power – torque and horsepower – are there, right now.

No waiting. Lots of going.

Now you get all three things – plus the four’s almost-economy car gas mileage.

If, of course, you can drive it like an economy car. Which is a rough assignment. 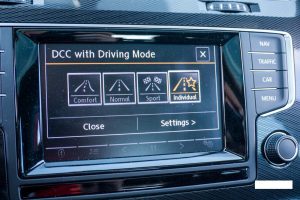 My test car had the four-setting (Comfort, Normal, Sport, Custom) adjustable suspension – which you get if you spring for the top-of-the-line Autobahn package. It’s a big jump in price from the base S and even the SE and Sport to the Autobahn version of the GT, but being able to instantly tailor the car’s ride quality from Comfort and Normal settings to Let’s Rock (it’s not called that but could be) is not only nice, it’s something you can’t do in the Focus ST, which does not even offer the option of an adjustable suspension. The Ford’s seats are also more focused. They are great for track days, not so great for the daily commute.

Probably that – plus a very cramped back seat, which we’ll get into below – explains why the ST hasn’t sold sell nearly as well as the GTI, which is superior as both a performance car and an everyday car. 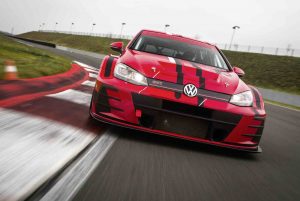 The AWD-equipped Subaru is the only snow-day car of the bunch. But, you can’t burn rubber or chirp the tires changing gears.

The AWD Soobie is more controlled. The VW is more fun.

You can still see the Rabbit underneath all that Golf.

Actually, the Rabbit was a Golf – everywhere except the United States, where VW figured that “Rabbit” sounded more marketable. Then it became Golf here, too. 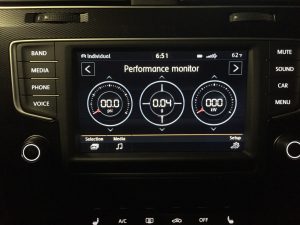 And the GTI is a Golf with Goodies, most of them mechanical and not obvious – which is good in the same way it’s desirable to not have white powder under your nose when you walk past a cop.

What’s not debatable is the VW’s space-efficiency vs. several of its rivals but especially vs. the Focus ST.

Even though the ST is a larger car – 171.7 inches bumper to bumper vs. 168 inches for the GTI – the Ford’s back seat is much tighter: 33.2 inches of legroom vs. 35.6 in the GTI. Although both cars have about the same headroom in both rows, the VW’s taller/boxier profile and big car doors makes it seem like there’s more because you don’t have to duck as much to get in. 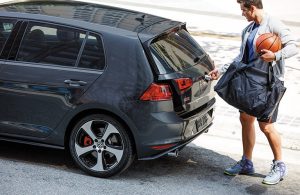 Both the Ford and the VW have about the same room for cargo behind their second rows – 23.8 cubic feet and 22.8 cubic feet, respectively – but the VW has a bit more total capacity: 52.7 cubic feet with the second row folded vs. 43.9 for the Focus.

The Civic beats them all, though. It has 42.3 inches of legroom up front and 37.4 inches in the back – plus you can buy the two door, three-door or the four-door. 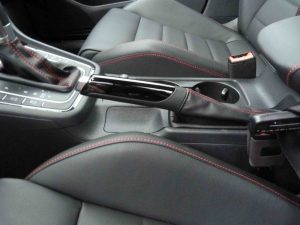 One small item worth a big mention is that the GTI still has an emergency brake lever – as opposed to a parking brake button. This means you will have the ability to stop the car if the engine dies – because a pull-up emergency brake lever is not dependent on electricity, as the “e” brake is.

Also – and let’s be honest, far more important –  you can use a pull-up emergency brake to lock the rear wheels, which is essential for doing certain high-performance maneuvers.

It’s becoming as hard to find pull-up emergency brake levers that allow the driver to manually control the action as it is to find ashtrays in new cars. Part of the reason for this is the demented obsession with electrifiying and gadget-izing everything, including things that arguably work better (and certainly with less complexity and cost) when they are simple mechanical things. 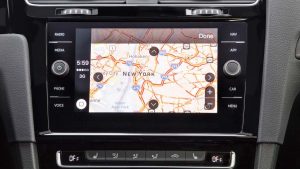 The standard  GTI’s flush-mounted secondary LCD touchscreen is handsome to look at and also among the easier-to-use units on the market. It also has features others haven’t got, such as being able to pair two Bluetooth devices at once and a kind of gesture-control feature similar to BMW’s that recognizes hand waves and makes displays larger or smaller just by waving your hand at the screen. 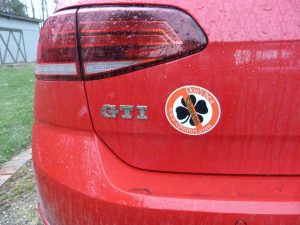 Also: The USB port is located where it can be seen – and reached – ahead of the shifter, at the bottom of the center stack – and not hidden inside the center console storage cubby.

It’s surprising how poorly located such an essential hook-up is in a not-small number of other cars.

There’s no Quadrajet moan as the secondaries kick in – because there aren’t any secondaries.

But 30 pounds of boost is a not-bad replacement for yesterday’s displacement!