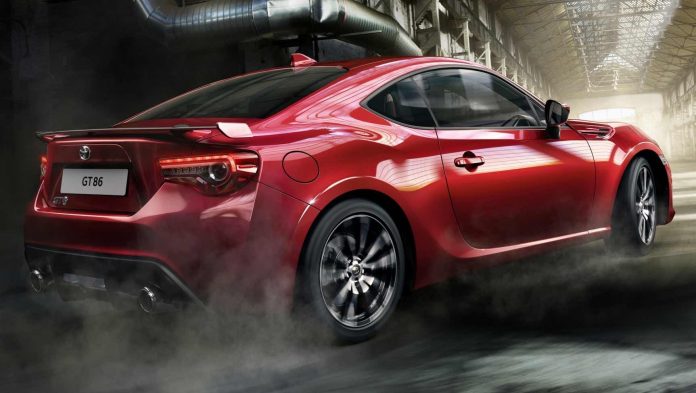 It’s an interesting thing about the Toyota 86 – and the Subaru BRZ.

Not that they are basically the same car sold two different ways. The curious thing about both – and what they have most in common – is how different they are from every other car their respective brands sell.

The BRZ, for instance, is the only car Subaru sells that isn’t all-wheel-drive. And which has just two doors. 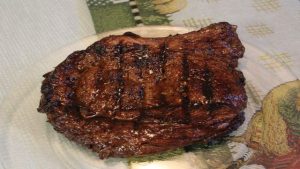 Toyota’s cars are all front wheel-drive – and have at least four doors. Except for the 86.

It’s like trying to sell a ribeye to vegans.

But that doesn’t mean it’s not one hell of a steak.

The 86 – and its Subaru-badged doppelgänger – are nearly identical but differently badged (and priced) versions of the same hardtop, four-seat sports car jointly developed by Toyota and Subaru. 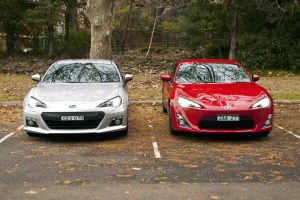 Mechanically, they are both Subarus – each powered by the same Subaru-built 2.0 liter flat (horizontally opposed cylinders) four, with cosmetic, trim – and pricing structure – accounting for most of the meaningful differences between the two.

And it doesn’t have heated seats. The 86 GT does. Plus a few other things the Subaru-badged version doesn’t. 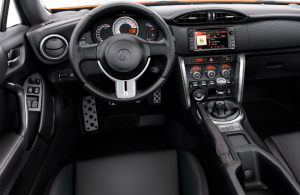 On the other hand, the BRZ is available with performance enhancements that aren’t (yet) available with the 86, including STI-tuned Sachs shocks and 18-inch wheels with Michelin Pilot summer tires, high-capacity Brembo brakes and a carbon fiber rear wing.

Of course, all those parts could be purchased over the counter and easily added to the Toyota-badged version, if desired.

Either way, either car is an interesting alternative to the two-seater (and soft-top) Mazda Miata roadster, which is otherwise very similar in layout and the main cross-shop for both, as their prices roughly overlap. But not everyone wants a convertible soft-top, which is more vulnerable to weather – and to vandals and thieves – than a hardtop. 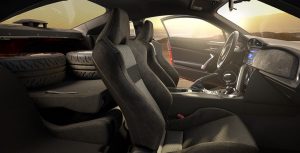 Some people also need the extra pair of seats – which the two-seater Miata hasn’t got.

The Twins can and should be considered by anyone considering higher-priced stuff such as the Porsche Cayman – which is a fantastic sports car but comes with a fantastic price to match. 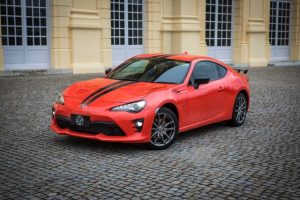 Just as Subaru has jazzed up the BRZ with the new-for-2018 Performance Package (the Brembo brakes, STI-tuned suspension, etc.) Toyota now offers the 86 GT package – which is a different package. 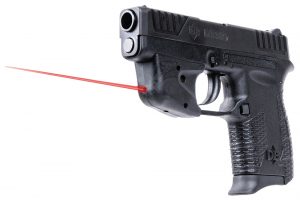 Stronger – and freer-revving – engine than in the Miata.

Traction control turns all the way off. Not partially off. 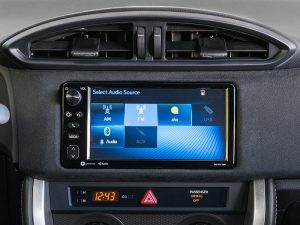 Mazda Miata is also fun – and even more affordable.

It’s not a convertible – a problem if you like dropping the top.

About 450 pounds heavier than the Miata – which scrubs speed off the 86’s 50-something horsepower advantage.

86 doesn’t offer the performance enhancements now available with the BRZ.

The 86’s engine is unlike any other Toyota engine – because it’s designed and built by Subaru. 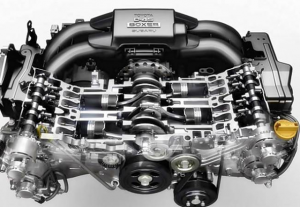 It’s a 2.0 liter flat four – the cylinders horizontal rather than the usual vertical and arranged in pairs facing each other across the crankshaft. The advantages are several.

First, the engine’s weight sits low in the car’s chassis. In-line (and upright) engines sit high, their weight sloshing around more when the car corners, which must be tamped down by the suspension.

The weight is also not spread out – as it is in the 86 (and the BRZ), in which half the engine  sits on one side of the car’s centerline, the other on the other half of it – perfectly equally distributed between the halves.

There is also less weight – because the horizontally opposed four is naturally balanced and so doesn’t need a heavy external balancer. 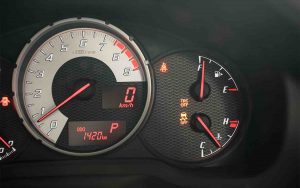 The two (well, three – if you count the 86, its Subaru twin and the Miata) all get to 60 in about the same low-mid six seconds, but the Twins get there very differently. More on this in a moment.

Gas mileage is another difference.

An interesting difference, because the Twins are mechanically identical. But gas mileage isn’t. 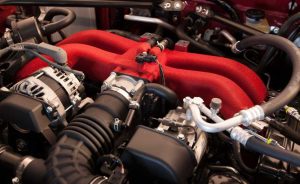 How does the Subaru squeeze out that extra mile per gallon?

The car, that is.

Which is a big difference.

You have to drive this car – as opposed to putting it in Drive. The engine is happiest when you rev it.

But that is your reward – the point of the thing.

Why would a person choose to buy a two-door race horse such as this and then use it like a farm donkey? But these are public roads! Do not attempt. Trained driver on closed course!

You know the reason why you’re thinking about a car like this – and it’s a different reason than the reason people buy Camrys (or Imprezas). 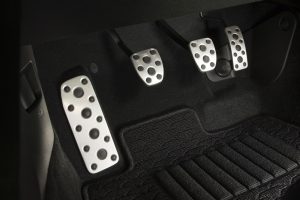 So, go ahead. Blip the throttle. The Subaru boxer engine clears its throat, also in a different way. The boxer four makes a very unique, very gnarly sound. If mechanical things were living things, this would be a Wolverine, perhaps. There’s a rough snarl to it, the beast giving you a glimpse of its teeth. You get the sense that, with each exhaust pulse, the engine is hoping to force out bits and pieces of the catalytic converters the government tries to choke it with.

The clutch is light; the car won’t stall out if you ease into it.

Contrary to what you may have read, the car is traffic-friendly. Unlike, say, the late great Honda S2000 – which was a car you drove all out or not, with nothing on the bottom – but a mechanical G Spot at around 6,500 RPM all the way to 9,000-plus. 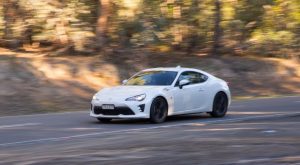 This car splits the difference between that and the Miata.

It has enough torque below 4,000 to be comfortable to drive in stop-and-go traffic. It is not necessary to wind the thing up like a crotch rocket sport bike just to get it moving. The 4:30 gears provide the necessary leverage to get you going in a casual way, if you like.

But it has that G Spot up high.

And you’ll want to hit it.

As in the Miata and other focused cars, there is much less emphasis on things besides the business at hand – which is to drive this thing. The display for the audio system is relatively small and seems to have been designed in grudgingly. It would be easy to live without it, because there are other things to do in a car like this than tap apps and scroll through menus.

You can turn the traction control and the stability control all the way off via a button behind the gearshift lever. Not partially off, or “reduced.” Zero electronic interference. Now if only it had a button like that for the ABS . . . 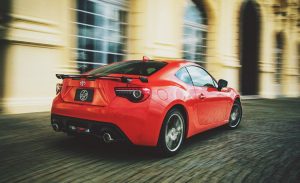 It does have an emergency brake – not a parking brake, electronically activated by solenoids and motors. This one’s a lever, activated by hand – and when you pull that lever up, the car does not squawk. No buzzers, no beeps. The people who designed this car know perfectly well why you might pull up the lever with the car in motion – as opposed to when it’s stopped.

It’s a delicious bit of heresy, a jab – however furtive – at the Safety Cult and its mantras.

We may have to pretend we love Big Brother, but the truth is not all of us do. 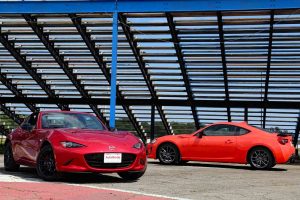 This gives the Miata an advantage in terms of snarking through traffic – and into parking spots. It is definitely the more intimate car; a car you almost literally strap on as opposed to strapping into.

But the additional car you get with the 86 (and BRZ) gives you additional space – which for some will be a difference that makes all the difference.

And not necessarily for people-carrying reasons.

The 86’s back seats can be folded forwarded to create a level load floor that passes-through to the 6.9 cubic foot trunk – effectively tripling the available space and giving you enough space to haul a spare set of tires, for instance. You might be able to get a bicycle in there, too. Many things that would never fit inside the Miata’s 4.6 cubic foot (yes, you read that correctly) trunk, which can’t be expanded into the interior area because there’s nowhere there to expand it. 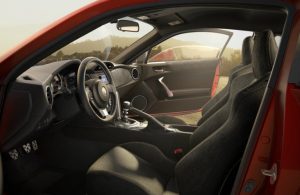 On the hardtop vs. convertible thing:

The main advantage – aside from the wind in your hair – of the convertible is that with the top down, visibility is as good as it is perched on a motorcycle. Better, actually- because the law doesn’t yet require car drivers to wear peripheral vision-occluding helmets for saaaaaaaaaaaaaaafety. In the 86 and the BRZ, you are enclosed – and your peripheral vision is restricted similarly. Not because of a helmet but because of the coupe’s dramatically rearward tapering roofline and the sail panels that support it on either side.

On the other hand, when it rains the hardtop doesn’t leak. And won’t 15 years from now. Metal doesn’t shrink. Fabric does. It also tears – or can be, easily. All it takes is a switchblade. 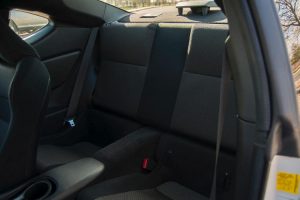 And to-the-side and to-the-rear visibility in the hardtop is better vs. the convertible with its top up.

One area where there is no difference at all between the Twins and the Miata is leg – and head – room for the driver and front seat passenger. All three have the same 41.9 inches of legroom and 37.1 inches of legroom.

The Miata has zero inches of both.

This is a simple car, as modern cars go. There are only two options available – other than the optional automatic transmission. They are all-season tires in place of the more aggressive sport tires that otherwise come standard – and the DisplayAudio 7 inch touchscreen with upgraded (eight speaker) HD stereo, navigation and a suite of apps, including Aha Radio and Gracenote album cover art. 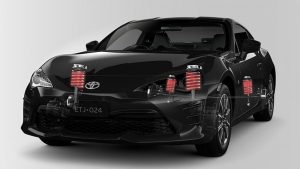 All trims come standard with the expected necessaries – power windows and locks, cruise control, AC and some not-expected but nice things, such as a Torsen limited slip differential and the already mentioned 4.30 axle ratio. These performance enhancers are often optional even in sporty cars.

The Miata, for instance. To get a limited slip rear axle, you have to pay extra for the Club trim. But this also gets you upgraded Bilstein shocks, a strut tower brace, and additional suspension tuning.

It’s hard to grok why Toyota decided not to offer similar enhancements, especially when Subaru does. 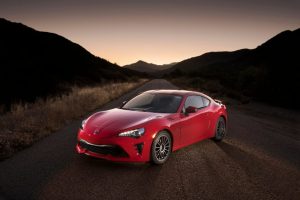 But – while it’s a less convenient than ticking off an option – you can upgrade your 86 to BRZ Ts specifications, by purchasing the Brembo brakes and other goodies over the counter and installing them yourself.

You’ll end up with the identical factory-engineered performance enhancements.

You sometimes find outstanding things in places you didn’t expect to.