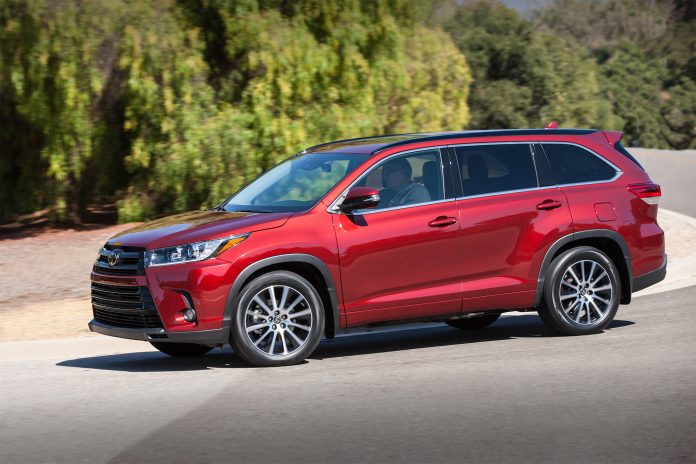 First of all, there are no turbos.

That fact alone sets the current Toyota Highlander apart from almost all other mid-sized crossover SUVs – most of which either come standard with or offer turbocharged engines.

Neither of the Highlander’s two available engines is hooked on boost – which means neither one will ever cost you money, post-warranty, to fix or replace turbos, intercoolers and related peripherals.

Peace of mind, that.

The Highlander comes standard with a large (2.7 liter)  four rather than a smallish 2.0 liter one – as is becoming common in other vehicles – jump-started by a turbo. It also offers a large V6 – a type of engine that some in this class – like the Mazda CX-9 – no longer even offer and which is being pushed off the stage in favor of small, turbo-boosted fours for reasons of fuel economy uber alles. 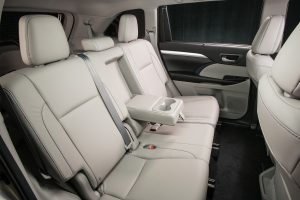 There are also three rows of seats – and room for eight – without the size 15XX exterior footprint of physically larger rivals like the Chevy Traverse and Ford Explorer.

On the downside, the Highlander’s no-turbo-four is weaker (and thirstier) than rivals’ turbo’d fours.

And to get AWD – you have to buy the optional V6 first. 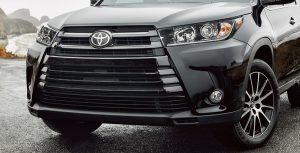 The Highlander is a mid-sized, three-row crossover SUV. Like the models it competes with, it’s basically a high-riding car with an available light-duty AWD system rather than a truck-based off-roader with 4WD (and low-range gearing).

It’s smaller on the outside than others in this class but has comparable passenger and cargo room inside.

It offers two engines – one of them a V6 – and neither of them turbocharged. Most of the others in this class have turbo’d engines and some don’t offer a V6 at all. 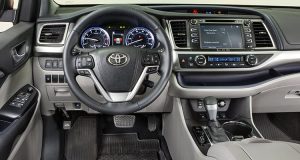 Prices start at $30,630 for a base trim/front-wheel-drive Highlander with 2.7 liter four cylinder engine, sans turbo.

There is also a hybrid version of the Highlander. Prices for that version (which comes standard with the V6, plus a supplemental battery pack/electric motor) start at $36,270 and top out at $47,880. 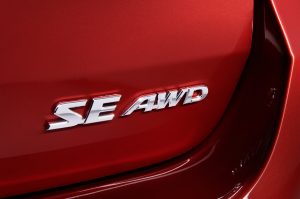 The Highlander’s optional V6 is more powerful (295 hp vs. 270 before) and gets better gas mileage; it is paired with a new eight-speed automatic vs. the six-speed automatic used last year.

All Highlanders get an exterior styling refresh, including a new grille and headlight design.

Better packaging than competitors; the Highlander is as or more roomy inside for the first and second row occupants, but not as big outside – so it’s more manageable in tight spots and easier to park.

Available all-wheel-drive system can lock the power split 50-50 front to rear, very much like a truck-type 4WD system. 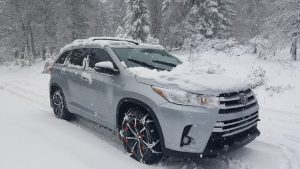 Eight inches of ground clearance – more than most in this class.

AWD isn’t available with the four cylinder engine; you have to upgrade to the V6 to get it.

Honda Pilot comes standard with a similarly powerful V6 – no turbos – has more standard towing capacity and has a roomier third row. 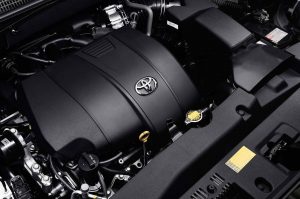 The Highlander is one of the few vehicles of its type (and otherwise) that does not come standard with a turbocharged engine. This is because its 2.7 liter engine predates the latest round of federal fuel economy fatwas – which are becoming impossible to comply with unless the engine is radically downsized.

Turbos are added to these small engines – which would otherwise be too small for the vehicles they’re put in – to make up for the reduction in engine size when the driver needs the vehicle to move.

On comes the boost.

The rest of the time – so the theory goes – the smaller engine will use less fuel.

But not a lot less. 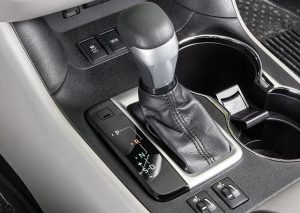 And that’s purely on paper – based on the EPA’s test loop. The more you’re on boost, the less the mileage in the real world. I’ve driven all of these and found the only way to match the rated mileage is to drive as if you had all the time in the world to get going – and almost never get going faster than 65 MPH. 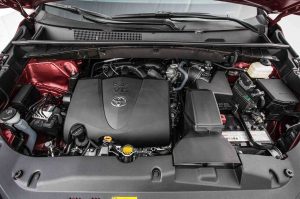 The upside is they’re quicker – and not negligibly. It takes the 2.7 liter Highlander about 9 seconds to get 60, about 2-3 seconds behind the turbo four-equipped competition.

On the downside, turbos cost more money – both to buy (the turbocharged rivals have higher sticker prices) and – possibly – to service.

Turbos operate in a hellish environment of high heat -and very high speed. The internal fan (impeller) that compresses the incoming air spins at thousands of RPM on a shaft that must always be exactly straight; the slightest wobble due to wear or an imbalance due to crud build-up and it’s hello big repair bill.

The no-turbo 2.7 liter Highlander may not be as punchy, but it’ll never present you with a $3,000 work order for a new turbo. 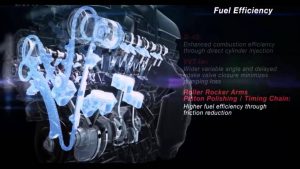 So equipped, the Highlander’s 0-60 time drops to just over 7 seconds. Mileage with this engine is 20 city, 27 highway for the FWD-equipped version, which is slightly better than the 2.7 liter-equipped version. Toyota says credit for the mileage uptick is due chiefly to the new direct-injection fuel delivery system and the new eight-speed automatic that is paired with the V6.

The standard 2.7 liter four is paired with a six-speed automatic.

If you buy the V6, you can buy all-wheel-drive to go with it. This system normally operates in FWD mode – with 100 percent of the engine’s power going to the front wheels only, in order to maximize fuel efficiency. If the front wheels begin to lose traction, power is automatically routed to the rear wheels as necessary.

The driver can lock the split 50-50, front to rear, via a dash-mounted button. 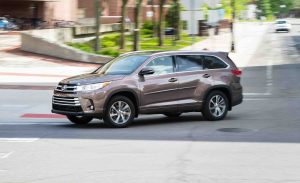 What are the criteria when dealing with appliances?

Several of the contenders in this class tout sporty handling (CX9) or acceleration that would shame Magnum, PI’s Ferrari (the opening credits burnout scene is done on wet grass for a reason). Ford’s Explorer, when fitted out with its optional twin-turbo V6, is a bullet.

But those two turbos…

A great thing in a high-performance car. But a family hauler?

The Highlander’s standard four has enough power – just not an abundance of power. Its chief negative is that you can’t get it and get the available AWD system. Toyota – like may other companies – packages one desirable thing (AWD) with another (the V6, in this case) to shake more coin out of your pockets.

Still, the inside deal is that you can do a lot with a FWD anything. Especially if it has lots of ground clearance, which the Highlander does. (The Mazda CX-9 is one of the few in this class that has more standard ground clearance: 8.8 inches vs. 8.0 for the Toyota. The Honda Pilot has less – 7.3 inches.)

AWD is nice, but oversold. You pay a lot more to get it, more at the pump and may pay more down the road, to maintain and service it.

With the V6, you’ve got an abundance of power.

We’ve grown insouciant about this. In the Magnum, PI era, it would have staggered the entire car press to present them an eight-passenger, 4,200 pounds-plus family bus that could get to 60 in just over 7 seconds.

Chiefly because today’s high-performance cars routinely get to 60 in just over 4 seconds. 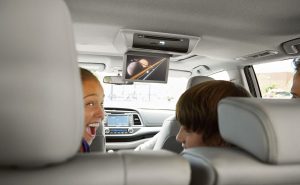 But it’s not a Mad Max world out there, yet. For everyday purposes, the base 2.7 liter four will suit while the V6 ought to more than suit. It is exceptionally quiet. So quiet you notice the absence of sound. Toyota excels at this. That and general plushness – of seats and ride in particular. It’s easy to imagine yourself in a larger/higher-riding Camry or Avalon.

Which is pretty much what you’ve got here.

The Highlander’s turning circle is a bit tighter than most in this class. And its less unwieldy dimensions make it a much more agreeable chariot in the suburban environment it was designed for. 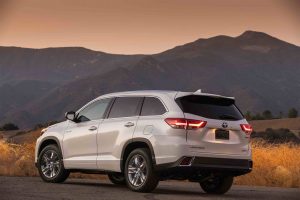 It’s a big jump from a two-row/five-passenger crossover SUV to one with three rows and room for as many as eight.

To make all the space inside, the usual practice is to make it bigger on the outside. The just-redesigned/2018 Chevy Traverse is a good example of this. The thing is 204.3 inches end to end now – which makes it longer than a Chevy Tahoe.

Which is a full-size SUV.

You get three rows – but you also have less room in your garage. And to maneuver out there in the world.

The Highlander manages to be both big – in terms of interior space – but not too big on the outside. 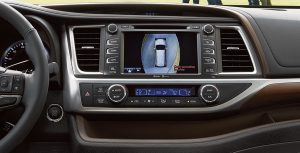 But like the Traverse, you get more than just the extra seats.

Legroom in the Highlander’s first two rows stacks up well vs. the bigger-on-the-outside crossovers: 44.2 inches for the driver and front seat passenger, 38.4 inches for people in the second row. 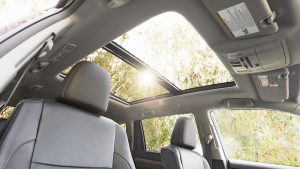 The Explorer has 42.9 inches of legroom up front, 39.5 in its second row. The Traverse only has 41 inches up front and 39 inches in the second row.

The others do have more third row legroom, though – especially the Traverse, which has class-best 33.7 inches. Ford’s Explorer comes in third, with 32 inches in the third row; the Pilot is very close behind, with 31.9 inches. Mazda’s CX9 earns fourth, with 29.7 inches of legroom in its third row.

The Highlander’s third row has only 27.7 inches of legroom. 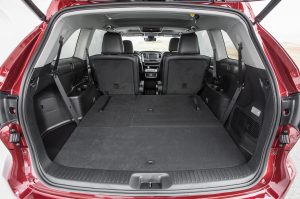 That’s tight – for adults. But if you mostly haul kids, it might be just enough – and you’ll feel less like you’re piloting the Queen Mary to soccer practice. 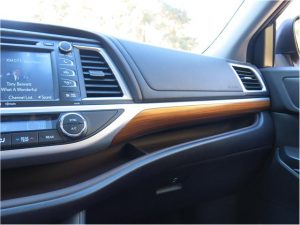 The Traverse has more room than all of them: 23 cubic feet behind its third row and a class-best 98 cubic feet in total. But you will feel like the Pilot of the Queen Mary when negotiating busy parking lots.

Inside the Highlander, you’ll find some brilliant design flourishes, such as the sliding sunroof-style cover for the center console, which lets you access the contents without having to tilt anything up (and in your way). The front section of the same center console folds open to present you with a proper Big Gulp-sized cupholder or holder for other large beverage or whatever you happen to have. 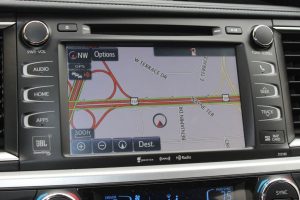 There is a storage shelf spanning almost the entire length of the dash.

The only nit is that the LCD touchscreen in the middle of the dash seems a long way away, even for the long-armed. Those not long armed may find they have to lean forward to reach the farthest-to-the-right knobs, which are well into the front seat passenger’s side of the cabin.

Luckily, there are secondary/redundant controls for most functions, such as the sound system’s volume, built into the steering wheel.

V6-equipped Highlanders come standard with an auto-stop/start system similar to the systems now abounding in pretty much all new cars. But Toyota’s system differs dramatically in one way: It only kills the engine if you push hard on the brake pedal when the vehicle stops; normal pressure on the brake pedal and the engine stays on.

This is, in effect, an end run around the annoying auto-stop/start system – which carmakers are resorting to only to placate the government, to eke out a fractional, largely theoretical mileage uptick by not idling the engine at red lights and so on. 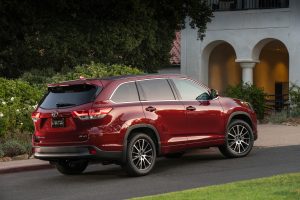 In all other cars, you have to either manually push a button to disable the auto-stop/start system or put up with the annoyance of the engine constantly turning itself off (and along with it, the AC) and then back on again during your morning stop-and-go commute.

God bless Toyota engineers for coming up with this.

If you need the room but not the size – or the turbo – the Highlander’s one you’ll want to check out.