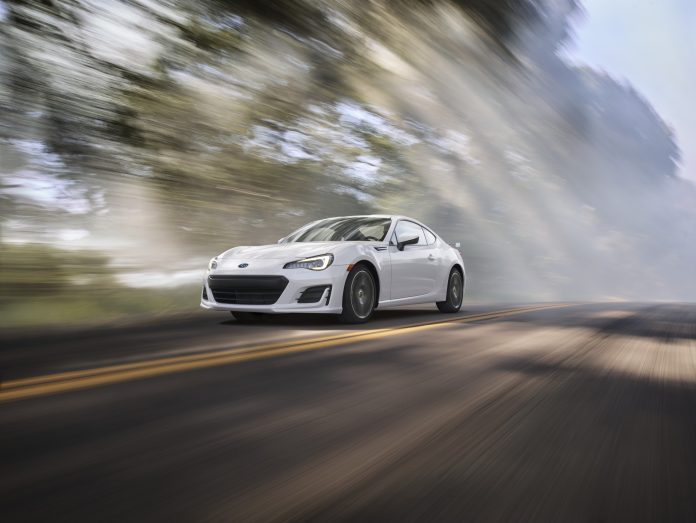 What if Porsche sold minivans?

Even if it was a really top-drawer minivan, it’d be a tough sell – because most Porsche buyers aren’t minivan buyers. Eskimos and ice.

Subaru people like cars with more than two doors – and the engine’s power going to four wheels. 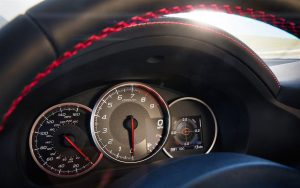 The BRZ has not much of either.

The BRZ is a rear-drive sport coupe jointly developed with Toyota – which had been selling its version (basically the same car) through its Scion small car division as the FR-S. 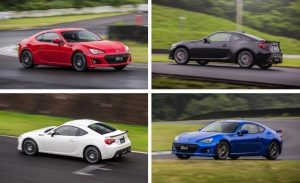 When Scion folded last year, Toyota folded the FR-S into its model lineup as the 86 coupe – and finds itself in the same position as Subaru: Trying to figure out how to sell a type of car that most of its traditional buyers – Corolla/Camry/Prius/Avalon people – don’t get and generally don’t get.

That doesn’t mean either of these cars isn’t desirable. They are, very much so. They’re just fish out of water.

Sales of both the BRZ and its Toyota-badged twin are dead in the water. About 400 a month for Subaru so far this year  – which is about half what they were three years ago.

The Toyota-ized version is doing a little better, but not a whole lot. 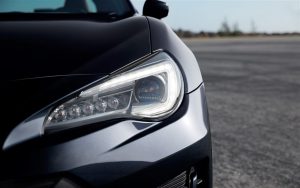 But this is probably good for people who do get it and are interested.

Odds of a good deal are high because dealers – whether Soobie or Toyota – will be grateful for the business.

Prices for the BRZ start at $25,495 for the Premium trim with six-speed manual transmission. The next-up Limited trim – $27,645 – adds luxury amenities such as climate control (rather than manual) AC, suede and leather trim, an upgraded gauge cluster and the option to buy a newly available Performance package that includes upgraded Brembo brake calipers, performance shocks and a more aggressive 17-inch wheel/tire package.

Prices crest at $29,695 for the Series Yellow – also new for 2017. It includes the Performance package along with a unique-to-this trim yellow/black interior palette. 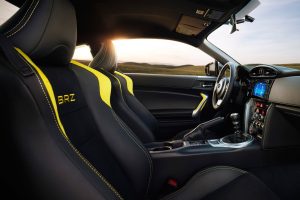 And, of course, the Toyota FR-S, which is mechanically identical – both cars have the same Subaru-sourced engines – and looks almost exactly the same, too.

The 86’s prices start out a little higher – $26,255 – but you can get it with an automatic transmission (if you must) for $26,975 while Subaru restricts that option to the higher-priced Limited trim, which stickers for $28,475 so equipped.

Both cars get a refreshed exterior and interior plus a 5 more horsepower (for manual-equipped versions) from the Subaru-built 2.0 liter flat-four engine. A hill holder clutch also comes standard in manual-equipped models and all trims get LED headlights.

The hard top will never fade and dirtbags can’t break into the car with a knife – unlike the sun-and-dirtbag-vulnerable soft-topped Miata. (The new targa-roofed Miata RF is less vulnerable – but much more expensive.)

It has back seats.

Four people in this car isn’t likely. But three – one of them sitting sideways in back – is doable.  Such is not possible in the two-seater Miata.

It is a sports car. Meant for people who know how to drive fast in the curves.

It may not be around for long.

Only a few thousand have been made so far all told –  and if the car gets cancelled next year or the year after, replacement parts – especially trim pieces – may get hard to find soon afterward.

Miatas have been around since the late 1980. Almost 1 million of them have been built so far – with no end to production in sight. It will probably be easy to find any part for a Miata thirty years from now. 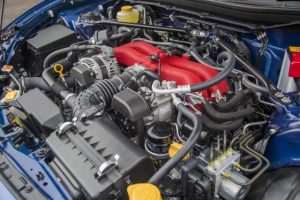 The first thing you notice when you raise the BRZ’s hood is that there’s no ugly plastic cover covering everything up.

You can see the engine itself.

Subaru – which makes the engine for both the BRZ (naturally) as well as the “Toyota” 86 – even went the extra mile and applied a racy-looking (and heat-dissipating) red crinkle-coat finish to the 2.0 liter four’s intake tubes. This kind of thing used to be common back when people cared about what was under the hood and were interested in how it looked.

It was a matter of pride to pop the hood and show off what you had. The BRZ is one of the few new cars that gives you that option – and it’s standard.

Not just a neat-looking engine, either.

Though fuel-injected and computer-controlled, the Subaru boxer four produces a magnificent pre-computer moan when you call up all 205 of its available horsepower (five more hp than last year’s version – but only manual versions; if you buy the automatic, you get the same 200 hp rating as last year).

It is an almost Quadrajet moan.

The BRZ’s engine is special in another way, too.

The only other sports car that has one of these costs a lot more than $25k-ish to start. 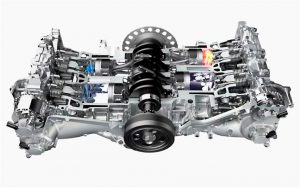 Both are boons to handling.

The BRZ’s engine is also unique to the BRZ  (and FR-S). It is the most powerful naturally aspirated (no turbo) engine in Subaru’s inventory. 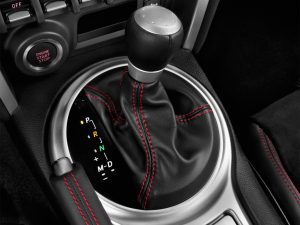 It gets to 60 in about 6.2 seconds with the six-speed manual; automatic versions take a few ticks longer – being disadvantaged by a bit less power (200) and the hi-revving boxer engine’s need to spin to make both power and torque.

With the manual, you can goose the engine with your foot and feather the clutch with your left. With an automatic, all you can do is floor it and wait for the engine to get up into its powerband. 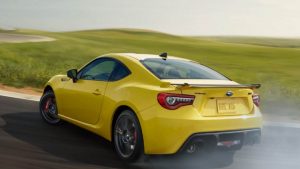 Despite its engine producing less horsepower, the Miata is dead-heat quick as far as 0-60. And because the torque peak of its engine is almost 2,000 RPM lower down – and there’s almost 500 pounds less mass to get moving – the Miata gets moving with less apparent effort. Half throttle will give you the same forward progress as three-quarters throttle in the BRZ.

You’ll find the Miata’s more agreeable in the commuter car role because of this – and it probably accounts for a lot of the car’s success. 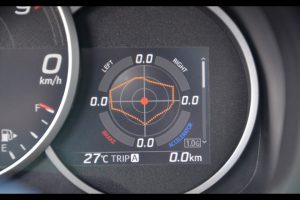 On the other hand, the unfixed Tomcat qualities of the BRZ have their own appeal.

It feels more like a track car made street legal than a street car that is a great track day car (as the Miata is). The BRZ’s 7,400 RPM redline engine begs for daily Italian Tuneups – pedal to the metal, bumping off the rev limiter.

You know, to clear the carbon off the plugs.

It is geared (4.30:1 cogs in the Torsen limited slip diff) such that 70 MPH equals about 3,100 RPM in sixth gear – at steady-state cruise. The engine never feels – or sounds – like it’s taking a siesta.

But don’t misunderstand. The BRZ is not a Subaru version of the old Honda S2000 – which was a screamer up high but had nada down low – making it a track-day car that was terrible on the street. 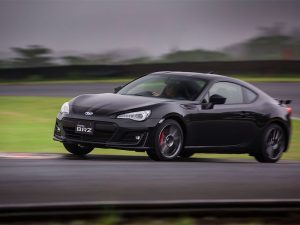 The BRZ is commuter-car viable and in some ways more so than the Miata because the Subaru does have back seats and that effectively doubles or even triples its Stuff Carrying Capacity vs. the two-seater-only (and tiny trunked) Miata. Take it to work – and stop by the store on the way home. Without having to go by yourself to leave room for a couple bags of groceries.

But the main thing to know about both the BRZ and the Miata is that they are cars for people who like to drive fast in the curves. These are not blunderbuss big-engined muscle cars  built mainly to show off how quickly they can burn through the quarter mile. They are sports cars – built for heeling over at top speed, pirouetting around the cones of an autocross course. 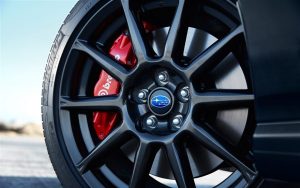 The optional Brembo brakes (four piston calipers up front) are worth the cost of the Performance package all by themselves. Zero fade even when worked mercilessly on mountain switchbacks and consistent, positive pedal feel.

In Track mode – new for 2017 – the stability/traction control fade away to nothing and you can make full use of the car’s abilities, including tail-out drifting through the sweepers.

And there is a pull-up emergency brake . . . no bootleg-turn-useless electronic parking brake.

Both the BRZ/FR-S and the Miata have relatively small wheel and tire packages – 17s for the BRZ/F-RS – and this gives lighter steering feel and quick response to inputs, even if the maximum grip threshold is a bit less than it would be if the car were fitted with the now-typical 19 and 20-inch streamrollers that most performance cars have. 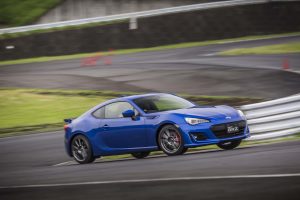 But remember: These two (three, if you include the FR-S) are sports cars – and that is a different thing entirely.

They are modern Spitfires, latter-day MGs. If you like them, you’ll love these.

Both the BRZ and the FR-S are hardtops – and have back seats. The Miata has a soft top (non RF models) and no back seats (all models). 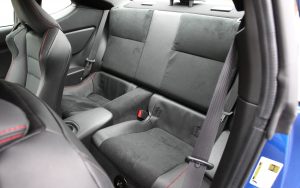 If you don’t like convertibles – and like the idea of being able to carry at least two passengers – the BRZ (and FR-S) have the advantage.

But don’t imagine you’ll carry three passengers in the BRZ, this “two-plus-two” business notwithstanding. There is literally no leg room – and hardly any daylight – between the backs of the driver and and front seat passenger buckets and the rearseat cushions. The only way anyone who isn’t legless can sit back there is to sit sideways – and that means two-plus-one.

But it’s one more than the Miata. 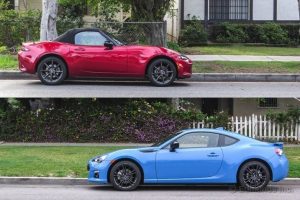 Which is also the smaller car overall – 154.1 inches long vs. 166.7 for the Twins. That’s a solid foot and change. It allows for the BRZ’s back seats – and larger trunk (6.9 cubic feet vs. a hilarious 4.6 for the Miata; some gloveboxes are larger). But on the other hand the Miata’s got the drop on the BRZ and FR-S when it comes to slipping into really tight spots.

And not just parking spots.

Being a foot less long means being able to make use of tighter gaps in traffic. Both cars are excellent tools for playing Frogger – but the Miata is better suited by dint of being the more compact of the two. 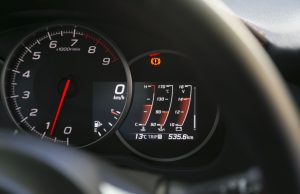 In addition to the handsome exterior tweaks – new nose clip with standard (all trims) LED headlights and a standard aluminum rear spoiler – the interior has been classed up with nicer materials (including stitched/fitted leather dash pieces) and – in Limited and Series Yellow versions – an upgraded gauge cluster with a 4.2 inch LCD display to the right of the tach. It shows G forces, lap time, pedal position, steering angle, braking force applied – as well as a digital voltmeter/oil-and-water-temp bar graph readout. 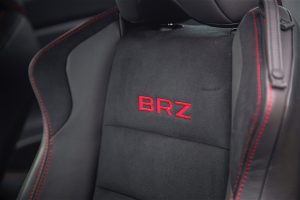 In addition to having back seats, you can fold the BRZ’s back seats forward – creating a large pass-through to the trunk area and room enough to carry four spare wheels plus a helmet and other such track day necessities.

The Miata needs a chase car (or chase SUV).

One  thing the BRZ hasn’t got is a bevy of electronic saaaaaaaaaaaaaaaaaaaaaafety nags. Just the seat belt buzzer, if you can imagine that. And traction/stability control that you can easily turn off by pushing a button. That’s it. No dinging/flashing ensemble of Lane Keep Assist/Steering Assist/Automated Braking/Park Assisting/Blind Spot Detecting/EyeSight idiot-proofing that afflicts other Subaru models. 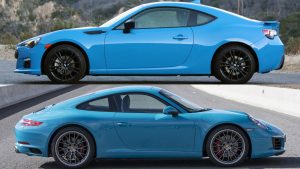 The BRZ assumes you know how to drive (as does the Miata). Unfortunately, cars like these are going the way of big four barrel carbs and lawn darts.

If you want one, better hurry.

If the BRZ (and FR-S) were being sold through Porsche stores, they’d probably be selling a lot more than few hundred of them a month.