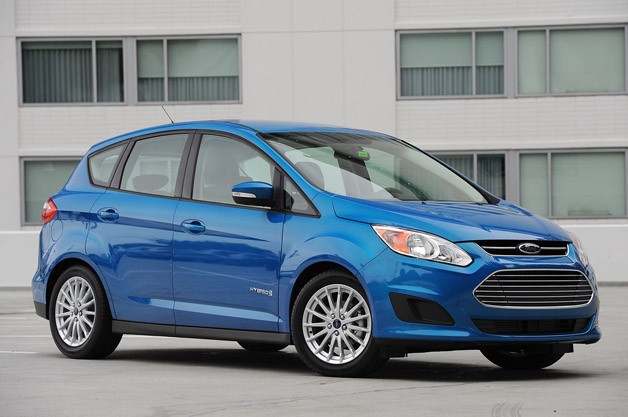 Toyota should be worried. 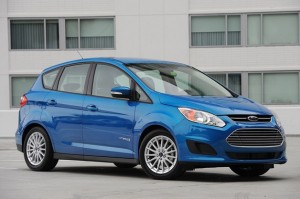 For the first time since the Prius hit the streets more than a decade ago, there is another hybrid that’s arguably a better hybrid. Because it’s a different kind of hybrid.

It’s stubby – but tall – which means it’s got more room inside than the standard-issue Prius sedan. But it’s not as long as the Prius V wagon – so it’s more maneuverable in tight confines.

Plus, it’s quick – and speedy – two things no Prius is. 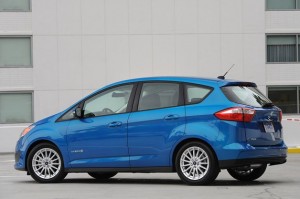 The snarky Ford hybrid also averaged 36.6 MPG with me driving it. With you driving it – and not driving it at a steady 80 on the highway and up and down 9 percent grades out here in Hillbilly Land – reaching the EPA rated 47 MPG average should be absolutely doable.

As OJ used to say, look out! 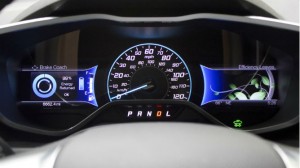 The C-Max is Ford’s answer to the Prius – and a more fuel-efficient alternative to non-hybrid small crossovers.

It’s slightly smaller end to end than a regular Prius, but taller-roofed and more spacious, with 54.3 cubic feet vs. 39.6 cubic feet of total cargo capacity, plus more head and legroom for passengers.

More importantly, it moves when you push down on the gas pedal.

Its EPA rated 47 city/47 highway (47 average) isn’t quite as high as the 51 city/48 highway (50 average) the Prius hatchback delivers – but it’s close. Ford is banking on the notion that there are lots of people out there who won’t object to sacrificing a few MPGs in exchange for a lot more fun – in a more aesthetically and functionally attractive package. 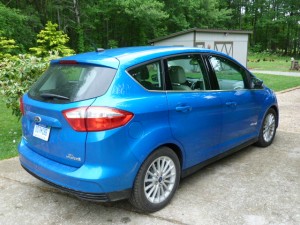 A Prius C – which starts at $19,080 – is the bargain of the bunch, but it’s much smaller inside and outside and slower than Forrest Gump after eight bong hits (11.3 seconds to 60). 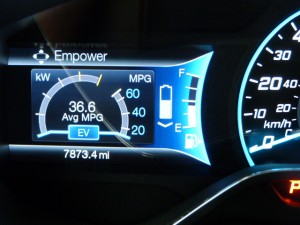 Another potential cross-shop is Honda’s Insight hybrid – which like the Prius C is more affordable ($18,600 to start) but it’s also much lethargic (0-60 in 10.3 seconds) and  has much less room inside (especially in the back seat area). 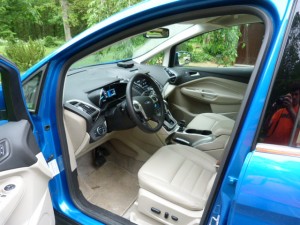 It’s much quicker than any Prius.

It’s much more fun to drive than any Prius.

It still gets almost-Prius gas mileage.

Tremendous headroom; this is the Tall Person’s Hybrid. 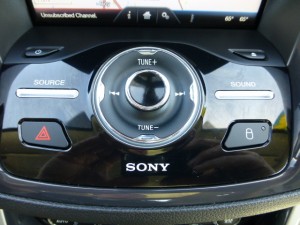 Hump (for the batteries) in the cargo area.

A lot pricier than Prius C.

Not as roomy inside as Prius V.

Some secondary controls (audio system) are over-teched and clunky to use.

The C-Max is like the Prius and other hybrids in that it has a tandem gas-electric drivetrain (2.0 liter gas engine/ electric motor) and can be driven for short periods on battery power alone in order to save as much gas as possible. But it differs from the Prius – all versions of the Prius – when you push down on the gas pedal. Because it goes. The C-Max can reach 60 in about 8 seconds – easily two seconds sooner than the quickest Prius (the hatchback sedan) and three-plus seconds quicker than the slowest Prius (the Prius C). 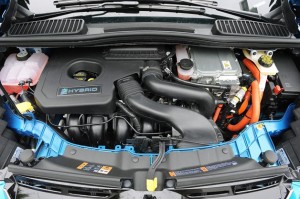 It also has a startlingly high top speed.

No hybrid that’s not a high-performance luxury hybrid – with an MSRP twice or more higher – can touch the C-Max when it comes to performance. It outruns most non-hybrid economy cars, too.

Or at least, keeps up with them.

And though the Ford’s mileage isn’t quite as high as that delivered by the regular Prius or the smaller-sized Prius C, it’s only 3 MPG less overall. And it’s better – by 5 MPG – than the Prius wagon (42 average). 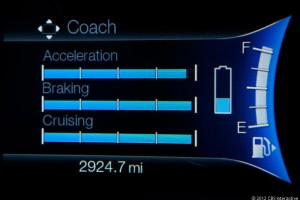 Interestingly, the C-Max is quicker than the Prius – a lot quicker – despite being a lot heavier. It (the Ford) weighs 3,607 lbs. – vs. 3,042 lbs. for the Prius. But the C-Max compensates for its weight with horsepower – which it has in abundance relative to the Prius: 188 hp (combined output) vs. 134 for the Prius sedan (and wagon)

All that scoot – enough to easily spin the tires, if you like that sort of thing – flows through a continuously variable (CVT) automatic. 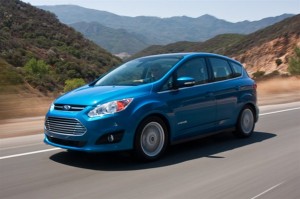 Ford says the C-Max Energi is capable of 100 MPG”e” – the combined electric-operation/gas-operation mileage potential of a plug-in. This is slightly better than the plug-in Prius’ 95 MPG”e” – and a whole lot faster.

For once, this will be easy. Telling you about what makes this Ford different, that is. All you have to do is floor it. You will immediately understand.

The C-Max is a muscle hybrid!

It blows the Prius in the weeds. It has an unmentionably high top speed (trust me). The roll-on power – i.e., what happens when you punch it from say 30 MPH or so to get around a dawdler up ahead – will literally startle you the first time you feel it. You will be at 80 – or 90 – in the time it took you to finish reading this sentence. Really. It is that strong.

And yet it still comes within a handful of MPGs of the limpy-gimpy Prius. 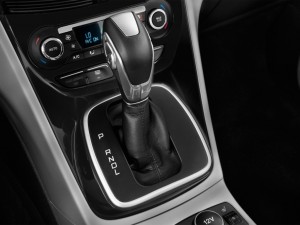 It’s not just the C-Max’s hybrid drivetrain’s power, either. The Ford’s CVT shifts sharply – when you need it to – which is most unlike the softly calibrated unit in the Prius. And there’s a real automotive shifter on the console – not a video-game toggle on the dashboard.

The little 2.0 engine even sounds slightly gnarly when aroused. And it never feels strained. It doesn’t make “sad noises” (my wife’s description) as the Prius – especially the under-powered Prius C – does when trying to accelerate.

That goes for handling – cornering – too. I was able to truck down Bent Mountain – a series of S turns descending 3 miles down a 9 percent grade – at 60 (the recommended speed is 35 in these curves) without really pushing the car’s limits. Some tires squeal, yes – but that’s because the C-Max (like all hybrids) is fitted with tires designed for low rolling resistance, not high-g cornering.

And even without them, the C is much less lurchy than the Prius – and much more amenable to a faster pace.

It doesn’t have that top-heavy – or clumsy – feel that has (up to now) typified the Hybrid Experience. You will only notice the weight of the lithium-ion battery pack and electric motor if you jerk the wheel suddenly at high speed (or mid corner). And even this deliberate provocation doesn’t destabilize the car; you just get a momentary reminder of physical laws as the center of gravity shifts a bit toward the outside of the curve.

Yet the C-Max handles better than a Corolla – and accelerates like a Corvette in comparison. 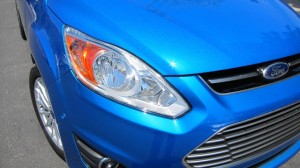 Just as it doesn’t drive like a typical hybrid, the C-Max doesn’t look like one, either. That may be because in Europe, the C-Max isn’t a hybrid. It’s been sold over there since 2003 – as a small-ish, sporty-ish tall-roofed runabout/minivan (the original 2003-2010 model shared a platform with the Mazda5) powered by gasoline – and turbocharged gasoline – engines. 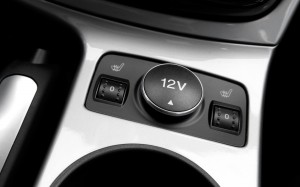 Someone at Ford Europe probably had an epiphany: You know, we have this neat little car that’s got some spunk, is very space efficient . . . it’d make a helluva basis for a hybrid with some heart. We could save a bunch of money by using an existing platform – and it’d give us a hybrid to go up against the Prius that appeals as much to the heart as to the head. . .  .

And, there you are. 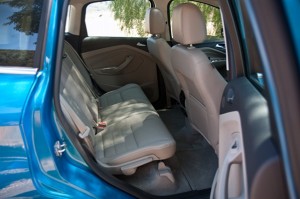 Keep in mind that the C-Max almost matches the Prius’ fuel economy – and whups it upside the head when it comes to performance.

Plus, neither the standard Prius nor the Prius wagon looks snarky. The C-Max does. On that count, the downsized Prius C can hang. It’s very cute. But its also very small – and very slow. 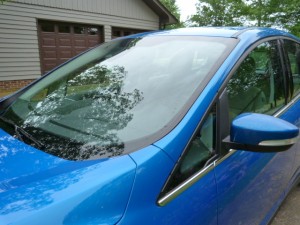 The C-Max has another quality fewer and fewer new cars have – excellent visibility all around you. The huge windshield – which projects far forward of the dash, with fixed-in-place quarter windows ahead of the front door glass – creates a greenhouse effect. The only downside is that on sunny summer days, the sun broils the dashpad – and makes the AC work hard to keep the car cool. I think it’d be cool if Ford made it so those quarter-windows could be opened. Like wing-vents, back in the day. Then you’d get free airflow at highway speeds – and maybe not even have to use the AC at all. 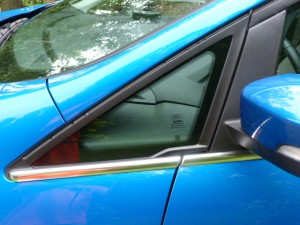 A panorama sunroof is optional – as is a “hands free” opener for the rear liftgate. Just swipe your foot underneath the bumper and it’s open sesame. The optional seat heaters are (part of the Winter package) are superb.

One little “tell” about the C-Max’s non-hybrid origins is evident in the cargo area behind the back seats. There’s a hump that eats up space (it’s there to make room for the battery pack). This means there’s a bit less cargo space behind the back seats than in the Prius hatchback (19.2 vs. 21.6) and also that the load floor is not flat when you fold the backseats down. This means it’s not as easy to slide large objects into the cargo area. However, this deficit is made up for to an extent by the C-Max’s taller roofline, which allows it to cart some things (like a bicycle, for instance) that the Prius can’t. 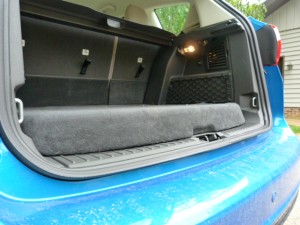 You’ll have to decide for yourself whether having more total space – and a taller opening – is worth more than a flat floor and less total space.

I really like Ford’s capless fuel filler system; just open the fuel door and insert the nozzle – no need to futz with a screw-in cap. The growing (and shrinking) leaf display on the right side of the gauge cluster is kind of neat, too. It coaches you to drive more economically by growing new leaves if you’re doing it right – and shedding them if you’re not. There are also scrollable LCD tutorials and instant/trip/average MPG displays off to the left. A 120 MPH speedo sits in between – and (trust me) it’s there for a reason. 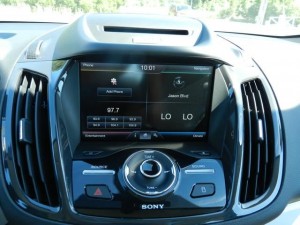 I’m less enthusiastic about the C-Max’s audio interface, which I found impenetrable at first and eventually just cumbersome. The touch-screen buttons for station selection are too small – and mounted too low (bottom left of the screen). They are not easy to touch – or easy to touch accurately. There is a secondary mouse-like input just ahead of the screen, but because the screen is mounted high up on the dash, the mouse input is also mounted up high – forcing you to raise your right arm to fiddle with it in a way that’s not particularly natural or comfortable. The optional MyFordTouch voice-recognition system lets you end-run some of this, but only after programming it and then learning how to use it. 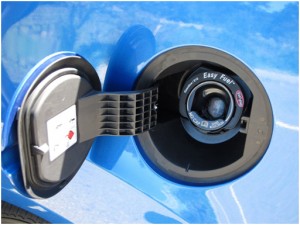 The clunky, user-unfriendly audio controls are my main beef with this car – and one of the very objective areas where it is clearly inferior to the Prius.

That aside, this one’s a winner.

Until now, hybrid buyers faced a kind of Hobson’s Choice: Buy a Prius – and enjoy great gas mileage. But accept The Slows – as well as the baggage that comes with owning an Al Goremobile. 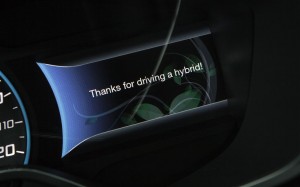 The C-Max offers almost everything the Prius is. . . and a whole lot of what it isn’t.

Turn Your Back This Fourth of July