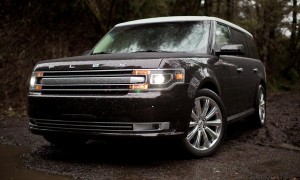 Custom vans are coming back. Well, one custom van is back. The Ford Flex. Ford doesn’t call it a custom van – or any kind of van at all. And maybe it won’t do a smoky burnout like Mr. T’s  A Team van – because it can’t (being FWD/AWD). But with the Taurus SHO’s 3.5 liter, twin-turbo, 355 hp V-6 under its hood, it’s probably quicker than Mr. T ‘s emissions-strangled, late disco-era van was – smoky launches or no.

Most important of all, it’s not a minivan – or (heavy sigh) yet another a “crossover” SmooVee.

Or at least, something different for a change. 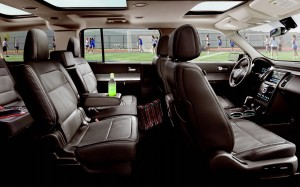 The Flex is an interesting alternative to traditional minivans and crossover SUVs. It offers comparable everyday interior space and utility – such as three rows of seats, seven-passenger capability and available AWD. But unlike a traditional minivan, it’s not a soul-sucking kid-carter.

And unlike a crossover SUV, it’s not a dime-a-dozen, look-alike, me-too-mobile.

Prices start at $30,900 for the SE with FWD and 3.5 liter V-6 without turbos.  SEL and Limited trims are the step-ups, with AWD an available option.

At the top is the Limited “Ecoboost,” which comes with the 3.5 liter V-6 flexing a pair of sequentially staged turbos and 355 hp. AWD is standard, too. 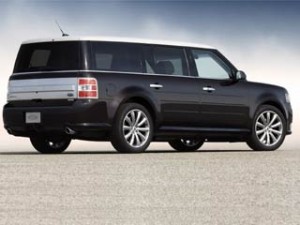 The base non-turbo engine now produces 285 hp – vs. 262 previously. An even more custom-looking “smoothed” exterior is also new – as is the latest version of Ford’s MyFord electronics interface, available automated parallel parking system and ventilated seats on the inside. The “kitchen sink” Titanium trim has been dropped, but most of the Titanium’s features are now available a la carte or as part of other packages.

Gas mileage is improved slightly, too – even though the base V-6 is is now more powerful than it was before. 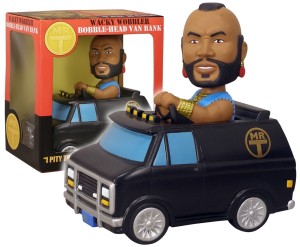 Available second-row fridge only holds about a six-pack. 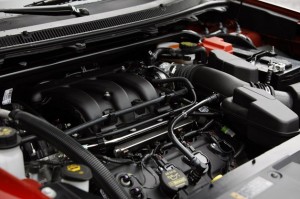 The problem? The Flex is  a hoss – more than 4,500 lbs. empty. Before anyone gets on board. With driver and just one out of six potential passengers inside, a Flex will weigh close to 5,000 lbs. 262 hp isn’t gonna cut it, either performance-wise or economy-wise. So, Ford upped the output and reduced MPG-sapping parasitic drag on the engine by eliminating the formerly engine-driven power steering pump. It’s electrically assisted now. Result? 18 city and 25 highway – and 0-60 in 8 seconds or so.

This is good enough to render the twin-turbo “Ecoboost” V-6 an option – not a mandatory upgrade, as it was before.

Speaking of the Ecoboosted V-6: 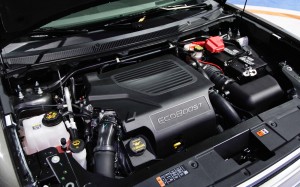 This engine features direct injection as well as a pair of turbochargers; one for low-speed boost, the other for higher RPM boost. The result is a consistent, big-engined surge of power throughout the engine’s operating range – without the sudden peaks (and valleys) that are common with small displacement (and single turbo) turbocharged engines.

It is is pretty much the same engine used in the current Taurus SHO and it delivers SHO-like performance, even in the much heavier the Flex: 0-60 in about 6.5 seconds.

The Ecoboost V-6 is paired with a performance-calibrated six-speed automatic (with paddle shifters) and an all-wheel-drive system capable of kicking 100 percent of the engine’s output to either the front or the rear axles. The ratio varies according to wheelslip, with the system automatically transferring power away from the slipping wheels to those that aren’t. This is what you want for both maximum acceleration (no wastage of potential forward thrust through spinning/smoking tires) and for high-G cornering and also for adverse weather driving.

Surprisingly, the twin turbo V-6 gets good gas mileage – given its output and given the beefiness of the Flex: 16 city, 21 highway. That’s only slightly worse than the standard V-6 despite the turbo’s much higher output and superior performance capability.

Also practical is the Flex’s ability to pull stuff.

Maximum towing capacity is 4,500 lbs. with Class III hitch – about 1,500 pounds more capacity than most mid-sized (and even full-sized) cars – and only about 1,000 pounds less than a typical truck-based, mid-sized SUV with a V-8. 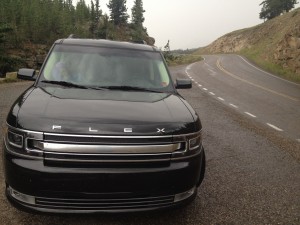 The Flex has a fairly wide-tracked stance (the distance between each pair of tires, side to side) which along with a long 117.9-inch wheelbase (only about 1 inch less wheelbase than a full-size Expedition SUV) imparts a limo-like ride – while the flat hood and upright glass all around provide generally good visibility forward and to the sides. An available back-up camera helps with the rear-view. People with shorter legs or less than great knees will like the tall, wide-opening doors, low step-in height and the excellent access to the second and third row seats.

The Limited’s 355 hp engine is just the ticket for A-Team style getaways. This thing is an SHO in sheep’s clothing. Which is a beautiful thing, because almost no one expects it – or sees it coming.

And then, you’re gone.

It’d be big fun if Ford made the Ecoboost engine available without AWD. Early ’70s Eldorado-style FWD burnouts would be easy, then.

Mr. T would be pleased. 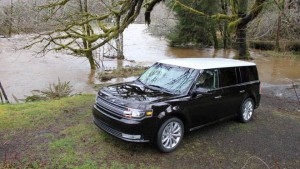 And unlike Mr. T’s RWD van, the AWD Flex isn’t afraid of the wet – or the snow. Or rather, you won’t be. Because you’re not going to get stuck.

I spent a week in a Flex Limited with AWD . It arrived a day before we got a couple inches of  wet, heavy snow topped by  a crust of freezing rain. I expected  the Flex, with its lowered ride height and – in this case – 20 inch wheels (and not-for-snow tires) to be rendered as helpless as Ned Beatty among the Edentulites. But Jim Dickey be praised, the thing made it up Bent Mountain – which is no small thing. Bent Mountain is about four miles of “S” curves ascending from about 600 feet above sea level to 3,200 feet by the time you get to the top. It’s big fun when it’s dry – and a mighty challenge when it’s covered with a couple inches of nature’s own Slushee. I gripped the steering wheel firmly and hit the gas. The Motor Gods were with me; the Flex kept moving forward. Some countersteering was necessary, but as long as I kept my foot in it (the secret to success in snow is maintaining momentum at all costs) upward and onward progress was maintained.

And I made it home. 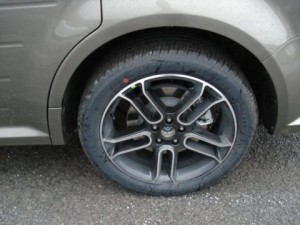 Given the poor-weather limitations imposed by this particular’s Flex’s 20 inch wheel/tire package (17-inch rims are standard on the base FWD SE, 19s come standard in Limiteds, 20s are available optionally; you can also order a 17-inch wheel package with winter/all-season tires) and the chopped down ride height, I have no doubt the regular Flex – with more clearance and especially when fitted with the available 17-inch wheel/tire package  – would be even more adroit in the snow.

The truth is that an AWD (and even FWD) vehicle with the right tires – in the right hands – will go almost anywhere, in almost any conditions, a 4WD truck will go.

The main thing is – keep moving. Don’t lose your momentum. That doesn’t mean drive at stupid speeds. It means don’t stop, if you can avoid it. It is much easier to keep on moving when you’re driving in the snow than it is to get moving again after you’ve come to a complete stop while driving in the snow. 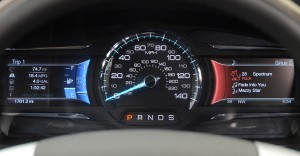 People who hate on new cars for having no soul or individuality haven’t seen the Flex.

Check out the grooved side-panels, the optional multi-panel Vista Roof, capless fuel filler, the foot rests for the second row passengers – and the available party time mini-fridge between the two second-row seats.

The Vista Roof has tilt and slide main sections and fixed rear glass sections with privacy shades. You get air and natural sunlight throughout the interior. The mini-fridge is a great idea and it’s also one of the few such that isn’t merely a “cooler” but a real-deal refrigerator with a compressor that can chill your stuff down to 41 degrees. The only downside is it’s kind of small – it’ll only hold about a six-pack – and it takes two-plus hours to achieve full cool-down. 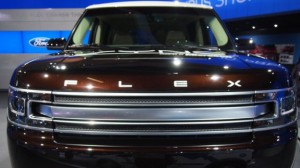 The ’13 has a new front clip with redesigned headlights and grille that are horizontally wide rather than vertically tall (as before). The big blue “Ford” oval has been shaved off, leaving just a silvery metallic bar across the grille. Above it, in thin-line, widely spaced lettering is “F” “L” “E” “X” – a very Range Rover-ish look.

Like a standard minivan or crossover you can drop and stow the second and third rows of seats to maximize cargo-carrying capacity – which totals 83 cubic feet with the second and third rows down (these also slide, allowing you to custom-tailor legroom). You’ve also got 20 cubic feet behind the third row when they’re up. This is less than the 100-plus cubic foot volume that’s typical of most current 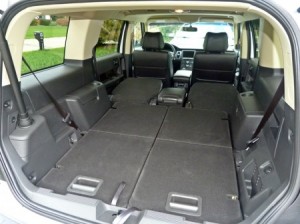 standard minivans and mid-large crossover SUVs/wagons, but it’s still a lot of space. The length (and width) of the Flex’s “bed” is enough to permit carting home eight-foot-long boards with the rear gate closed.

I know it is because I did it.

The Flex is fancy – and priced accordingly. 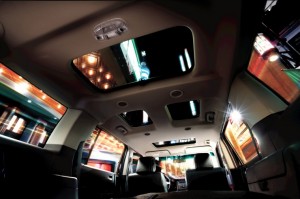 By the time you’re at the Limited Ecoboost  level, added the ‘fridge, the Vista Roof, the Captain’s Chairs, parallel park and adaptive  cruise (and there’s more yet), you are looking at a $45-50k Ford.

The recently revived (and quickly re-retired) Thunderbird got caught in this Catch 22. Most people thought it was a really neat car; very few people disliked it. It got a lot of looks. But T-birds didn’t get a lot of action at Ford stores – in many critics’ opinion because of the car’s almost-Lexus price tag but blue oval brand status.

This could mean the Flex goes the way of the T-Bird: Quiet cancellation instead of a second generation.