Here’s a video taken by me of a speeding cop:

This cop was on the median of I-581 (an Interstate spur) running radar when I passed him on my way to the motorcycle shop to pick up some parts. On my way back a few minutes later,  I came upon him again as he was just finishing up issuing a piece of payin’ paper – no doubt for “speeding” – to some poor soul whose day it wasn’t. The cop was pulling into traffic as I passed him. And within moments, he was passing me – at well above the sacred speed limit of 55 MPH. You can see the cop accelerating away from me in the left lane. I’m doing 60 – and within moments he is half a mile ahead of me. I paced him – discreetly – for about five miles before he finally turned off (to refuel at Crispy Kreme, I assume). He was running 70-plus the whole time. Not “on a call.” Not “in pursuit.” Just driving along at the perfectly reasonable speed of 70-75 MPH.

Except, he’d ticket me – or you – for doing the same thing. We’d get a $150 (or more) piece of payin’ paper and 4 DMV “demerit points” on our driving records – to be used as evidence of our “unsafe” driving habits by the insurance Mafia to justify their jacking up our premiums for the next 3-5 years (the duration a “moving violation” remains active on one’s DMV record). 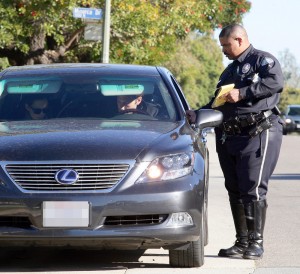 This particular stretch of road – I-581 in southern Virgina near Roanoke – is a notorious speed trap. It is an interstate highway, four lanes each direction – traffic normally (when cops are not about) running 65-70. Yet it is still posted 55. That means nearly every driver is technically guilty of “speeding” at any given time. It is a “target rich environment,” as the camo’d thug scrum might put it it.

It also means that doing 75  – as this cop was doing, or nearly doing – is almost statutory reckless driving, which is defined in Virginia as driving even 1 MPH faster than 20 MPH over the posted maximum. It’s a major bust. Mandatory court appearance – which means, better get a lawyer (minimum cost, $700 last time I checked). Because if convicted, you will receive six DMV “demerit points” and probably have your license suspended for a period of time. You will absolutely be hit with several hundred dollars in fines on top of the shyster’s bill – and that’s just the beginning.

Wait until your insurance capo discovers you have a “reckless driving” bust on your rap sheet.

The cops know it’s bullshit. We know it’s bullshit. But they will issue us tickets nonetheless and without batting an eye, much less feeling the slightest pang of empathy of conscience  . . . for doing that which they know isn’t “unsafe” – merely illegal – and which they do themselves as a matter of routine. Because, of course, they can do so without fear of flashing lights in their rearview mirrors and men in stormtrooper costumes with guns menacing them.