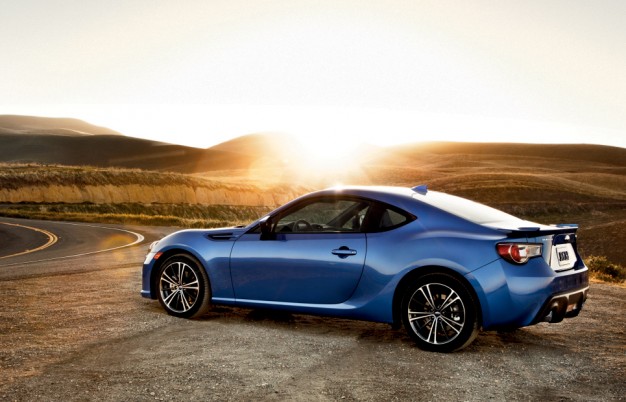 You have to work it to appreciate it. 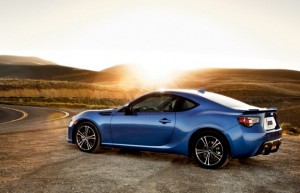 If you don’t – you probably won’t.

That’s the thing to know going in.

This isn’t a Miata.

Which is by no means a bad thing. You’ve got a different thing here.

The BRZ (and its Scion-badged twin, the FR-S) are full-tilt cars. Run the growly little boxer engine up to the rev limiter, grab a handful of second, cock the wheel hard left and drift through that turn, the car’s ass just beginning to rotate but still holding the line … then straighten her out and put the hammer down. The revs build, time for third, then fourth as you buzz the 7,300 RPM redline and the upshift light flares at you around 104 MPH.

At less than full-tilt, the experience can be a little disappointing… if you don’t grok sports cars. 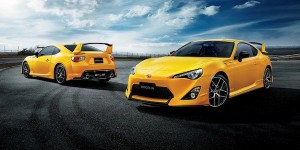 If you’re in the wrong gear at the wrong moment, the BRZ’s off its game. And whatever you do, don’t buy it with the automatic transmission.

This is a car that demands involvement … that you drive the thing.

If that’s not you, it isn’t the car for you. 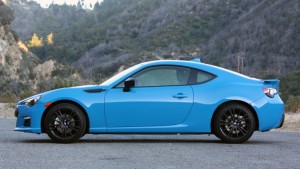 The BRZ is a compact-sized, hard-top (and two-plus-two) sport coupe jointly developed by Subaru and Toyota, which sells the same basic car as the FR-S through its Scion small car division. Both cars have identical drivetrains (including the Subaru-designed flat-four “boxer” engine) but are wrapped (and priced) slightly differently. 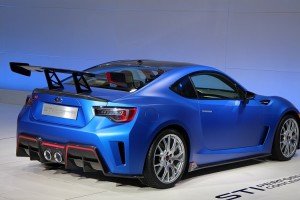 There is also a special edition HyperBlue version of the BRZ. It is painted a unique pastel blue color, with matching interior accent stitching, black powder coated wheels and other cosmetic embellishments. This version of the BRZ comes only with the manual transmission.

Lastly – and at last – Subaru has decided to offer an STi version of the BRZ. Unfortunately, it’s a very limited production run – just 700 copies – and the base price (before the inevitable dealer mark-up) is $38,995.

The BRZ STi will be reviewed separately … if I can get my hands on one! 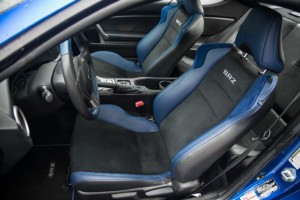 Both the BRZ and the FR-S get an upgraded LCD touchscreen and apps (each specific to the brand).

The HyperBlue and ultra-performance STi variants are new for 2016- and unique to the Subaru. The Scion-ized version isn’t being offered with a turbo or AWD (yet) and there are no special editions.

A car that begs to be driven.

Six-speed shifter’s action is as tight and right as a custom .45 Kimber’s.

The tension on the emergency brake handle is set so you can lock up the wheels and do bootleg turns.

Has back seats; Miata doesn’t. 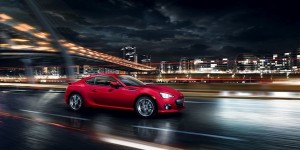 A car that needs to be driven.

Back seats have effectively no legroom at all unless the front seats are skooched far forward – and then you can’t drive the thing.

Maybe the worst-designed cupholders in the world.

STi version is welcome – but the price tag is forbidding. 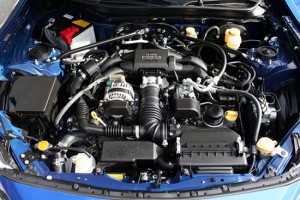 Which may be why the BRZ hasn’t been the hit Subaru hoped it would be. (And is probably why Subaru has added an STi version to the mix, even if they won’t make very many.)

Not because there’s anything wrong with the car’s layout. It’s just maybe too far off the reservation for the typical Subaru prospect.

It is a pretty peaky engine, cammed for high-RPM power. 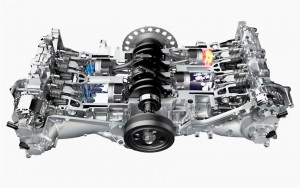 For a high-performance sports car driven full-tilt, this is exactly what you want.

But for a street car, just poking along, it’s not ideal.

Or, consider the Mazda Miata. 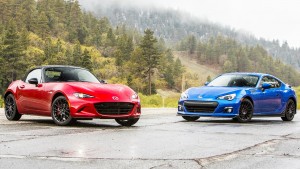 To express it colloquially, the Miata is much more wife-drivable than the BRZ.

Speaking of which: An automatic transmission is available … but re-read the torque numbers above.

Do not buy the optional six-speed automatic. 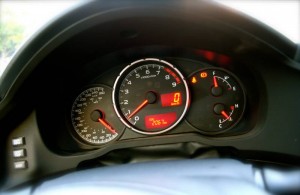 Automatics need torque to work decently and the BRZ’s four hasn’t got enough of it – and the little that’s available has to be reached for like a cookie jar on top of the ‘fridge, such that it takes the automatic-equipped BRZ a full second longer to achieve 60 MPH. The manual BRZ can do it in about 6.7 seconds, with a driver who knows how to work the engine. With the automatic, which doesn’t work well with this high-strung engine, you are looking at an 8 second run.

But this isn’t an economy car.

Note that premium fuel is required.

The more tractable Miata can be fed regular. 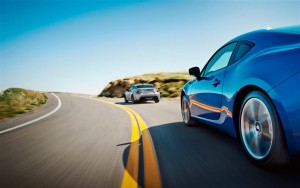 Did you ever see the Clint Eastwood movie, Heartbreak Ridge? It’s about an old Marine gunnery sergeant who does not fit well into civilian life – or even peacetime military life. His soft-handed battalion commander tells him he should be kept in stasis in a box, like a fire-extinguisher, with a sticker on it that reads: “Break glass in time of war.”

It loves to run, hates to walk. It is doable as a commuter car, but the Miata does that job better. If you don’t wind the boxer engine out in each gear, not much happens, acceleration-wise. The posted 0-60 time does not convey the everyday driving reality of the BRZ. Almost any other car with a similar number will feel pretty strong with the pedal pushed halfway down. In the BRZ, you must push the pedal all the way down – pretty much all the time.

The torque deficit is the car’s real weakness as a street car. 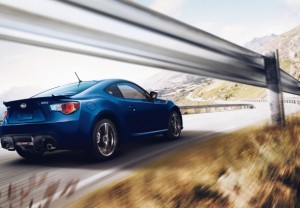 A weakness that is magnified by the car’s surprisingly high curb weight of 2,764 pounds (vs. 2,332 pounds for the Miata). Torque, a measure of twisting or rotational force, is what gets a car moving. Heavy cars don’t get moving very well without plenty of torque to turn the wheels. Combine not much torque with lots of weight and you have a problem. Especially if you saddle the thing with an automatic.

At least with the manual, you can wind the little four out and make use of what’s available. 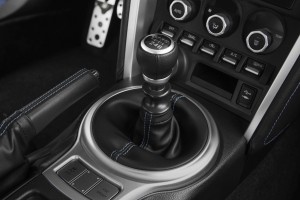 Which is all kinds of fun.

The shifter is a joy to play with, the clutch take-up just right. You sit, gunfighter-style, looking out over a sloping hood with the centerline defined by the power bulges on each periphery. A glance in the side mirror reveals the appealing curvature of the rear fender flares, 911-style.

And that’s what this car reminds me of most of all. A classic Porsche. The early 911s weren’t especially speedy – and the speed they had you had to work for. But it was mechanical marvelousness. A fusion of flesh and blood and steel and rubber. Those early 911s were for experten – people who knew their business.

So is this thing. 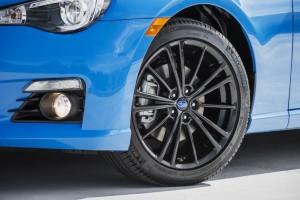 Example: The emergency brake tension is not (as in almost every other new car) set so lightly that it’s not possible to use it to lock the rear wheels up while you’re moving. Here, you can. Why would you want to do that? An experten knows why. If you do not, this car isn’t for you.

Another: The VSC/Traction control is extremely liberal when turned off. You want to drift? By all means. But know what you are doing before you push the button for “off.”

One more: The BRZ’s standard wheel/tire package is much more aggressive than the Miata’s. Seventeens and low-aspect ratio/speed-rated performance tires vs. sixteens and all-seasons. Mazda does offer more serious equipment as part of the optional Club package. But it’s optional. The BRZ is serious – as it sits. 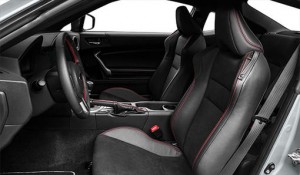 Last item: The BRZ’s Recaro-style sport buckets are track-ready seats. With side bolsters and only missing the five-point harness. They are actually comfortable, too.

And you can get them with heaters.

So it’s not that the BRZ isn’t civilized. It’s just more of an animal than the Miata.

It’s a coupe – as opposed to the Miata’s convertible. The hardtop provides structural rigidity – as well as physical protection if you roll the thing. Plus, convertible soft tops don’t age well. The fabric stains – and rips. Nature of the beast. 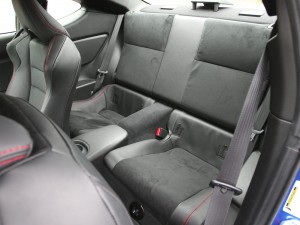 It’s also a two-plus-two (four seater) as opposed to the Mazda’s two seats. This, too, has its pros -and cons.

Obviously, you have the theoretical capability to carry more than just one passenger. And you have the actuality of some extra room for things. But, don’t be fooled. The BRZ is a two-person car with some additional space behind the front seats. The advertised rear seat legroom – 29.9 inches – assumes the front seats are pulled forward such that (taller people, at least) will be uncomfortable up there, too. And if you’re over six feet, as I am, driving the car (with the manual) will be awkward at best without the front seat slid back sufficiently to provide the necessary leg maneuvering room… which pretty much eliminates legroom for the theoretical back seaters. 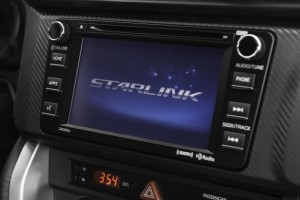 Still, it’s the more practical of the two in this respect. You get the additional storage and potential people room inside the cabin. And you get a larger trunk, too. The Soobie’s is 6.9 cubic feet vs. 4.9 for the Miata.

Of a piece, the secondary controls are large and hand-grabable, without needing to look at them. Toggles for the AC and knobs for the temperature and fan. The new LCD screen is much simpler than most, with four major menu items (Audio, Apps, Phone, Settings) and four large touch buttons to access them.

One not-practical thing about the BRZ is the center console’s cupholders – which are situated far rearward and so ideally positioned such that your right elbow is guaranteed to back into your coffee as you shift, spilling it all over. That leaves the openings in the lower door panels, which Subaru advises not be used to hold coffee cups because the slots are located such that you are likely to make a mess. Again. Basically, Subaru is telling you to drive the car – and if you want coffee, pit for 10 minutes at Starbucks. 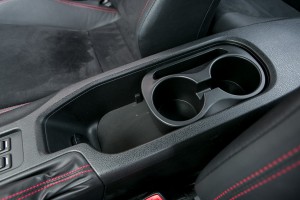 Oddly, there is no oil pressure gauge. A sports car should have that – even if Subaru believes the Boxer engine’s oiling system is failsafe.

This is, after all, a track-day car masquerading as a street car.

On the upside, the oil filter is… on the upside. Right there, on top of the engine.

You can remove it by hand, without tools. 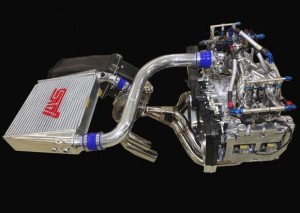 Back in 2011, when Subaru and Toyota announced the joint development of a new high-performance sports car – what would become the BRZ and FR-S – everyone thought it would upset the proverbial apple cart.

The Miata – just redesigned – is more successful than ever.

Despite having 45 fewer horses under its hood (and two fewer seats) than the Subaru/Scion twins.

But the Miata’s also carrying about 400 pounds less curb weight than the twins. Despite the Mazda being a convertible (they usually weigh more). 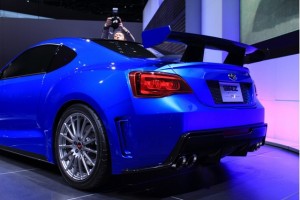 That is a problem.

Both would be great.

And it has AWD. 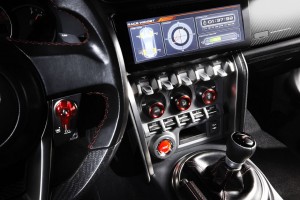 The turbo fixes the low-end grunt issue – and the AWD makes it handle even better. The problem is the price – almost $40,000 before the gouging begins. Given only 700 will be made, expect the gouging to be savage. (Have you checked what Skyline GT-Rs are going for?)

The STi’s price – and, frankly, its complexity – may be at odds with the car’s original mission. Which was to offer affordable, back-to-basics sports car performance. The BRZ is still that.

The BRZ STi, for all its charms, isn’t.

It will have to face down prestige-branded BMW Z4s, Porsche Caymans and others like that. Can it do so? We’ll soon see.

Consider it the un-Miata. A sports car you don’t buy for the trophy wife.

The one you buy for you.